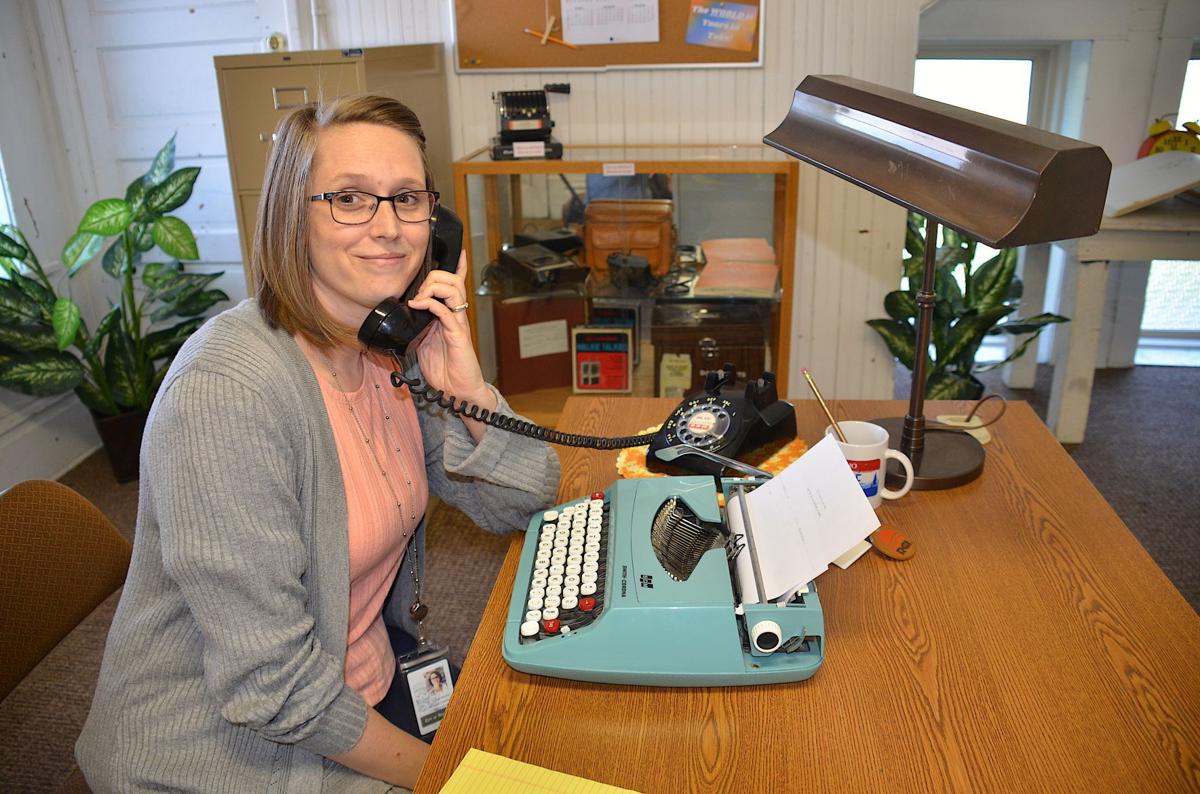 Museum of Rexburg Curator Alisha Tietjen sits at a desk inside the museum’s “Escape Room” where visitors can get a feel for what it was like for Upper Valley residents during the 1976 Teton Dam Disaster. 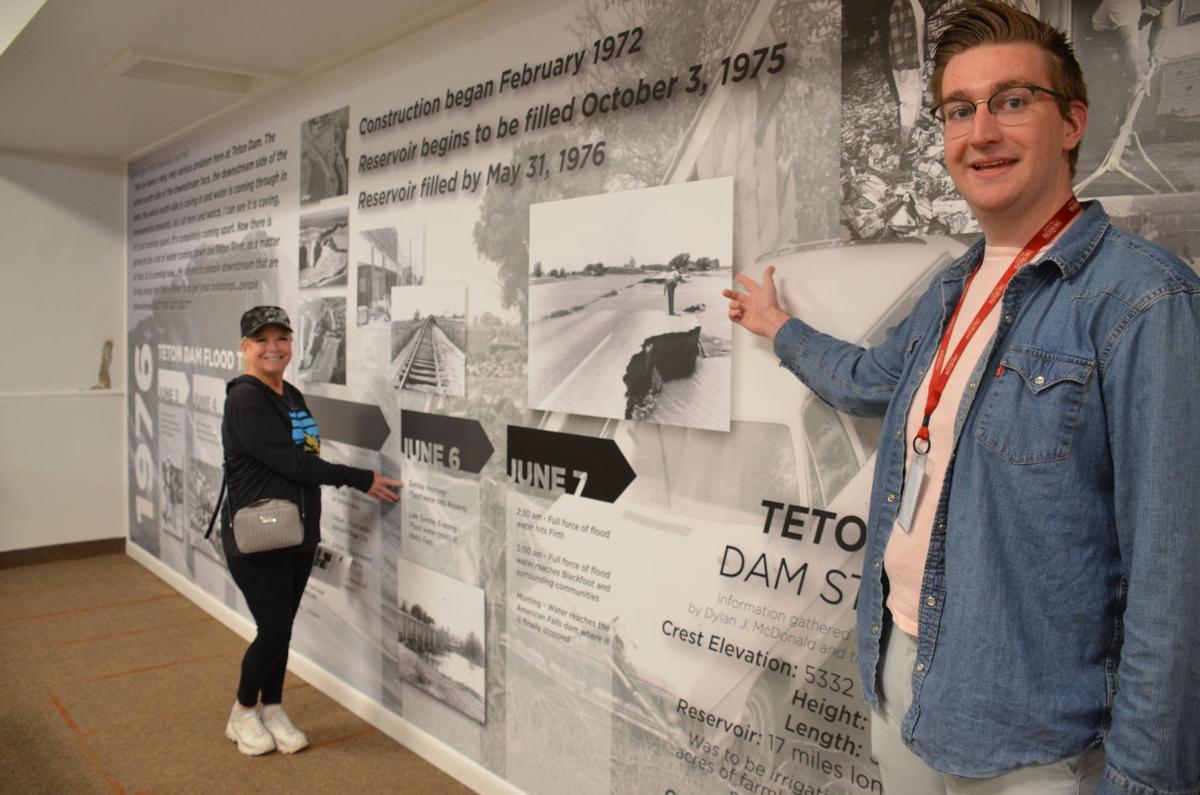 Idaho Falls resident Sydney Franklin and Museum of Rexburg Intern Josh Carmen stand next to the museum’s Teton Dam timeline at the museum. The timeline details the building of the dam to its collapse on June 4, 1976.

Museum of Rexburg Curator Alisha Tietjen sits at a desk inside the museum’s “Escape Room” where visitors can get a feel for what it was like for Upper Valley residents during the 1976 Teton Dam Disaster.

Idaho Falls resident Sydney Franklin and Museum of Rexburg Intern Josh Carmen stand next to the museum’s Teton Dam timeline at the museum. The timeline details the building of the dam to its collapse on June 4, 1976.

To commemorate the 45th anniversary of the Teton Dam Disaster, Museum of Rexburg workers have created an “escape room” where visitors can flee the disaster while also helping communities threatened by the flood.

“You have 25 minutes for your group to evacuate the towns below you and to evacuate yourself as well,” said Museum Curator, Alisha Tietjen.

Visitors will be given a series of clues on how to escape. Those visitors who make it out in record time will have their picture taken and displayed. The museum is located at 51 N. Center Street.

“You’ll have bragging rights. Our fastest group has done it in 19 minutes” she said.

While in the escape room, visitors must call someone for help, Tietjen said.

Who should they call?

“I can’t tell you that. It’s part of the escape room. Sorry. We can’t give away all of our secrets,” she said.

The expectation is that escape room visitors will get a feel for what Upper Valley residents experienced on June 5, 1976 when the Teton Dam broke sending billions of gallons of roaring waters from Sugar City to American Falls.

“It was three days of destruction,” Tietjen said.

To make the escape room look and feel like 1976, Tietjen has filled it with ‘70s era items like a rotary telephone, a typewriter, walkie-talkies and a cassette tape recorder/player.

Tietjen says that visitors have continued to be amazed that it’s been nearly five decades since the dam broke. Many will say that it seems like it happened just yesterday.

“A lot of people are coming in and telling us their stories,” she said. “We love hearing the stories. We feel strengthened that they overcame it. They were able to grow from this experience. They were resilient,” she said.

Sydney Franklin, of Idaho Falls, visited the museum on Monday and recalled helping to sandbag homes during the flood when she was about 14 years old. She recalled the sound of the roaring rushing waters and watching as those waters rose threatening the Church of Jesus Christ of Latter-day Saints Temple and the neighboring church hospital.

Franklin watched dead cattle swept down the river and witnessed water threatening a bridge as it roared through Idaho Falls.

“I was sad to see the animals,” she said. “The water was right up there on the bridge. I didn’t know if the bridge was going to (collapse) or not.”

While Franklin helped sandbag the waters, her father Jim Franklin, a pharmacist, ran around the community giving people an antivenin for rattlesnake bites. The snakes were found swimming in the floodwaters biting rescue workers.

Tietjen says that she’s heard all kinds of stories about what happened during the flood. One involved a scout group practicing emergency preparedness near the dam when they were told they were in the middle of a real emergency.

Some of the crazier stories involve dinner tables — set for dinner — floating over to a neighbor’s home and landing intact inside the living room — ready for dinner, she said.

Similar tales have been told about cakes, Tietjen said.

“There’s stories of fully made cakes — like a wedding cake — they floated up and landed and were perfectly fine after the flood,” she said.

Other visitors have told Tietjen about their families riding out the storm inside the second stories of their homes as their houses floated downstream.

“The houses came off their foundations, but they just stayed in their house until it stopped. They were luckily OK,” she said.

Of course, there was a lot of devastation and destruction. Some people barely managed to escape with no more than what they were wearing. Families didn’t know if loved ones were dead or alive for days. A total of 11 people died.

The museum has created a timeline of the dam disaster.

“The wall talks about the Teton Dam itself. It describes the events leading up to the breaking of the dam. There are stories of the local community and the areas that were hit: Wilford, Sugar and Rexburg,” said museum intern Josh Carmen.

The escape room will bring the Teton Dam story to life, Tietjen said.

“If you can make history connectable, you will make it memorable,” she said.

The escape room will be available throughout the summer for visitors. Appointments may be made from 11 a.m. to 2:30 p.m. Monday through Friday. Tickets are $6. Visitors may also visit the escape room from 6 p.m. to 8 p.m. Monday, Wednesday and Friday for $45 per group.