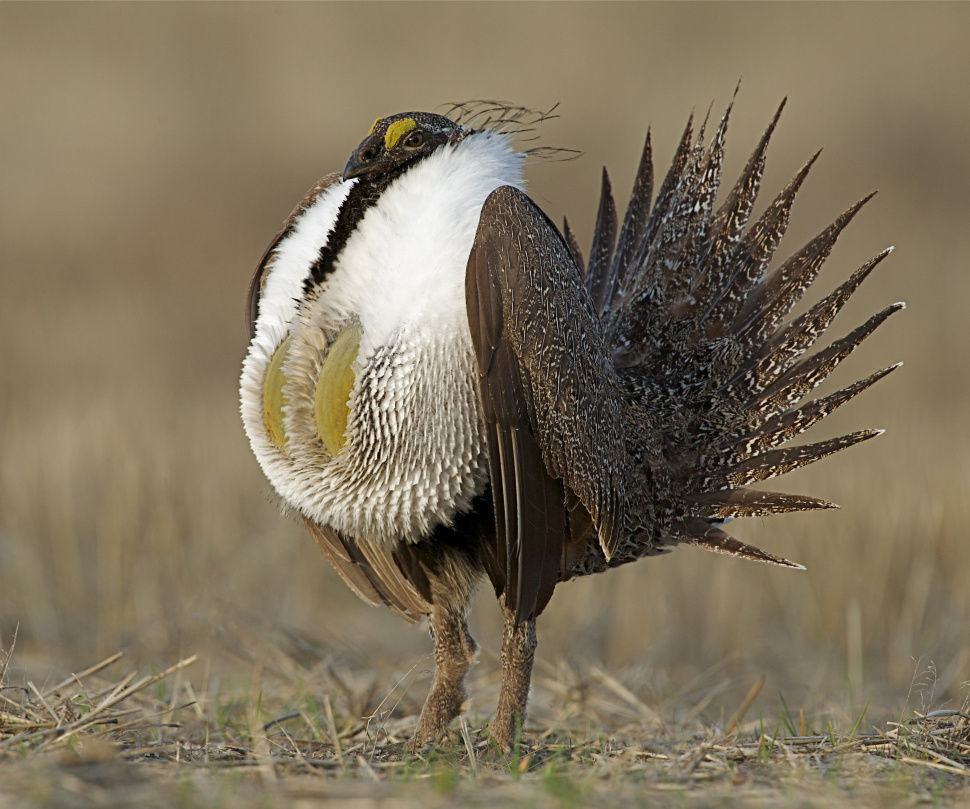 Sage grouse continue to struggle as the federal government rolls back protections. 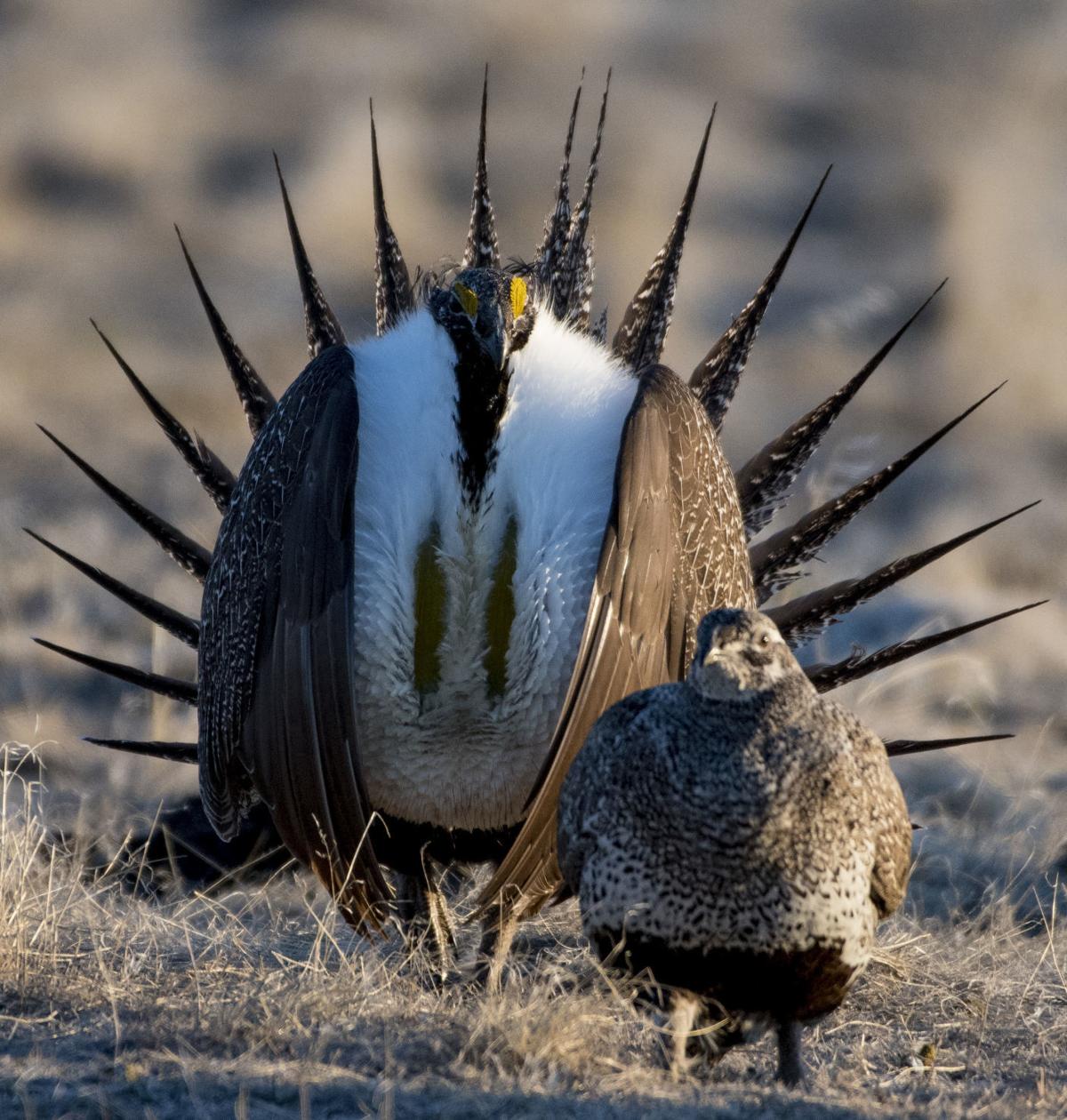 A male greater sage grouse displays for hens in sagebrush steppe habitat in the Big Horn Basin. Sage grouse will strut and fight to catch the eye of females during their spring mating rituals.

Sage grouse continue to struggle as the federal government rolls back protections.

A male greater sage grouse displays for hens in sagebrush steppe habitat in the Big Horn Basin. Sage grouse will strut and fight to catch the eye of females during their spring mating rituals.

ROGERSON — About a dozen birds fly in at about 4:30 a.m. from all directions, like a rag-tag squadron of chicken-sized helicopters.

It takes a minute for all the male grouse to arrive at the small clearing in the sagebrush. Their wings whoosh loudly in the pitch black, fluth-uth-uth-uth-uth-uth-th-th-th-t-t-t-t.

When the sage grouse land at the lek, their group breeding grounds, they start dancing. Until dawn, when the sun peaks over the snow-covered buttes and casts an orange glow over the sagebrush, you just hear this display, the bouncy, water-drop sound of the males inflating the air sacks on their chests, competing to attract females.

The spring mating ritual of this stocky, flamboyant bird is becoming increasingly rare. For the past 60 years sage grouse numbers have been declining steadily, but in the last handful of years populations across the bird’s western range have nosedived. Sage grouse numbers have always fluctuated, cyclically, but experts say that doesn’t account for the recent drops.

While leks like this one in southern Twin Falls County, accessible by rugged two-tracks and backdropped to the south by white mountains, are doing relatively well, even sage grouse in the Magic Valley have suffered big losses in the past few decades. Again and again, massive fires gobble up thousands of acres of critical sagebrush habitat.

According to Idaho Fish and Game, the state population, much of which is in the Magic Valley, dropped 52% between 2016 and 2019 — Fish and Game is still analyzing the 2020 lek count data, but Magic Valley Regional Wildlife Manager Mike McDonald said this year’s numbers are similar to 2019’s.

Experts say if protection efforts for sage grouse at the federal and state levels don’t improve, the bird faces a bleak future. Since 2016, the Trump administration has worked to roll back sage grouse protections at a time when scientists say the entire sagebrush ecosystem is under threat and the best available data suggest the bird needs more, not less, help to avoid extinction.

“There’s really no concrete evidence that they (federal agencies) are doing much other than some bureaucratic arm waving,” said Jack Connelly, a leading sage grouse expert who spent decades studying the bird as an Idaho Fish and Game biologist. “It’s pretty discouraging.”

An icon of the West

Greater sage-grouse are one of 350 species uniquely adapted to the sagebrush steppe. Today they live from Wyoming to Oregon, from southern Canada to southern Utah. The bird has been extirpated from half of its former range. In the past 60 years sage grouse numbers have dropped 66%.

Sage grouse can be both elegant and inconspicuous. On the breeding lek in spring, males fan their spiky tail feathers behind them and puff out bulbous yellow air sacs, normally hidden in their white ruffs. The females, mostly brown, are rather plain. Sage grouse are notoriously tough, spending their entire lives in the sagebrush sea and surviving on sagebrush leaves during the winter.

In the past few decades, millions of acres of sagebrush have been lost to wildfire and much more habitat has been degraded by oil and gas mining, new infrastructure and other activities. Sage grouse are highly specialized to a life in sagebrush — they can’t live without it.

There are several factors that have led to massive increases in wildfires — humans, with greater access to public lands, are starting many more fires and climate change is playing a role — but non-native, invasive species like cheatgrass are the biggest contributing factor.

When a fire decimates sagebrush habitat, cheatgrass often springs out of the blackened ground first. The species outcompetes native plants and dries early in the year, turning into thousands of acres of fuel, which often burns once more, kickstarting the cycle anew.

“In the ‘70s and ‘80s, wildfire was pretty unusual,” Connelly said. “We’d all go out and look. It just wasn’t something that occurred.”

Now a mild fire season in the Magic Valley might mean 100,000 acres went up in flames. As fire eats up habitat, sage grouse are left with nowhere to go.

Based on the best data, wildfires are going to become even more common in the future.

There are billions of dollars tied to the sage grouse’s fate. If the bird becomes endangered, a whole new set of regulations would kick in, likely inhibiting oil and gas production and other interests.

A decade ago, the U.S. Fish and Wildlife Service considered placing the bird under Endangered Species Act protections. The threat of a listing spurred a diverse group of stakeholders to work together to devise a new strategy for sage grouse conservation.

The Bureau of Land Management’s 2015 sage grouse plans, a multi-state strategy for sage grouse management throughout the West, were seen as a step in the right direction, a compromise between industry interests and the best available science. The BLM is in charge of roughly 50% of all sage grouse habitat.

But before the 2015 plans could be put into action, Ryan Zinke — President Donald Trump’s first secretary of the Interior, which oversees the BLM — began the process of amending them, saying the new plans were too burdensome on industry. Scientists and conservationists decried the move as a blatant attempt to help fossil fuel companies. Connelly says there was no scientific reason to amend the 2015 plans.

“There was absolutely no indication they used up-to-date information (when proposing the amendments),” he said. “It was like we were back in 2012, 2014.”

Since 2015, the situation for sage grouse has only gotten worse. Thousands of new oil and gas wells have been permitted and huge amounts of additional sagebrush habitat have burned.

Sage grouse were close to being listed a decade ago, and state populations have already declined by 44% on average since then.

“It’s like none of that is happening as far as BLM is concerned,” Connelly said. “Are they ignoring it, or do they truly not know what’s going on?”

In order for recovery efforts to have a chance to succeed, Connelly said, agencies have to set policies grounded in objective, scientific data. But, he added, the BLM is not making decisions based on science, and the people calling the shots on sage grouse aren’t very knowledgeable.

“When you see problems persist and just get worse over time and you’re doing your best trying to provide good information, trying to provide quality research, and not only is sometimes that research being ignored, it’s being abused …,” Connelly said. “It bothers me.”

The BLM initially succeeded in amending the plans before U.S. District Court of Idaho Judge Lynn Winmill ruled that the amendments hadn’t adequately analyzed how the changes would affect sage grouse. The bureau is still trying to get the amendments passed.

The protections that the BLM is attempting to roll back help sage grouse in multiple ways. There are seasonal timing stipulations that ensure the birds aren’t disturbed on their leks between March and April — those stipulations mean oil and gas operators and ranchers have to avoid breeding grounds during that window. There are also protections for important habitat that the BLM is attempting to ease.

Besides reducing protections, there are major problems surrounding many of the BLM’s ongoing efforts to help sage grouse, Connelly said.

For example, the BLM plans to build thousands of miles of new fuel breaks, to try and slow down wildfires. Many scientists say the program could do more harm than good. Fuel breaks typically involve new landscape disturbance and there isn’t much data to show they’re effective.

They have to be placed strategically, too, in order to avoid causing new harm to sage grouse habitat.

The BLM recently approved an 11,000-mile programmatic fuel breaks proposal for the Great Basin — that plan will guide fuel break decisions in the Magic Valley. In this case, programmatic effectively means the BLM decided on a general plan before knowing where the fuel breaks will be.

The agency is also removing pinyon pine and juniper trees in order to improve sage grouse habitat — Connelly said there’s a study from Oregon that says that could be effective, but that’s just one study and investing heavily to treat a few thousand acres might not be the greatest use of resources when hundreds of thousands of acres of desert are burning annually.

The BLM is also pushing to increase livestock grazing on public lands as a tool to reduce fuels. Some scientists say that could help, but it requires hard work and diligence from ranchers — conservation groups say if a grazing ramp up isn’t done correctly, it could just exacerbate the invasive species problem.

A few times every spring, Sarah Harris wakes up well before dawn to count sage grouse at their leks in southern Twin Falls County. She checks on a number of leks as a volunteer for Idaho Fish and Game. Unlike many leks throughout the West, the ones she’s been monitoring the last six years have been relatively stable.

“There’s always some optimism that we’re going to see more (sage grouse) than we have before,” Harris said. “This year is the first we’ve really seen significantly less.”

Two of the leks Harris surveys had fewer birds this year and one was empty. That doesn’t mean the birds are dead — they could have just moved — but the 2020 count was still a little ominous.

McDonald said he’s optimistic sage grouse will be OK despite sharp population declines. He said he feels hopeful when he looks at how much the state of Idaho has invested in the bird’s success, and the efforts of multiple land and wildlife management agencies.

“Everybody is pulling on the rope in the same direction,” he said. “Everyone has definitely put their best foot forward for sage grouse. … I think it’s going to be a conservation success story.”

Connelly said he’s not very optimistic sage grouse will be able to hang on when, in the face of massive population drop offs, government agencies ignore the best available science and reduce protections.

“The more I see these sort of programmatic approaches by agencies, and watch the state fish and wildlife agencies sort of soft-pedal or ignore the issue, the less optimistic I get,” he said.

“The hope lies with state and federal management agencies coming together and putting together some very strong, science-based plans to protect the habitat we have now and fix the habitat that’s broken,” Connelly said. “We’re not seeing that frankly.”