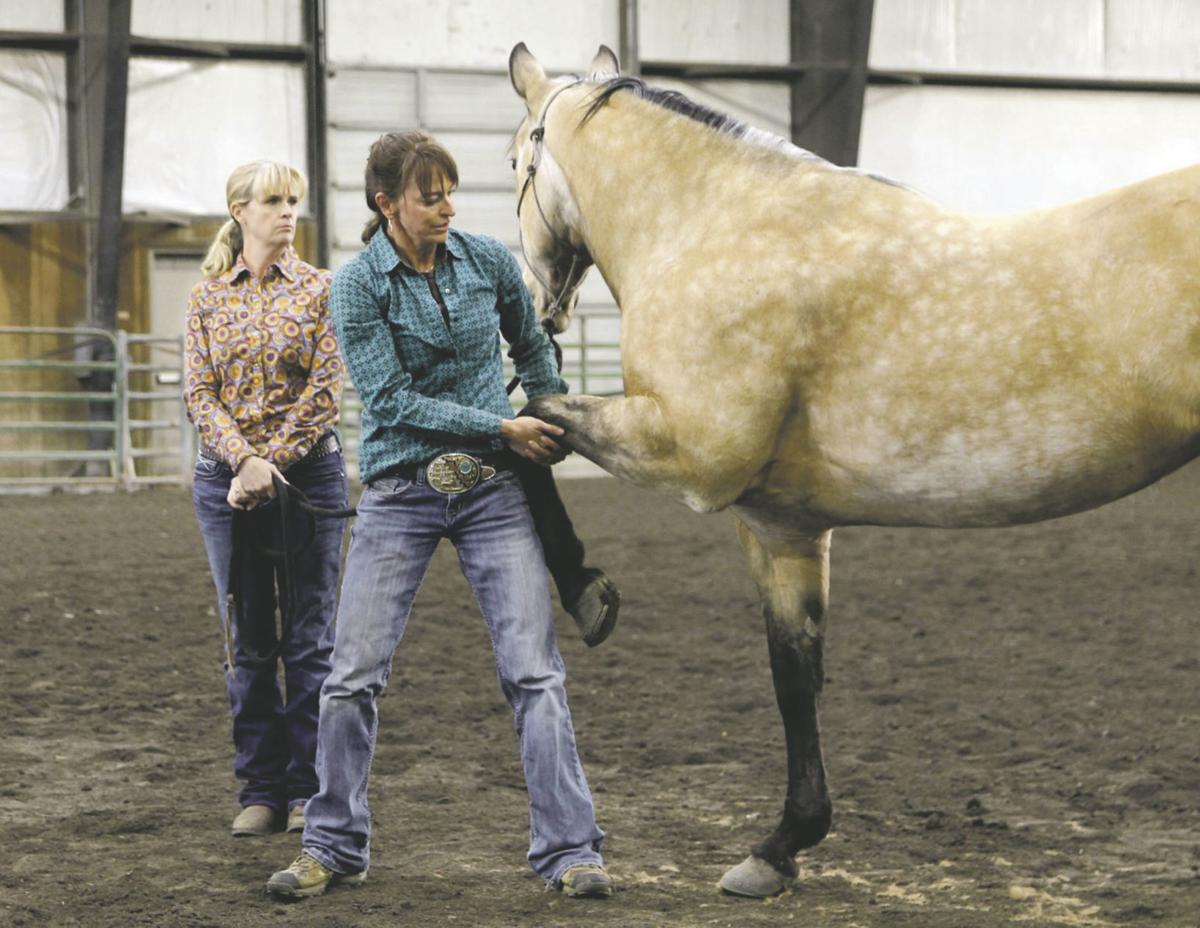 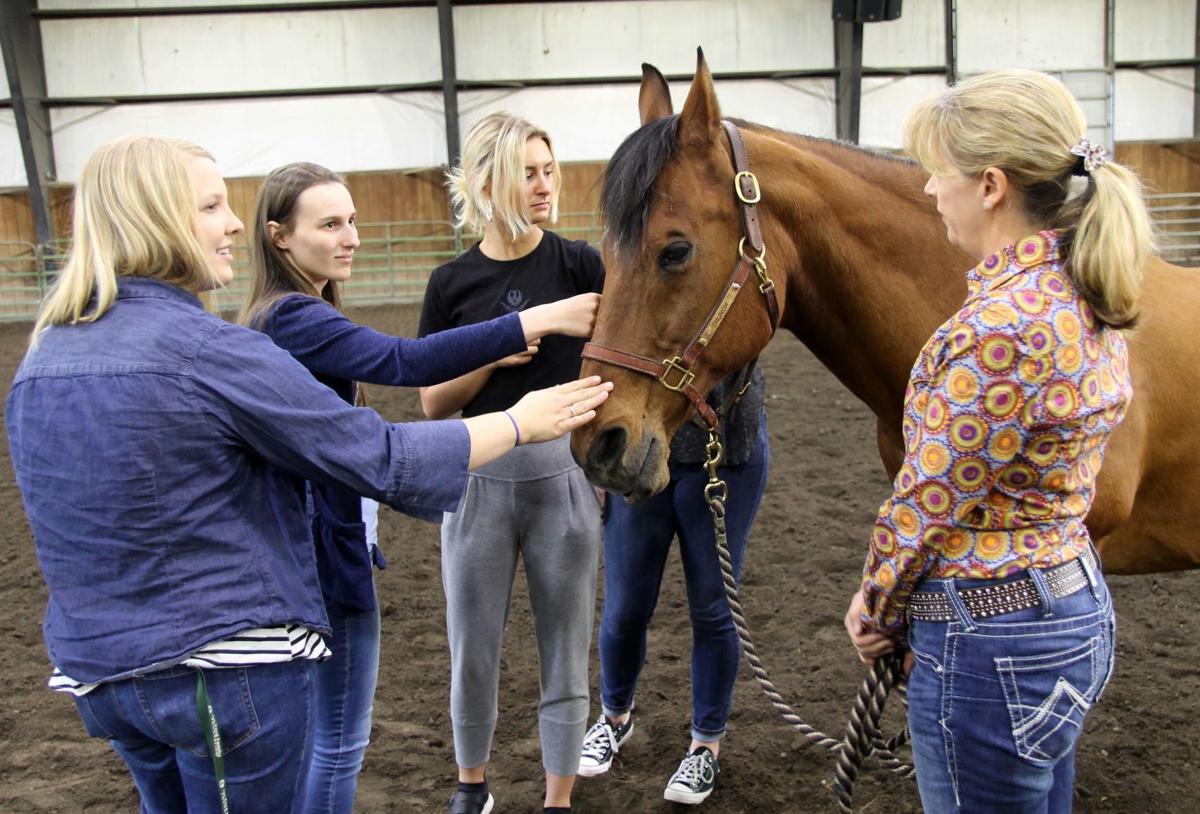 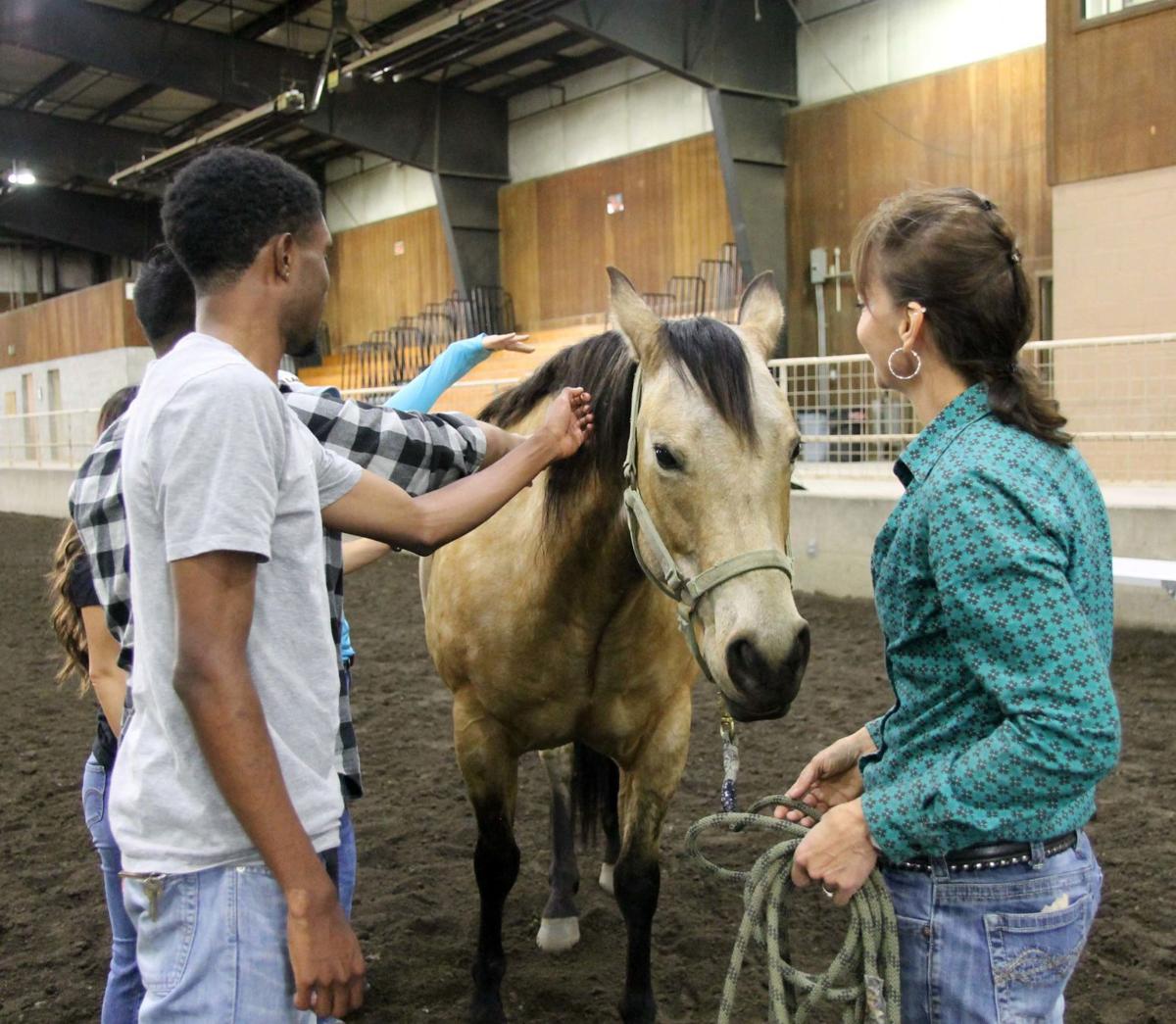 KLAMATH FALLS, Ore. — Leah Ghielmetti stood in the center of a soft, sheltered Klamath County Fairgrounds dirt floor. She gently stroked a light caramel-colored horse named Peach, then shared her horse massage philosophy to a rapt group of college biology students taking notes at folding tables in front of her.

“If you think about all that horses have done for our country,” she said, calling back to days of colonial carriages and battles of war, “and all they have done for us — now, they are basically for our own entertainment. This is giving back.”

She is certified by East Coast-based equine therapy group Therasage. There is no legal licensing stipulation for the work, but Ghielmetti believes it’s important to gain trust of her customers, and support of veterinarians she consults.

“Physical therapy and massage couple each other in the human world and horse world,” Ghielmetti said. “I just believe in it.”

Ghielmetti said horse massage therapy has been common at equestrian competitions for years, but has just been starting to gain traction with everyday horse owners across the country.

“It’s beneficial in the horse word for competitions, so it just went hand in hand,” she said.

After three years of work, Ghielmetti said she has built a solid base clientele of owners from Northern California, to Klamath Falls, Medford and Eugene, Ore. She also works with local horse rescue groups like Project Spirit and the Pegasus Project.

On May 9, Ghielmetti and one of her regular customers, Jeanne Pickens, gave a demonstration with horses Peach and Crunch to Oregon Institute of Technology students taking an elective Biology of Companion Animals class from professor Tricia Elliott.

Pickens told the group how Ghielmetti helped her after Crunch slipped and fell on a patch of ice at night in January. Pickens discovered Crunch in the morning, then rushed him to the vet where he spent five days getting treatment for 13 sores. With Ghielmetti’s help to limber and loosen Crunch’s sore body after the fall, Pickens said his health improved dramatically in a few months.

The two women walked through a variety of standard massage and therapy practices, from tender, targeted muscle rubs, to wrapping saran wrap around a leg (called “sweating”) to promote heat and blood flow in a certain area.

Students, some pursuing careers in veterinary care or animal therapy themselves, peppered Ghielmetti with curious questions and comments throughout.

Kara Chapline of Sprague said she’d been riding her whole life. Horses are her favorite animal, and working with them would be a dream; she just isn’t sure if it’s the right path for her yet.

“It’s actually really interesting to be here and have them go over the therapeutic aspects of it,” Chapline said. “I guess a lot of people don’t really think or realize they need chiropractors and therapy like we do.”

“Physical therapy and massage couple each other in the human world and horse world. I just believe in it.”