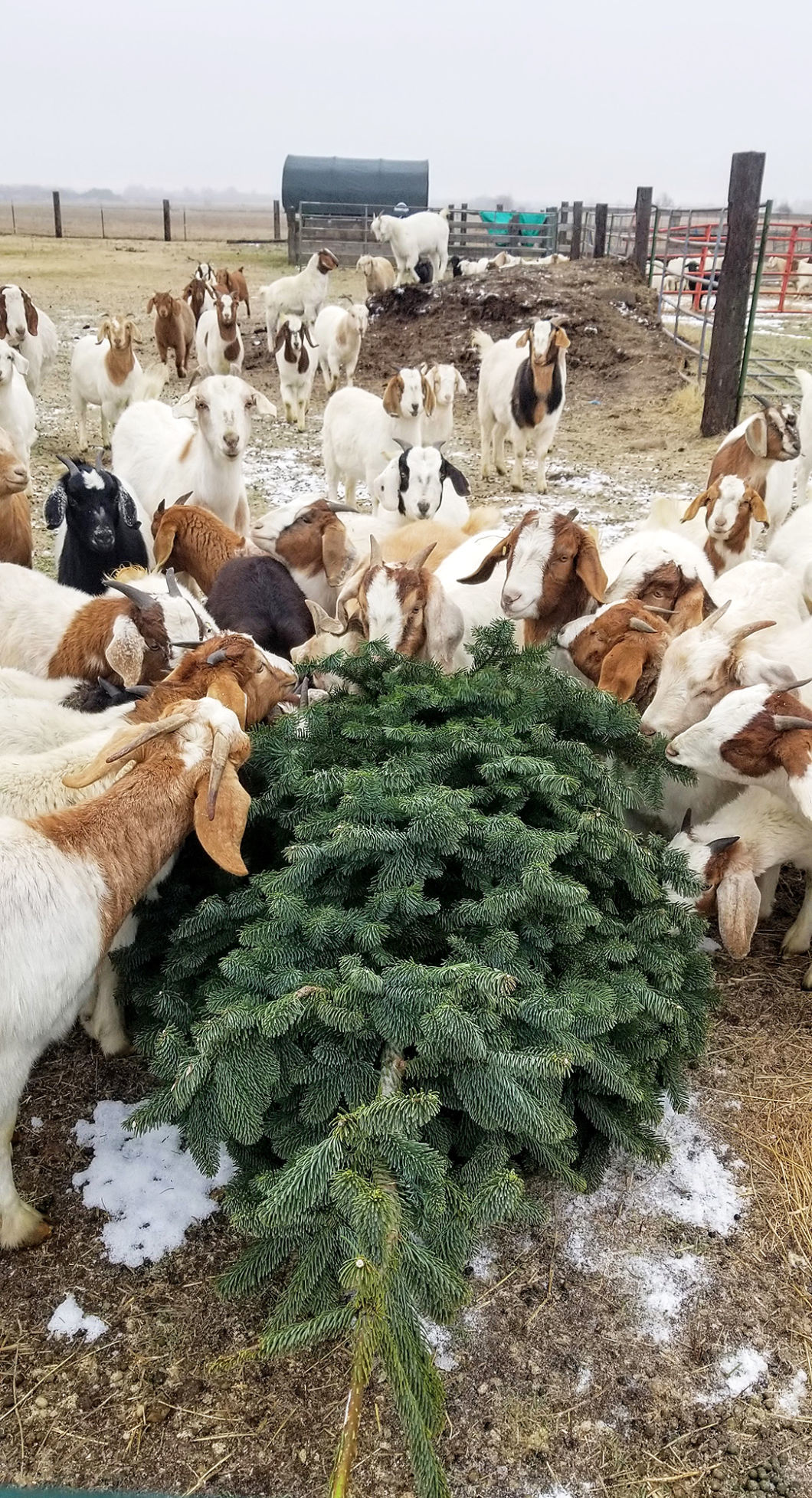 ELLENSBURG, Washington — Getting rid of the Christmas tree can be a hassle sometimes, but with a bit of help, it can become food for some lucky goats in the valley.

“We’ve been in the valley about four years,” she said. “We started out with just a few, and we wanted to find a way to be able to stay in the valley and work with livestock with the farm that we bought. Cattle wasn’t going to be our primary source of being farmers, and so we came up with this and did a lot of research and found that this had really great potential in this area.”

The goats are being bred for meat, noxious weed control and grazing. Heard said the ultimate goal is to get into wildfire prevention with the herd. While living on the West Side, Heard said they owned pygmy goats as pets and learned that the animals enjoyed munching on trees.

“Being surrounded by trees, we knew that giving them the branches helped them with their digestion, gave them vitamins and helped with their resistance to parasites,” she said. “They will actually eat all of the needles, and they will eat the bark.”

Last year, Heard reached out on social media about their animals’ penchant for Christmas foliage. She said she got a handful of responses and traveled around picking up trees for the goats.

“This year, I put it out and got quite the response,” she said.

The response has been purely through social media. Heard said her daughter helped her make posts public so that everyone could see them. Someone got her in touch with Dusty’s Nursery in Ellensburg and they were able to pick up approximately 35 trees from the nursery that were left over after the holidays. Heard estimates she’s picked up approximately 60 trees so far this year.

“People seem to be very excited to donate to the cause,” she said. “I’ve been driving around and doing it, but I think at this point because I’ve backtracked and crisscrossed over, I might need to put a box out front for trees at the end of the driveway and come down and get them.”

Heard said the next step is to acquire a woodchipper to grind down the remaining trunks so that they can use it for bedding for the goats to rest upon. The goats make haste of the trees that are bestowed upon them. She said the trees that were donated from Dusty’s Nursery were consumed within 24 hours.

“They do love them,” she said. “Obviously living here in the valley, trees are definitely something we don’t have close to us.”

Over the next week, as people take their Christmas trees down in the valley, Heard said she expects more people to show interest in getting them to the goats. Having to go back to work after the new year, however, she said she will have to curtail collections and encourage people to donate their trees to another community collection program at the transfer station. In the meantime, she is happy to help collect the trees as long as they are in the Ellensburg and Kittitas vicinity.

“I guess I can’t get everything,” she said. “I stay as close as possible to Ellensburg and Kittitas as possible. Beyond that, I’ve had to decline a few offers as far away as Elk Heights.”

Keeping the goats happy by giving them a late Christmas gift is one seasonal part of the grander plan that Heard said they have for their drove.

“It’s sharing the love for animals for people who maybe don’t grow up with them or around them,” she said.

Anyone interested in donating their Christmas tree must know that they can’t be flocked or tinseled. They can contact heardmontfarm@gmail.com to set up plans to get the goats their new snack.