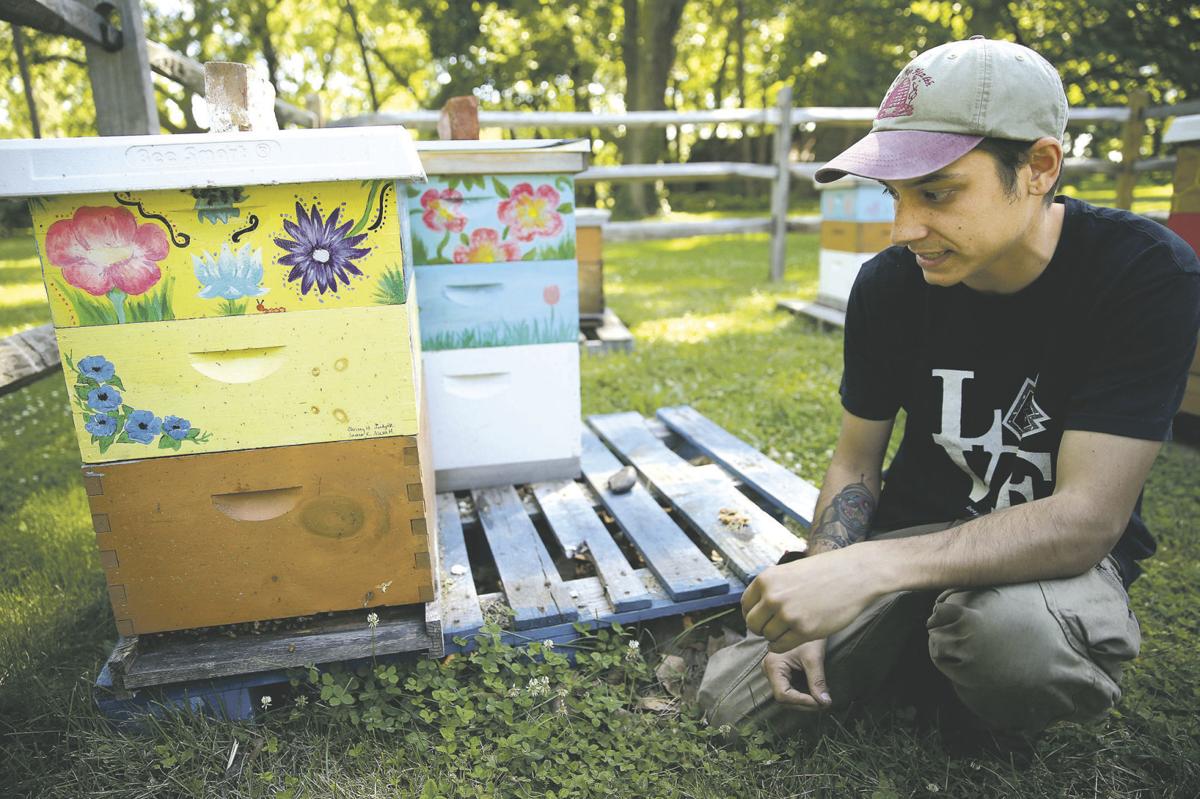 Beekeeper Sam Torres looks over some of the hives in his apiary at Glen Foerd in Philadelphia. Torres, 27, sells his honey and provides beekeeping consulting services under the name Keystone Colonies. He is part of a growing group of millennials in the Philadelphia beekeeping community. 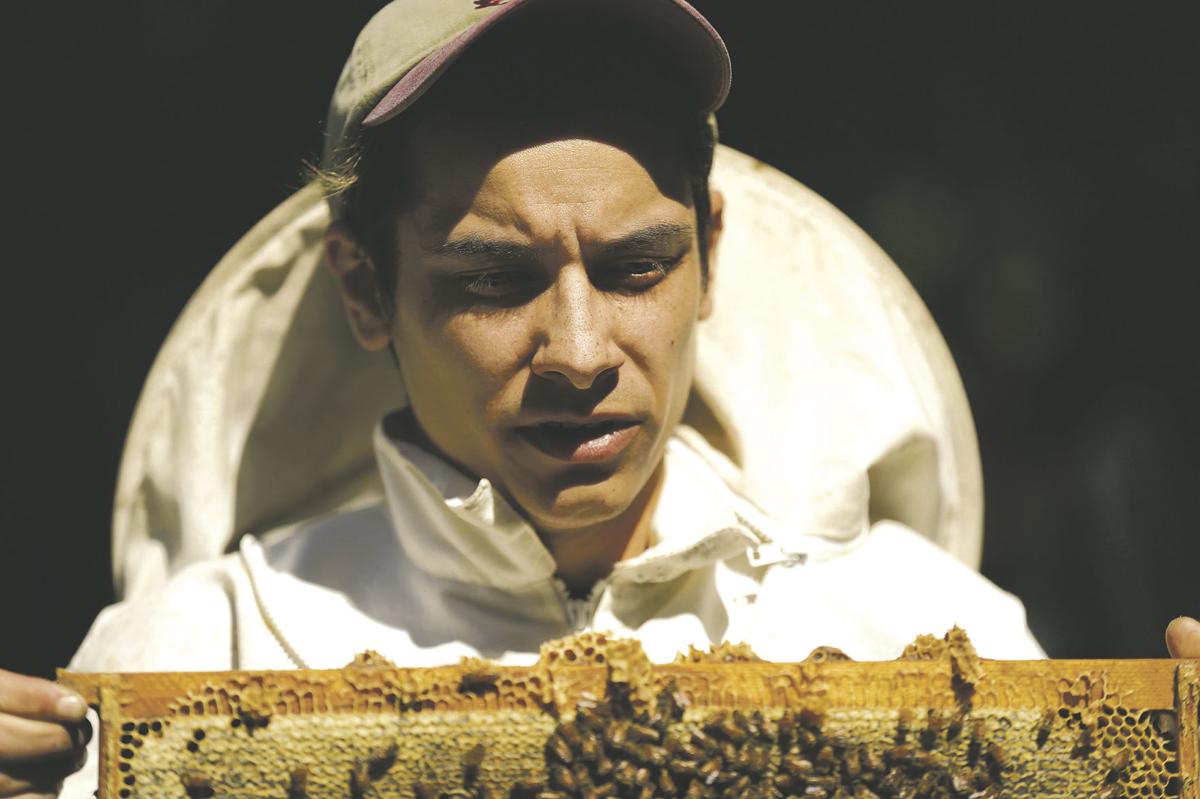 Beekeeper Sam Torres checks on his apiary at Glen Foerd in Philadelphia. 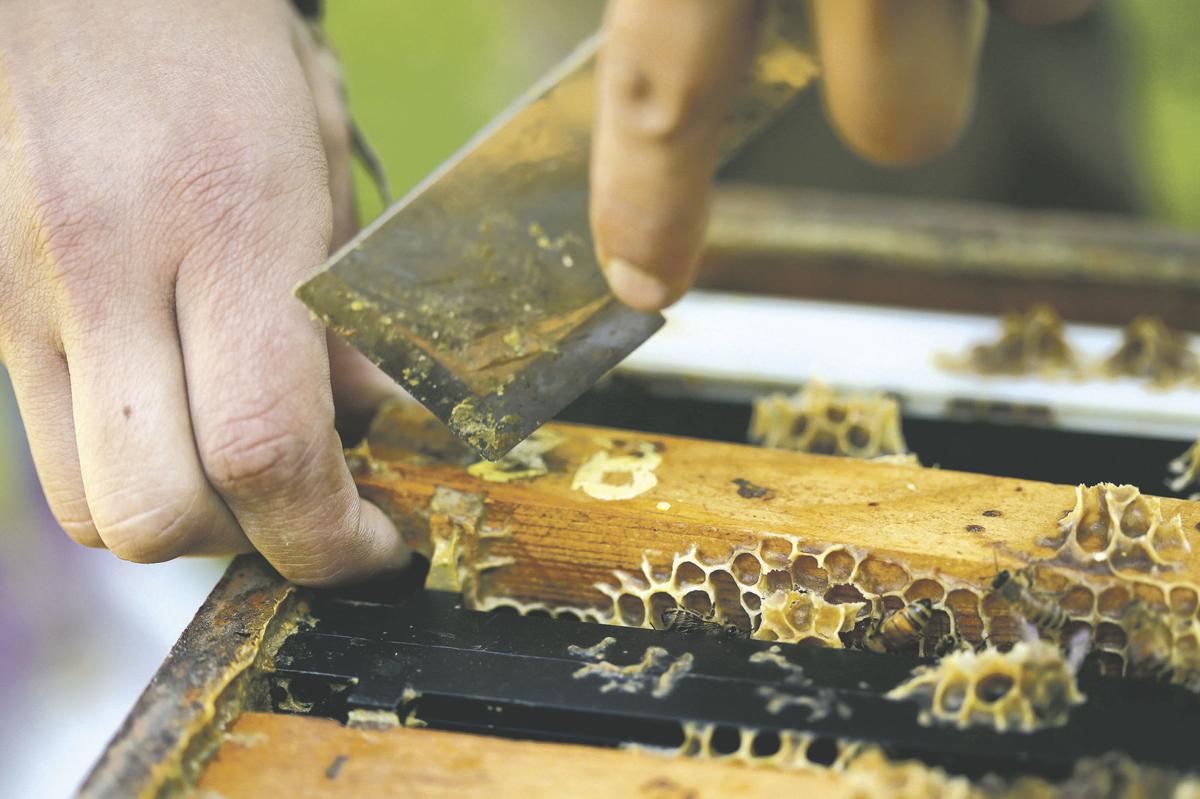 Beekeeper Sam Torres works on one of the hives in his apiary at Glen Foerd in Philadelphia.

Beekeeper Sam Torres looks over some of the hives in his apiary at Glen Foerd in Philadelphia. Torres, 27, sells his honey and provides beekeeping consulting services under the name Keystone Colonies. He is part of a growing group of millennials in the Philadelphia beekeeping community.

Beekeeper Sam Torres checks on his apiary at Glen Foerd in Philadelphia.

Beekeeper Sam Torres works on one of the hives in his apiary at Glen Foerd in Philadelphia.

He gets there about 8 a.m. because bees get up with the sun, and goes through the hives carefully to make sure his "girls" — beehives are a bona fide matriarchy at 85 to 90 percent female — are doing just fine. Smoker in hand, Torres looks at how many cells the bees have capped with wax, meaning that they've filled them with honey, and observes the larvae that will eventually grow into worker bees that clean and forage for the hive.

During one of these checks on a sunny Friday morning, Torres glanced up at the clear blue skies as he popped open one of the six hives he keeps at Glen Foerd. The beekeeper also works as the gardener at the estate, and in exchange he's allowed to keep hives on the property. Each of the hives has 30,000 to 50,000 bees, producing 65 to 70 pounds of honey a year, on average.

"I don't usually wear a beekeeping suit anymore," said Torres, who has been beekeeping for five years after taking a class on it at Temple University. "Only when the bees get anxious because there's a barometric pressure drop, which means that rain is coming. Rain means that they can't work, and they basically exist just to work."

Torres, 27, sells his honey and provides beekeeping consulting services under the name Keystone Colonies. He is part of a growing group in the Philadelphia beekeeping community: millennials. According to Michael Gonzales, a board member of the Philadelphia Beekeepers Guild, the organization has recently experienced an influx of younger, tattooed and smartphone-wielding members. Although there are no regulations prohibiting beekeeping in Philadelphia, apiaries must be registered with the Department of Agriculture.

"I've definitely gotten a lot of inquiries from colleges and high schools about beekeeping," Torres said. "Millennials want to have more of a positive impact on things, and they're also anxious about all the stuff they see in the media about bees dying, which we call colony collapse disorder."

Colony collapse disorder is the phenomenon that occurs when the majority of worker bees in a hive abandon the queen and the immature bees. Researchers have not pinpointed exactly why this happens, but the U.S. Environmental Protection Agency announced in 2016 that a widely used neonicotinoid insecticide poses risks to hives. Researchers have found that neonicotinoids short-circuit bees' memories and navigation abilities.

Torres said that the way farming has changed over the years has affected beehives. Pesticides hurt bees, as well as the lack of diversity in crops. The bees that he keeps at Glen Foerd have access to all kinds of plants, judging from the rainbow of pollen seen on the legs of the foragers.

Eli St. Amour, 23, a member of the Philadelphia Beekeepers Guild, has been beekeeping for 11 years. It was a "dying profession" when he discovered his interest in it during a field trip, but St. Amour said that he's seen a lot more interest from young people recently. Today, he manages hives at 10 different locations, including ones at Haverford College and Bryn Mawr College, and teaches an apprenticeship course for those who want to get started in beekeeping.

"A good way to start is just by shadowing other beekeepers when they go around to their hives," St. Amour said. "People need to learn a lot before they start their own hives, and it's helpful to meet a lot of beekeepers and see how they handle their hives because everyone has their own way of doing it."

St. Amour pointed out that shadowing and helping out a beekeeper with hives was the most realistic option for many young people who want to get started in the craft but do not own their own houses or yards yet.

Torres said that how you start beekeeping is crucial to the success of your hive. He recommended purchasing a nucleus hive, which is a smaller, complete hive with a queen, rather than a package of bees with a separate queen off the internet. Often in those cases, the bees may not accept the queen, killing her, instead. Torres said that anyone who wants to start a hive in the area should wait until next spring.

But for the most part, the bees on were calm. They went about their business, occasionally bumping into an arm or a leg harmlessly. According to Torres, bees sting only as a last resort because they die afterward. Because bees live to work, doing so is pretty wasteful. It's best to remain calm and keep from flailing if a bee comes near you.

If you're looking to start a rooftop hive, you'll need much of the same equipment: frames, brood boxes, a hive tool, and more. However, it may be difficult to find an accessible rooftop where you can start a hive. Hives should also be placed where the bees have access to water and plenty of flora.

"Keeping bees is like keeping livestock," Torres said. "It takes a lot of work and it's a lot more labor now than it used to take. When people come ask me how they can get started, I ask them about their schedules and their end game. It takes a lot of commitment."