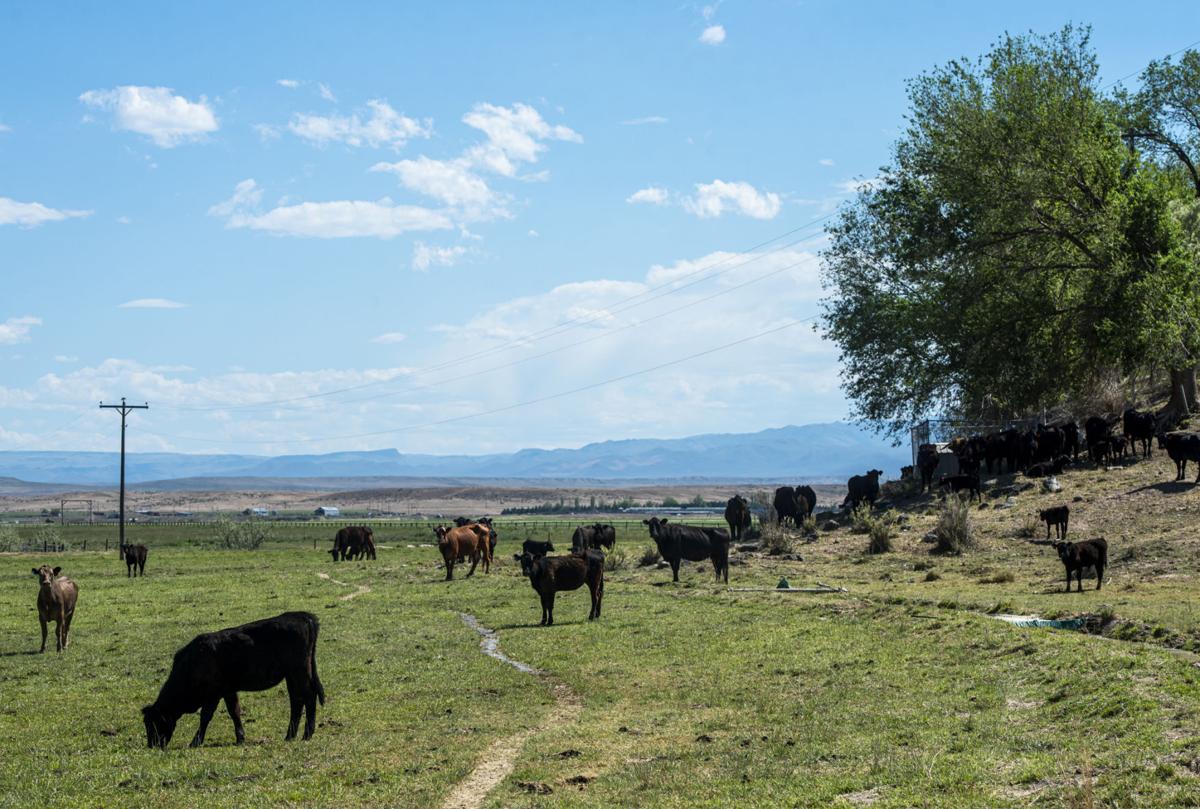 Angus cattle graze in a pasture near Grand View, Idaho, on May 29. 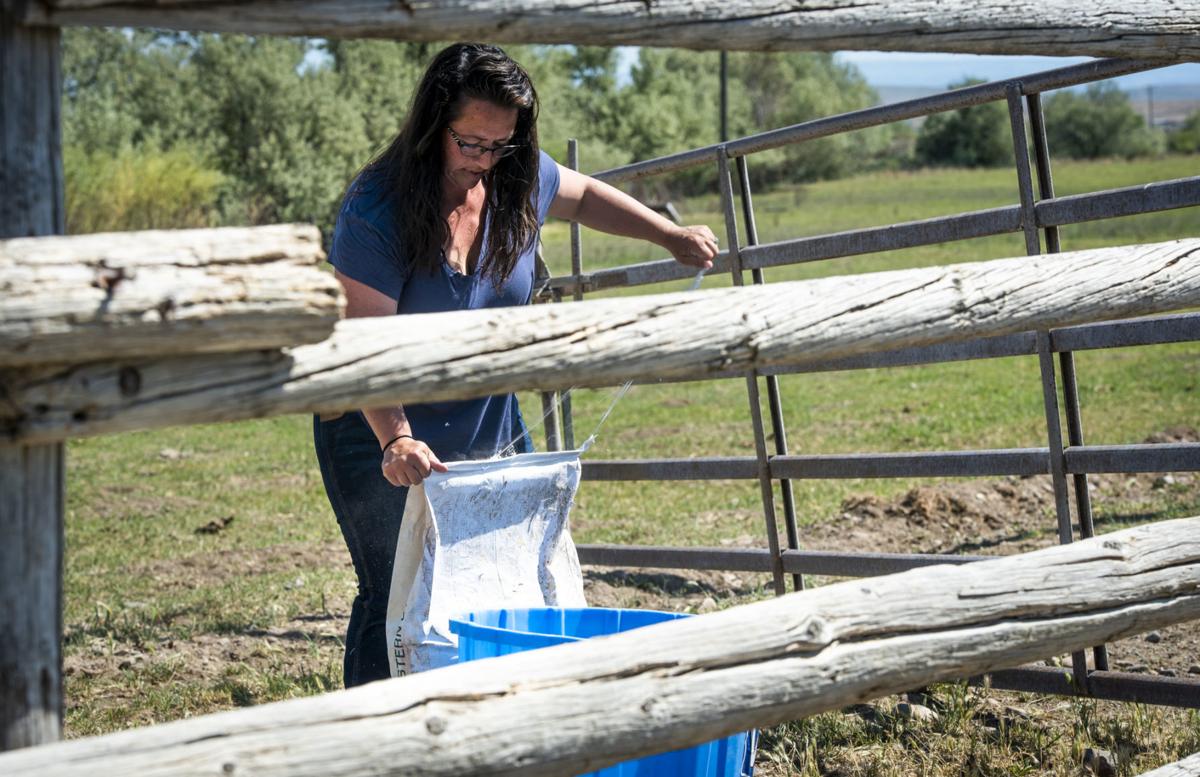 Brecca Hipwell opens a sack of mineral supplements to feed to her cattle on Friday, May 29, 2020, near Grand View, Idaho. 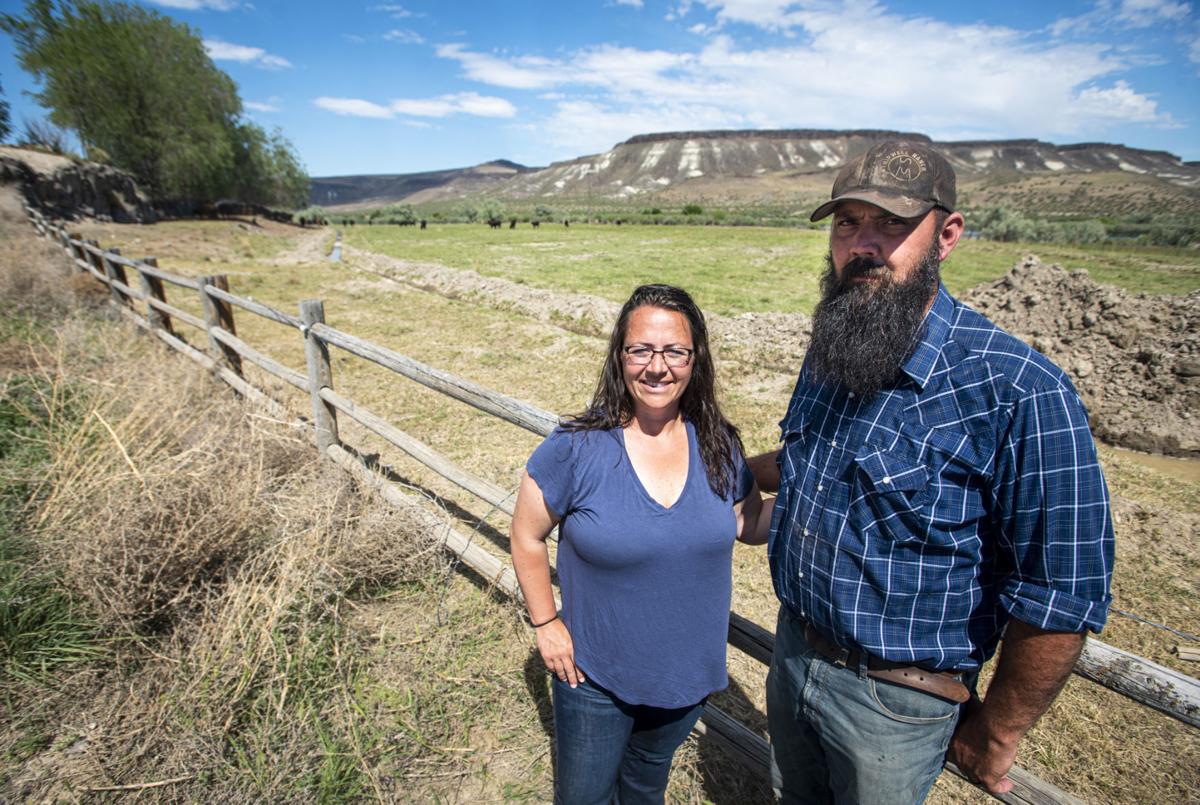 Brecca and Mitch Hipwell pose for a portrait in front of the pasture where their cattle graze near Grand View, Idaho, on Friday, May 29, 2020. 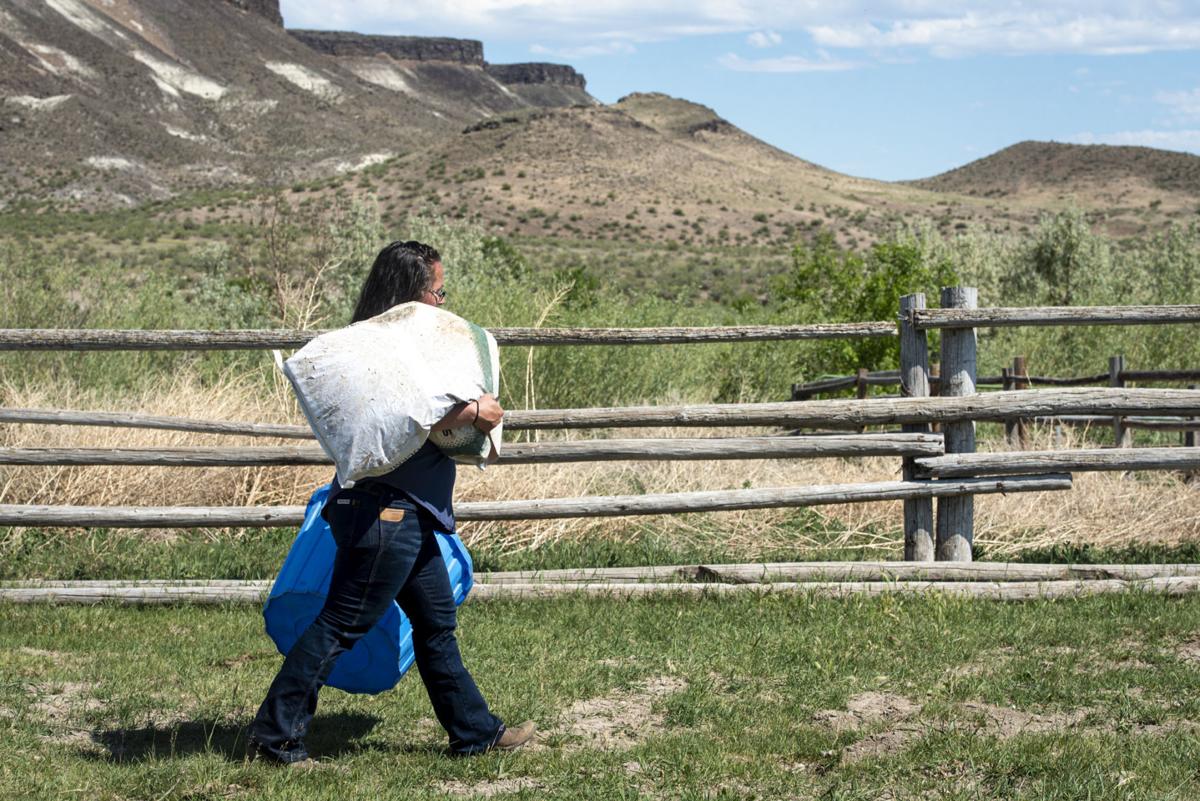 Brecca Hipwell carries a large tub and a sack of mineral supplements to the pasture where her cattle grazes on Friday, May 29, 2020, near Grand View, Idaho.

Angus cattle graze in a pasture near Grand View, Idaho, on May 29.

Brecca Hipwell opens a sack of mineral supplements to feed to her cattle on Friday, May 29, 2020, near Grand View, Idaho.

Brecca and Mitch Hipwell pose for a portrait in front of the pasture where their cattle graze near Grand View, Idaho, on Friday, May 29, 2020.

Brecca Hipwell carries a large tub and a sack of mineral supplements to the pasture where her cattle grazes on Friday, May 29, 2020, near Grand View, Idaho.

NAMPA — As meat packing plants across the country are reducing production and shutting down amid COVID-19 concerns, small Treasure Valley ranchers and meat producers are thriving in many cases, without relying on large processing plants.

While the pandemic has presented obstacles across the board to U.S. farmers and ranchers, local, smaller producers have found themselves with increased sales from previous years.

“On our end we are doing exceptionally well,” said Liz Cunningham, who works on sales and marketing for Cunningham Pastured Meats. “We have had extreme growth on our end, almost more than we could handle.”

Cunningham Pastured Meats is a ranch that delivers custom meat to the Treasure Valley. The ranch sits between Marsing and Oregon’s Jordan Valley.

Cunningham said she believes the home delivery aspect of their meat sales was what originally kept them busy when the coronavirus pandemic left people stocking up on food and staying home.

“That was a huge boost right away as more people were told to stay home, we saw extreme growth in our sales,” Cunningham said. “Then with all of the meatpacking plant closures, people started freaking out about not having enough meat.”

She said at that point sales grew further as people stocked up.

Brecca Hipwell, of Hipwell Ranch near Grand View, said its sales have doubled this year because of the pandemic.

While the increased sales provide a boost in revenue, Hipwell said the increase has also caused the small family ranch some problems. She said as they have had an increase in demand, they have been needing to butcher more animals, but the U.S. Department of Agriculture butcher they typically use in Nampa has been backed up with work until January.

“We are not set up for turning beef into cuts of meat,” Hipwell said. “There is one USDA butcher in the Treasure Valley that does custom beef and that is who we work with, and now we can’t get to them until January.”

That butcher, Northwest Premium Meats, declined Friday and Wednesday to do an interview with the Idaho Press due to the number of customers in the shop.

Hipwell said the butcher’s schedule was the one thing she overlooked during their pandemic response.

“As things were kicking up and we were butchering more beef, I didn’t look at scheduling, and then later when I called to do my rescheduling, there was no room,” Hipwell said.

Hipwell said the farm is able to sell whole, half and quarter cuts of meat to consumers. She said typically people do not have the type of storage for such large cuts, but since people are worried about shortages in the meat industry, they have still been buying the large cuts.

Even without access to its local butcher, Hipwell Ranch is better off than other ranchers who may typically rely on large meat processing plants to purchase their animals.

Liang Lu, Ph.D., assistant professor of applied economics at the University of Idaho, said, “The farms that have contracts with processors or that sell their meat to the processors are all of a sudden seeing a sharp decrease in the demand.”

This is because of the decrease in production and complete shutdowns of many of the large meat processing plants.

“In the local food systems, we see more resilience around those smaller farms,” Lu said. “If you are on the supply chain that goes to the national processing and packaging plants, you are more likely to be negatively impacted.”

Cunningham said luckily Cunningham Pastured Meats had scheduled with Northwest for their meat cuts in advance.

Cunningham said as demand grew for their meats, the ranch started buying cows from other producers who have backups because of the production decrease in large meat processing plants.

“We ended up helping those producers by buying their stock and helped us by picking up our stock,” she said.

Cameron Mulrony, executive vice president of the Idaho Cattle Association, previously told the Idaho Press that some Idaho cattle would typically go to Northwest Tyson beef plants that have now shut down.

“As local and national beef plants have closed and reduced production, a backlog of cattle has stacked up while these plants have not been able to process the cattle. (That backlog) is something we will feel the effect of down the road,” Mulrony said.

Also, many large producers sell their meat to restaurants, and many restaurants still aren’t operating at full capacity.

About 40% of the nation’s meat supply goes to restaurants, according to a Washington Post report.

Cindy Miller, spokeswoman for the Idaho Beef Council, previously told the Idaho Press that closures of steakhouses and other restaurants where the menu revolves around steak and expensive meats have heavily impacted the local meat industry.

“Those types of restaurants are not easily identified as takeout,” Miller said.

It’s not just beef producers that have seen the market change.

Other local food producers have said they have also adjusted well to the demand for local produce. A few small farmers previously told the Idaho Press that they have seen an increase in sales of their community supported-agriculture programs, subscription programs where customers periodically get a box of produce.