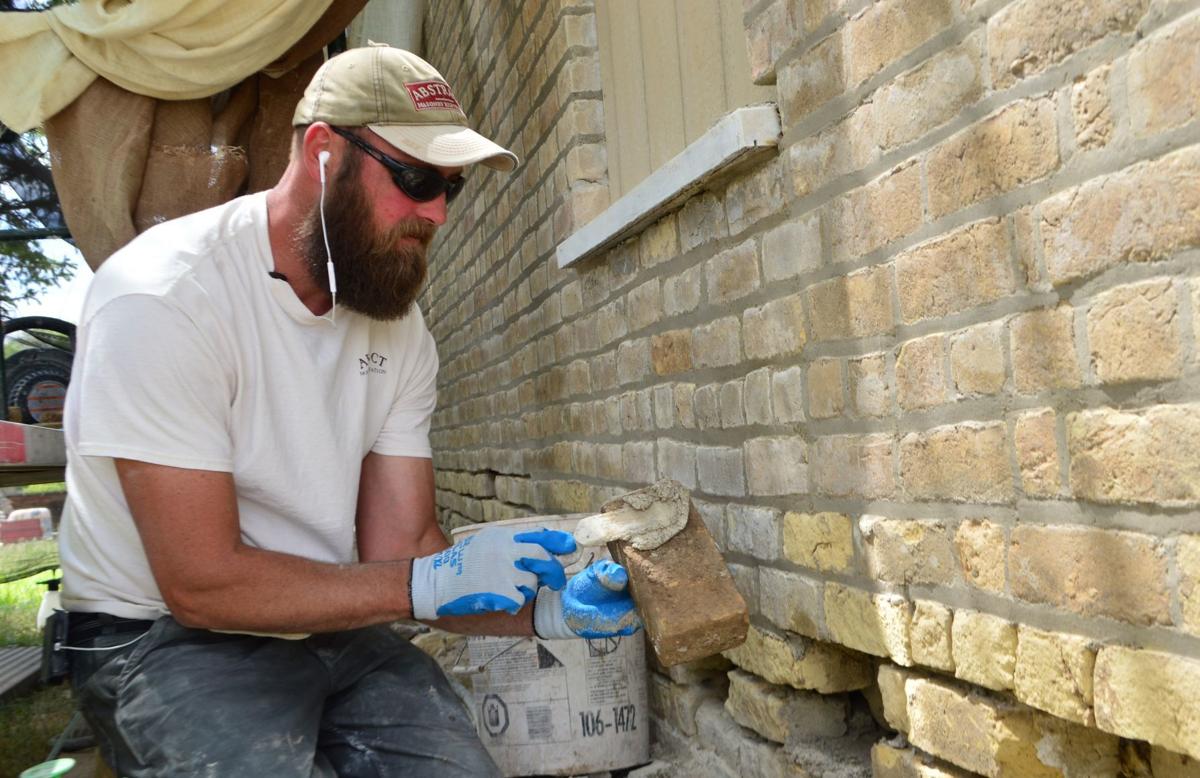 Mason Jared Webb coats a brick with mortar recently at the 130-year-old home of early East Idaho pioneers Nels and Emma Just. The couple arrived in East Idaho 150 years ago and left their mark on the area. 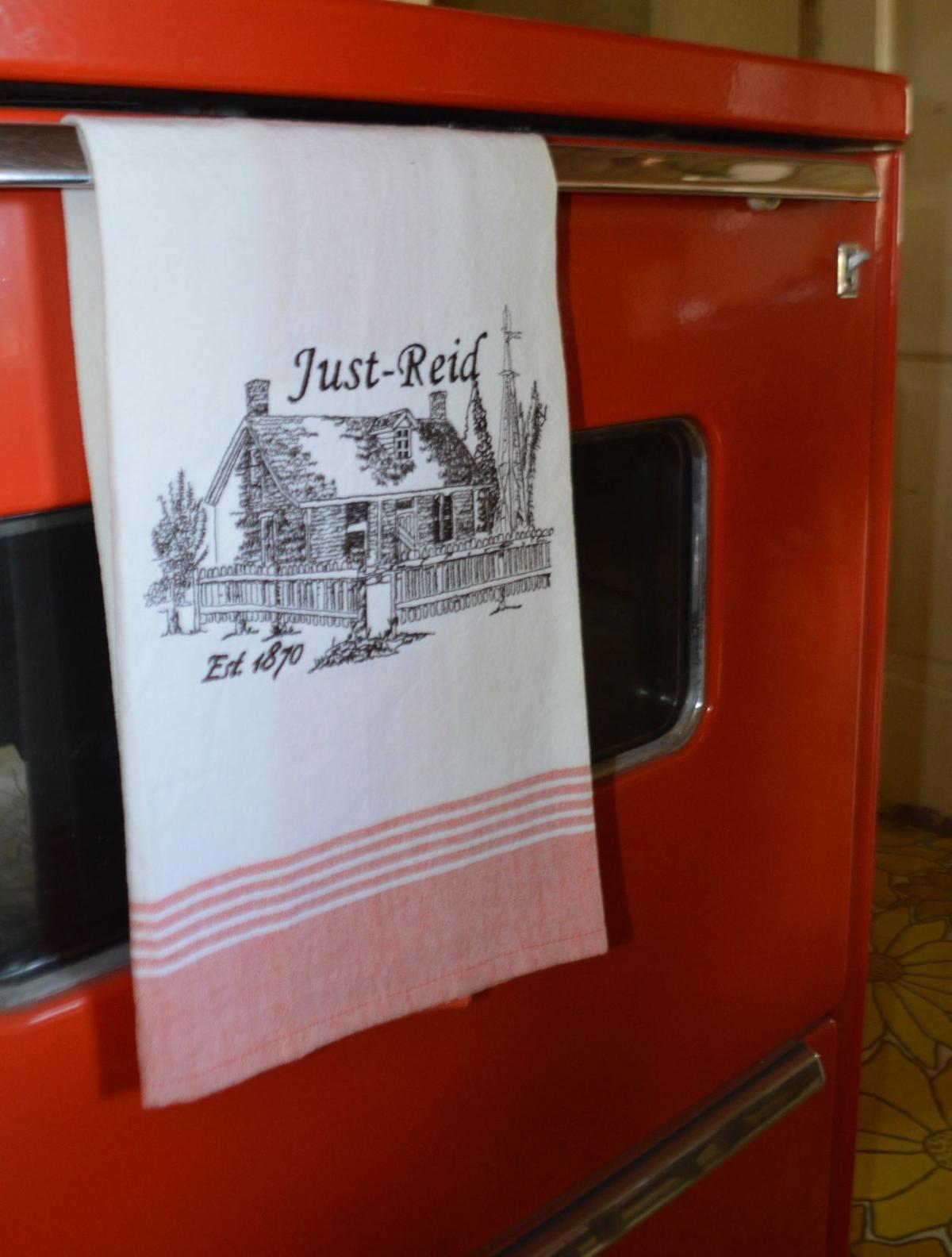 A hand-towel depicting the Nels and Emma Just’s home hangs on a red, electric range in the home. The couple’s daughter Agnes Just Reid and son-in-law Robert Reid installed the range after electricity was made available next to a large wood-burning cook stove when they lived in the home. 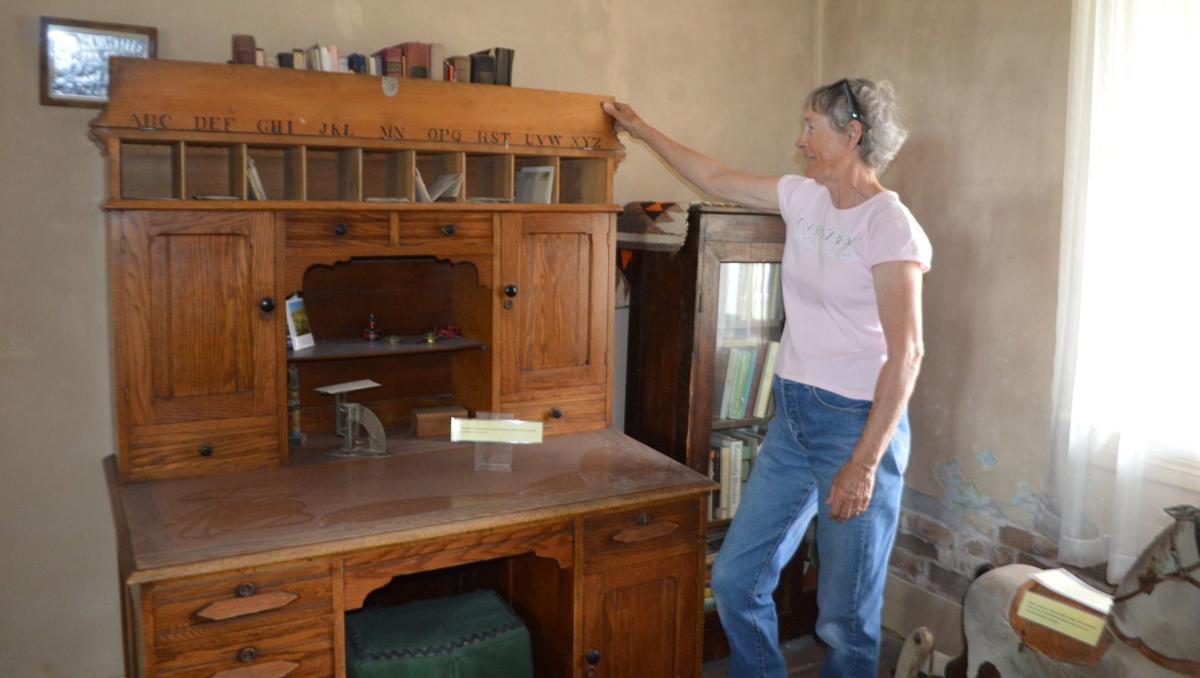 Debbie Reid Oleson stands in front of a desk where early East Idaho pioneer Emma Just ran the Presto, Idaho Territory post office while Idaho was still a territory. A few months later Idaho became the 43rd state admitted to the union on July 3,1890. Emma continued to run the post office from home until 1904.

Mason Jared Webb coats a brick with mortar recently at the 130-year-old home of early East Idaho pioneers Nels and Emma Just. The couple arrived in East Idaho 150 years ago and left their mark on the area.

A hand-towel depicting the Nels and Emma Just’s home hangs on a red, electric range in the home. The couple’s daughter Agnes Just Reid and son-in-law Robert Reid installed the range after electricity was made available next to a large wood-burning cook stove when they lived in the home.

Debbie Reid Oleson stands in front of a desk where early East Idaho pioneer Emma Just ran the Presto, Idaho Territory post office while Idaho was still a territory. A few months later Idaho became the 43rd state admitted to the union on July 3,1890. Emma continued to run the post office from home until 1904.

FIRTH – When you step into the home of Nels and Emma Just, who were two of East Idaho’s first settlers, in many ways it looks like they’ve just stepped out for a bit.

In the entryway of their 130-year-old home, their son’s hand-braided, horse-hair headstall and reins hang beside his handmade chaps. Floors are covered with fine-grained wood grown and milled in Wolverine Canyon just up the road. Their bed is made and the room tidy. In the living room, a creamy-brown leather sofa with a saddle engraved in the leather invites visitors to sit for a spell.

Thanks to a grant from the Idaho Heritage Trust and matching funds from the nonprofit Presto Preservation Association, comprised of descendants and area residents and friends, their family has endeavored to restore the home for the public’s enjoyment.

“It’s been an ongoing project. It’s just been a piece at a time and six years in planning,” said Debbie Reid Oleson, Nels’ and Emma’s great-granddaughter, of Blackfoot.

The family was planning to open the home they refer to as a “living history museum” to the public for several days per year beginning this year, the 150th anniversary of when Nels and Emma first settled in this area. The coronavirus pandemic may delay that.

An ornately carved wood pump organ made in 1896 sits by a window and must have been a welcome diversion before radio and television.

Three generations of youngsters took a fast ride on a wooden horse sitting next to it. The horse was made in Chicago and nick-named ‘Cago,” in a youngster’s attempt to pronounce the city’s name.

Postmarked letters are still neatly filed and a scale remains to weigh them on a desk where Emma ran the Presto Territory Post Office from 1890-1904. It opened a few months before Idaho became the 43rd state to join the union. A huge, black cast-iron wood-burning stove dominates a large kitchen and heated the home since Nels thought a fireplace in the sitting room was a waste of money.

The stove was the focal point where Emma would heat water and flat irons for ironing clothes. It was where she baked bread and cooked hearty meals for her family and an assortment of ranch hands.

“The stove was so big and heavy that it was installed first and the walls built around it,” said great-granddaughter Becky Davis of Presto.

Out a back door and down a stairway is a large room where Emma washed and near where a lava rock cellar was built for storing perishable foods like fruits and vegetables. In a separate cellar, milk, meat, eggs and butter were stored. They were built first and the home after. In total, construction took two years.

Before electricity, the pioneers used natural means to deal with their environment, said Wendy Pratt, great-granddaughter of Firth.

Because cellar walls were thick and were built into the earth, a cellar was perfect for storing perishable foods because they were less likely to freeze in the winter and stayed cool in the summer. They were built of lava rock collected from outcroppings nearby. Saw marks on a butcher block where meat was cut still remain, Pratt said.

The couple had 10 children including Emma’s son from a previous marriage. Four children died in infancy and are buried in a family cemetery nearby, along with Nels and Emma and other relatives.

Their youngest daughter Agnes Just continued living in the home after she married Robert Reid. The couple raised their five sons — Eldro, Vincent, Fred, Douglass and Wallace — in the home.

Descendants ranch and farm in the area to this day. Douglass Reid continued to live in the home after his mother’s death, leaving the interior of the home mostly like it was when Nels and Emma and his parents lived there.

Agnes Reid’s typewriter still sits at a desk where she wrote the book, “Letters of Long Ago,” recounting Nels’ and Emma’s life taken from Emma’s letters to her father, George Thompson, who had returned to England. Agnes also wrote a popular weekly column for 40 Years for the Blackfoot Morning News titled “Just a Thought.”

Many of the goals of the restoration in an extensive plan developed by the Presto Preservation Association have been fulfilled with the additions of windows, interior walls, some roof replacement and repairs. Walkways remain to be completed.

Within a few weeks, the latest renovation project of replacing damaged or broken brick and loose or missing mortar to the exterior brick walls should be completed.

Jared Webb, of Salt Lake City, has been replacing worn or broken bricks on the exterior walls for several weeks and hopes to finish all four walls this month. Webb, a mason with 12-years’ experience works for Casey Sullivan who owns Abstract Masonry Restoration. Sullivan, also of Salt Lake City, diligently ensures that restorations are historically sound through research and history.

“I love this house and the drive up here,” Webb said.

Webb has helped restore some Charcoal Kilns in Piedmont, Wyoming, a brewery in Washington State and a Whaler’s home in Nantucket, Massachusetts. Webb worked as a mason in new construction before switching to restoration.

“I got into restoration to keep old buildings around longer,” he said. “I was in commercial and residential masonry before and this is real different.”

Webb is using about 1,800 bricks recovered by three dozen Just-Reids representing several generations. The bricks came from the home of the Just’s friends Fred and Finetta Stevens after it had fallen into disrepair and was bulldozed to make way for a pivot irrigation system. Both homes were built at about the same time near the Blackfoot River — the Just home is in the Presto area east of Firth and the Steven’s home is southwest of Blackfoot. The cache of handmade, hand-fired bricks were made from Blackfoot River silt. Mortar is also made from sand taken from the banks of the Blackfoot River.

“The brick is super soft probably because it wasn’t fired very hot. But it’s harder than adobe,” he said. “A lot goes into color matching the mortar so that it matches well.”

Once the correct color is reached, mixing the mortar is time consuming to get the material to the exact consistency.

“It requires more mixing time, about half an hour. With new construction you just add water to a dried bag of mortar and you’re good to go,” Webb said.