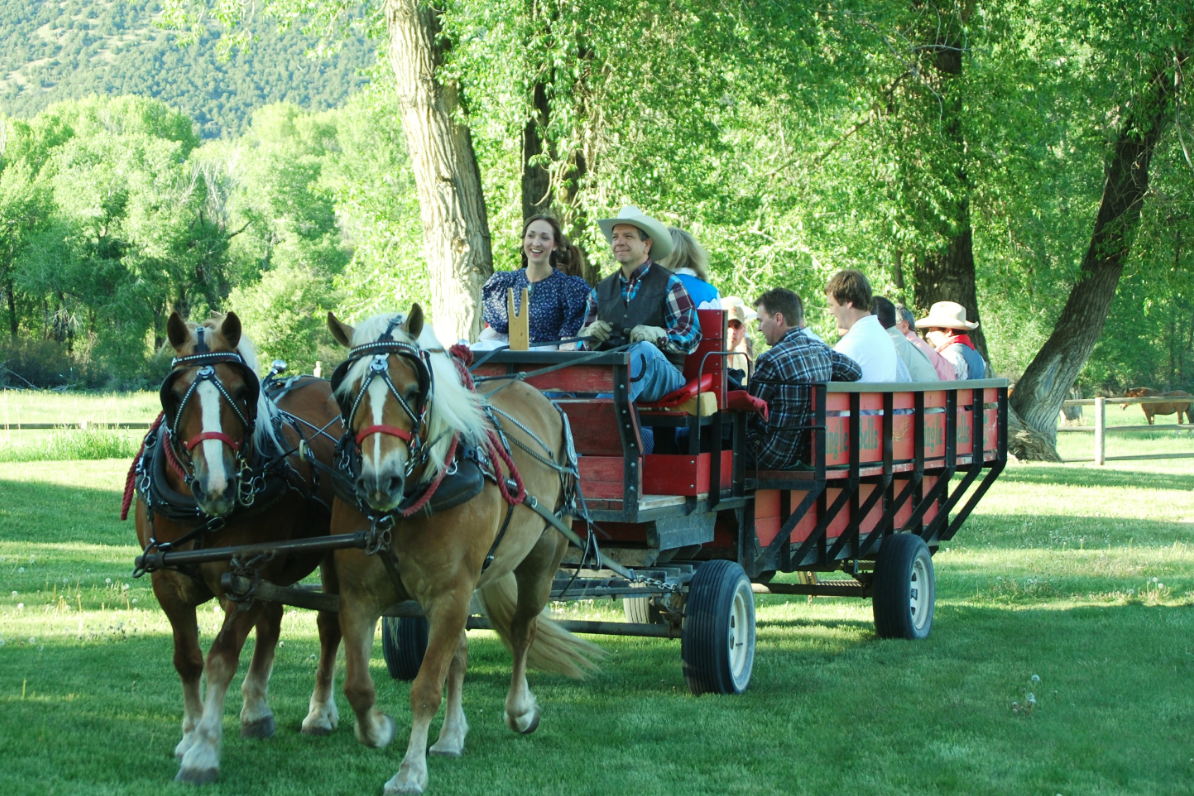 The Mountain River Ranch is up for sale after 35 years. 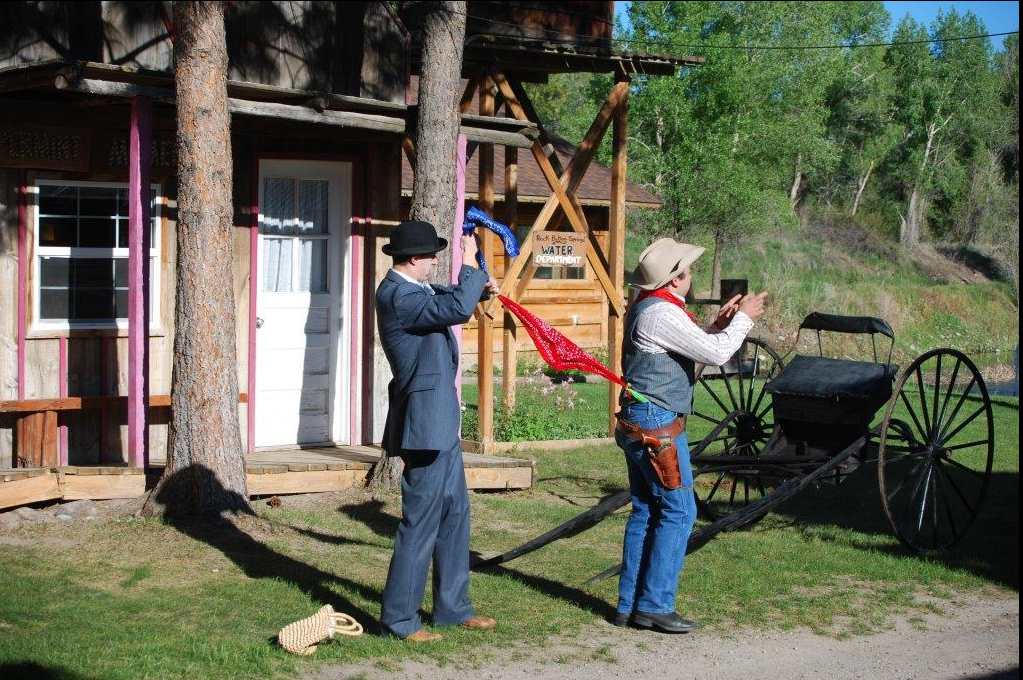 The Mountain River Ranch has a long-running Wild West show. 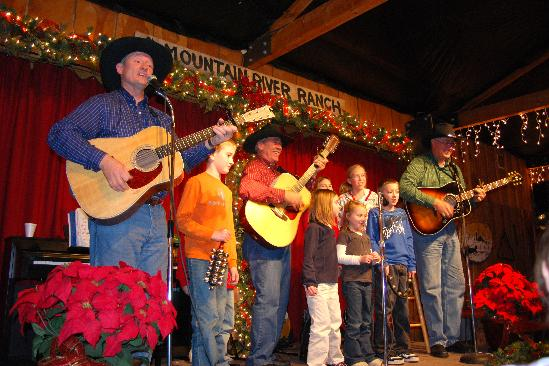 The ranch’s Christmas show was its popular show.

The Mountain River Ranch is up for sale after 35 years.

The Mountain River Ranch has a long-running Wild West show.

The ranch’s Christmas show was its popular show.

After nearly four decades of offering visitors a taste of an Old West experience, Mountain River Ranch north of Heise is for sale.

In a 2014 Intermountain Farm & Ranch article by Kathy Corgatelli NeVille, the place was described as “a reminder of the way things used to be.”

“Guests are treated to a cup of steaming apple cider when they arrive at Rock Bottom Springs, a town reminiscent of the Old West. This time of year, it’s trimmed with hundreds of Christmas lights,” Corgatelli NeVille wrote. “Christmas music plays over the outdoor speakers while visitors gather around a roaring campfire.

“Cowboys dressed in long dusters, boots and hats wave with a gloved hand from the seat of horse-drawn sleighs when they enter town to pick up dinner guests. Steam rises from the noses and backs of the teams that are eager to get going.

“The sleigh bells hanging on their harnesses take on a clear sound in the frigid night air. White snow crunches under their feet as guests are taken past dozens of lighted displays to the Meadow Muffin Theatre. The smell of wood smoke rising from the theater mixes with the rich smell of a homemade meal being prepared on the other side of its wooden walls.

“The folks at Mountain River Ranch ensure that guests and employees alike are treated like family. It’s been that way for years.”

Those years, all 35 of them, are about to come to an end.

King’s daughter, Julie Anglesey, has run the place in recent years. But now that she’s looking to transition into real estate full time, King has decided to let the place go.

“I’m very proud of what we’ve done with it, but change has come about. … I’ve gotten to the age where I’m not going to go on stage anymore and try to run the whole thing. … And my kids don’t want to do it, so the options are pretty obvious,” King said.

The place has long been a staple in the community. More than 12,000 people a year make their way to the ranch every year, King estimates.

The 47-acre Mountain River Ranch has two parts. The first is a 60-spot RV park that operates from June to September. Those “looking for more of an old west experience” can stay in one of its “cabins, rustic rooms or even a tepee or wagon.” About 135 people stay there each night.

The second part is what makes Mountain River Ranch so unique. It involves a horse-drawn wagon ride (or sleigh ride in the winter) and a family-friendly variety show over dinner.

It wasn’t always that way. The place had humble beginnings. King bought the Ririe property in 1974 from a farmer. However, he let the land sit for years. After spending time in Connecticut, he moved his family back to the area in 1983 and built a home there. He also built a general store, hoping it would bring in a good income.

“I built a general store out on the corner and that worked fine in the summer. But along came winter and, boy, I thought I was going to starve to death. So I literally bought a team of horses and a sleigh and I moved some grocery shelves back and thought, ‘I’ll advertise that we’ll take people on a sleigh ride and have a spaghetti dinner.’ That was the start of it,” King said.

The business slowly grew into the experience is it today. King, who participated in the variety show for years, said he’ll miss his days on stage and the “natural pump-up” he got from interacting with the audience. The Christmas show was always King’s favorite. It seemed to be a favorite of locals and tourists as well, since they sold out nearly every night in December.

A 1999 Post Register article by former reporter Maggie Hall Walsh captured the feeling of the dinner theater during the holidays.

“The Meadow Muffin Dinner Theatre is decked out for the holidays and the smell of dinner and the sound of live Western music greets guests. Miss Jenny and the Mountain River Mounties, a three-piece group made up of Jenny Korenke on fiddle, E. Bruce Stanger on guitar and Ron Dilg on a variety of instruments, play music ranging from Hank Williams tunes to Irish jigs to Christmas classics throughout the meal and afterward. A recitation of a Baxter Black holiday poem by Mike Connaughton is particularly humorous and you may get a surprise visit from Santa Elvis in a bad wig. There are a few rules at the Meadow Muffin that guests should be aware of. If you don’t hang your coat on a hook “it’s liable to get trampled” and you’ve got to sing for your supper. The eating order is determined by how loudly each group of people sings ‘She’ll be Coming ‘Round the Mountain River Ranch When She Comes.’ Enthusiasm and bribes for the judge are extremely effective.”

For the first time since the Mountain River Ranch started offering them, there were no horse rides or dinner shows this summer. The coronavirus pandemic made it too difficult. But King hopes this won’t be the end of those shows. He’s got his fingers crossed that whoever buys the place will keep it the way it’s always been.

There has been “a heck of a lot of interest” from people considering buying it, King said. They’ve already done a number of showings. King is hoping to sell the RV Park and dinner theater as a unit, but is willing to consider selling them separately. Listed online for $2,600,000, the property sale is being facilitated by Kerry Howell of CENTURY 21 High Desert.

“It’s so unusual. It just isn’t like any other establishment,” King said. “And honest to God, there are so many memories. So many.”