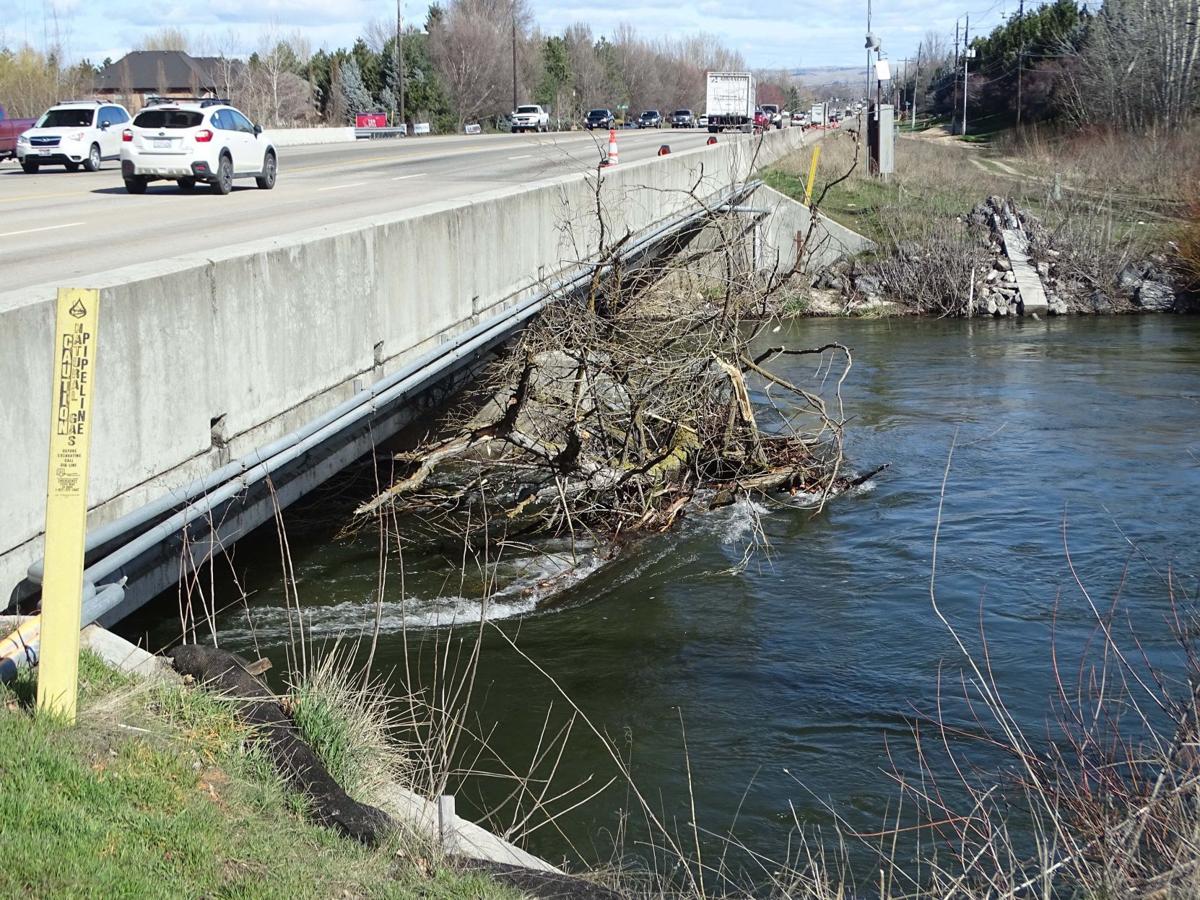 Debris is caught in a bridge pier on the Boise River at flood stage in 2017. 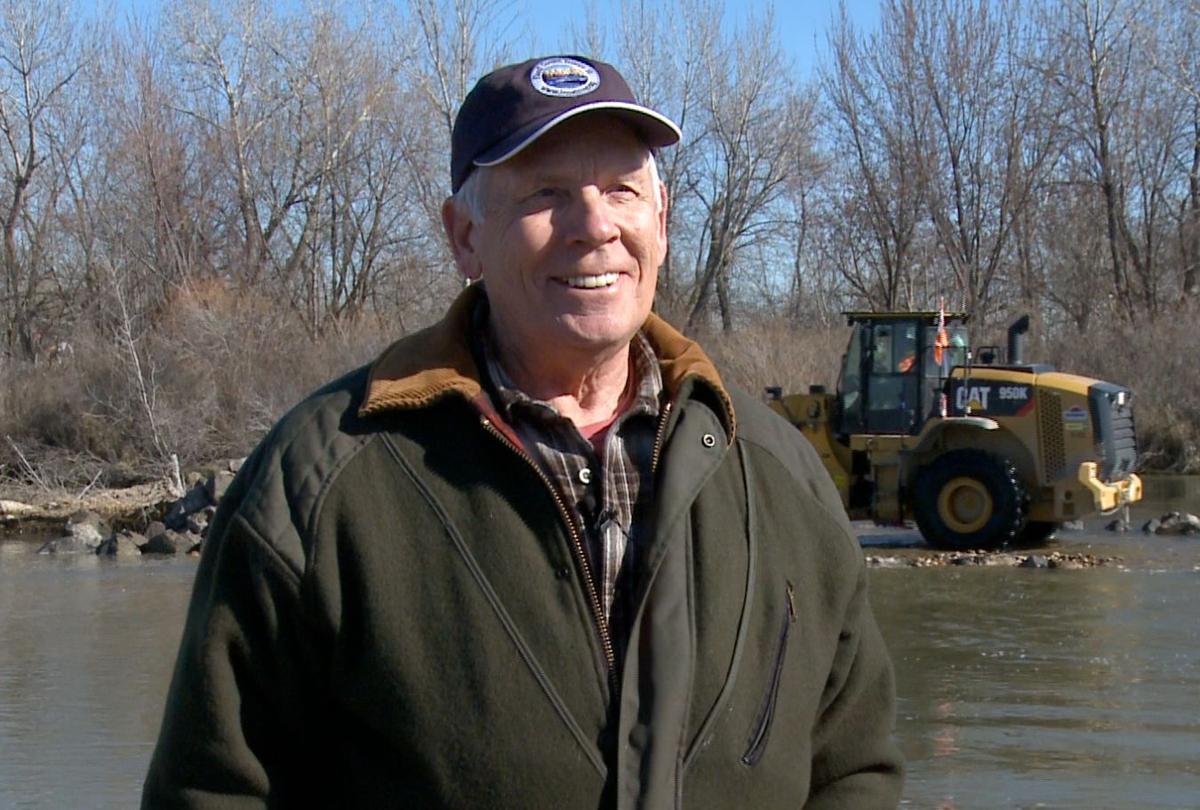 Mike Dimmick, district manager of Flood District 10, stands along the Boise River in 2019.

Debris is caught in a bridge pier on the Boise River at flood stage in 2017.

Mike Dimmick, district manager of Flood District 10, stands along the Boise River in 2019.

The big flood event of 2017, when the Boise River reservoirs filled quickly with mountain snowmelt in that epic winter termed “Snowmageddon,” forced federal water authorities to release more than 7,000 cubic feet per second of water flow down the Boise River for 101 days from April to late June, as measured at Glenwood Bridge in Boise.

More than 12,000 cfs was being released from Lucky Peak Dam by the Army Corps of Engineers and the Bureau of Reclamation, and 2,000+ cfs was diverted into the New York Canal and Lake Lowell. High flows caused the Boise River to flood multiple locations along the river corridor, with flows spiking to 9,500 cfs several times in May. Flood stage is 6,500 cfs or higher.

If the weather had heated up to the 80s or 90s during that spring, the flows could have reached 10,000 cfs or higher at Glenwood Bridge, officials said, causing widespread flooding. Fortunately, temperatures remained cool and the melt-off-occurred slowly.

However, it was a grim and necessary reminder that the Boise River can cause flood damage on a periodic basis, officials said. And it clarified the importance of river-maintenance activities carried out by Flood District 10.

“People were laser-focused on every possible tree or snag in the river that could get hung up on a bridge or other obstacles and become a safety hazard. It was a very tense, nip-and-tuck situation every day,” said Mike Dimmick, District Manager for Flood 10.

Former Gov. Butch Otter urged local authorities to work together to prevent major damage. “We take this responsibility very seriously,” Otter told the Idaho Statesman. “City, county, state and federal disaster response personnel are working together to reduce the threat while keeping the public informed and prepared for the potential of more serious flooding.”

That year, more than $2 million in damage occurred to the Boise River Greenbelt, untold amounts to flooded-out mobile homes and residences, and in a very wise move, the Plantation Island Greenbelt bridge was hoisted off its footings for safety reasons. Rapidly eroding gravel around the bridge abutments created enough concern to evacuate the bridge.

The 2017 flood caused a great deal of riverbank erosion, creating a “pit-capture” from the river into a residential pond in Eagle, and it re-arranged river cobble and gravel up and down the river corridor. The Army Corps of Engineers installed miles of barrier walls along the Boise River by a number of gravel pits to prevent floodwaters from reaching the Boise Wastewater Treatment Plant. Flood 10 officials worked closely with the Ada County, the Corps of Engineers, and the Idaho Office of Emergency Management to help organize sandbagging, emergency repairs and bridge clearing.

“Communities along the Boise River were salvaged by a heroic community effort,” notes Andy Tranmer, a professor in the College of Engineering at the University of Idaho who has been studying sediment flows on the Boise River for Flood 10. “The deft operations of the Corps of Engineers and local community, as well as fortuitous weather conditions allowed us to avoid a disaster with potentially major residential and commercial flooding.”

In 2017, the Federal Emergency Management Agency (FEMA) was very slow in responding to flood damage claims in Idaho, taking more than a year to respond. “FEMA was overwhelmed with claims from Hurricane damage in Texas, Louisiana and the Virgin Islands,” Dimmick noted. “It would take them two years to process some claims.”

Steenson and the Idaho Water Users Association advocated for a state flood-management grant program, with $1 million in funding. The Idaho Legislature approved the program in full. The Idaho Water Resource Board was charged with managing the program. A maximum of $200,000 would be allowed for individual grant projects, with a 50 percent match required.

“That was a game-changer for flood-mitigation work in the state of Idaho,” Dimmick says. “With state flood-management funds, we can act much quicker to address the damages caused by floods.”

In the first year of the program, Flood 10 applied for a state management grant to address four major riverbank repairs needed along the Boise River, including the pit-capture problem in Eagle. In the largest project, Flood 10 worked together with the Natural Resources Conservation Service (NRCS) to restore more than 200 yards of river bank with heavy rock and rock barbs. The design integrated root wads and willows into the rock work for additional stability and improved trout habitat.

“This project involved rebuilding a bank that was completed destroyed (by the 2017 flood),” said Doug Higbee, an engineer for NRCS. “We’re putting it in so not only is it stable, and can survive another flood event with water overtopping the bank. We’ve got willow plantings, cottonwood pole plantings, root wads put into the channel, and grass seeding on top of the bank. In many years to come, you’ll be able to come back here, and it will look like a natural part of the river system.”

The 2D model tool would include collecting high-resolution Lidar imagery along the river corridor to identify trouble spots of major gravel bars, trees and debris that need to be addressed. The imagery also provided detailed images of the river below the water’s surface to reveal water depth, fish habitat and other river features that could be helpful for management decisions.

The Idaho Water Resource Board funded the application, sensing that the 2D model tool could potentially benefit other river basins in Idaho.

Flood 10 officials has been working with Tranmer for several years on a sediment study, tracking the movement of river cobble and sediment in the Boise River corridor over time, from Lucky Peak Dam to points west of Caldwell. Tranmer leads the Center for Ecohydraulics Research at the UI College of Engineering.

That study, combined with the 2D Model Tool, informed the need to address specific problem areas along the river corridor where excessive sediment buildup or gravel bars were becoming looming threats that would cause damage to private and public property, officials said.

“Without knowing what is happening across the entire river system, it is very challenging to predict how floods will impact the community,” Tranmer says. “But now we have the new modeling system to help.”

Flood 10 is contracting with the Army Corps of Engineers to develop the 2D Model Tool, now being finalized in the spring of 2021. It’s a big project, exceeding $900,000, starting with a $160,000 flood-management grant from the Idaho Water Resource Board and $100,000 from Flood 10. Other project partners include NRCS, the cities of Boise, Garden City, Eagle, Caldwell, Middleton, ACHD, Eagle Sewer District, Treasure Valley Water Users and the Pioneer Irrigation District.

By bringing together all of those partners, Dimmick hopes the 2D model tool will help coordinate more proactive management of the Boise River.

Another initiative that has occurred recently is identifying trout-nesting sites in the gravel of the Boise River through coordination with Idaho Fish and Game and the Boise Valley Fly Fishers to ensure that heavy equipment does not harm those sites, known as redds. Detailed information plotted on Boise River maps helps Flood 10’s contractors know what areas to avoid.

Flood 10 and BVFF worked together recently on a spawning habitat-improvement project in a side channel of the river. They added some fine gravel, donated by Sunroc, to the side channel that’s more optimum for fish spawning.

“We’re also going to relocate some woody debris in the sides of the channel so when the trout fry come out of the gravel, they’ve got a place to hide from predators and grow,” says Troy Pearse, a member of Boise Valley Fly Fishers. “There aren’t that many side channels in the Boise River corridor where fish can spawn. So this is a great opportunity to grow more brown and rainbow trout. We appreciate Flood 10’s help with this project.”

All of these types of efforts will allow Flood 10 Chairman Bill Clayton to realize his dream of getting ahead of the curve, managing the Boise River in proactive fashion. He’s been at the helm of the Flood 10 board since 1989.

“It’s really important to bring all of those stakeholders together so that we can all get more on the same page about how we’re going to manage the Boise River into the future,” Clayton says.

“We all have to work together, and to do that, we’ve got to keep our eye on the ball with respect to managing the Boise River. It’s a dynamic process, and as much as we might try to stop it or manage it, the Boise River is going to flood again, and we’d better be ready.” For more information about Flood Control District #10, go to boiseriver.org.