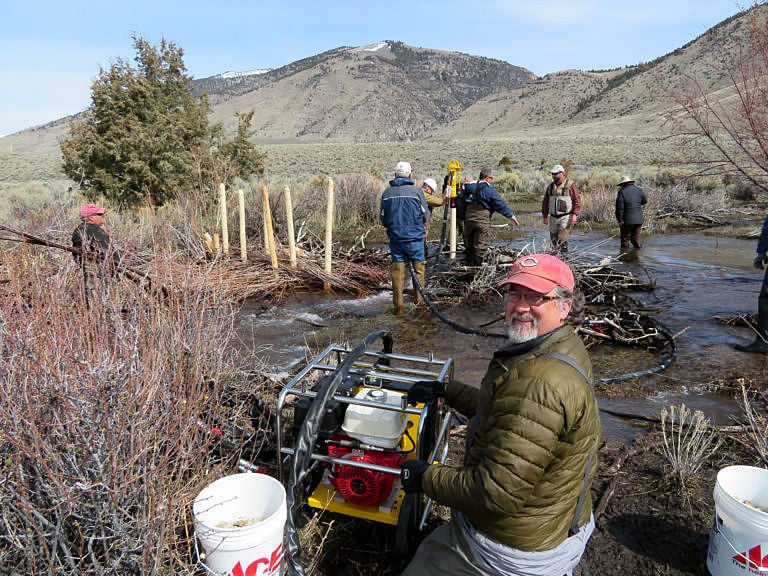 Hydraulic post-pounders help speed up the process of driving wooden posts into the water at Hawley Creek near Leadore. 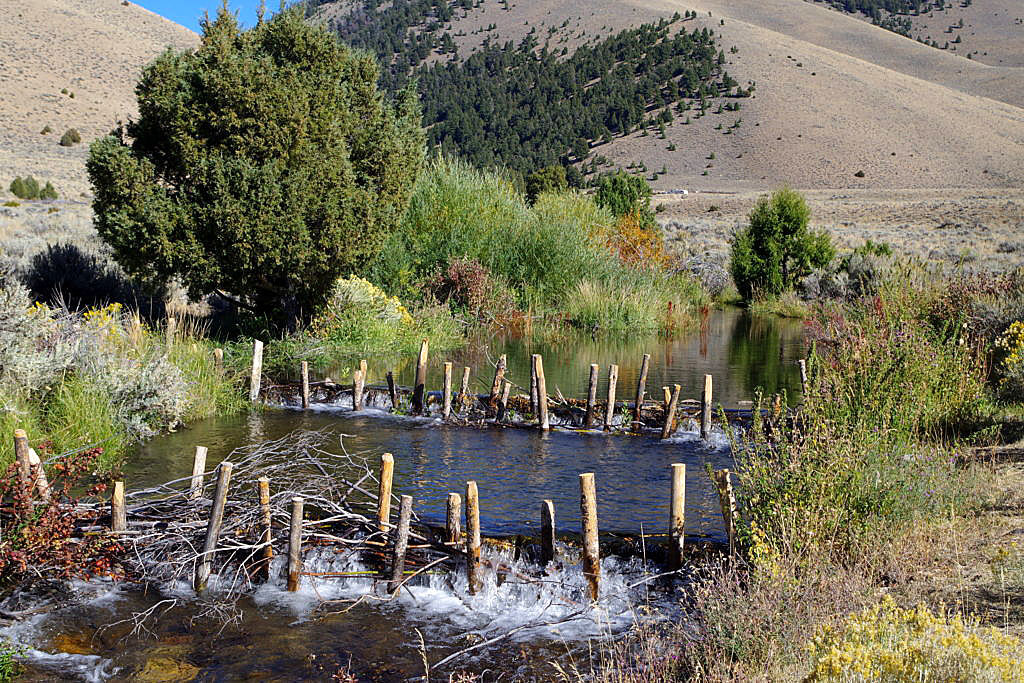 New, more efficient irrigation diversions and the Hawley Creek beaver dam analogs have restored water flows to the stream on a year-round basis. Riparian vegetation has come back with a vengeance along the stream near Leadore.

Hydraulic post-pounders help speed up the process of driving wooden posts into the water at Hawley Creek near Leadore.

New, more efficient irrigation diversions and the Hawley Creek beaver dam analogs have restored water flows to the stream on a year-round basis. Riparian vegetation has come back with a vengeance along the stream near Leadore.

Landowners and conservation professionals are excited about a new type of woody structure that mimics beaver dams. The benefits are similar — they store water, slow down runoff in streams, and enhance fish and wildlife habitat.

Bruneau Rancher Chris Black worked together with a number of conservation professionals to install some BDAs on his private land on Hurry Up Creek, a tributary of Deep Creek.

“I’ve wanted to get beaver in here for years but it is an ephemeral stream,” Black said. “There’s enough willows to make good food for them and everything, but there isn’t enough water for them to stay.”

They’ve put in about 10 structures so far, and more are planned in the future.

“They came in and put them in very successfully,” he says. “They’re backing water up, they’re creating habitat for spotted frogs, for sage grouse, for beaver.”

Conservation professionals with the Governor’s Office of Species Conservation, U.S. Fish and Wildlife Service, Idaho Department of Fish and Game and the Natural Resources Conservation Service are all interested in exploring the benefits of using BDAs to improve riparian habitat and store water.

“It just benefits a whole host of wildlife species and that’s why Fish and Game is really interested in this,” Chris Yarbrough, Fish and Game habitat biologist said. “It’s a low-cost way to get a lot of bang for your conservation buck.”

Experimenting with BDAs on Black’s property was a natural fit, officials said, because it adds value to a number of conservation projects that have been completed in the area. Plus, there’s a healthy population of sage grouse living nearby. That’s why the Sage Grouse Action Team was excited about the opportunity.

“We needed to figure out how to put these dollars on the ground in the best way possible, and leverage what’s already being done,” says Josh Uriarte, a project manager for the Governor’s Office of Species Conservation.

“I think it will benefit sage grouse in terms of expanding the sponge, that green line of habitat will bring in the sage grouse, and have more of a grocery cart for them when they come to the store, if we provide more of a green line for them, it’ll help during late brood season,” Uriate said.The Hawley Creek project is far more complex in many respects. With about 25 BDAs in place, it’s been turned into a perennial stream. But the objectives of the project are similar — to improve habitat for fish and wildlife and work toward providing season-long flows for endangered salmon, steelhead and resident fish.Hawley Creek is a tributary of the Lemhi River near Leadore at an elevation of 6,000 feet. The project has a major irrigation component for ranchers who have long-time water rights on the stream. Daniel Bertram with the Governor’s Office for Species Conservation in Salmon spent several years planning the project to make sure it worked for everyone.

“There were two years of negotiations to ensure that there was no harm to the irrigators,” Bertram said. “We need to make sure that we keep the agricultural community healthy and vibrant, through these projects, and I personally don’t think there’s any reason why we can’t have both agriculture and anadromous fish thriving.”

“The Hawley Creek BDAs are a small part of a much larger project on Hawley Creek to restore riparian habitat and improve fisheries habitat,” said Linda Price, BLM field manager in Salmon. “We thought it was a great idea.”

Ultimately, the new project configuration with an enclosed pipeline and pivot irrigation was more efficient, conserving water to restore season-long flows to Hawley Creek. It had been dried up for 100 years.

“By holding this water higher in the drainage, we’re not only providing habitat for native fish and anadromous fish, but we’re also providing irrigation water later in the season when they need it as well,” Bertram said.

They put in the BDAs with help from the Salmon Youth Employment Program.

“It’s been a really neat project. The kids really like it,” said Max Lohmeyer, project coordinator for the Salmon Youth Employment Program. “It’s a lot like building fence, but it’s not building fence. They get to get in the creek and get wet.”

In both project locations, they used hydraulic post-pounders to install the vertical posts for the BDA’s.“It’s unreal how much of a difference that makes,” Yarbrough said. “We did a couple by hand last year and that took forever. These posts, it takes maybe 5 seconds, 10 seconds, that’s been a huge difference-maker, and now that we have that, are you kidding me? This is a piece of cake now.”The youths used local woody materials such as willows for the horizontal cross-section to slow down and hold back the water flow.

“At first, they were like, why are you building beaver dams? Once they saw the results, they didn’t want to go build more fence, they wanted to build more beaver dams,” Lohmeyer said.

Bertram is pleased with the results so far. He is closely tracking results.

“I couldn’t be happier, to be honest,” he says. “Hawley Creek hasn’t dried up, and it’s pretty neat to see where it’s come, and see the benefits for the private landowners and also to the ecosystem.”

Season-long flows to Hawley Creek should provide improved, over-wintering habitat for fish. As the riparian area converts more to a wet meadow, there may be benefits for sage grouse as well.

“By slowing this water down, spreading it out, you can just see the response from the vegetation, the grass growing up, I can hear the grasshoppers in the background, passerines have just exploded, all of the wildlife species and insects have just exploded,” Bertram says. “And we’re already seeing brood-rearing sage grouse coming into this area and utilizing it in the short period we’ve been here. It’s been a huge success story for them, and I’m excited to see how the leks respond over time.”

Bertram has been hosting tours on the Hawley Creek project to share early results. And he’s doing in-depth monitoring to track vegetation and water trends.

“We’ve done a tremendous amount of monitoring,” he says. “Aerial monitoring with high-resolution videography, where we can show the change in vegetation community, and then they have equipment to show ground water depth so we can see what’s happening with the ground water.”

“With all of us coming together, we can create great leaps in conservation, with money and time, and it all comes together,” Black says. “Everyone’s working together, and it becomes a great story for how we can manage these lands in the future.”

Steve Stuebner is the writer and producer of Life on the Range, a public education project sponsored by the Idaho Rangeland Resources Commission.