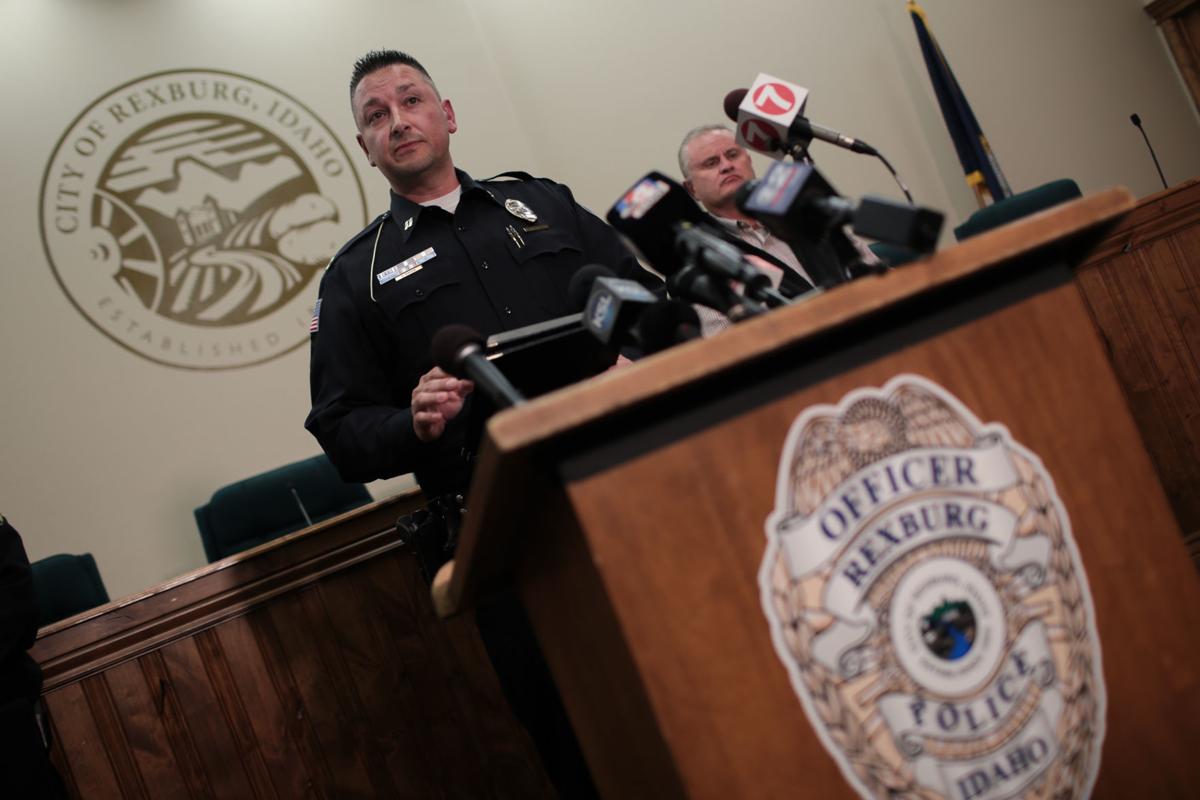 Gary Hagen, assistant chief of the Rexburg Police Department, tells reporters that Chad Daybell will begin hearing proceedings on Wednesday in a closed hearing while speaking to the press at the Rexburg City Hall building on Tuesday, June 9, 2020. Chad Daybell is being held on felony charge of hiding and/or concealing destruction of evidence. 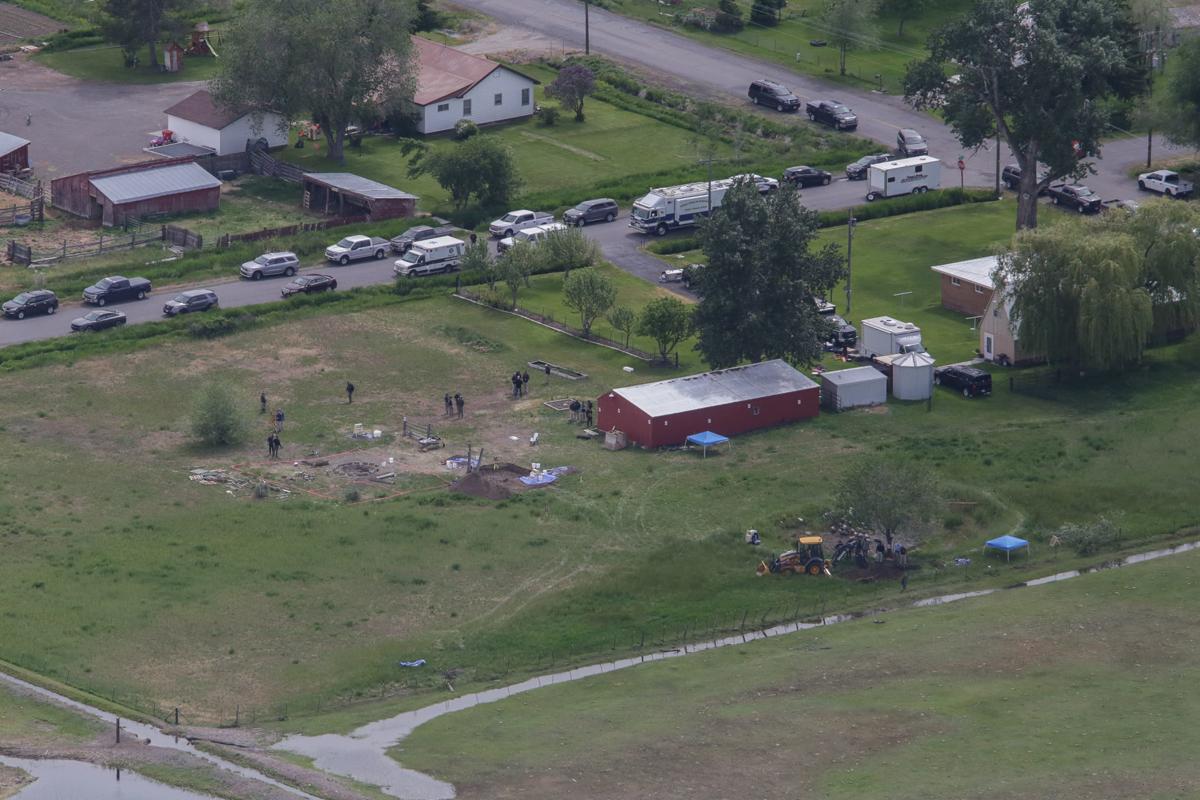 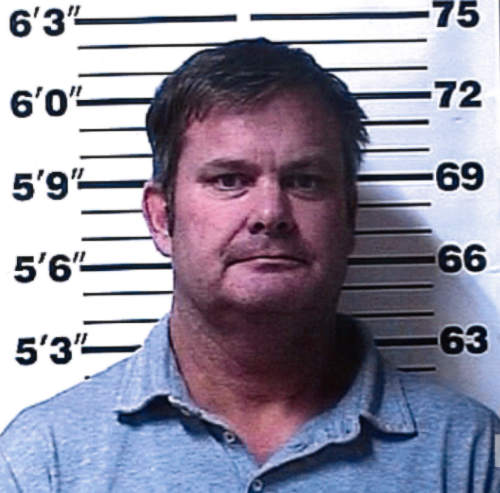 Gary Hagen, assistant chief of the Rexburg Police Department, tells reporters that Chad Daybell will begin hearing proceedings on Wednesday in a closed hearing while speaking to the press at the Rexburg City Hall building on Tuesday, June 9, 2020. Chad Daybell is being held on felony charge of hiding and/or concealing destruction of evidence.

"Both children are no longer with us," Larry Woodcock, grandfather of J.J., told the Post Register.

On Tuesday local and federal law enforcement descended on the Daybell property to serve a search warrant. Using backhoes and shovels, officers could be seen excavating two separate sites in the yard.

Rexburg Assistant Police Chief Gary Hagen later confirmed that human remains from two separate bodies were found. An anthropologist armed with the children’s dental records was on site to assist in identifying the remains. The remains were  sent to Ada County for further examination by forensic experts.

Daybell was taken into custody for questioning and then arrested Tuesday evening. His initial court hearing took place at 11 a.m. Wednesday with Prosecutor Rob Wood, Daybell and Daybell's new attorney, John Prior, participating remotely through Zoom. The only people present in the Fremont County courtroom were Magistrate Judge Faren Eddins and a court clerk.

The maximum punishment for each felony is five years in prison and a $10,000 fine.

Wood requested that Daybell’s bail be set at $1 million.

“I think the background and context of this case necessitates a high bail,” Wood said. Wood said the state finds "the manner of concealment of one of those bodies" to be "particularly egregious."

Prior argued on behalf of Daybell that bail should be $50,000 for each count.

Eddins sided with Wood and set the bail at $1 million.

On Wednesday, family members of the deceased children released statements. Kay and Larry Woodcock, grandparents of J.J., and Colby and Kelsee Ryan, brother and sister-in-law of Tylee, provided this statement to reporter Justin Lum of Fox 10 Phoenix:

"The Woodcocks and the Ryans are confirming that the human remains found by law enforcement on Chad Daybell’s property are indeed our beloved JJ and Tylee. We are filled with unfathomable sadness that these two bright stars were stolen from us and only hope that they died without pain or suffering. Once officially confirmed, statements from the Rexburg Police, the Medical Examiner and the FBI will be released. We ask that you respect our family’s privacy while we grieve -- we have only just been told of the loss of our loved ones and need time to process. We are not granting interviews at this time and hope you all understand that this is the worst news we will ever get in our lives and want to be left alone for the time being."

“Thank you for the overwhelming outpouring of love for Tylee and JJ throughout this crisis. My family and I eagerly await the results of the identification of the remains and autopsies but have hope that there will be resolution and closure in the near future.

"As sad and taxing as this protracted investigation has been, I’ve been deeply touched by the heartfelt expressions of grief, kindness, and support throughout this process. Tylee and JJ won the hearts of people all across the globe. I’ve seen and have been impacted by both the worst and best of humanity. Hopefully, goodness and justice will win out in the end.

Matt Daybell, brother of Chad, and his wife Heather Daybell, provided this statement to Fox 10 Phoenix:

“The events of the past nine months have weighed heavily on our family -- it has been one of the most difficult things we have ever had to go through. Some in our extended family are still struggling to accept the reality that Chad could have been involved in something so terribly wrong.

"On behalf of myself, my wife Heather, and our four children, we express our most sincere sympathies to Larry and Kay and to J.J. and Tylee’s entire extended families. We are devastated by today’s news and the apparent role that Chad has played in what has transpired."

Lori's parents, sister, niece and niece's husband released a statement to the Post Register through their attorney:

"The Cox family -- Janis and Barry, Summer, Melani and Ian -- is deeply saddened by the recent findings in the investigation into the whereabouts of J.J. and Tylee. Their love for them knows no bounds. The family has maintained a strong hope and belief that they were alive and well. With that hope and belief apparently shattered, they struggle to find comfort and hope in this potential new reality. They miss J.J. and Tylee very much. The family is very grateful to those who have expended so much time and effort in trying to locate them. The family expresses their deep and abiding love for J.J. and Tylee. The family will continue to closely watch the developing situation and will anxiously await the pending conclusions with heavy hearts. The family extends their gratitude to all those who have expressed their love and concern for J.J. and Tylee and feels the strength of their faith and prayers."

The two children have been missing since September. Daybell has been under investigation for months regarding the disappearance of the children. Daybell and his second wife, Lori Vallow -- the mother of J.J. and Tylee -- fled their Rexburg apartment the day after police attempted to conduct a welfare check on the children. The couple was later found in Hawaii. Vallow was extradited to Rexburg in March and remains in the Madison County jail in lieu of posting $1 million bail.

Tuesday’s search was the second time a search warrant was served on the Daybell property. The first time was on Jan. 3 in relation to Chad’s deceased wife, Tammy Daybell. Rexburg police have said Tammy’s death on Oct. 19, 2019, occurred under suspicious circumstances. Chad married Lori Vallow on Nov. 5, 2019.

Vallow is charged with two felony counts of desertion and nonsupport of dependent children as well as misdemeanors involving resisting or obstructing officers, criminal solicitation to commit a crime and contempt of court.

A new case has been filed against Lori Vallow in Fremont County for two charges of conspiracy to conceal evidence.