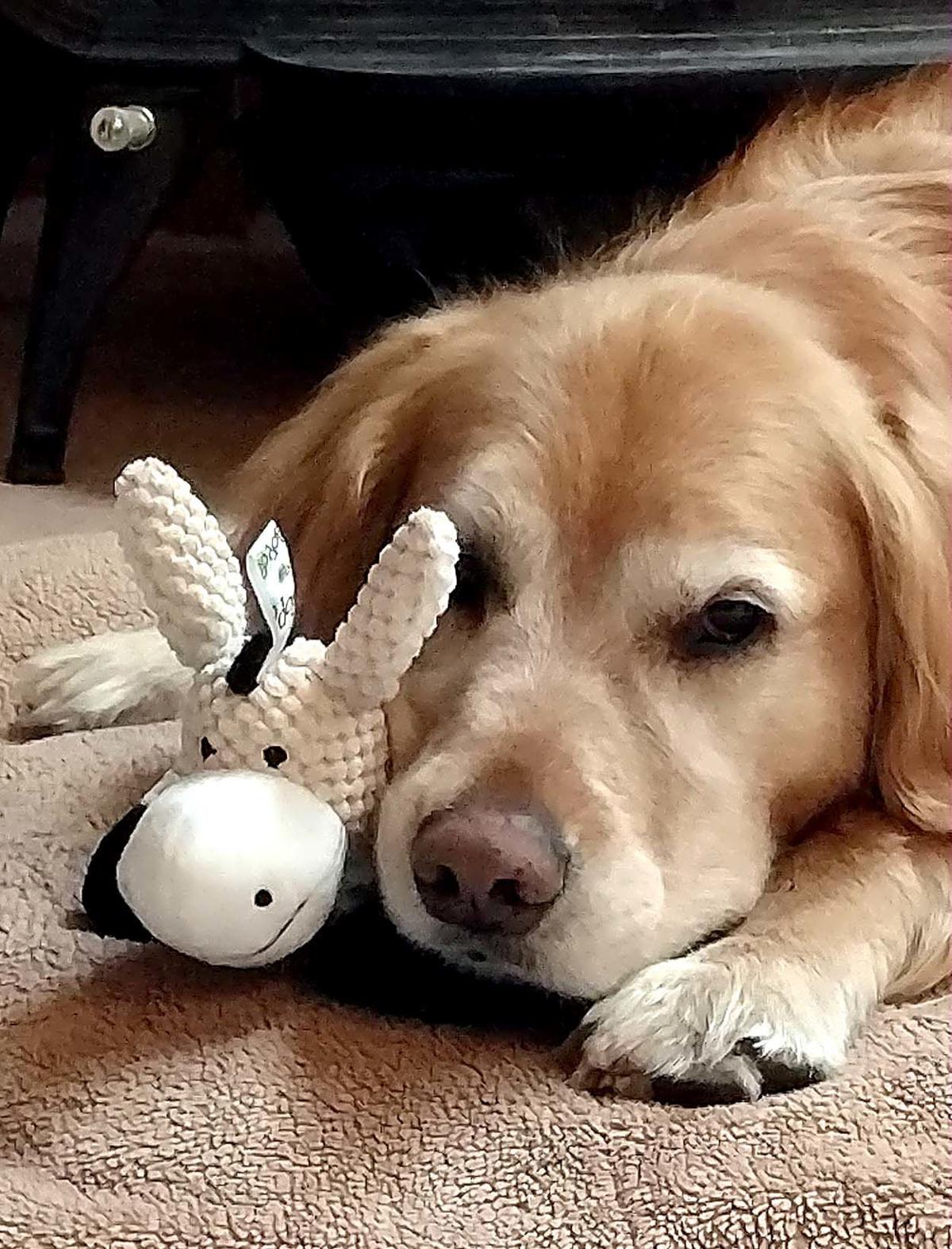 Traeger, a golden retriever, was caught in a wolf trap for about 90 minutes in January. The trap was illegally placed on Trail Creek Road above Mackay. He has recovered from his injuries. 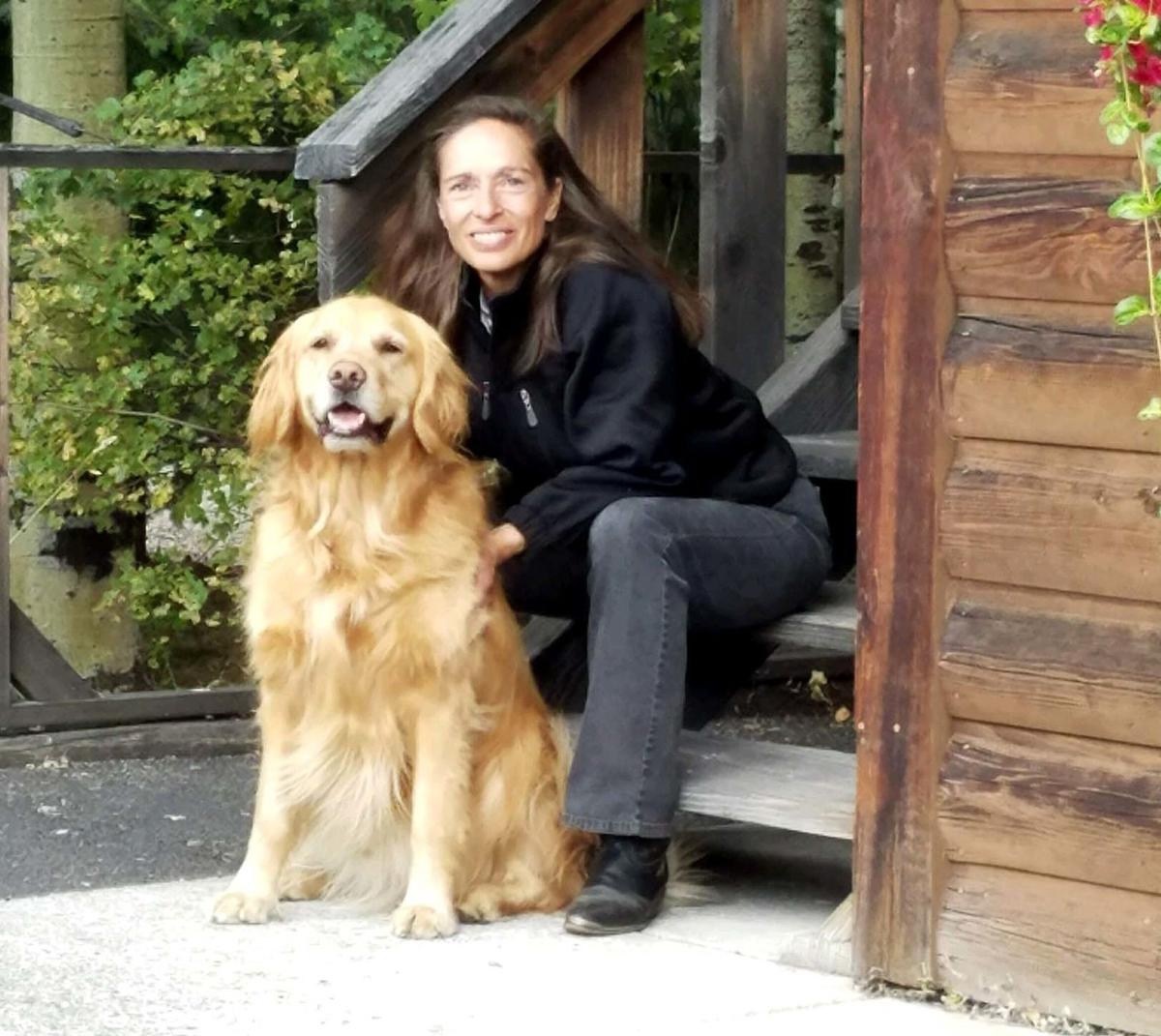 State Sen. Michelle Stennett of Ketchum sits with her golden retriever Teagan. The dog got caught in a wolf trap and Stennett also suffered injuries when she tried to free him. The unmarked illegal trap was on Trail Creek Road above Mackay.

Traeger, a golden retriever, was caught in a wolf trap for about 90 minutes in January. The trap was illegally placed on Trail Creek Road above Mackay. He has recovered from his injuries.

State Sen. Michelle Stennett of Ketchum sits with her golden retriever Teagan. The dog got caught in a wolf trap and Stennett also suffered injuries when she tried to free him. The unmarked illegal trap was on Trail Creek Road above Mackay.

The bright sun along Trail Creek Road above Mackay drew three women and a dog out for an afternoon hike on Jan. 2, but the chilly day turned cold after the dog was caught in a wolf trap for about 90 minutes, rescued only because two men happened by and were able to release the trap.

Ketchum resident Michelle Stennett and two friends headed out for the new year hike on a county road in Custer County, an area they’d visited many times to hunt for Christmas trees, fish, camp and cross country ski.

“I had been in the same area just three weeks earlier with friends on a Christmas tree hunt,” she said.

They had walked about 4 miles when Stennett heard her dog scream.

“I knew immediately he was in a trap,” she said of her golden retriever named Teagan. When she got to the dog a short distance away, his face was buried in the snow and she first thought his head was stuck in a trap. So she reached down to grab him and “he shredded my hands,” out of fear and pain. Stennett could tell Teagan was in a wolf trap because the trap had an anchor stuck into ground and a chain on it. The trap is designed to be opened with special equipment, a device similar to a crowbar. That’s not exactly a common item carried by hikers, Stennett pointed out.

The trap was on the road, near a turnout, in a spot she described as “concerning and not legal.”

It’s illegal to place wolf traps within 10 feet of the edge of “any maintained, unpaved public trail,” “across or within any public highway” or within 300 feet of designated public campgrounds, trailheads, paved trails and picnic areas, according to Idaho Department of Fish and Game rules.

Teagan’s leg and paw were caught in the trap up to his knuckle, she said. Stennett and her two friends were unable to open the trap. There was no cellphone reception. So her friends decided to walk back to the vehicle and go seek help. Stennett stayed with Teagan to keep him calm and prevent him from bleeding out.

“He went into shock,” she said. “He soon wasn’t fighting me.”

Stennett is grateful that after an hour and a half or so two men came by. “They jumped out of their pickup and I asked them to help.” The men were good-sized guys, she said, and after several attempts their combined body weight of about 400 pounds was finally enough to open the trap so she could get Teagan’s paw out.

She and her friends still had to drive about two and a half hours to get Teagan to a vet and then Stennett to an ER where her hands could be treated. The dog sustained bruising and tissue damage, but miraculously his leg wasn’t broken. “We were able to save his leg,” she said.

Stennett spent six weeks in a brace on one hand. Her other hand “was just like him,” she said, “bruising and tissue damage.” Both of them have recovered well, she said last week. She still experiences some swelling in her hands, but it’s not severe.

In Idaho trappers are required to tag their traps with a metal tag that states the trapper’s name and address or the six-digit number assigned the trapper by Fish and Game.

This trap had no tag, Stennett said. “There was no tag, no identification, no Fish and Game medallion,” she said. “I don’t know who it belongs to. It wasn’t registered to anyone.”

Stennett reported the incident to Fish and Game, but because the trap had no identifying information, when they asked whose trap it was, she didn’t have an answer.

“They asked if I had the trap. It was frozen in the ground. I couldn’t remove it,” she said. Fish and Game personnel asked if she could take them to the site of the trap. Stennett, an Idaho state senator, was in Boise in session at that time.

Stennett realizes it’s unlikely Fish and Game employees will determine who set the trap. But her bigger concern is that the trap’s location wasn’t marked. Trappers are not required to identify trap sites. Trappers can print out posters from the Fish and Game website and post them, but that is not a requirement and not a common practice in Custer County.

“I’m concerned about how little warning anyone had that a trap was there,” she said. “There are lots of people out in that area recreating. I don’t know what would have happened if a child got in that trap. Bird dogs are at risk, horses are.”

Stennett and Garrick Dutcher, program research director with Living With Wolves, both believe Idaho’s laws favor trappers not recreationists in such instances. There are 2,000 registered trappers in Idaho, about 250 of whom are licensed to trap wolves. Officials with the Idaho Department of Parks and Recreation reported that 7.7 million people visited Idaho state parks last year. An estimated 80 percent of Idaho residents head outdoors to recreate every year on public lands.

“There’s got to be a way we can all recreate together,” Stennett said. “We have to really think about how we can manage and address the notice requirements. It’s unfair to people who have a right to be on public land.” Some 62 percent of the land in Idaho is public, Dutcher pointed out.

Stennett wants her colleagues on the Senate Resources and Environment Committee to look at trapping regulations more closely.

“Idaho receives billions of dollars in revenue from recreationists every year,” Stennett said. She worries the state’s tourism industry could lose money because visitors stop coming out of concern about the state’s trapping regulations, lack of notice of traps and potential injuries.

Idahoans support trapping and “wanted it enshrined in the constitution,” she said. “I know it’s not going away. But it’s unfair that it’s to the detriment of many and the benefit of few.”

It would be easy to require traps to be marked or flagged, Stennett said. Opponents of that suggestion have told her people would then steal the traps. “A handful might, but people aren’t going to steal traps,” she counters.

Dutcher notes that it’s “a really small number of people putting the rest of the people at risk,” with unmarked and sometimes illegal traps.

In 2020 Fish and Game commissioners rejected a proposal to require that trap locations be marked with signs.

At their March 18 meeting, Idaho Fish and Game commissioners expanded wolf hunting and trapping opportunities. The commission expanded wolf hunting to year-round in much of the state. Year-round wolf trapping was approved on private property in all but two hunting units in the state. Wolf trapping on public land now opens Oct. 10 in much of southwest and south-central Idaho. The previous opening date was Nov. 15. Wolf trapping remains closed in units 48 and 49 in the Wood River Valley and the portion of units 38 and 39 within Ada County, near the Boise foothills, according to a news release from Fish and Game. Idaho has 99 hunting units.

“We believe it’s time for the federal government to ban trapping on public land,” he said. “There are so few people engaged in trapping and it represents a threat to many people.”