News
Elections
Sports
Obituaries
Opinion
Features
Milestones
Calendar
Classifieds
Read the E-Edition
Make An Announcement
Subscriber Services
Site Services
Browse the Archives
Welcome to our new website. We have a new login system for you to access the full newspaper online. Please click here to learn how to activate your new account. Bear with us as we move into this new site and bring over all our old articles and photos.
Activate Now
1 of 3 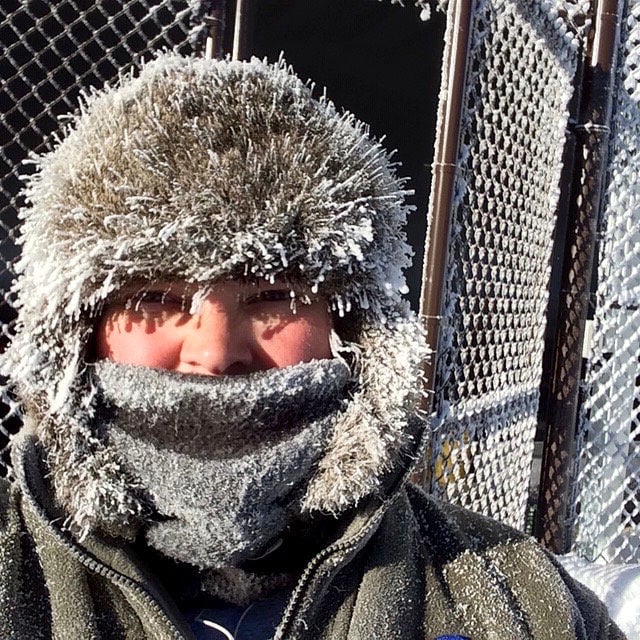 Condensation from Sylvia Hamilton’s breath freezes and collects on her cold weather gear during a cold snap at the Sawtooth Hatchery at Stanley. She’s the assistant manager at the facility. 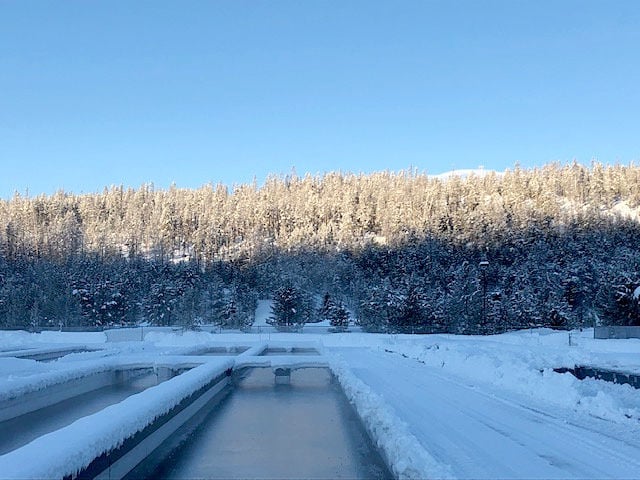 Snow and ice collect around the raceways at the Sawtooth Hatchery at Stanley. Fish and Game employees routinely scrape the white stuff away. 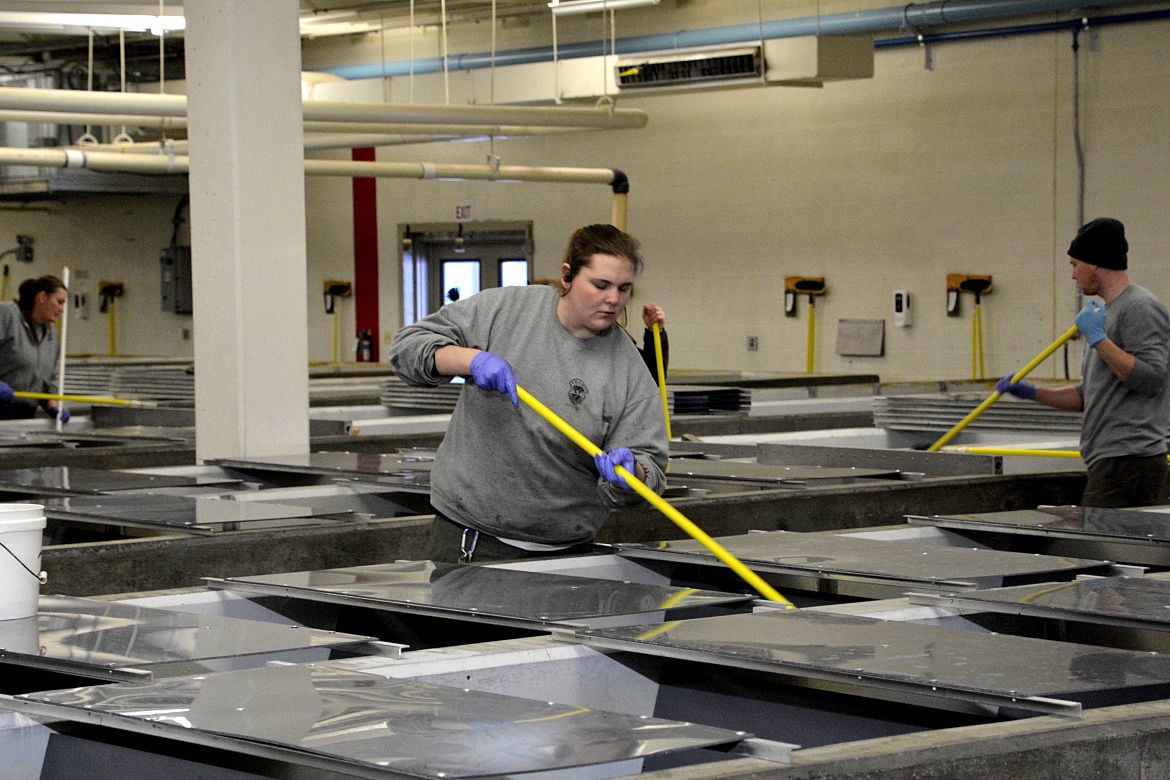 Condensation from Sylvia Hamilton’s breath freezes and collects on her cold weather gear during a cold snap at the Sawtooth Hatchery at Stanley. She’s the assistant manager at the facility.

Snow and ice collect around the raceways at the Sawtooth Hatchery at Stanley. Fish and Game employees routinely scrape the white stuff away.

Anglers hoping to catch a Chinook in 2022 in the upper Salmon River probably aren’t thinking about Tony Folsom and his crew at the Sawtooth Hatchery near Stanley.

But Folsom, the hatchery manager, and his crew are working to produce the next generation of Chinook that will be released during spring and perhaps eventually return so anglers can catch those prized adult salmon more than 900 miles from the ocean.

On Jan. 7 it was an almost-balmy day at the hatchery with high temperature about 10 degrees above freezing.

Fish culturist Andrew Niebuhr and Folsom worked around the hatchery’s outdoor raceways where juvenile salmon, known as smolts, are being reared. Niebuhr and Folsom got the rare chance to shed a couple of the layers of clothing their jobs typically require as they cleared accumulated snow from the metal walkways that span the hatchery raceways.

Running water is the lifeblood of the hatchery, but winter temperatures can be sub-freezing for days, if not weeks, and sub-zero temperatures are common.

“I think during winter, what would surprise most people is the conditions we often deal with, and the difficulties they present,” Niebuhr said.

Aside from the Arctic temperatures, snow removal on the hatchery grounds is a near-daily task for utility craftsman Andy Gunderson.

The hatchery’s water supply comes from the Salmon River, which frequently freezes and threatens to clog the intake that feeds water through the outdoor raceways. Inside the hatchery is equally challenging, Niebuhr said. The hatchery’s outdoor raceways where some young salmon live will ice over and become snow covered like frozen rivers. Fish metabolism slows, and so does their appetite, which means they don’t need to be fed to survive when they’re under ice. But the fish still require circulating water through the raceways to survive.

“When the temperature drops to 20 to 30 degrees below zero, you get a lot of slush and ice building in the river,” Niebuhr said. “It just takes some good old elbow grease to keep the water flowing. We strap on some waders and hop in the river to break up the ice, and get the slush flowing so that it doesn’t clog our river intake.”

Cold water also presents challenges to growing fish. Because water temperatures can drop so low, fish grow slower at Sawtooth than they do at other hatcheries, such as spring-fed hatcheries with consistent flows of warmer water. Young salmon typically spend about 18 months at the Sawtooth Hatchery before being released into the Upper Salmon River to migrate downstream to the Pacific, and most of their growth occurs between mid-May and mid-September when warmer water temperatures spark their appetite and allow rapid growth.

Even with all the work involved, it’s a challenging proposition to rear young Chinook at 6,000-feet elevation, then have them swim downstream 900 miles to the ocean and make the reverse migration a couple years later.

The Sawtooth Hatchery tries to release about 2 million Chinook smolts per year, fewer than 1 percent of which will return to the Upper Salmon River as adults, even in the best of years. In order to hit that number, hatchery staff need to collect between 2.2 and 2.4 million eggs in the fall. But 2019 was a tough year for adult returns to the hatchery, which fell about 28 percent short of broodstock needs. About 1.8 million eggs were collected in the fall, and 1.5 million of them survived the “eyed up stage,” which indicates they have been successfully fertilized.

By winter, most of those eggs had hatched, the young salmon have expended their yolk sacs that sustain them as newly hatched salmon, and then it’s up to the staff of five Idaho Department of Fish and Game employees at the hatchery to take care of them until they’re old enough to be released.

While the older Chinook in the hatchery’s outdoor raceways don’t need much attention during the dead of winter, there are more than a million fish nearby that need to be fed and cared for throughout the season in the smaller raceways located in an outbuilding, as well as the incubation and early rearing room. These facilities use well water, which is warmer than the river water, and allows for higher growth rates. It is also pathogen free, which is important in keeping the young fish healthy.

Staff clean the rearing ponds and feed the fish daily, making sure the fish are getting enough food, and keep a watchful eye for any potential issues.

It’s a race with the clock because the goal is to have the young Chinook in the indoor facilities grow to a minimum of 2.25 inches by the time marking trailers arrive at the hatchery in mid-May. The automated trailers clip the adipose fins, which identifies the Chinook as hatchery fish so anglers know which ones they can keep when they return as adults.

After the young fish are marked, they are transferred to the outdoor raceways, where they will be raised by the hatchery staff for another year before being released into the river for their downstream migration.

The ultimate goal of the hatchery is to return enough adults to produce the next generation while also providing Chinook for anglers to catch.