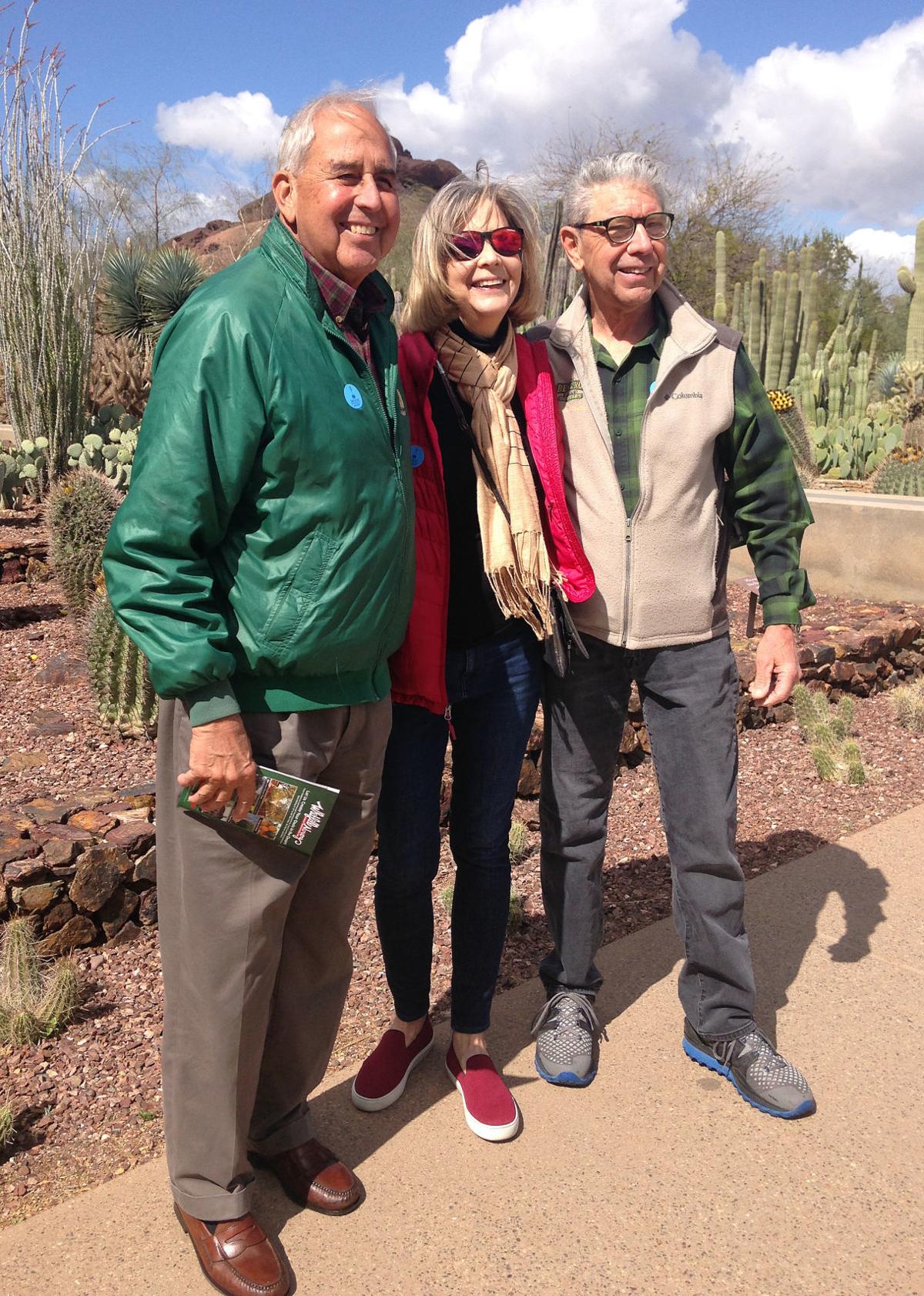 Richard and Sara Reibman, Tom Johnson’s biological brother and sister, pose for a photo with Tom, right, in Arizona in March. The three met each other for the first time this year after learning Tom and another baby were switched at birth in 1941. 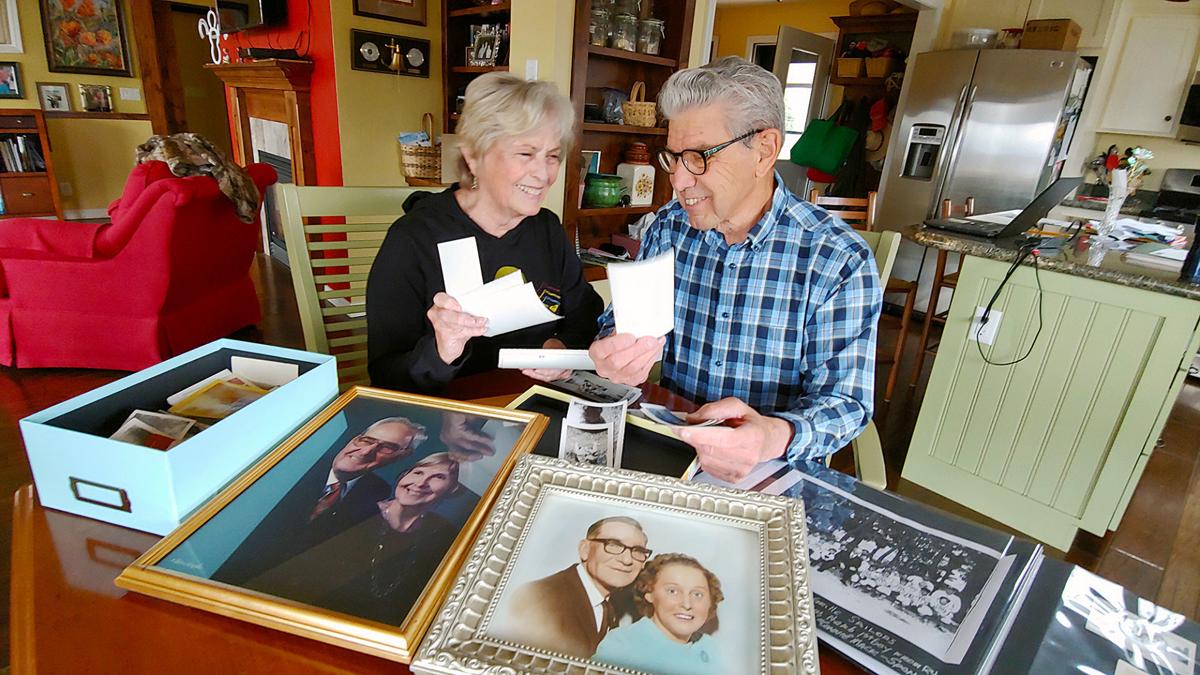 Linda and Tom Johnson look over his expanded family photo collection at their Challis Creek Road home. Tom recently learned he was raised by a family he wasn’t born into. 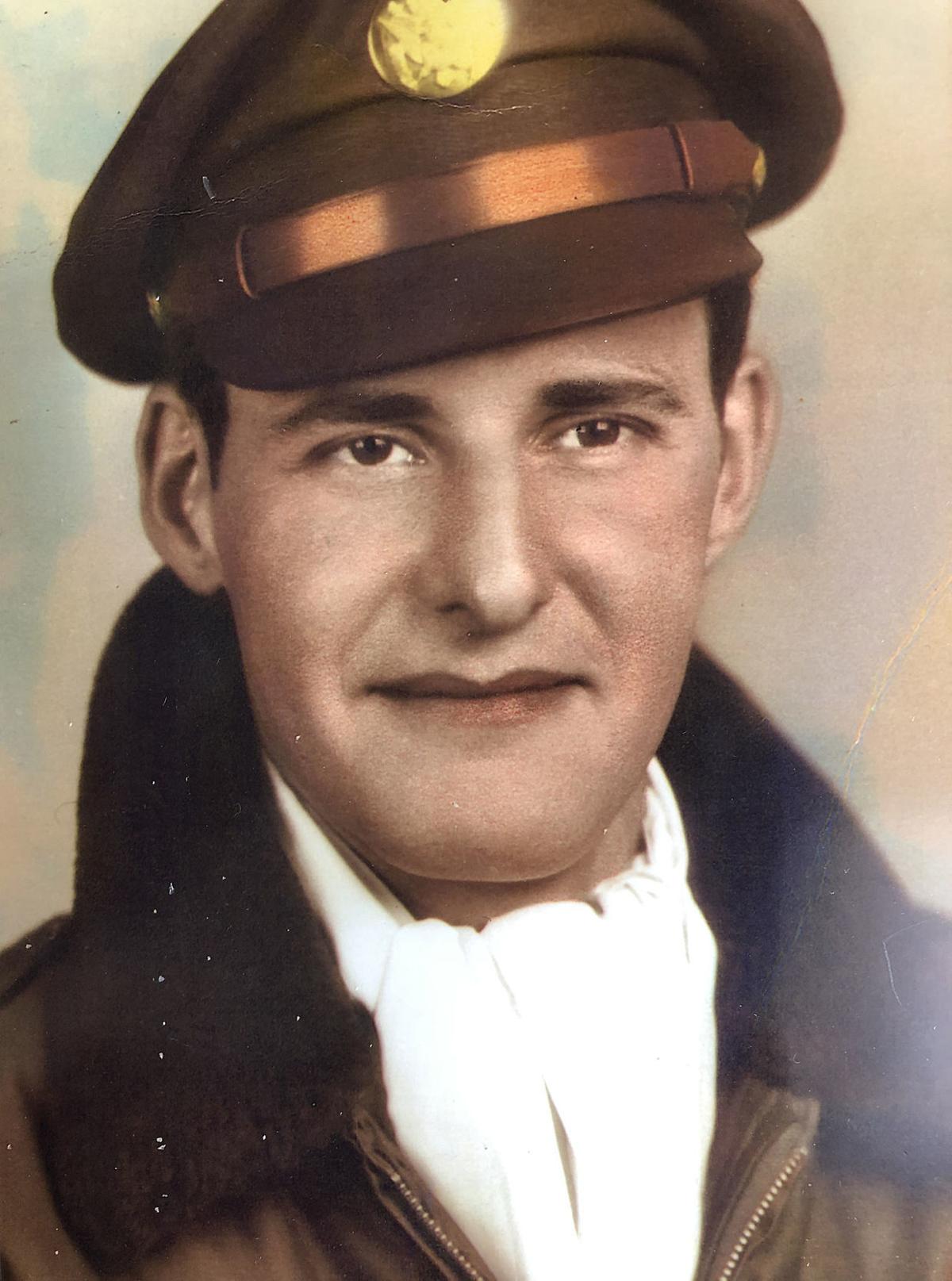 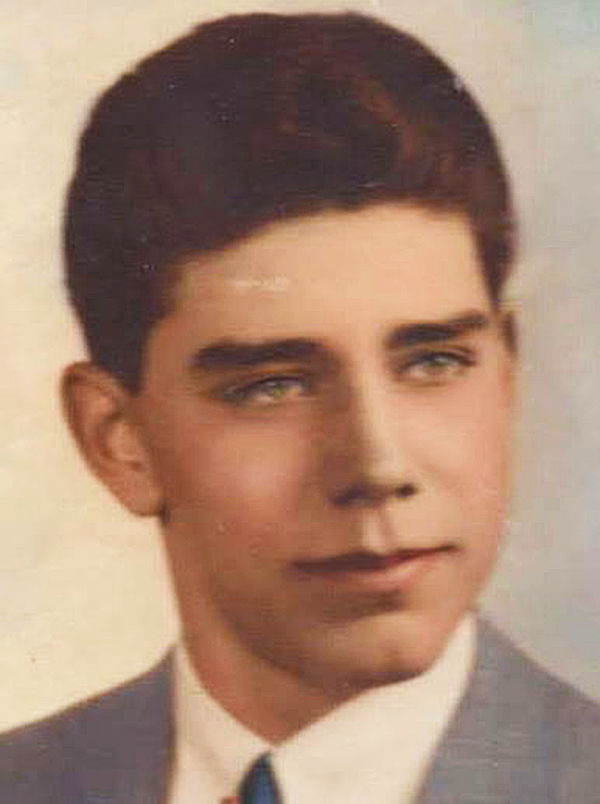 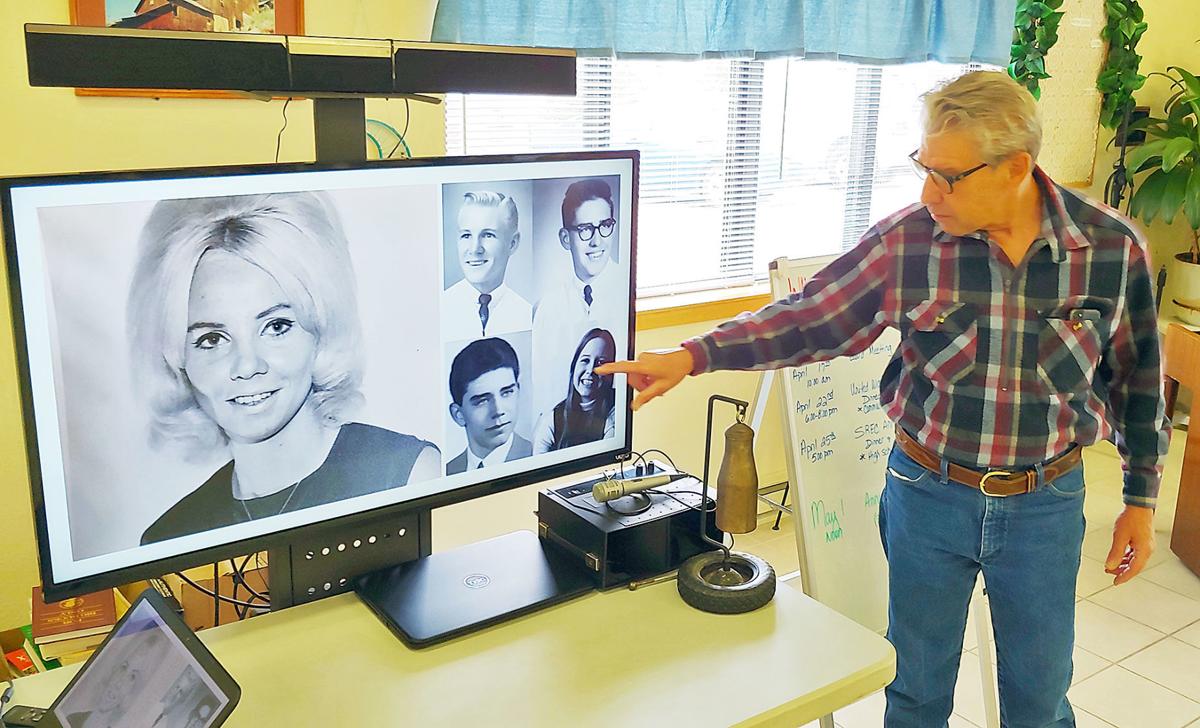 Tom Johnson points to photos of himself and his biological and life siblings as young men and women during a presentation at the Challis senior center. 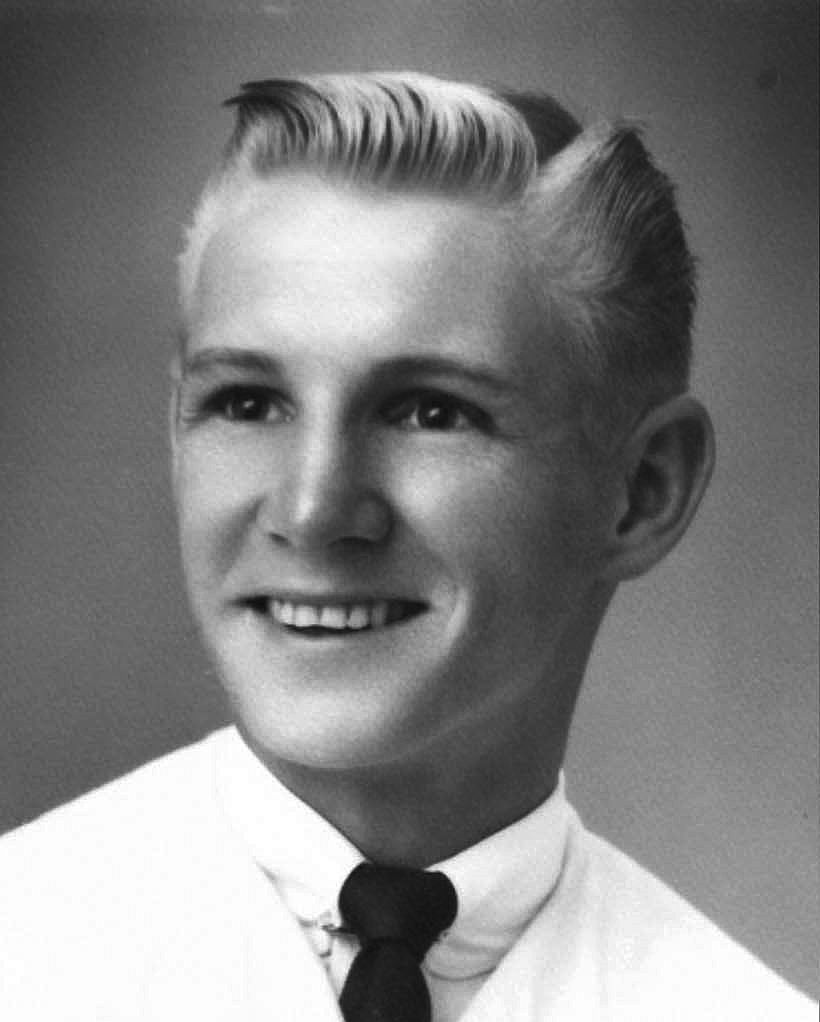 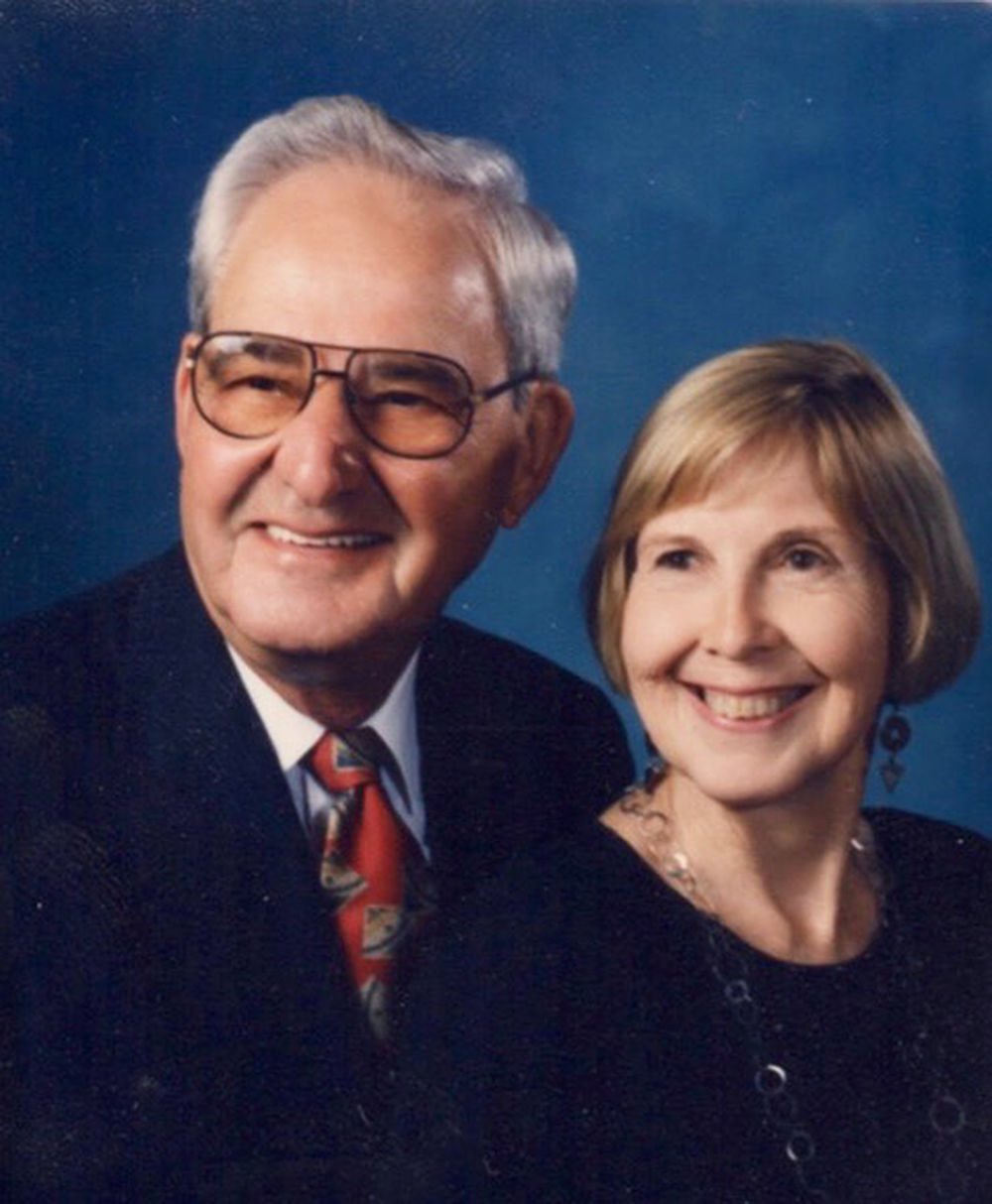 A portrait of Tom Johnson's biological father and mother, Larry and Peggy Reibman. 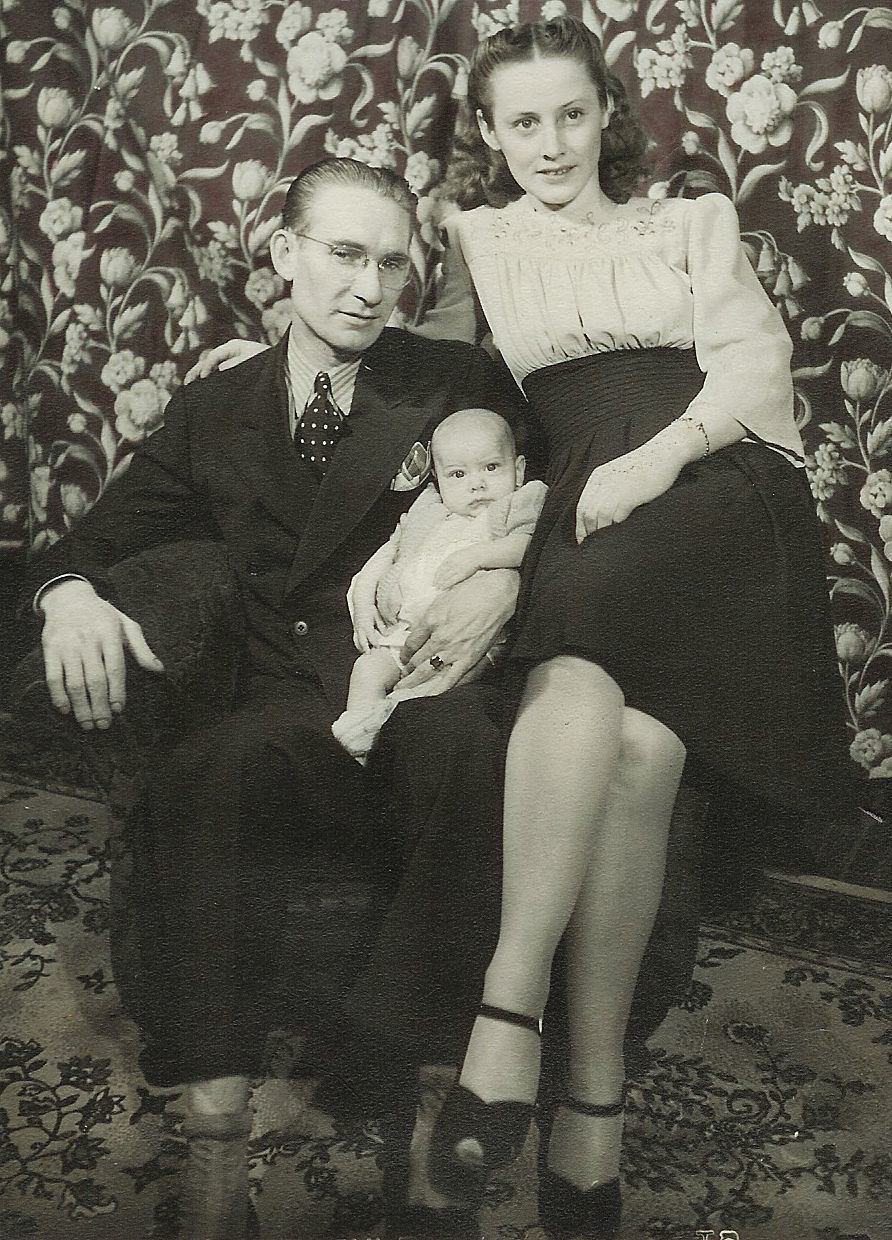 Thomas Edgar Johnson Jr. as a baby with his life parents, Tom and Dorothy Johnson, soon after his birth in 1941.

Richard and Sara Reibman, Tom Johnson’s biological brother and sister, pose for a photo with Tom, right, in Arizona in March. The three met each other for the first time this year after learning Tom and another baby were switched at birth in 1941.

Linda and Tom Johnson look over his expanded family photo collection at their Challis Creek Road home. Tom recently learned he was raised by a family he wasn’t born into.

Tom Johnson points to photos of himself and his biological and life siblings as young men and women during a presentation at the Challis senior center.

A portrait of Tom Johnson's biological father and mother, Larry and Peggy Reibman.

Thomas Edgar Johnson Jr. as a baby with his life parents, Tom and Dorothy Johnson, soon after his birth in 1941.

Switched at birth and raised by another family.

For most people, that’s something far-fetched that happened to somebody else. For Tom Johnson, 77, of Challis, it seemed like a joke at first. Then a genetic test made it real.

Johnson was switched at birth with another baby, Herbert Benjamin Reibman, at Dearborn Diagnostic Hospital near Detroit, Michigan, soon after the Japanese bombed Pearl Harbor on Dec. 7, 1941. As hospital employees and other Americans went about their lives and dealt with the chaos that followed America’s catapult into World War II, babies Tommy and Herbie each went home with the “wrong” parents.

So Tom is actually Herb and vice versa. Tom always thought he was born Thomas Edgar Johnson Jr. at 11:25 p.m. Sunday, Dec. 7, 1941, to Thomas Edgar and Dorothy (Brown) Johnson. It turns out he was born Herbert Benjamin Reibman at 8:30 a.m. on Monday, Dec. 8, 1941, to Larry Reibman and Margaret “Peggy” (Brouillette) Reibman.

If the facts sound confusing, think about the complicated emotions for Johnson, who learned all of this about a month ago, a year after he took a DNA test for fun.

After reality sank in, Johnson’s first feelings were of losing one family, then gaining another. He calls the Johnsons his life family and the Reibmans his biological family.

“I was feeling in shock and I was kind of sad,” Johnson said. “I felt like I was losing them,” he said of the family who raised him. “I felt like I was losing my life family,” especially maternal grandmother Lottie Brown, who raised him during his early years in Columbia, Tennessee. His father was off at war and his mother was “Rosie the Riveter” at a Nashville factory helping build P-38 airplanes.

Tom met his newfound biological siblings, Richard and Sara Reibman, for the first time in Phoenix on March 12, in front of rolling cameras while a CBS Sunday Morning crew, his wife Linda, and members of his biological and life families watched.

Tom and Linda arrived in Arizona a few days prior to rest and wrap their minds around the upcoming meeting. Richard Reibman came from Sarasota, Florida, and Sara from Harlingen, Texas.

Herb Reibman, Tom’s bassinet mate, died of an infection in his mid-50s after sailing from coast to coast in 1996, never knowing the truth. Both sets of parents died before they knew. That was just one more bittersweet feeling for Tom.

“I thought of both mothers,” he said. “They never got to meet their biological sons. That was kind of hurting me. I felt bad for them.”

It all started a year ago, when Tom and his sister, Pat Johnson Mason, decided to get their DNA tested.

“We did our DNA and it was not a match,” Tom said. “We thought there was some error. It wasn’t real. We dismissed it.”

Linda said the test confused them initially, but then they joked about it.

In early January Tom got an email from Susan Reibman Groff, who claimed to be his first cousin. Tom opted to share his DNA test results with possible matching family members when he signed up for the test on Ancestry.com last year.

“(Susan) said ‘I think we’re first cousins.’ I said, ‘I don’t think so. I know all of my first cousins.’” Tom’s life uncle, Andrew “Buck” Brown, died the same day Tom learned he and Susan were cousins. Suddenly it seemed the people he’d always thought of family were not.

Tom and Susan shared family photos and wondered. They figured out that Susan’s aunt and uncle had been in the maternity ward of the hospital at the same time Tom’s parents were and two babies were born within hours of each other during the chaos of Pearl Harbor.

“Things started to come together after that,” Tom said.

Tom and Susan asked other family members to have their DNA tested. Susan’s cousin Sara had her DNA tested and it showed Sara was Tom’s biological sister.

In January, Tom and Linda were making final preparations for their annual snowbird trip to Phoenix. They planned to meet up with their son and other members of Tom’s biological family. Two days before they were to leave, Tom received definitive proof he had an older brother and younger sister he’d never known. Meeting day was scheduled for March 12 at cousin Susan’s home. The meeting was emotional. Tom remembers shedding many tears, mostly of joy.

“It’s a brother and sister you haven’t met in 77 years. It was very emotional and tearful,” he said.

“They had to stop the cameras a couple of times for Tom,” said Linda. “It was harder for him than his brother and sister. They’d already lost their brother, Herbert.”

Growing up, Tom’s aunts and uncles would say, “I don’t know who he looks like. Who do you think Eddie takes after?” His mother’s family in the South said Tom most resembled another uncle, William Elgan “Boo” Brown.

Tom always looked up to his uncle Boo, who was a paratrooper in Korea. Tom served with the U.S. Army’s 82nd Airborne Division in Germany during the Cold War-Vietnam era. He was there during the Cuban Missile crisis.

Tom and Linda started to see resemblances in his “new” family photos, especially when comparing a photo of Tom as a young man to one of his biological father, Army Air Corps Sgt. Larry Reibman, in his World War II uniform. Biological dad flew coastal patrol missions while life dad, Sgt. Tom Johnson, was a mess sergeant with an infantry unit and saw action during various battles in Germany.

Tom’s life family still claims him as their own and he hasn’t abandoned them. He delayed telling them for a month after he found out about his biological family, wondering how it would affect their relationship.

“In the beginning it was me, talking to my life cousins, who are still alive,” said Tom. “They assured me, ‘No, we’ll always be cousins.’”

His surviving life family members include his sister, Pat, and maternal aunt, Barbara Jean Brown Parrish, whom Tom feels particularly close to since they’re only three years apart in age. “You’re always Eddie to me. We love you,” Barbara Jean told Tom.

“At the time, that was a very tearful thing,” Tom said.

Imagine how things were in maternity wards of that era, said Tom’s wife Linda, a retired nurse. How could two babies get mixed up in such a little hospital?

Both mothers, Dorothy Johnson and Peggy Reibman, would have been exhausted after giving birth, and probably fell asleep, Linda thinks. Nurses would have taken the babies from the delivery room, bathed them in another room and returned them to the nursery. At some point, Tom got put into Herb’s bassinet and Herb into Tom’s. With nurses and other Dearborn hospital staff distracted by the news of Pearl Harbor, a mistake was understandable.

Tom looks forward to a rendezvous with biological siblings Richard and Sara in Florida in June. The definition of family has expanded for Tom. For the retired Ketchum fire chief, it includes Linda’s family, firefighting brothers in Detroit and Ketchum, his Johnson and Brown family’s Irish-English heritage, his Reibman family Lithuanian Jewish roots and his biological mother’s French-Canadian ancestry. He hasn’t met all of his family members and probably never will. But he feels kinship with them and he now has a better feeling of his place in the world.

Tom presented his bombshell of a story to friends at the Challis senior center last week.