News
COVID-19
Elections
Sports
Obituaries
Opinion
Features
Milestones
Calendar
Contests
Classifieds
Grants
Read the E-Edition
Make An Announcement
Subscriber Services
Site Services
Browse the Archives
Welcome to our new website. We have a new login system for you to access the full newspaper online. Please click here to learn how to activate your new account. Bear with us as we move into this new site and bring over all our old articles and photos.
Activate Now
1 of 7 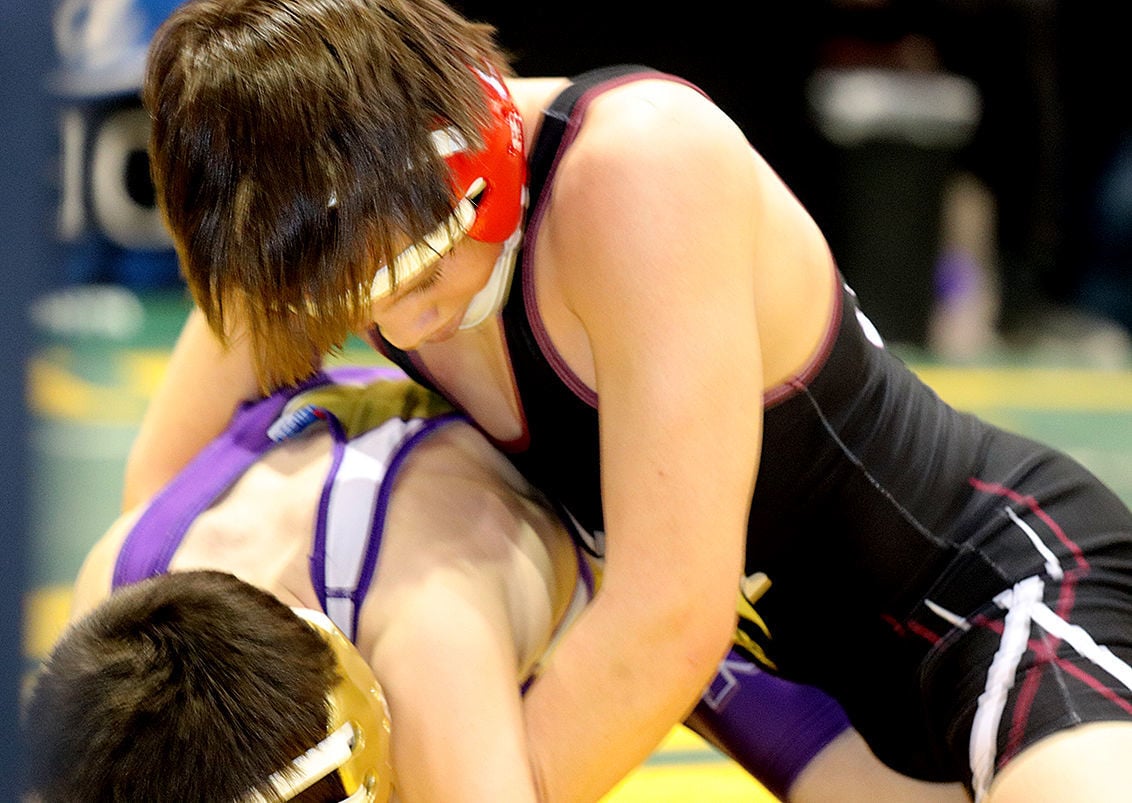 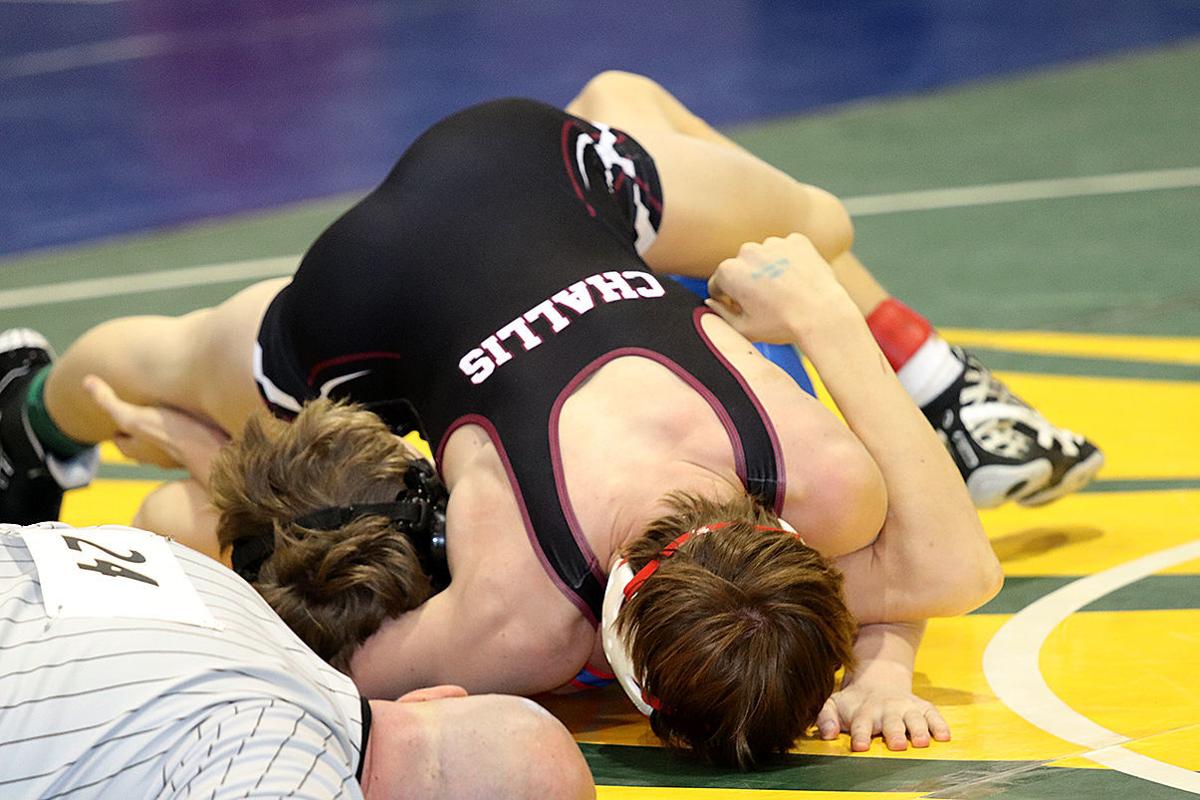 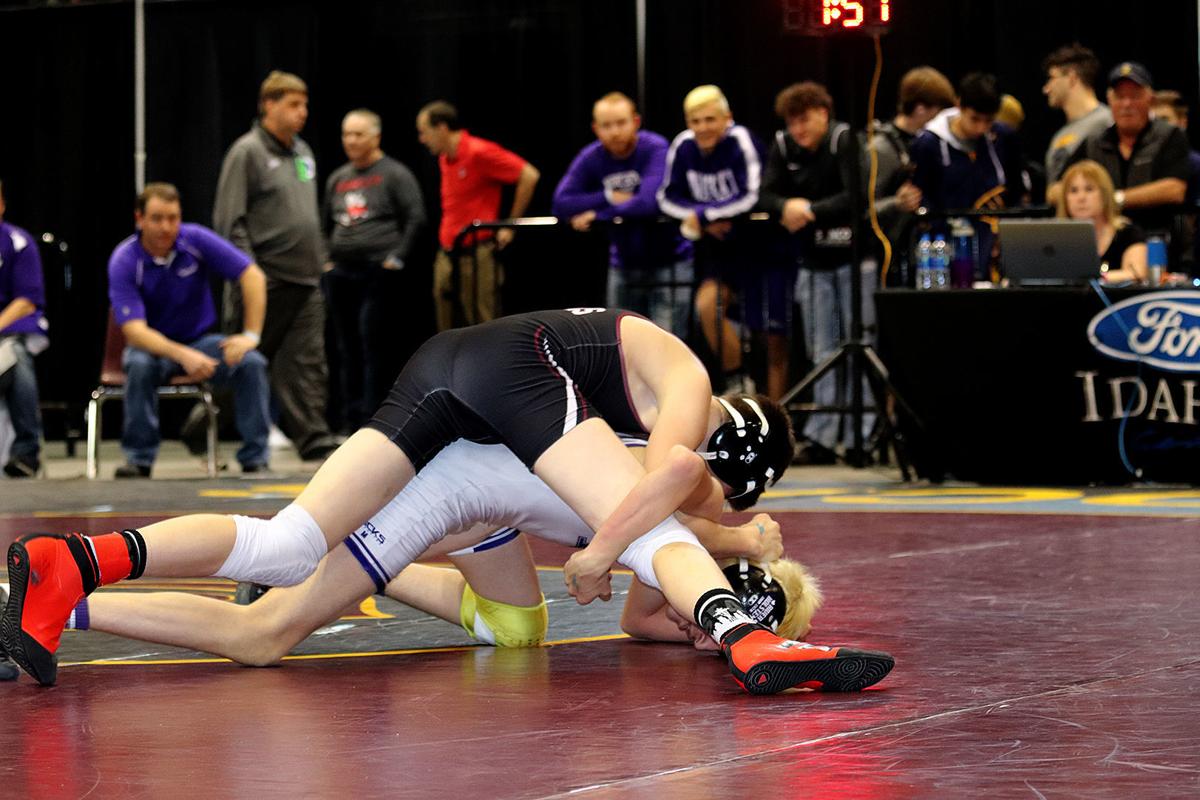 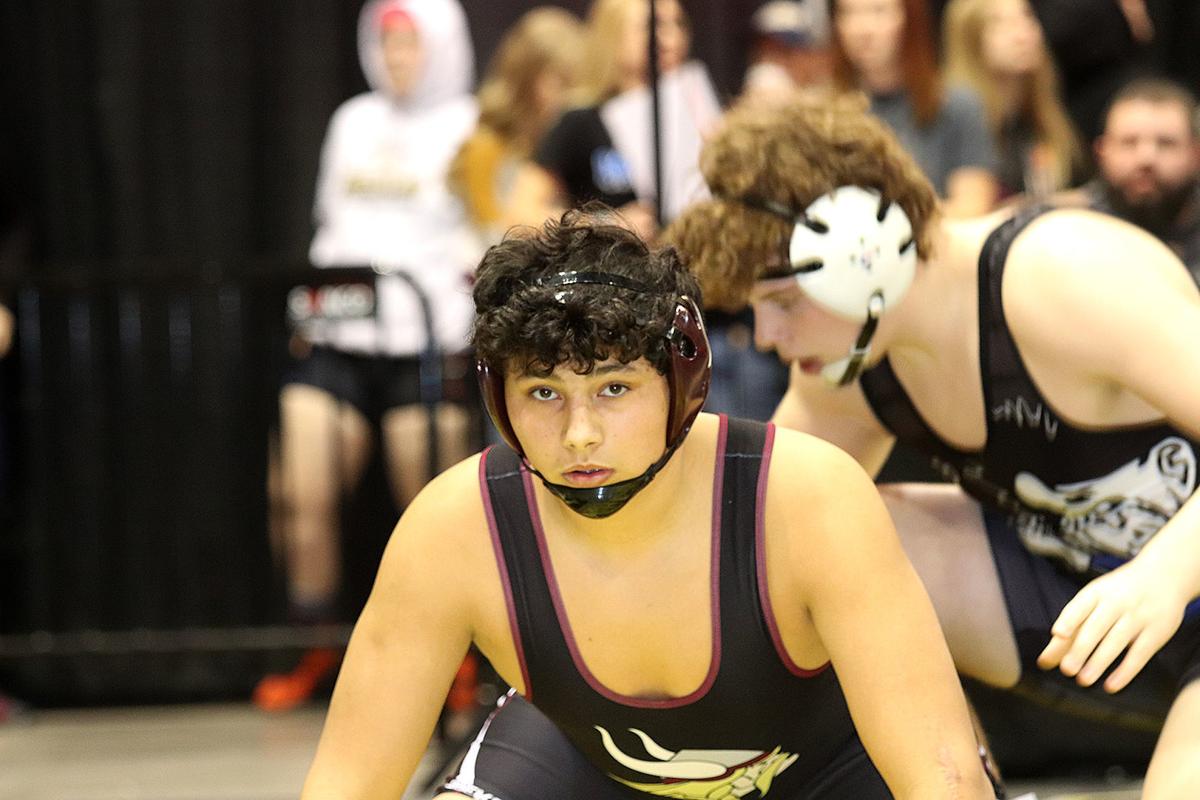 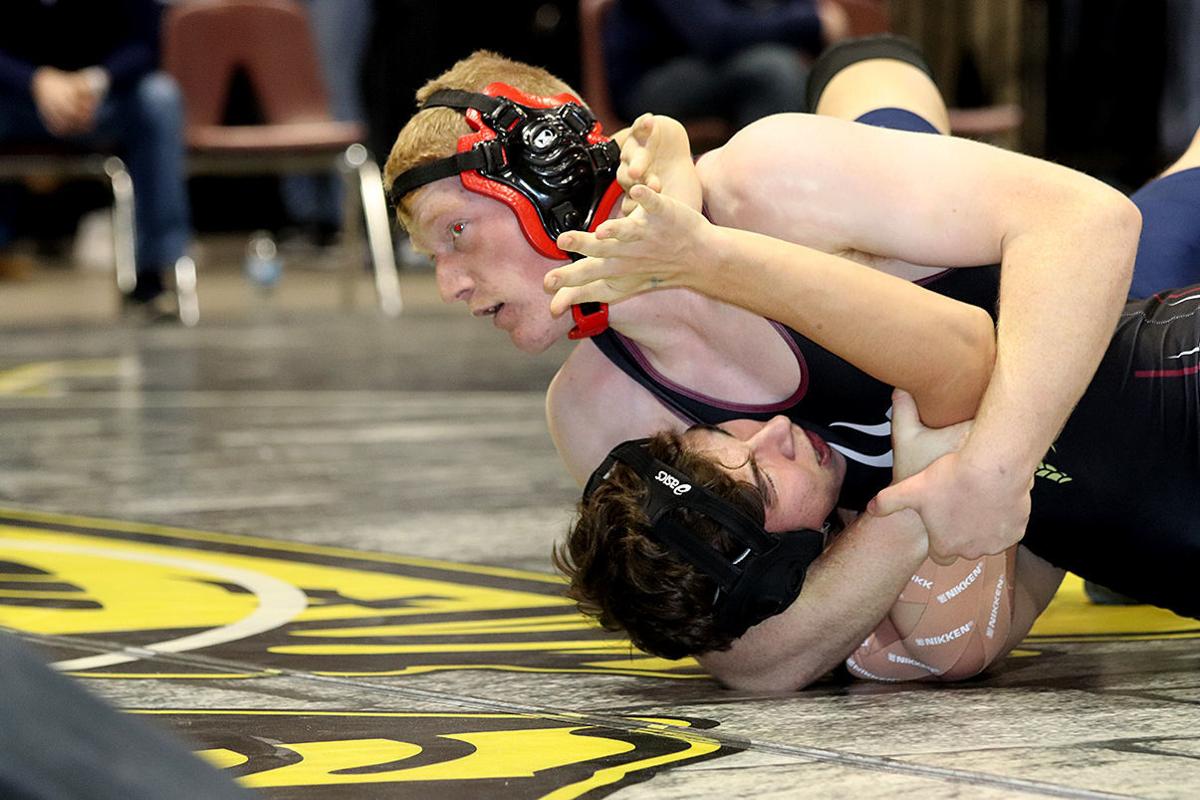 Blackheart wrestler George Cecil wraps his opponent in a headlock in a match at the state tournament. 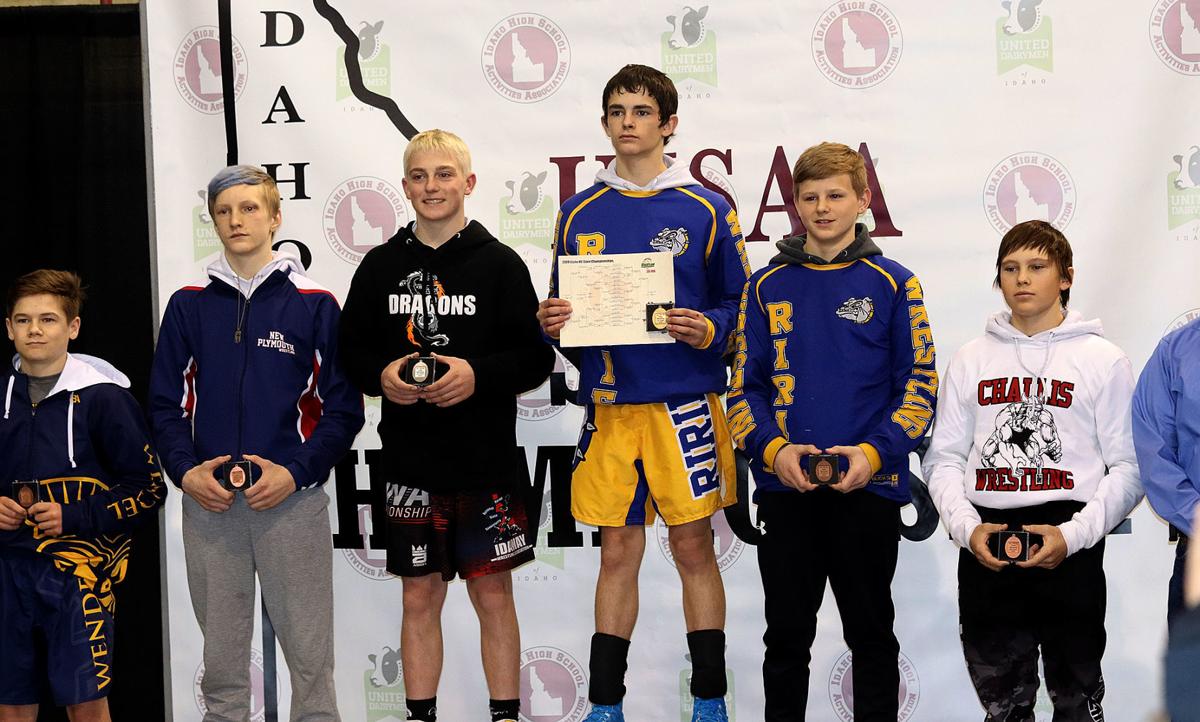 Challis High School wrestler Hoak Corgatelli, right, placed fifth in the 106-pound class at the Idaho state wrestling tournament. He was the lone Blackheart wrestler to bring home a medal. 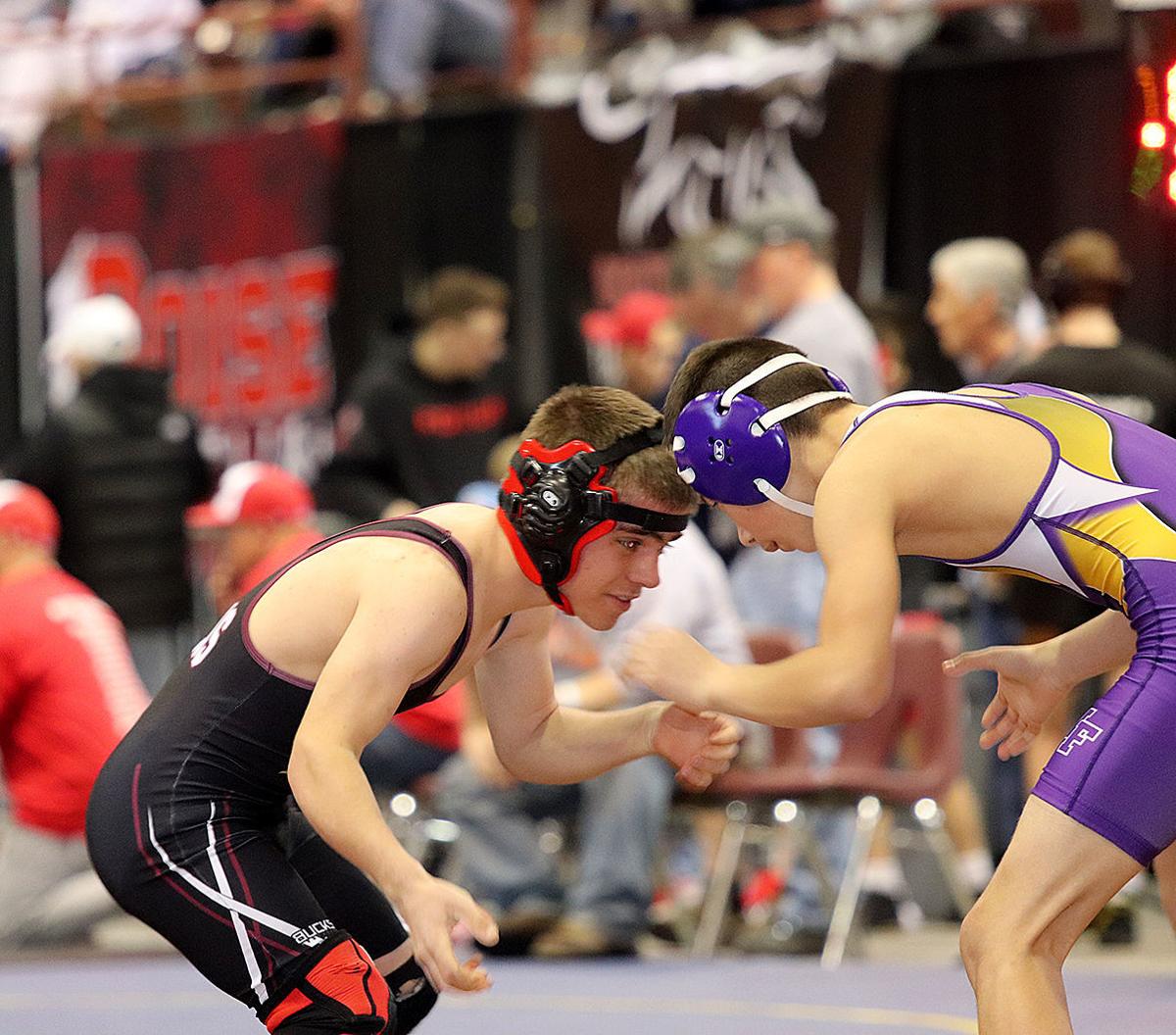 Challis High School wrestler Colton Battley faces off against his opponent at the state wrestling tournament.

Blackheart wrestler George Cecil wraps his opponent in a headlock in a match at the state tournament.

Challis High School wrestler Hoak Corgatelli, right, placed fifth in the 106-pound class at the Idaho state wrestling tournament. He was the lone Blackheart wrestler to bring home a medal.

Challis High School wrestler Colton Battley faces off against his opponent at the state wrestling tournament.

Corgatelli finished fifth in the 106-pound division of 2A, going 4-2 on the weekend. Challis High School competes in Division 1 in most sports, but Division 1 and 2 schools are in a single bracket at the state meet.

Coach Bill Bradshaw said Corgatelli worked hard for his wins and he is proud to see the young wrestler succeed.

Corgatelli won his first match against Truman Renof of North Fremont, 2-1. He got pinned in his second match against eventual state champ, Connor Parkinson of Ririe. He defeated Tige Roberts of West Side 14-9 in his third match. Corgatelli pinned his opponent Fallon Wilkins of Clearwater Valley in his fourth match. Riley Lundy of New Plymouth pinned Corgatelli in Corgatelli’s fifth match.

In the match to determine fifth and sixth places, Corgatelli pinned Wyatt Flick of Wendell for the win.

220-pound Avery Robles and 138-pound Kasen Hohnstein tied for the next best records at state at 2-2. Bradshaw said they both tried their hardest to place, but fell short.

“They showed a lot of Blackheart guts,” their coach said.

Hohnstein was one place out of the medal round. He pinned his first opponent, Tyson Tucker of Potlach, before being pinned by second-place finisher Austin Nadler of Malad. In his third match, Hohnstein pinned Woody Pyle of McCall-Donnelly. Hohnstein was pinned in his fourth match by Tye Sherwood of Ririe.

Robles got pinned by Caleb Johnson of Orofino in his first match. Dawson Osterhaut of Declo, the eventual state champ, pinned Robles in his second match. Robles came back to pin Robbie Staffen of Valley before being pinned in his fourth match by Joe Orchard of Ririe.

182-pound George Cecil and and 113-pound Aeden Baker both had 1-2 records at state. Colton Battely, who wrestled in the 98-pound division, went 0-2.

Cecil lost 0-6 in his first match against Clayton Larsen of Orofino. Cecil pinned Bladen Farmer of Grangeville in his second match. Cecil was then pinned by Colter Bennett of Salmon.

Baker got pinned in his first match against Dylan Burtenshaw of West Jefferson. In his second match, Baker was down 0-4 before pinning Jaden Thompson of North Gem. Baker was pinned by Anthony Fabbi of Clearwater Valley in his third match.

Battley lost to Martin Estrada of North Fremont and to Jed Hurren of West Side.

Challis finished 18th in the combined 1A-2A division with 33 points, but Bradshaw said the Blackhearts were third among the 1A schools.

Bradshaw said he is already making plans for next season. He is proud of the improvements his wrestlers made this year. From beginning to end the Blackhearts strove to improve their skills, he said.

“We had a lot of first-timers this year,” Bradshaw said. “The goal was to get a little better every week. For some of them it was leaps and bounds.”

Bradshaw said the whole team is expected to return next year, alongside a fresh group of eighth-graders who will be in high school next year.