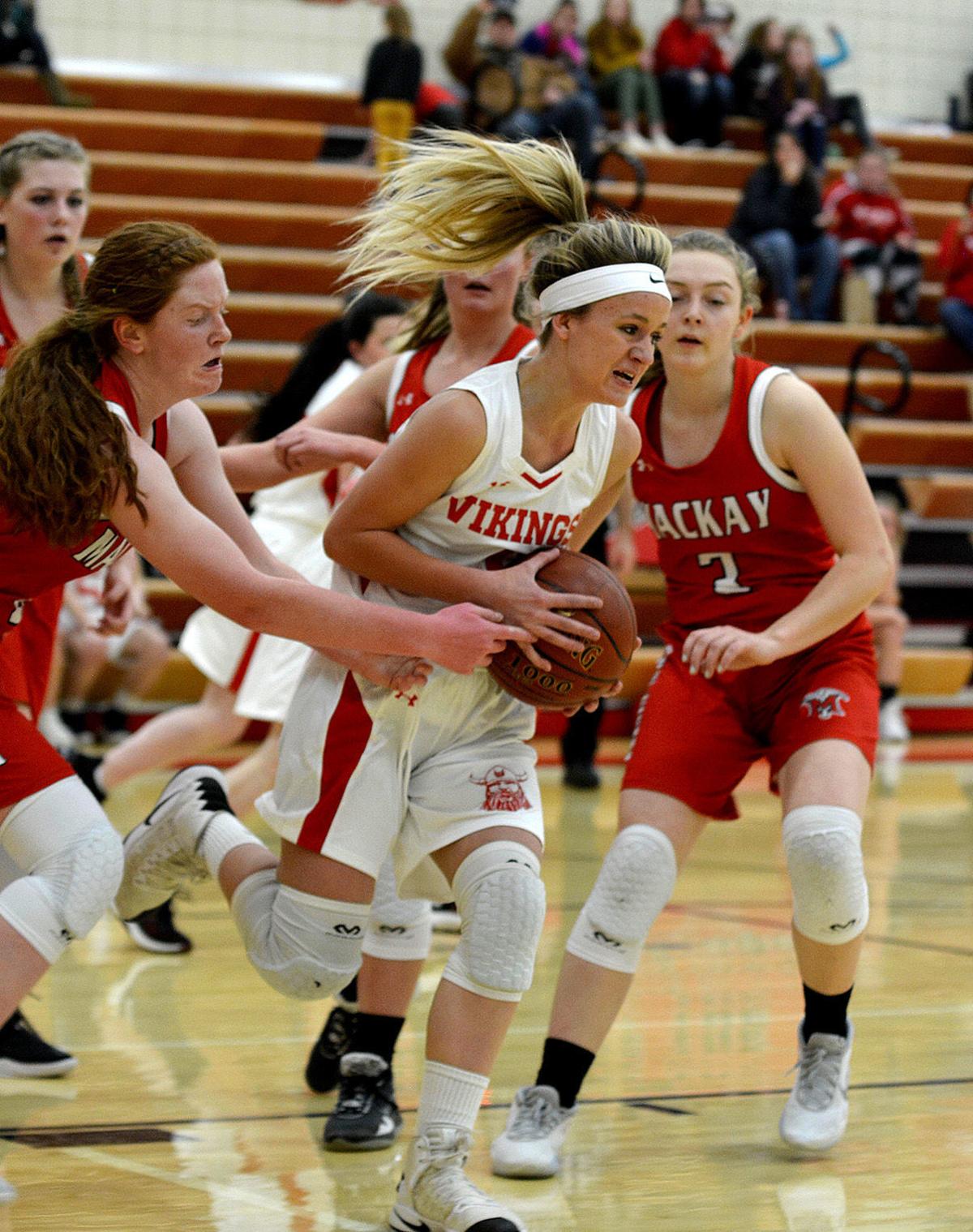 Challis player Austyn Erickson comes out ahead in a fierce battle for possession of the ball in the Mackay-Challis game last week. 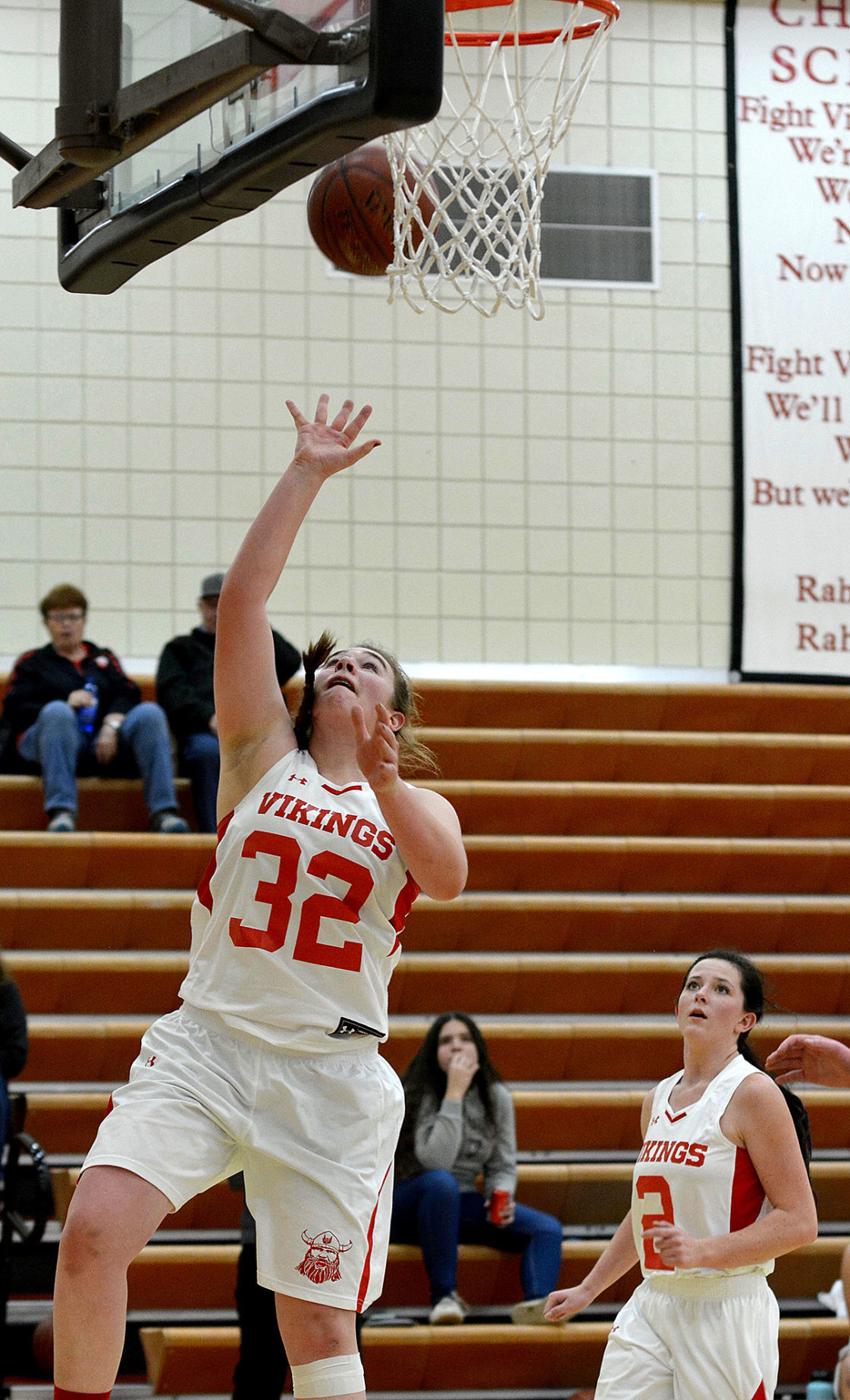 Lady Viking Tessa Gregory (32) ends a fast break with a basket in the Challis-Mackay game. Mackay went home the victors.

Challis player Austyn Erickson comes out ahead in a fierce battle for possession of the ball in the Mackay-Challis game last week.

Lady Viking Tessa Gregory (32) ends a fast break with a basket in the Challis-Mackay game. Mackay went home the victors.

The Lady Viking JV team had a close game against Mackay on Jan. 13 and ended up losing by a foul shot in the last four seconds of the game.

Mackay and Challis played close, with the lead switching throughout the two quarters of their game. The JV girls are playing only two quarters now because of a shortage of players.

At the end of the first quarter the Challis girls had a lead of 8-6. In the last quarter, the Mackay Miners caught up and stayed ahead of the Vikings until the last 8 seconds when Summer Taylor tied the score 18-18. When Mackay had possession of the ball the Vikings fouled, and Mackay got to shoot because they were in a double bonus situation. The Miners made a foul shot putting them ahead by 1 and giving Challis only a few seconds to get the lead back. The Challis girls had a fast break, shooting and missing before the buzzer and not being able to put up another shot, they lost.

The top scorer was Taylor with 6 points. Tayia Baldwin and Ali Rembelski each had 4 points. Carley Strand and Jordyn Ellis had 2 points each.

The Challis varsity game against Mackay was another loss for the Vikings.

The first quarter ended with the Miners ahead 10-7. The Lady Vikings went into halftime still behind, but now by 7 with a score of 27-20. The Challis team fell behind by 15 points in the third quarter when they only made 14 points and the Miners made 22. The last quarter of the game the Vikings didn’t let the Miners get ahead by a lot more when Mackay scored 19 points and not far behind the Vikings made 17, with a final score of 53 to 68.

Although Challis lost, Austyn Erickson and Olivia Farr had a great 3-point game. Farr made four 3-point shots and Erickson made three, racking up their team’s score. Farr was top scorer with 14 points. Making 10 or more points on the Viking’s team was Halle Oerke with 12, Erickson with 11 and Zoe D’Orazio with 10.

The lady Vikings travel to Butte County High School for a Thursday Jan. 23 game. JV action starts at 5:30 p.m., followed by the varsity game. Senior night is Friday, Jan. 24 with Challis facing North Fremont. The JV game begins at 5 p.m.. The varsity girls will start at 6 p.m. On Saturday Jan. 25 the boys and girls travel to West Jefferson. Tentatively, the JV girls start at 2 p.m., JV boys at 3:30 p.m., varsity girls at 5:15 p.m. and varsity boys at 7:30 p.m.

The Challis Lady Vikings’ game on Jan. 17 was canceled and will not be rescheduled. Taylor’s Crossing had to forfeit the conference game against the Vikings due to weather conditions in Idaho Falls.