News
COVID-19
Elections
Sports
Obituaries
Opinion
Features
Milestones
Calendar
Contests
Classifieds
Read the E-Edition
Make An Announcement
Subscriber Services
Site Services
Browse the Archives
Welcome to our new website. We have a new login system for you to access the full newspaper online. Please click here to learn how to activate your new account. Bear with us as we move into this new site and bring over all our old articles and photos.
Activate Now 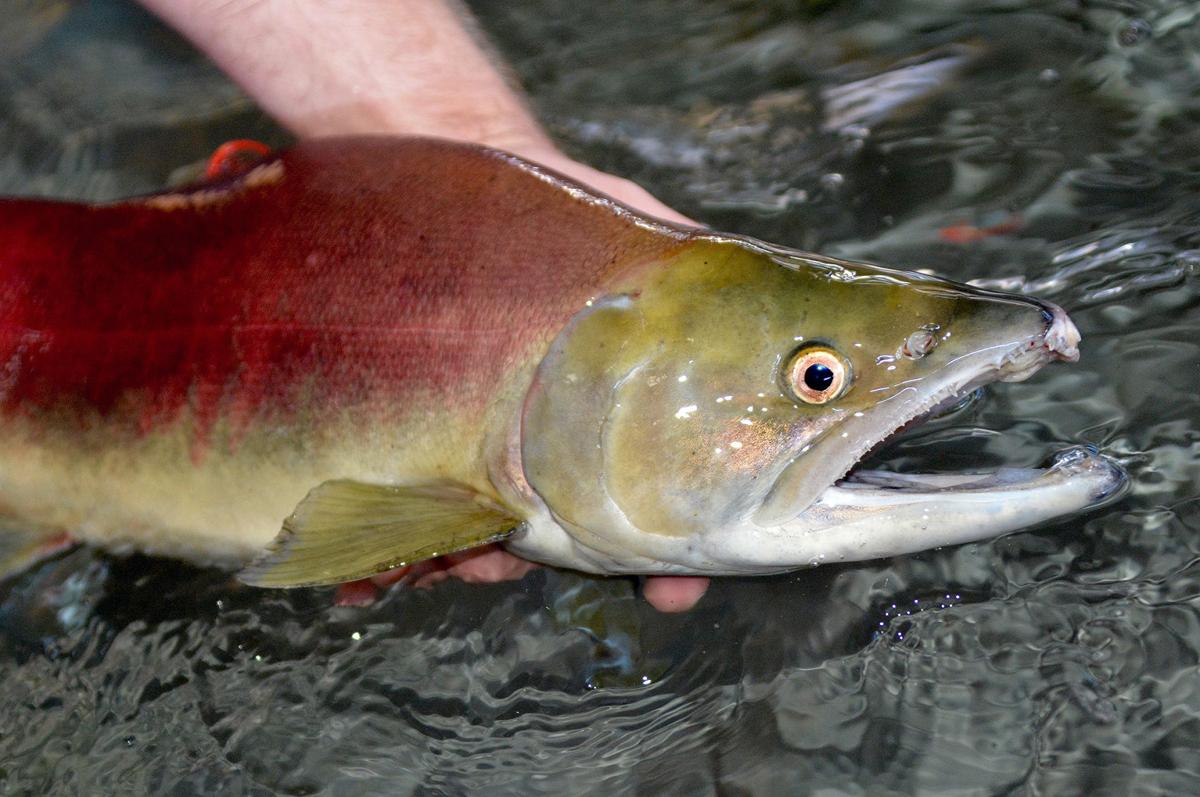 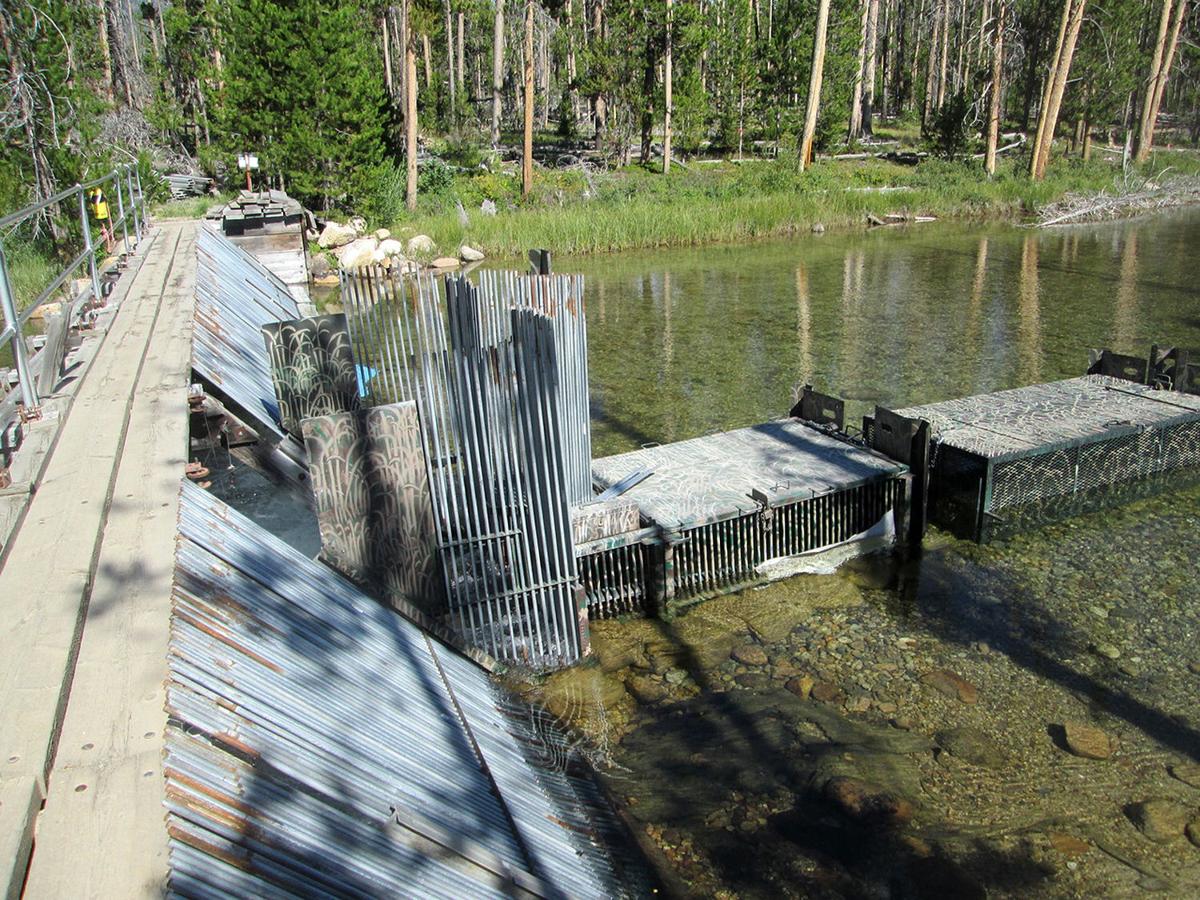 This fish weir on Redfish Lake Creek traps sockeye salmon. A similar weir is under construction for the nearby Pettit Lake Creek in Stanley Basin.

This fish weir on Redfish Lake Creek traps sockeye salmon. A similar weir is under construction for the nearby Pettit Lake Creek in Stanley Basin.

Calling it a “big deal” for the Shoshone-Bannock Tribes, ground was broken Aug. 12 for a fish weir on the outlet stream of Pettit Lake in Stanley Basin in the ongoing effort to restore sockeye salmon runs.

The new weir replaces an old, problematic fish trap, and will enable biologists to track out-migrating juvenile sockeye from the lake, and trap returning adult sockeye salmon so they can be processed. Construction is expected to be finished in mid-October.

“It’s taken me several years to get to this point through permitting, funding, lots of sweat and tears to get this thing built,” said Kurt Tardy, fisheries biologist with the Shoshone-Bannock Tribes. “This is definitely a big accomplishment for the tribes. It will be the first permanent fixture for the tribes that will really benefit our ability for data collection both on juveniles and adults for sockeye salmon.”

Despite poor conditions for migrating salmon in recent years, Pettit Lake saw its first sockeye return to the lake in decades.

“Prior to last year, there wasn’t a single return for over 30 years,” Tardy said. “Last year we returned the first three.”

Tardy said the returning fish were a surprise. Biologists have been releasing adult sockeye in the lake to spawn naturally since 2015, and last year’s three fish were the first to return. Fisheries biologists tag some of the outgoing juvenile fish with an internal microchip allowing them to be tracked through the Columbia River basin. As fish pass through dams, their passive integrated transponders, or PIT tags, identify where they originated from. This year, at least one PIT-tagged fish is headed back to Pettit Lake.

“Not every fish is PIT-tagged,” Tardy said. “This one is a highlighted case for Pettit. If you were to search it in the Columbia River Basin you could actually see that there is a Pettit fish returning.”

Because of the disruption to the stream caused by the construction, any migrating salmon returning to Pettit Lake this season will be picked up as they pass the Sawtooth Fish Hatchery downstream.

“Those fish will be put on a truck and transported to Pettit Lake,” Tardy said. “They won’t be able to free swim because of the construction of the weir. Those fish are going to get some special treatment.”

The Shoshone-Bannock Tribes’ role in the recovery of salmon took front stage in 1990 when the tribes petitioned the National Marine Fisheries Service to list the Snake River sockeye salmon as an endangered species and work to recover and protect their habitat in Stanley Basin. Sockeye were listed in 1991 and the tribes, the state and federal agencies began measures to restore the fish on the verge of extinction.

“The long-term goal is to see every lake in the Stanley basin producing native sockeye salmon by using the best available science to maximize natural production through nutrient enhancement and develop effective supplementation programs in conjunction with existing hatchery programs,” said Randy’L Teton, public affairs manager for the Shoshone-Bannock Tribes. “The Shoshone-Bannock Tribes are proud of the work that has been done over the past three decades by dedicated staff and are excited to see the new facility installed for the next generation of tribal fish and wildlife biologists.”

Idaho Fish and Game has focused its sockeye restoration efforts on Redfish Lake, leaving the Shoshone-Bannock tribes to concentrate on Pettit and Alturas lakes.

The new Pettit Lake weir is part of the effort that also includes captive broodstock and conservation hatchery programs, and research projects.

“The (adult) Pettit fish are released to spawn naturally in Pettit Lake,” Tardy said. “Most of the hatchery production is completed through Springfield (Hatchery) in eastern Idaho for Redfish Lake. Pettit Lake is all done through natural spawning.”

The fish now beginning to trickle back to Pettit Lake are related to Lonesome Larry, the only sockeye to return to Redfish Lake in 1992. The solitary fish made the 900-mile trip up the Columbia, Snake and Salmon rivers past eight dams. Historically, Redfish Lake had upwards of 13,000 sockeye and Pettit Lake 8,000 to 8,500 salmon, according to Idaho State University studies.

“We actually release remnant genetic fish from Lonesome Larry,” Tardy said of the Pettit Lake sockeye. “They are released 50 pairs a year. We started that in 2015. Those adults will spawn naturally on the lake shoals and put eggs in the gravel. It’s all natural without the hatchery. This lake seems to take better to adults actually spawning in it.”

Tardy said nearby Alturas Lake is still a work in progress. At first, biologists tried allowing fish to spawn on lake shoals similar to Pettit Lake, but they have since learned that sockeye are doing better spawning in the Alturas Lake streams.

The effort to restore sockeye is measured in “brood years” which is generally five years. It takes a sockeye five to six years to go from a migrating juvenile fish in Idaho to the ocean and back to spawning in a central Idaho lake or stream.

“I think the future is very bright,” Tardy said. “We’re seeing Pettit fish return in bad condition years. It gives us a hope that as the ocean continues to change and water temps enclose and snowpack increases that we should start to see even Pettit returns. Likewise, we should see more Redfish returns as well.”

Funding for the Pettit Lake weir comes from the Bonneville Power Administration.