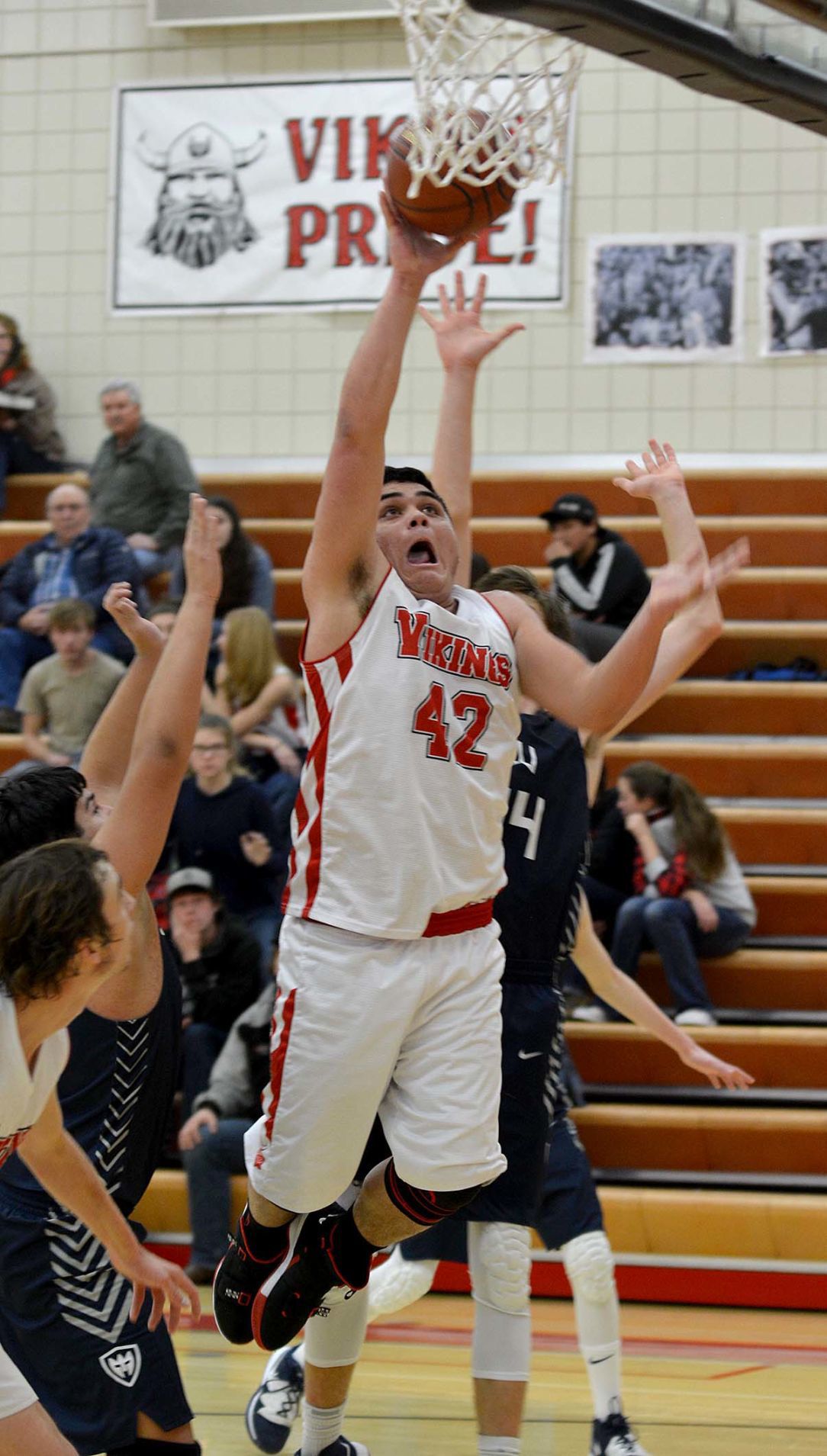 Challis Viking Isaac Schwenke (42) scored one of his inside buckets in the Jan. 4 contest against Watersprings. 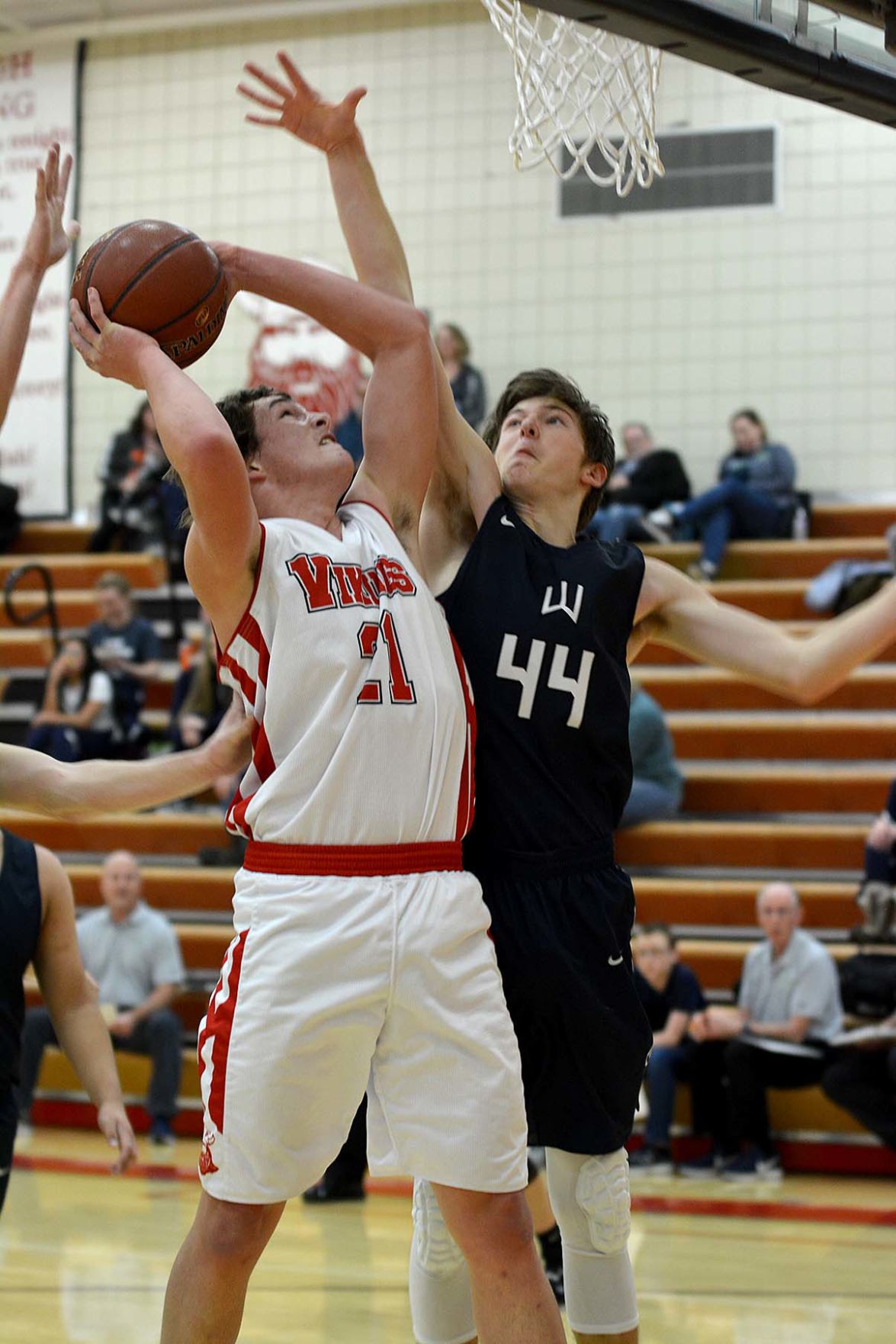 Viking RJ Philps (21) presses in against a Watersprings defender to get the points. Challis fell in a stunner to Watersprings on Jan. 4.

Challis Viking Isaac Schwenke (42) scored one of his inside buckets in the Jan. 4 contest against Watersprings.

Viking RJ Philps (21) presses in against a Watersprings defender to get the points. Challis fell in a stunner to Watersprings on Jan. 4.

The Vikings had beat the Warriors at Watersprings on Dec. 20, but fell to them on their home court last week, 50-48.

Senior Austin Ollar injured his ACL in the last quarter of that Dec. 20 game and is out for the remainder of the season.

The warriors had no reinforcements on their bench as they brought only five players — two freshmen, two sophomores and a junior.

The Vikings had a strong start although they didn’t get the jump. Strand started off hot, sinking three, 3-point shots for nine points in the first quarter. Philps scored four points with two 2-pointers, Ammar and Schwenke each scored two. With great teamwork they were able to pull ahead with a good lead, ending the quarter with a score of 17-13, Vikings up.

In the second quarter Schwenke tacked up another two points with a lay-in, Ammar added two more by sinking two foul shots, and Philps made two lay-ins and two foul shots for a total of 10 points. Philps shot 100 percent from the foul line. Watersprings only put up nine more points in the quarter with three 2-point shots and three foul shots. This left the score at 27-22 in Challis’s favor at halftime.

After being refreshed during halftime the five Watersprings players came out swinging and pulled up the slack between the two teams. Canfield hit three 3-point shots and Smith made two lay-ins for a total of 13 points. The Vikings came up short in the third quarter with only seven points, two points for Arrizubieta, two for Parkinson, two for Philps, and one free throw for Ammar. This weak quarter cost Challis the lead, leaving the score at 35-34, Watersprings up.

The score was tight throughout the final quarter with no more than a two-point difference between the teams and the lead alternated. Philps, who played a crucial part in the Vikings’ scoring, fouled out in the final quarter. In the final seconds of the period the score was 49-48 with Challis down. With the ball in the possession of the Vikings they had a chance at a lay-in that bounced off the back of the rim and into the Warrior’s hands. In the last four seconds of the game there was a foul called on the Vikings that brought the Warriors to the foul line where they scored one point. That left the Vikings only four seconds to score three points to win the game. The Vikings were unable to prevail in in these few seconds, leaving Watersprings with the win, 50-48.

The high scorer for the Vikings was Philps with 12 points, followed by Ammar with 11, Schwenke with 10 and Strand with 9. High scorers for the Warriors were D. Canfield and R. Canfield, both with 15 points.