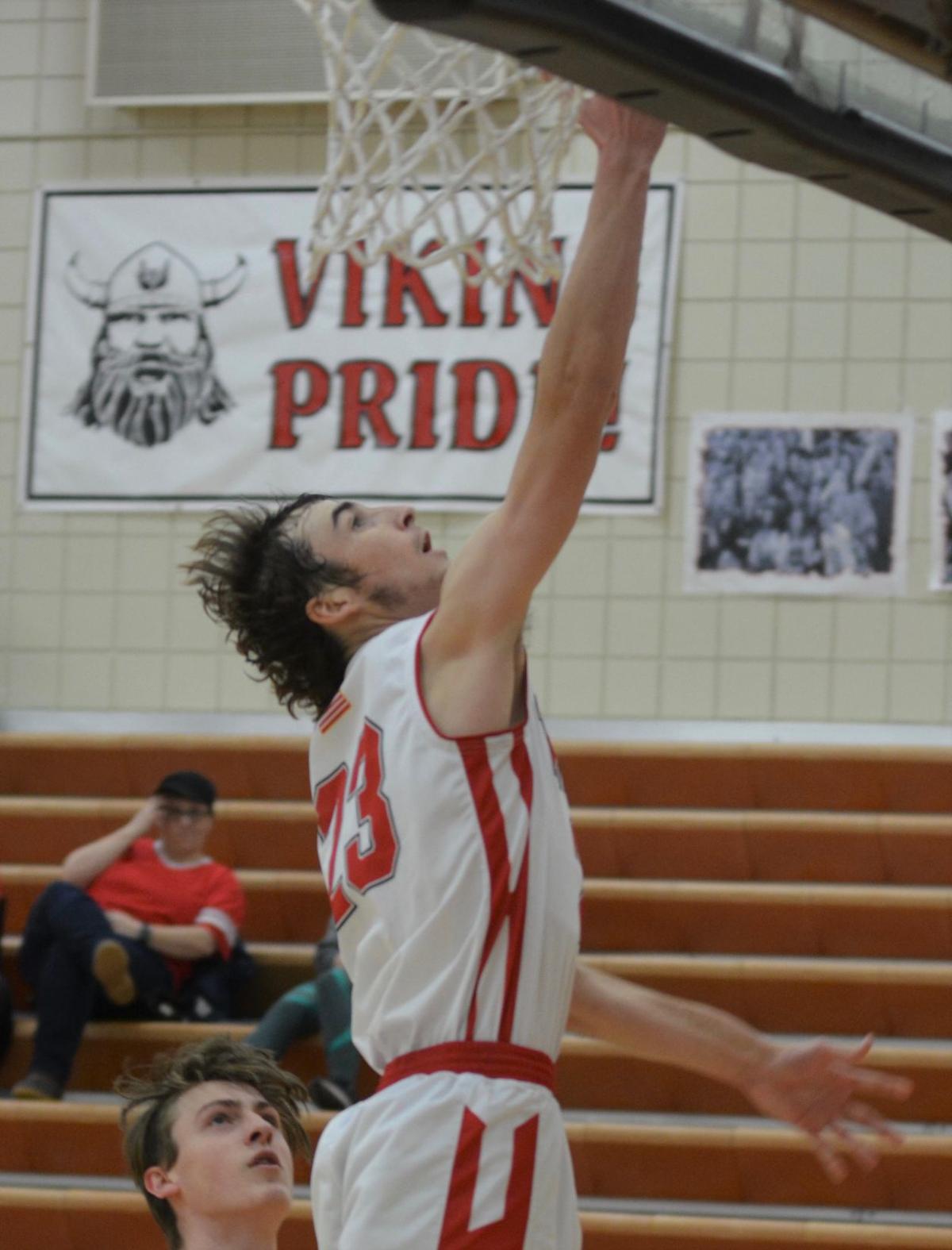 Challis senior Carson Ammar goes up for the score on a fast break against Taylor’s Crossing.

Challis senior Carson Ammar goes up for the score on a fast break against Taylor’s Crossing.

Against Salmon on the Savages’ home court, the game started out rough for the Vikings. Salmon scored 15 points in the first quarter while the Vikings only got 8. The second quarter went better for Challis as they scored 17 points, two more than Salmon’s 15. After halftime Challis scored another 14 points compared to Salmon, with another 15-point quarter. In the final quarter Salmon put up another 15 and Challis came up short with 12 points, leaving the final score at 60-51 in Salmon’s favor.

On Jan. 9 West Jefferson came to Challis ready to play.

The first quarter was a weak start for the Vikings. They only came out with 3 points from Schwenke. The Panthers scored 10 points giving them a 7-point lead at the end of the first quarter. Challis came up short again in the second quarter with 9 points while the Panthers added another 15, leaving the score 25-12 at halftime. After halftime the Vikings had another devastating quarter. They made 10 points but allowed the Panthers to score 24, leaving the third quarter at 49-22. West Jefferson tacked another 10 points on in the fourth quarter while the Vikings had another weak quarter scoring 6 points. The game ended 59-28.

Ammar led the Vikings with 12 points, Schwenke had 11, Siggers scored a 3-pointer and Chris Arrizubieta had 2 points. Strand led the team in steals.

Challis headed to Idaho Falls on Jan. 11 to play Taylor’s Crossing in a close game. Neither team allowed the other to score much. The Eagles only allowed Challis 6 points in the first quarter and the Vikings only allowed Taylor’s Crossing 7 points. Both teams gained 5 more points in the second quarter putting the score at 12-11 with the Eagles up. After halftime the Vikings came out and made 12 points for their strongest quarter and the Eagles gained 5 points for their weakest quarter. In the last quarter the Vikings scored 10 points and the Eagles made 11, leaving the final score 33-28.

Ammar scored 10 of the 33 points and led the Vikings in rebounds. Philps scored 8 points, Parkinson scored 5, Strand and Schwenke each had 4 and Siggers had 2.

Challis played another great game against Taylor’s Crossing on Jan. 17. The Vikings came out strong in the first quarter scoring 14 points and only allowing 11 for the Eagles. Challis scored another 18 in the second quarter and Taylor’s Crossing came out short again with 9. The score was 32-20 at the half. After halftime Challis came out weak with 6 points and the Eagles were able to score another 9. This put the third quarter score at 38-29 with the Vikings still ahead. Challis had a good fourth quarter with another 15 points while the Eagles made 8 for their weakest quarter. Challis took another win against Taylor’s Crossing with a final score of 53-37.

Ammar was the high scorer for the Vikings with 17 points, followed by Strand and Schwenke each with 9 points, Arrizubieta with 7 points, Siggers with 5 points and sophomores Jarett Ollar and Parkinson with 3 points each. Schwenke led the team in rebounds.