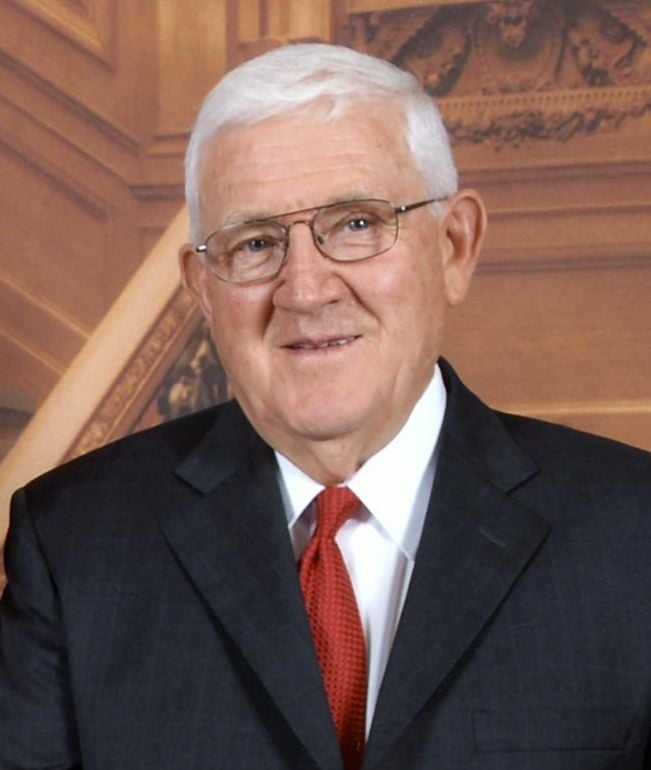 James D. Hansen, beloved husband, father, grandfather, and great grandfather, was born July 15, 1938, in Paradise, Utah. He passed away November 30, 2019, in Chamberlain, South Dakota. Jim was raised on a small family farm in Cache Valley, Utah, where he spent his days working with his dad, developing his dislike for milk cows and thinning beets, and his love for hunting, especially duck hunting. Anyone who spent time with Jim was fortunate enough to hear his many stories of hunting ducks in the river bottoms and marshes. After graduating from South Cache High School, he enlisted in the United States Army. During his service, he was a member of the Competitive Marksman Team. While stationed in Missouri, he was able to first attend a New York Yankees game, which grew into a lifelong family-wide love affair with the team. Jim served a mission for The Church of Jesus Christ of Latter-day Saints in the Northern California Mission, with a great deal of his time assigned to serve in Medford, Oregon. Following his mission, he was recalled into the Army. While he was home on leave in the winter of 1961, Glen Roundy, a former mission companion, introduced him to Coralie Rigby. After their first double date, he asked her to please write to him. She did, a long-distance courtship began, and they were married in the Logan, Utah Temple on December 14, 1962. After completion of his military service, he enrolled at Utah State University, graduating in 1965. Just after graduation, he and Coralie welcomed their oldest son, Cary James Hansen. Jim accepted a position as a Territory Sales Representative with Phillips Petroleum, covering Utah, Nevada, and Idaho. In August of 1967, they had their only daughter, Lauralie. In 1971, things continued to change for their small family as their youngest son, Kirkland Rigby Hansen was born, and Jim was transferred to Idaho Falls. In 1974, he purchased Conrad & Bischoff, Inc., a decision that would shape his family's future for generations to come. For over thirty years, Jim worked to build Conrad & Bischoff into a successful and thriving business. From very humble beginnings, he, along with Jim and Kirk, expanded their businesses to include not only wholesale and retail petroleum sales, but also commercial real estate, and later, Kyani, Inc., a global health and wellness company. He always focused on the little details, and there were always plenty of "ten-minute jobs" that needed to be done. Despite what most would view as remarkable success, Jim never forgot his humble beginnings. He was an extremely generous person, who many times quietly and anonymously helped those in need. Jim was a faithful member of The Church of Jesus Christ of Latter-day Saints, and throughout his life, served in numerous leadership positions in his local ward and stake, as well as at Brigham Young University-Idaho. He was also an officiator in the Idaho Falls Temple. Jim and Coralie served missions in San Francisco, California, and Edinburgh, Scotland. Jim's favorite thing in the world was his family. Whether at the cabin, hunting, fishing, traveling, going on long rides together, or attending a Yankee or Jazz game, he loved spending time with his wife, children, grandchildren, and great grandchildren. He was proud of each of them and viewed them as his greatest treasure. He is survived by his wife, Coralie Rigby Hansen; his daughter, Lauralie (Scott) Seedall; daughters-in-law, LeAnn (Jim) Hansen and Rebecca (Kirkland) Hansen; as well as 11 grandchildren and 9 great grandchildren. Funeral services will be held at 11 a.m. Wednesday, December 18, 2019, at the Ammon 8th Ward, located at 2055 S. Ammon Road, in Ammon, Idaho. The family will visit with friends Tuesday from 6-8 p.m. at Wood Funeral Home East Side, 963 S. Ammon Road, and Wednesday from 10-10:45 a.m. prior to services at the church. Burial will be in the Ammon Cemetery. Condolences may be sent to the family online at www.woodfuneralhome.com. James 7/15/1938 - 11/30/2019D. Hansen