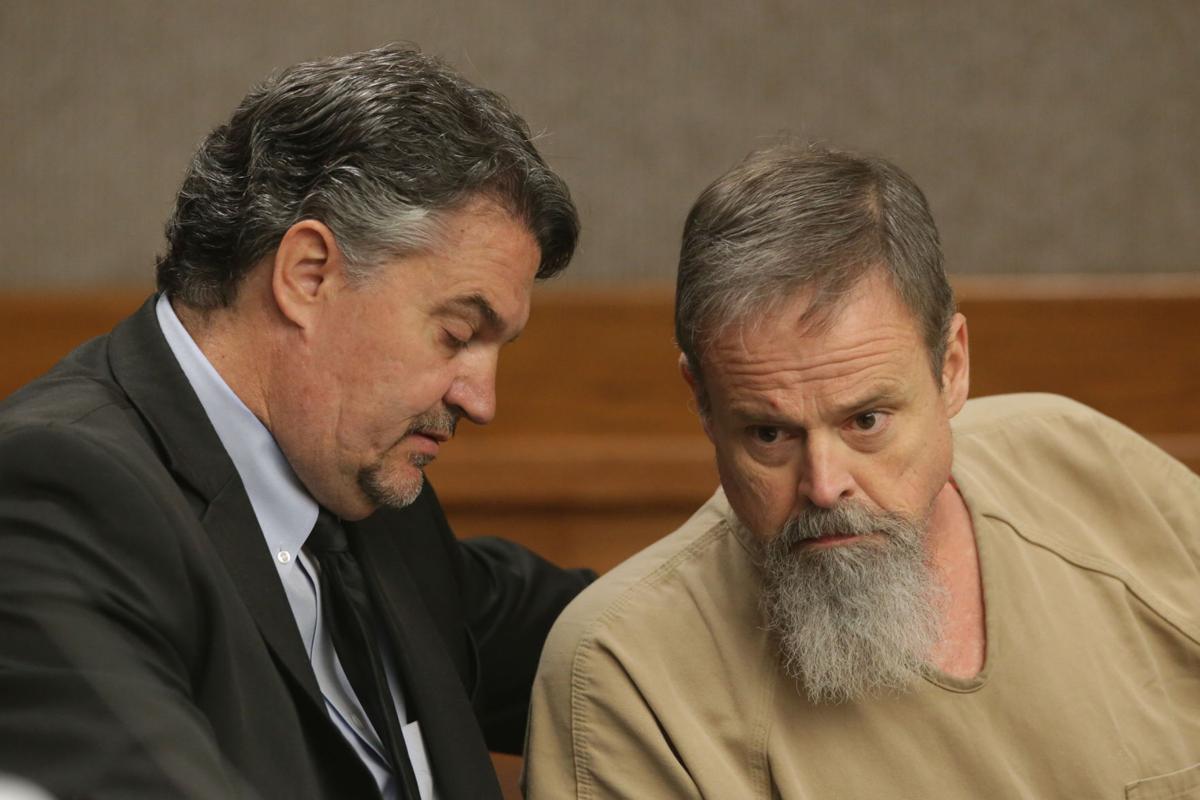 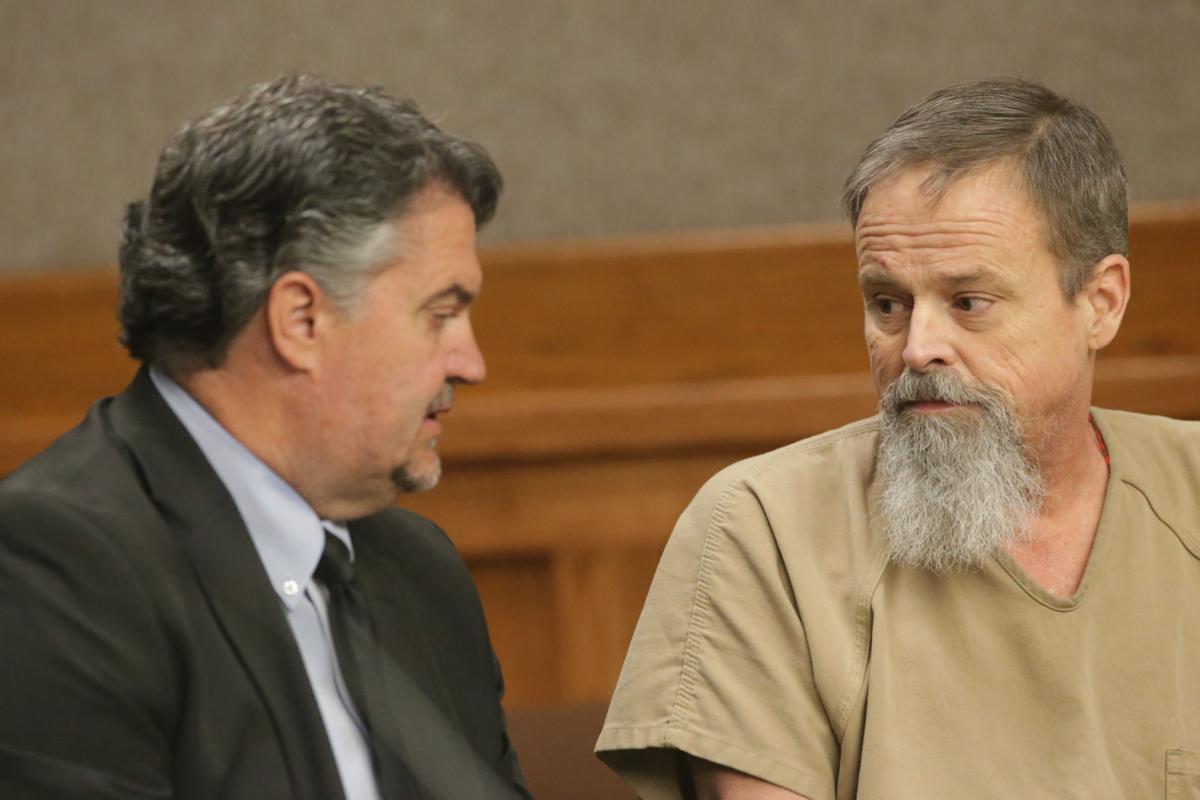 Defense attorney James Archibald and Brian Dripps confer during the preliminary hearing of Brian Dripps for the murder of Angie Dodge at the Bonneville County Courthouse on Friday, Aug. 23, 2019.

Defense attorney James Archibald and Brian Dripps confer during the preliminary hearing of Brian Dripps for the murder of Angie Dodge at the Bonneville County Courthouse on Friday, Aug. 23, 2019.

Defense attorneys for Brian Dripps filed a motion Thursday for his release from jail citing health concerns that could place him at greater risk from the coronavirus.

The motion comes less than a week after the Bonneville County Sheriff's Office announced it had discovered the coronavirus had infected nearly an entire housing unit of inmates, with 34 of 35 testing positive for the virus.

Dripps' attorneys also are filing a motion to delay a hearing on their motion to suppress his confession so they may gather more expert opinions. Court records provided new information on the hearing, including that the Idaho Attorney General's Office has conceded that part of Dripps' confession obtained by police should be suppressed.

Dripps is charged with first-degree murder and rape for the 1996 killing of Angie Dodge. He was arrested in May 2019 after an Idaho Falls Police Department investigation found his DNA matched samples recovered from the scene of the crime. Dripps admitted to killing Dodge when interrogated by police. His confession came after another man, Christopher Tapp, served nearly 20 years in prison after he was falsely convicted for the murder.

Dripps was denied bail during his arraignment. The judge cited the seriousness of the charges against Dripps in his decision.

In their motion for his release, defense attorneys James Archibald and Elisa Massoth argue that Dripps has several underlying health conditions that make him especially vulnerable to the coronavirus. The conditions include a type of autoimmune arthritis, Type 2 diabetes, congestive heart failure, coronary artery disease, hypertension, cardiomyopathy, obesity, paresthesia of both lower extremities, and gastroesophageal reflux disease.

"All of Mr. Dripps' health conditions place him at an extremely high risk of complications if he contracts COVID-19," a memorandum in support of the motion stated.

The motion includes affidavits from medical professionals discussing the risk posed to Dripps by the virus.

An affidavit from Dr. Mark Stern, an affiliate assistant professor at University of Washington who previously served as assistant secretary for health care for the Washington State Department of Corrections, discussed the general risk posed by the virus, but did not address Dripps' circumstances.

"As a correctional public health expert, I recommend urgent consideration of release of eligible individuals, with priority given to those 50 and over and those with underlying medical conditions most vulnerable to serious illness or death if infected with COVID-19," Stern wrote. Dripps is 54 years old.

An affidavit from University of Michigan School of Medicine Professor Jonathan Golob states COVID-19 can cause permanent damage to a patient's lungs and affect the heart's ability to pump blood.

Dr. Steven Edelman, a professor of medicine at University of California San Diego, wrote that individuals with diabetes have a higher chance of dying from the coronavirus than the general public.

One of the affidavits filed by Archibald and Massoth was sealed because it included Dripps' personal medical records. However, the memorandum in support of the motion of release cites Nurse Practitioner Michelle Hicks of St. Luke's Clinic in Meridian, who treated Dripps for seven-and-a-half years. The memorandum said Hicks believed Dripps would be at risk of death if he contracted COVID-19.

The defense attorneys are arguing that Dripps should be placed under house arrest until his jury trial scheduled for June 8, 2021, and that he should be allowed to stay with his mother in Caldwell where he lived before the arrest.

The attorneys also argued that Dripps would not pose a threat to the public, citing his lack of criminal history outside of the murder and rape charges filed in 2019.

"He is in no physical condition to harm anyone if released from custody," the memorandum states. "He uses the assistance of a walker to move around and is incapable of sitting or standing for prolonged periods of time because of his physical condition."

Dripps' attorneys argue it would be unconstitutional to keep Dripps in jail and quarantine him from other inmates, arguing it would violate his right to due process. The attorneys also claimed the Bonneville County Jail is not equipped to stop the virus from spreading to Dripps, citing the recent outbreak.

The Idaho Attorney General's Office, which took over prosecution of the case after the Bonneville County Prosecutor's Office recused itself, has not yet filed a response to the motion for release. Archibald told the Post Register he expects the prosecution to respond early next week.

Public Information Officer Scott Graf of the Idaho Attorney General's Office said the office does not comment on pending prosecutions.

In addition to the motion for release, Dripps' attorneys are also asking that a motion to suppress hearing scheduled for Sept. 30 be delayed.

The court records for the motion to release Dripps included new information that the prosecutors have agreed with the defense that part of Dripps' confession to Idaho Falls Police officers should be suppressed.

Archibald told the Post Register that Dripps mentioned a lawyer three times when interviewed by officers, but he continued to be questioned.

During a preliminary hearing in August 2019, Bonneville County Chief Deputy Prosecutor John Dewey said police stopped questioning Dripps when he said he needed an attorney, but continued questioning him when he began speaking of his own accord.

Dripps' attorneys said in the motion to delay the hearing that the COVID-19 pandemic has hindered their ability to interview experts they intend to cite at the hearing, and that they need more time to prepare their case.

Archibald said that while the prosecution has conceded parts of Dripps' confession should be suppressed, he and Massoth would still argue the entire confession should be thrown out. Archibald argued police should have stopped questioning Dripps after the first time he mentioned needing an attorney. He has also argued the officers did not properly read Dripps his Miranda rights saying that they handed him a Miranda waiver and told him it was "just protocol."

Both motions will be addressed at a status conference scheduled for 9 a.m. Wednesday in the Bonneville County Courthouse.