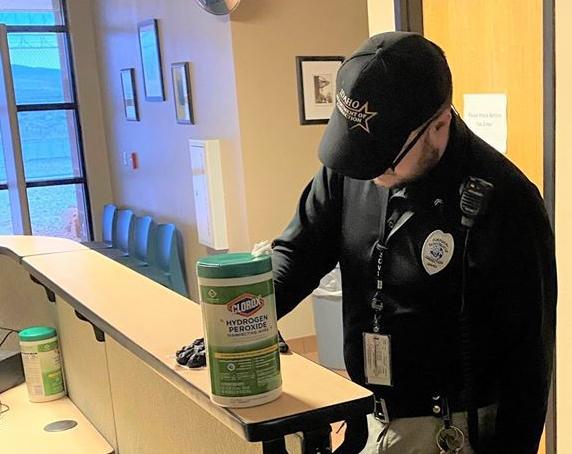 A department employee cleans a surface at the South Idaho Correctional Institution in Kuna. 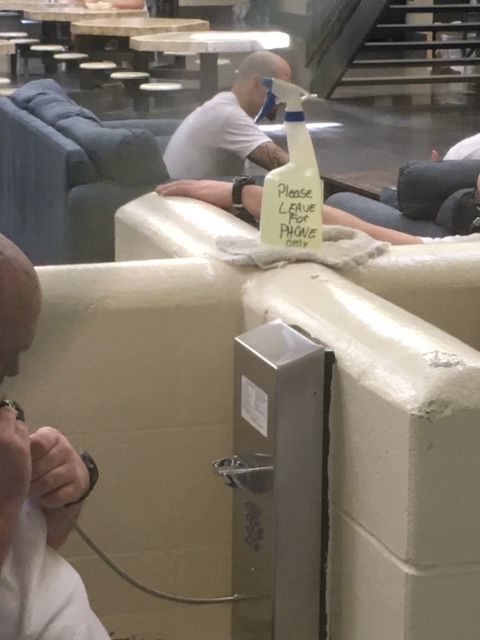 A bottle of disinfectant sits near a phone bank at the Idaho State Correctional Center.

A department employee cleans a surface at the South Idaho Correctional Institution in Kuna.

A bottle of disinfectant sits near a phone bank at the Idaho State Correctional Center.

In the wake of confirmed cases of COVID-19 in Idaho, the Idaho Department of Correction has suspended visitation in all its facilities and reentry centers across the state.

“Rehabilitation programs and limited recreation will continue in housing units,” according to the post. “This precautionary measure is to assure the orderly operation of the prisons and will be reviewed on Monday, March 16, 2020.”

Residents of the department’s re-entry centers will still be allowed to work in the community, according to the post.

According to the post, visitation has also been suspended at Eagle Pass Correctional Facility in Eagle Pass, Texas, where 610 Idaho men are imprisoned.

“On Friday, Texas Gov. Greg Abbott ordered all jails, prisons and juvenile justice facilities in his state to suspend visiting,” the post reads.

Additionally, the department has suspended co-payment for people in its custody charged for health care services “to encourage the reporting of symptoms and treatment of COVID-19.”

Department officials also have plans to screen people for COVID-19 as they enter the prison system, according to the post.

According to a Saturday post from the department, extra cleaning supplies have been deployed throughout the facilities as well. At the Idaho State Correctional Center, for instance, staff members have placed bottles of disinfectant in high-risk areas, such as near phones. Nor are the prisons short on toilet paper, according to the post.

Each facility already has an infection control committee, according to the department's standard operating procedure. The committee's job is to track and analyze epidemiological trends and discuss ways to decrease instances of infectious diseases.

The Idaho Commission of Pardons and Parole is also taking measures to prevent the spread of the coronavirus, according to another post on the department’s page. Inmates normally attend parole hearings through Skype, but the commission is discouraging people from attending hearings in person as well.

“Members of the public, including victims and inmate family and supporters, are strongly discouraged from attending hearings in person at (South Idaho Correctional Institution) to protect the health of the public, staff and inmates,” according to a post on the Idaho Department of Correction’s website.

Instead, the commission — which conducts hearings at the South Idaho Correctional Institution — has set up a conference line for victims, family members and attorneys to use in order to participate in hearings.

The commission also will post updates on its hearing schedule every day at 8:30 a.m., according to the post.

Idaho had five confirmed cases of COVID-19 as of Monday, according to a state website set up to provide information about the illness. Within the state, 270 people have been tested, and 31 are currently being monitored.

"IDOC, in conjunction with the Idaho Office of Emergency Management and the Idaho Department of Health and Welfare, will continue to closely monitor reports of COVID-19 and announce operational changes here," according to the department's Facebook page.