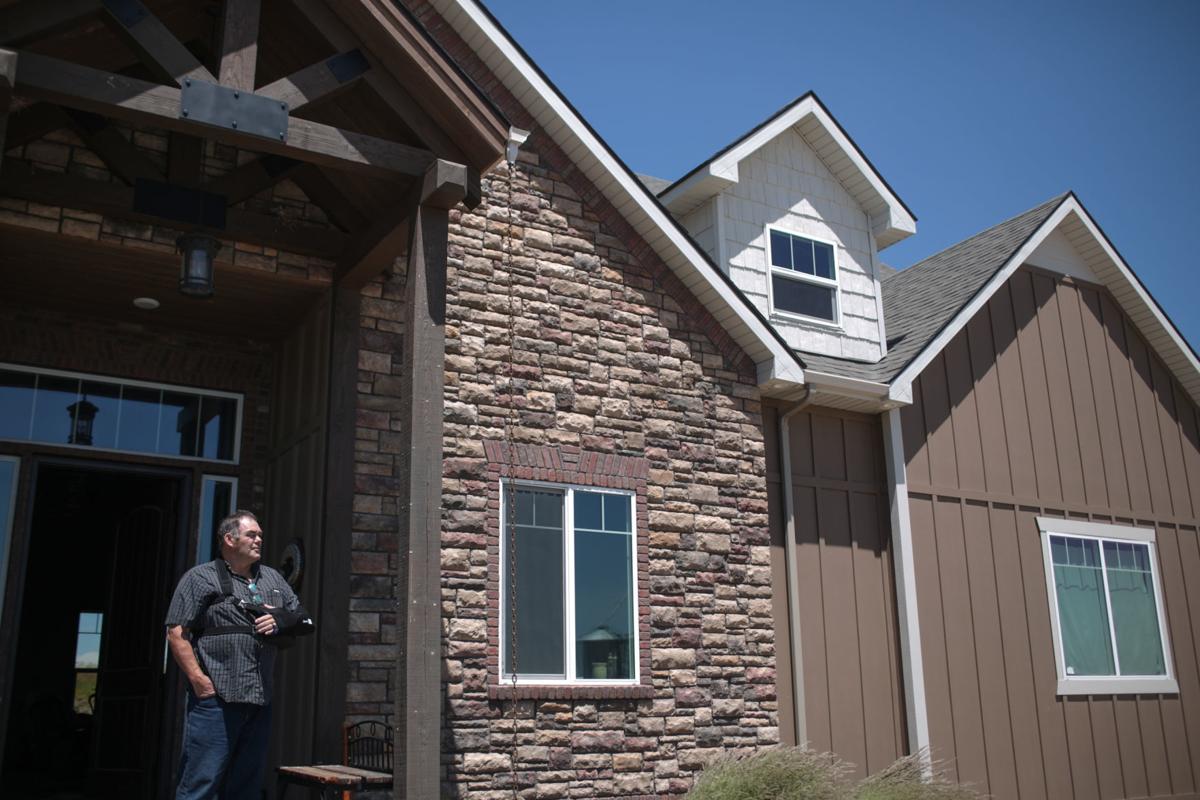 Vern Piquet poses for a photo outside of his home on Tuesday, July 7, 2020. Piquet planned to retire but has been spent more than $400,000 to fix his home. 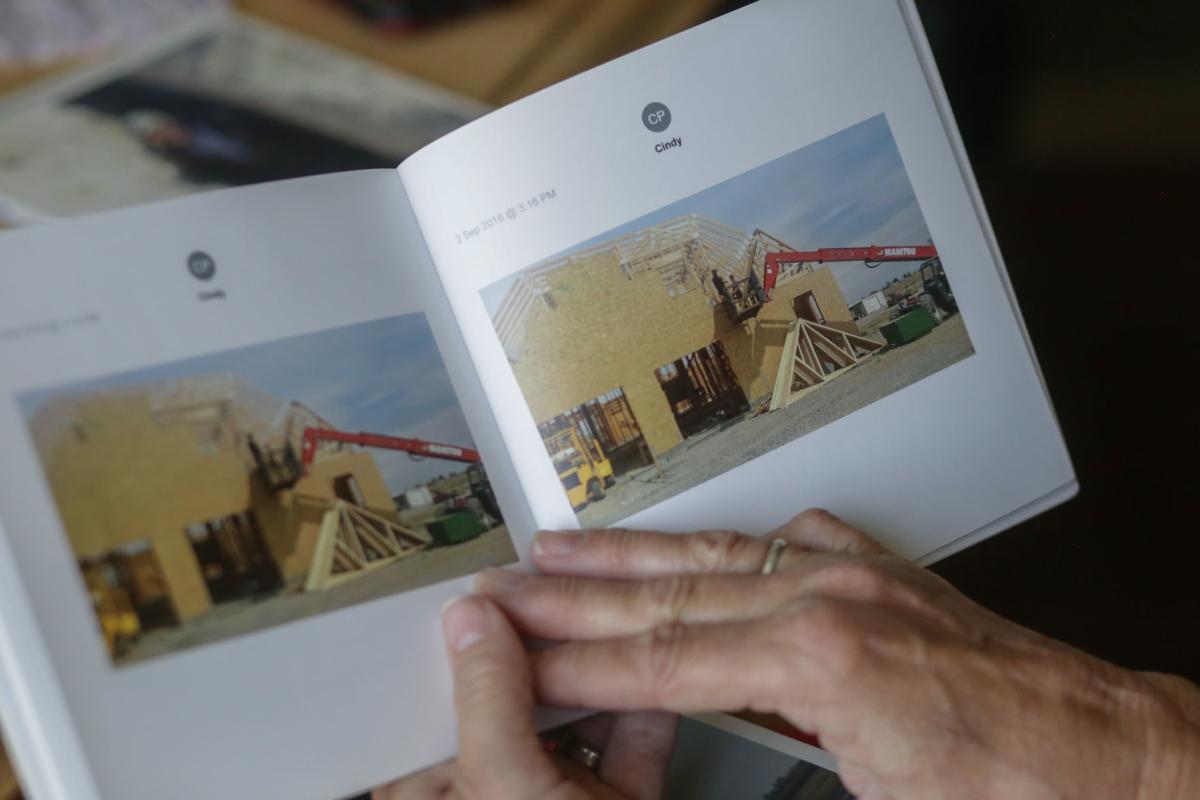 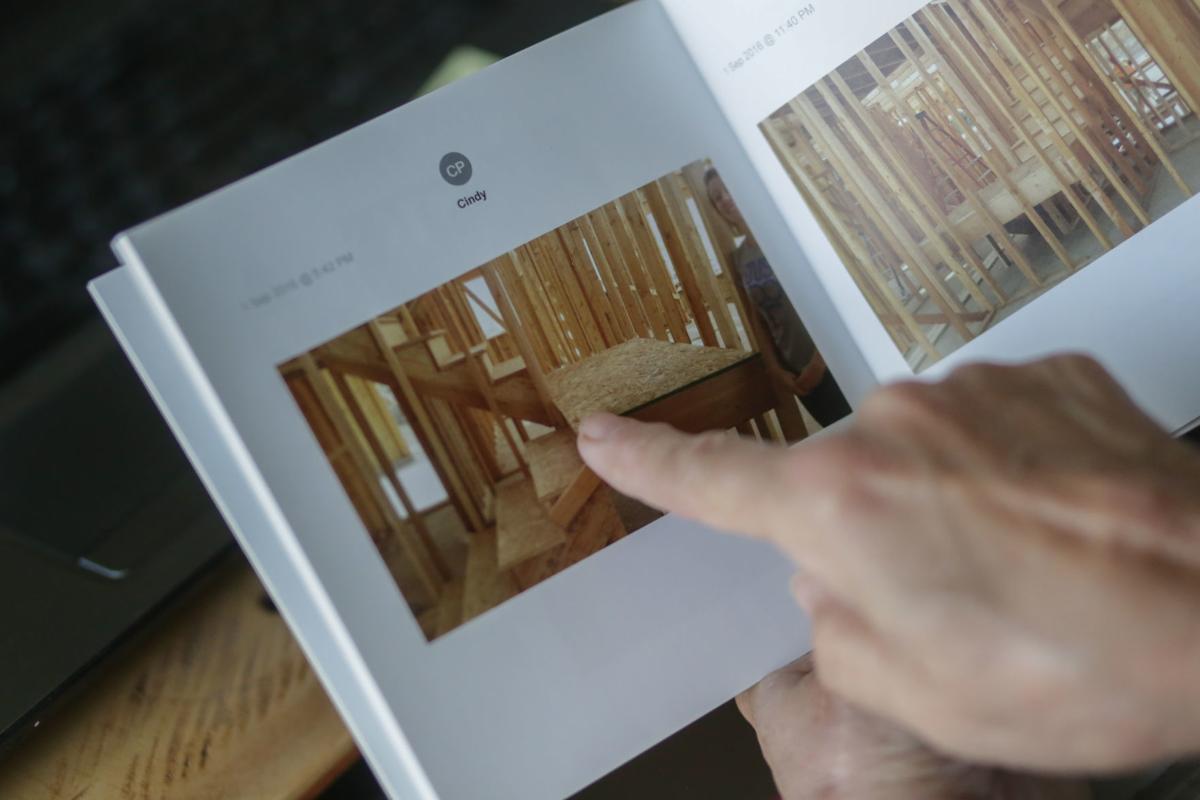 Cindy Piquet shows a photo of the stairwell that was built incorrectly on Tuesday, July 7, 2020. 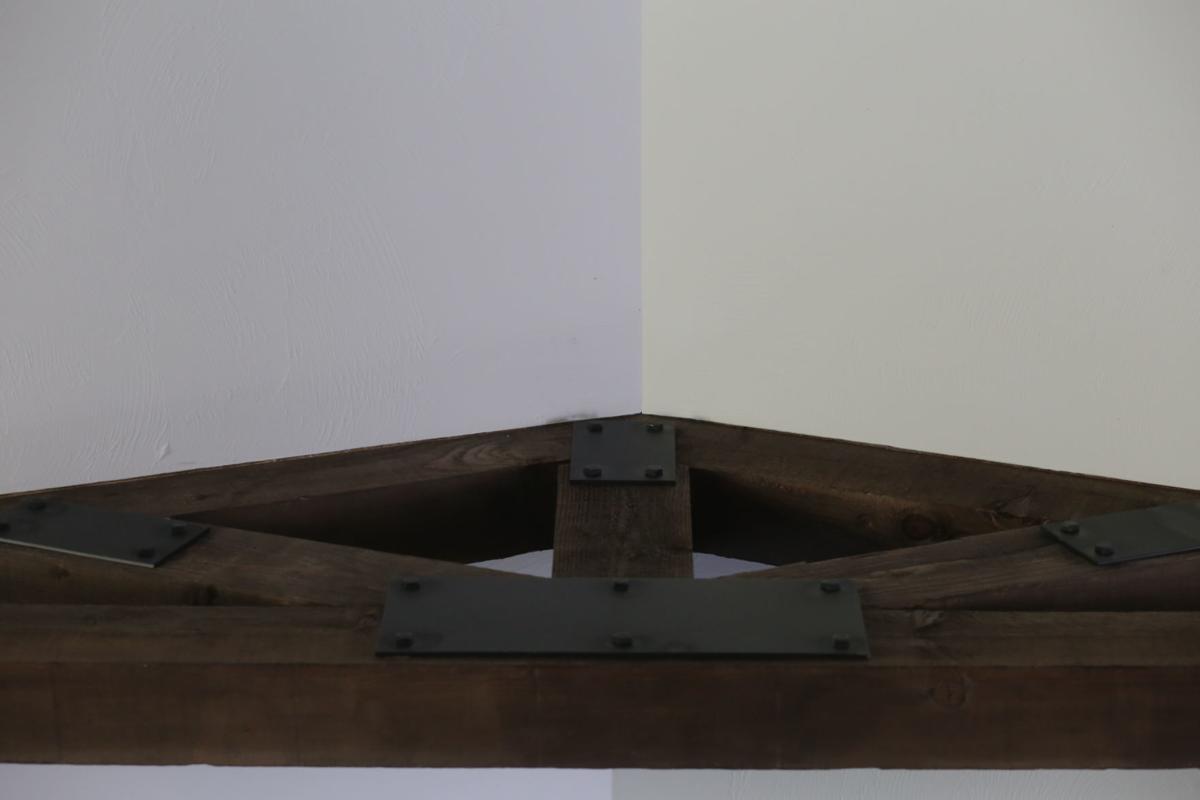 Roof beams are seen misaligned with the apex of the ceiling at the Piquet home on Tuesday, July 7, 2020. 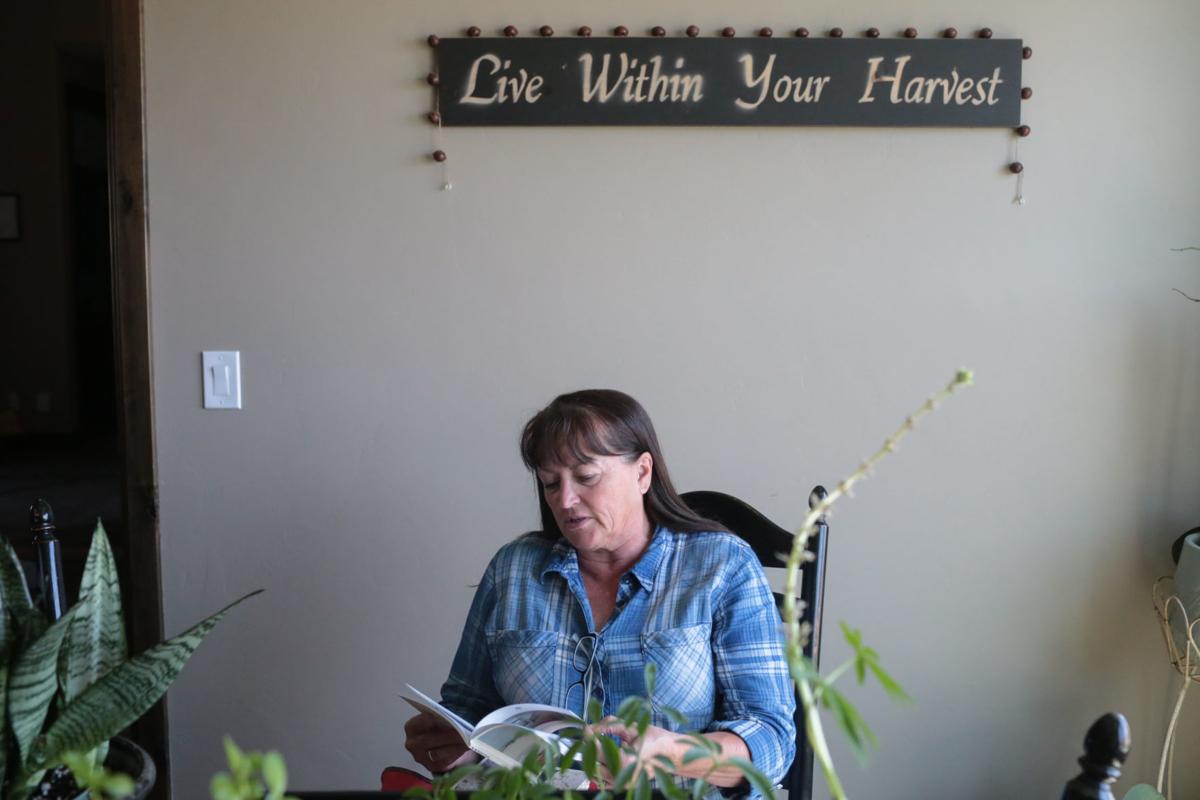 Cindy Piquet goes through photos of her home under construction on Tuesday, July 7, 2020. 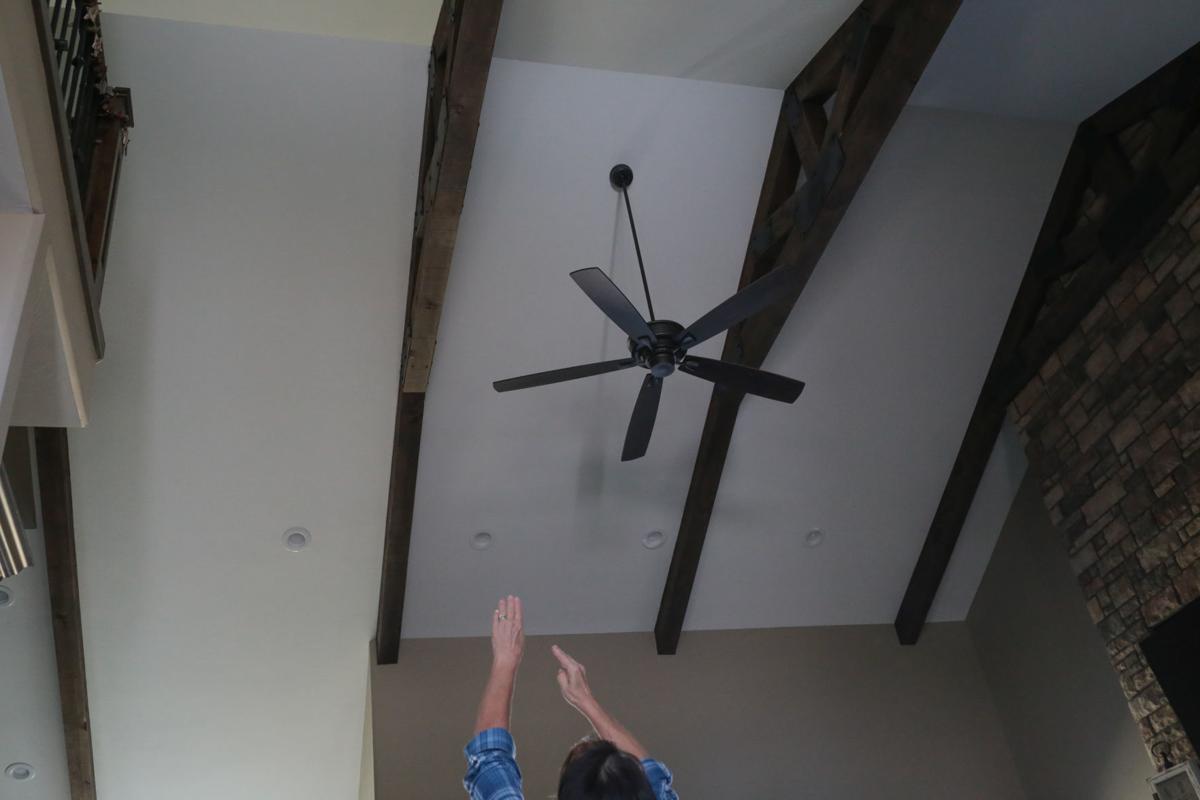 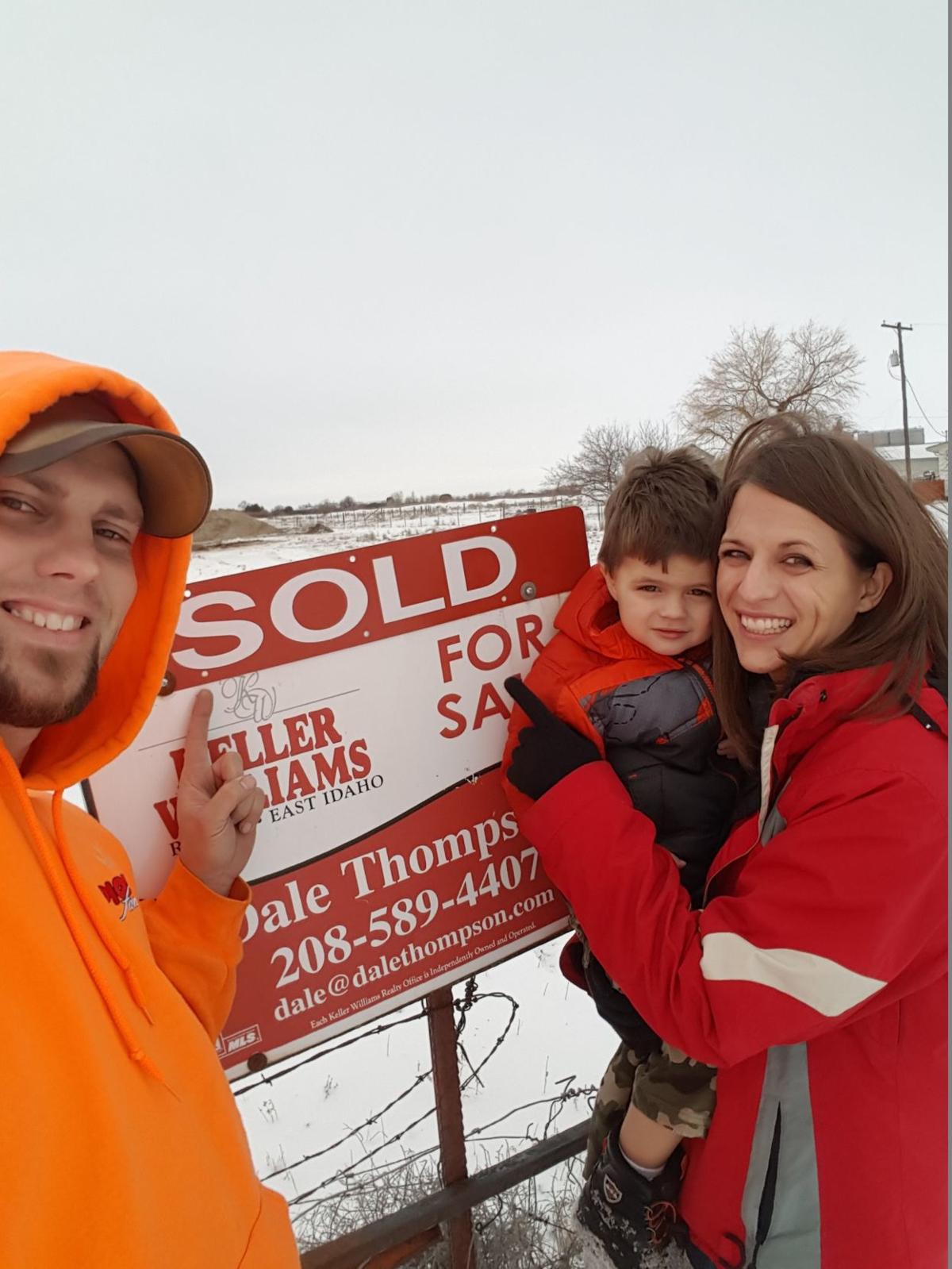 Todd Piquet with his wife wife and child after buying the property on which his house was being built. Piquet later lost the house before it was finished due to issues with the contractor he hired.

Vern Piquet poses for a photo outside of his home on Tuesday, July 7, 2020. Piquet planned to retire but has been spent more than $400,000 to fix his home.

Cindy Piquet shows a photo of the stairwell that was built incorrectly on Tuesday, July 7, 2020.

Roof beams are seen misaligned with the apex of the ceiling at the Piquet home on Tuesday, July 7, 2020.

Cindy Piquet goes through photos of her home under construction on Tuesday, July 7, 2020.

Todd Piquet with his wife wife and child after buying the property on which his house was being built. Piquet later lost the house before it was finished due to issues with the contractor he hired.

Todd Piquet did not think he needed to do a background check when a childhood friend offered to build him a house.

He said it would have made him feel like an “awful person” to worry about the honesty of someone he had known since he was 3 years old.

It was a decision Todd would come to regret.

Skyler Dabell, the contractor hired by Todd and his parents, Vern and Cindy Piquet, never finished either of their houses. Dabell was contracted to build the two homes worth a combined $546,000. Both Todd and his parents say tens of thousands of dollars Dabell withdrew from their loans is unaccounted for, and the shoddy work he oversaw cost them hundreds of thousands more in repairs.

In June, Dabell was charged with grand theft after he reportedly used a company credit card from Constructions Solutions Company, his employer, to spend $30,000 on personal expenses. Those charges were not related to his dealings with the Piquets.

A preliminary hearing is scheduled for 1:30 p.m. Wednesday in the Bonneville County Courthouse. If convicted, Dabell faces up to 14 years in prison.

Since the Post Register reported on the arrest, more than half a dozen people, including customers and subcontractors, have contacted the Post Register to say Dabell stole or misused funds meant for other purposes.

The Piquets have been in contact with more than 30 people who say they are owed money by Dabell, received inadequate services or saw Dabell misuse funds.

The Piquet family shared records of their interactions with Dabell with the Post Register, including receipts, text messages and court records. The documents show the family suffered severe financial losses, both due to money that was unaccounted for and that had to be spent redoing work on the house that was not to code.

“In 2015 my wife and I hired Skyler Dabell to build a new home for us on county line road,” Todd Piquet wrote in a complaint filed with law enforcement who were investigating Dabell. “While considering other builders he had convinced us of the quality of his work by walking us through his house, claiming that he had built the house himself.”

Todd also recommended his friend to his parents, who were looking to build a home for retirement. He said he later learned Dabell had not built the house that he represented as a sample of his skills on his own.

At first, work seemed to proceed according to plan. Dabell used loans the family had taken to set up the framing. However, Todd Piquet became suspicious after one of Dabell’s workers admitted to having no prior experience building a house.

Dabell was making withdrawals from Todd’s account for items that didn’t seem ready for installation, such as cabinets and shingles. He said Dabell told him it was better to order those items early so they would be ready when it was time to install them.

“Just trust me, man,” Dabell said, according to Todd. It was not the last time Todd would hear those words from his childhood friend.

Todd’s bank raised concern when work on the house did not proceed according to schedule.

“Someone from Zions Bank contacted me and asked how the house is going(.) I told them we are still waiting for trusses and they were very scared for me because we’ve drawn over $105,000 and still don’t have a roof,” Todd texted Dabell in November 2016.

Vern and Cindy had their own suspicions. When the roof was built, water pooled at the top, lacking a slope to run down.

When Dabell set up the house’s trusses, there were six left over on the ground. They asked him about it, and Dabell claimed they were extras sent by the subcontractor.

Later, they would hire a new contractor to finish the house. When he first examined it, the contractor noted they were missing six trusses.

Later, when the roofer arrived to install the shingles, he warned them the roof wasn’t ready.

Cindy showed the Post Register pictures of the roof that showed the boards were not screwed to the trusses. This meant the roof was unable to support much weight. The roofer said that if he tried to attach the shingles, he would fall through the ceiling.

These were problems Dabell told Vern and Cindy he could fix in a day. They fired him on Halloween. When their new contractor examined the house, he told them much of the work needed to be redone, and it would likely take six weeks. The wood used for framing the house was a cheap substitute that would not be able to support the house’s weight when it was finished.

“If it hadn’t been for him, our roof would have caved in that winter,” Cindy said.

Shortly after Dabell was fired by Vern and Cindy, he quit working with Todd as well.

“I told your parents them pulling their plug would not just effect them, but our relationship as well,” Dabell said in a text message to Todd.

In addition to the money spent redoing work on the houses, the family also noticed money Dabell had withdrawn that was unaccounted for.

Todd said Dabell made withdrawals from his bank loan twice for trusses. When he confronted Dabell, he was told the withdrawal was in place of a line item the bank was not willing to fund yet. Dabell said he would balance it out with funds later.

Todd called Building Materials & Construction Solutions to ask them when the trusses would be available. He then learned Dabell had not ordered any trusses, despite having twice taken money from the bank for them.

Vern and Cindy showed receipts to the Post Register, as well as their own math finding about $130,000 of their $365,000 loan was unaccounted for. One of the receipts said “Island Park,” despite the fact that their house was being built in Bonneville County.

Todd filed a lawsuit against Dabell in 2017. The complaint alleged that Dabell had made withdrawals from Todd’s $181,000 loan for materials that were never requested and that Dabell had said he would refund the money, but he never did. Todd showed the Post Register text messages from December 2016 in which Dabell said he would refund him and admitted to owing $45,000, money Todd said he was never paid.

The Piquets said they suspect money meant for their property was used on other projects Dabell was working on, an allegation made in the lawsuit. Todd confronted Dabell about the issue in text messages.

“We never at any point in time authorized you in any form to use ANY of our funds designated for our project for ANYTHING other than what it was intended for,” Todd said in the text.

Dabell and his attorney responded to the lawsuit, denying several of the allegations.

Though the case was investigated by law enforcement, no charges were filed against Dabell. Todd said he was told by prosecutors that because there was no proof Dabell took the money with the intent to steal it, it was unlikely he could be prosecuted.

Todd was forced to accept a settlement on his civil case. A condition of the settlement was that Todd could not say what the amount was, though he did say it was less than the $45,000 he had sought. His lawyer said going forward with the suit would likely cost them more money than they would win. Since the lawsuit was settled, Todd has lost the $181,000 house Dabell worked on. It was never finished while Todd was the owner.

Vern and Cindy now live in the house Dabell started after their second contractor redid much of the work. They said it cost nearly twice their original $365,000 budget to complete, and that Vern, who’s 64 years old and had planned to retire, will likely work for the rest of his life due to the expenses.

Todd said his goal in contacting the Post Register was not to get money or to hurt Dabell, but to raise awareness of his actions.

“I don’t even care if he pays a penalty for any of this,” Todd said, “If he just stops and the public knows there’s good builders and bad builders out there. Do your homework.”

After criminal case filed, others claim they lost money to Dabell

Editor's Note: This article has been edited to clarify that Kyle Taylor was a subcontractor hired by Skyler Dabell.