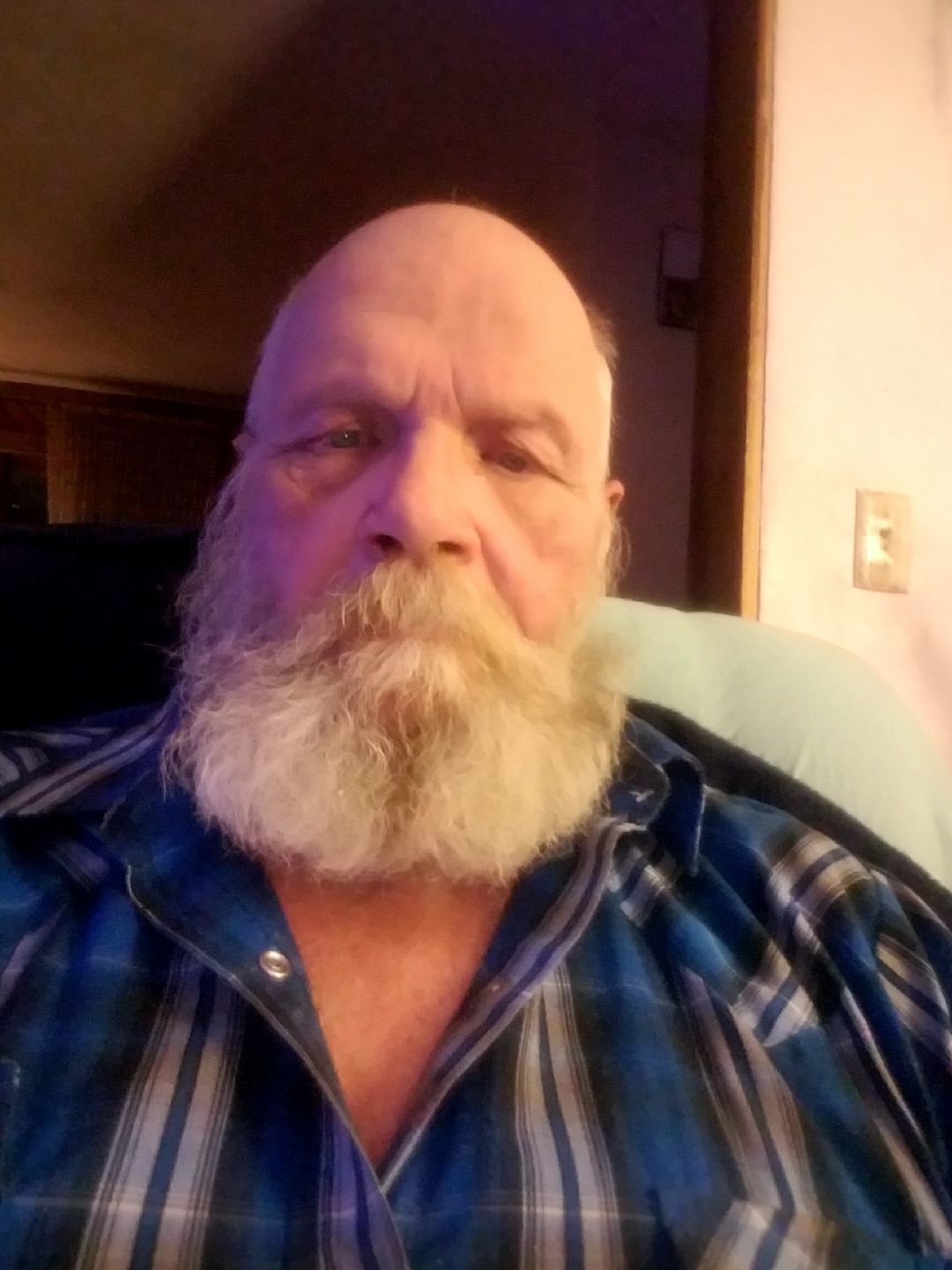 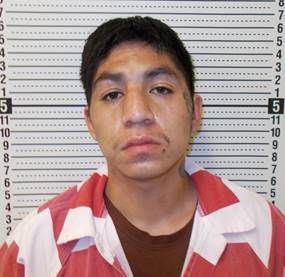 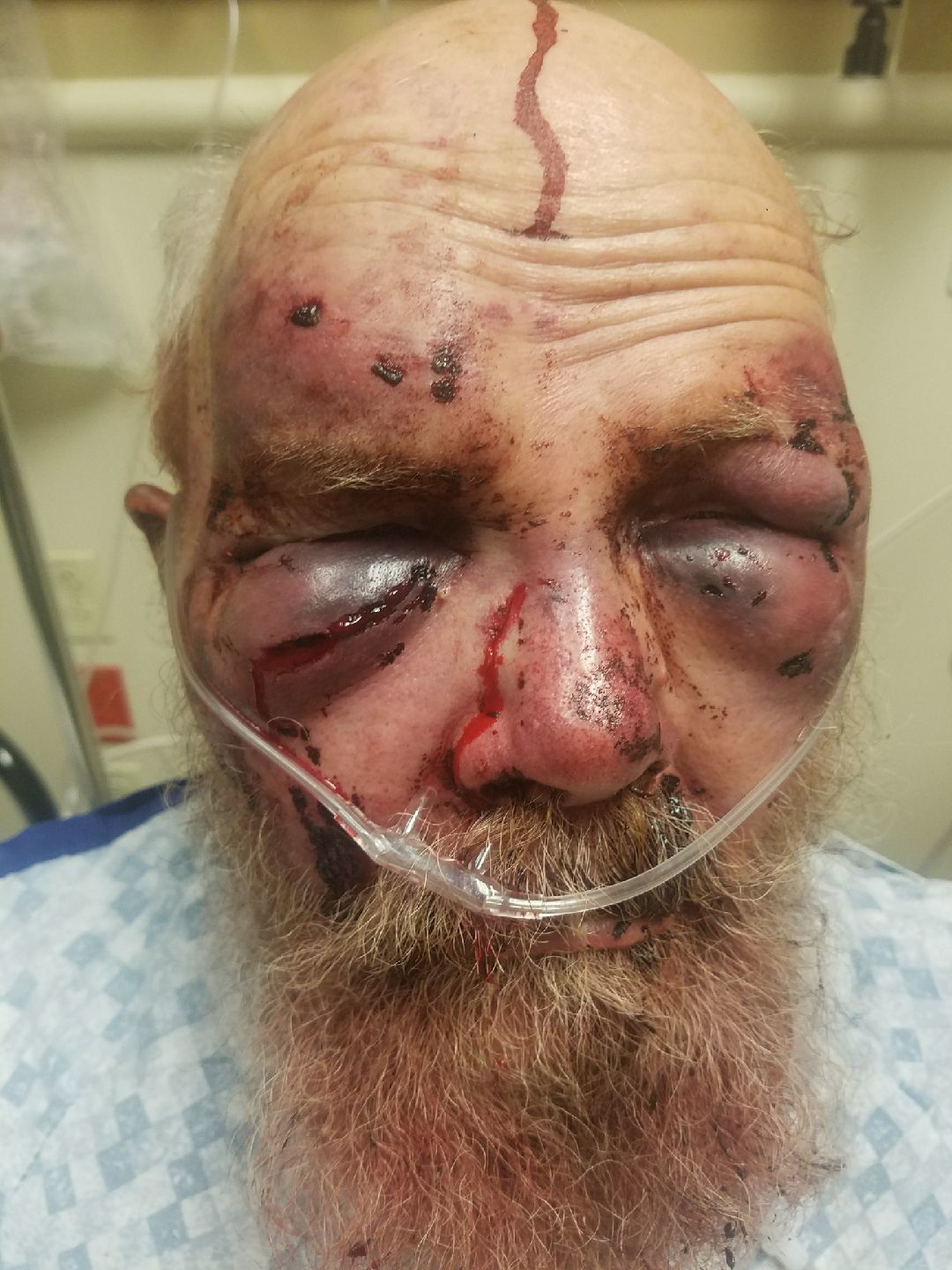 Amos Phillips of Camdenton, Missouri, was severely beaten last month while sleeping in his parked semi at the TP Truck Stop off of Interstate 15 in Fort Hall.

POCATELLO — The Fort Hall man who allegedly bludgeoned a Missouri trucker at a truck stop in Fort Hall in September was federally indicted Tuesday on assault charges in Pocatello.

Stormy Ray Adakai, 23, faces up to 10 years in prison if convicted of the charge against him. But the truck driver, Amos Phillips, who was left with several broken facial bones and a blood clot in his brain after the attack, thinks his alleged attacker should face even more severe charges.

“I don’t think they are charging this man hard enough,” Phillips told the Journal during a Wednesday phone interview. “There are several charges that the prosecuting attorney’s office said they aren’t going to file, (including) breaking and entering and attempted robbery. They have charged him with assault, but I think it should be attempted murder.”

During questioning from the Fort Hall Police and FBI earlier this month, Adakai admitted to breaking into Phillips truck and assaulting him at the TP Truck Stop off of Interstate 15 in Fort Hall in September in an attempt to get money from Phillips, according to a news release from the Shoshone-Bannock Tribes.

But after learning Adakai had been indicted by a federal grand jury sitting in Pocatello on just one count of assault resulting in serious bodily injury on Tuesday, Phillips said on Wednesday that he contacted Jack Haycock, an assistant attorney with the U.S. Attorney's Office for the District of Idaho, to discuss the nature of the charges.

Phillips said Haycock explained to him that additional charges were not filed because of the way in which the Fort Hall Police Department investigated the scene of the crime. Phillips said Haycock told him the Fort Hall Police Department should have immediately dispatched a detective to investigate and obtain physical evidence from the scene, something Phillips claims didn’t happen, based on his frequent conversations with Fort Hall police.

Haycock told the Journal during a Wednesday phone interview that the U.S. Attorney's Office for the District of Idaho “filed the charges that we felt we could prove beyond a reasonable doubt,” and he confirmed speaking to Phillips but didn’t divulge specific details about the conversation.

“It may be that I said some things to a victim who had concerns about the case, but I cannot comment publicly on those topics,” Haycock said.

The Shoshone-Bannock Tribes declined to comment on this article when contacted by the Journal on Wednesday.

Phillips claims Fort Hall police acknowledged to him well after the attack they hadn't recovered crucial evidence including fingerprints, potential sources of DNA and the weapons Adakai confessed to using in the attack, two rocks.

Furthermore, Phillips says that the only physical evidence recovered at the scene, a baseball cap that police say Adakai confessed to owning, was not obtained by tribal police until Phillips returned to the truck to retrieve some belongings almost two full days after he was attacked.

Phillips said that when he refused to give Adakai any money, Adakai allegedly began pummeling him in the face with rocks in his hands. Eventually, Phillips said he was able to kick Adakai out of his truck, and Adakai ran off into the darkness.

The rocks allegedly used in the attack were never recovered, Phillips said, adding that a co-worker who drove the truck back to Missouri mistakenly disposed of them when he was preparing the truck for transit.

“When my son picked me up from the hospital we went back to the truck to pick up a few of my things before we went back to Missouri,” Phillips said. “I discovered the ball cap and called Fort Hall police who came out and picked up the cap.”

Phillips claims Fort Hall authorities told him they still hadn't sent the cap to an Idaho State Police forensics lab for testing three weeks after he was attacked.

Tim Marsano, public information officer for the Idaho State Police, said in a Wednesday email to the Journal that ISP would not comment on when the forensics lab received the cap, which of the three ISP labs received the cap or whether or not the cap was ever received by ISP forensics staff at all.

Information about the brutal attack that left Phillips twice hospitalized — first at Portneuf Medical Center in Pocatello with several broken facial bones and deep lacerations to his head, and again a few days later in Missouri after Phillips started experiencing seizures and convulsions stemming from a blood clot in his brain — wasn't released to the public until he told his story to the media last month.

Fort Hall authorities did not release any public statements about the attack until six weeks after the alleged assault occurred and Phillips’ story first appeared in the national trucker magazine, Overdrive.

The Shoshone-Bannock Tribes said in a statement last month that Fort Hall police officers collected the ball cap left behind at the scene and it was sent to the Idaho State Lab for DNA testing. Furthermore, the Tribes said that police records indicated fingerprints were recovered at the scene but were smudged.

Despite the fact that the rocks allegedly used in the attack were not recovered by authorities, the federal indictment filed against Adakai alleges that on or about Sept. 2, 2018, Adakai assaulted a victim by intentionally hitting him in the face and head with rocks, resulting in serious bodily injury.

Since the attack, Phillips said has been unable to return to work and has at least $30,000 in medical bills and no means to make the payments.

“If that man would have kept hitting me for another 30 seconds you wouldn’t be talking to me today,” Phillips said. “Here it is three months later and I am still having balance trouble. I fell down onto the living room floor yesterday.”

Phillips, who has worked for the Camdenton, Missouri-based JWE Inc. trucking company for many years, says he may never be able to return to work.

“I am on a pill to keep the seizures down that I have to be on for five years seizure-free before doctors will medically clear me to drive a truck again,” Phillips said. “I’m almost 65-years-old now. Who is going to want to hire a 70-year-old semi-truck driver?”

To offer some relief for Phillips, the owner of JWE Inc., John Williams, created an online fundraiser accessible by visiting bit.ly/2z5D2Pr. As of Wednesday evening, $8,100 of the $10,000 goal has been raised.

According to the U.S. Attorney's Office for the District of Idaho, an indictment is a means of charging a person with criminal activity, but it is not evidence. Haycock said that the federal indictment and charge of assault resulting in serious bodily injury is separate from any charges Adakai faces from Fort Hall prosecutors, adding that federal prosecution will occur after charges in Fort Hall are adjudicated.

Fort Hall Police Chief Pat Teton told the Journal last month that Adakai faces charges in Fort Hall of one count of aggravated assault and one count of robbery, both felonies.

Adakai was arraigned on the two Fort Hall charges in tribal court on Nov. 9, where he pleaded not guilty to both charges. An aggregate cash bond amount of $750 was imposed by a tribal judge.

Following the attack on Phillips, the Shoshone-Bannock Tribes released a statement stating this was “the first time an incident of this type occurred at any of the Tribal gas stations on the Fort Hall Reservation and the Tribes along with the Fort Hall Casino and Tribal Enterprises are taking preventative actions so it does not occur again in the future.”

Haycock said this case remains under investigation by the Federal Bureau of Investigation and the Fort Hall Police Department.

In addition to facing up to 10 years in prison if convicted of the federal assault resulting in serious injury charge, Adakai faces a maximum fine of $250,000 and up to three years of supervised release.