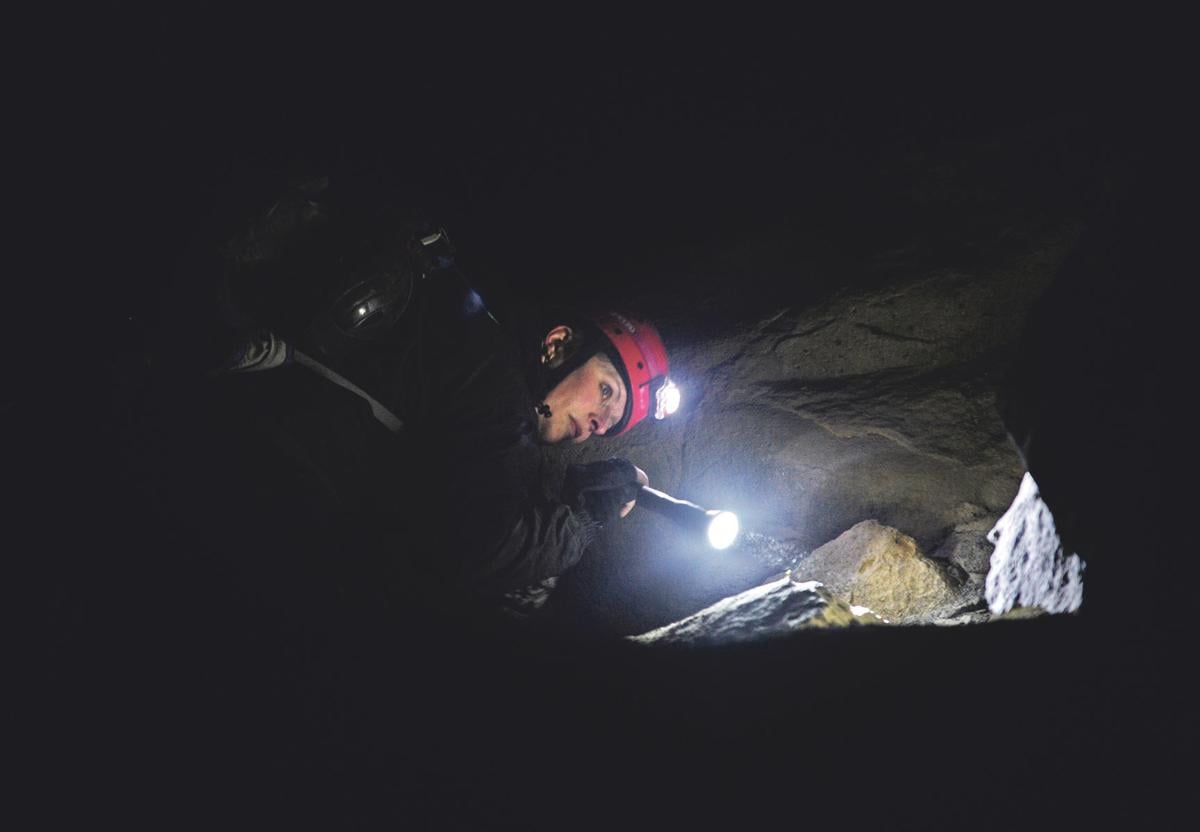 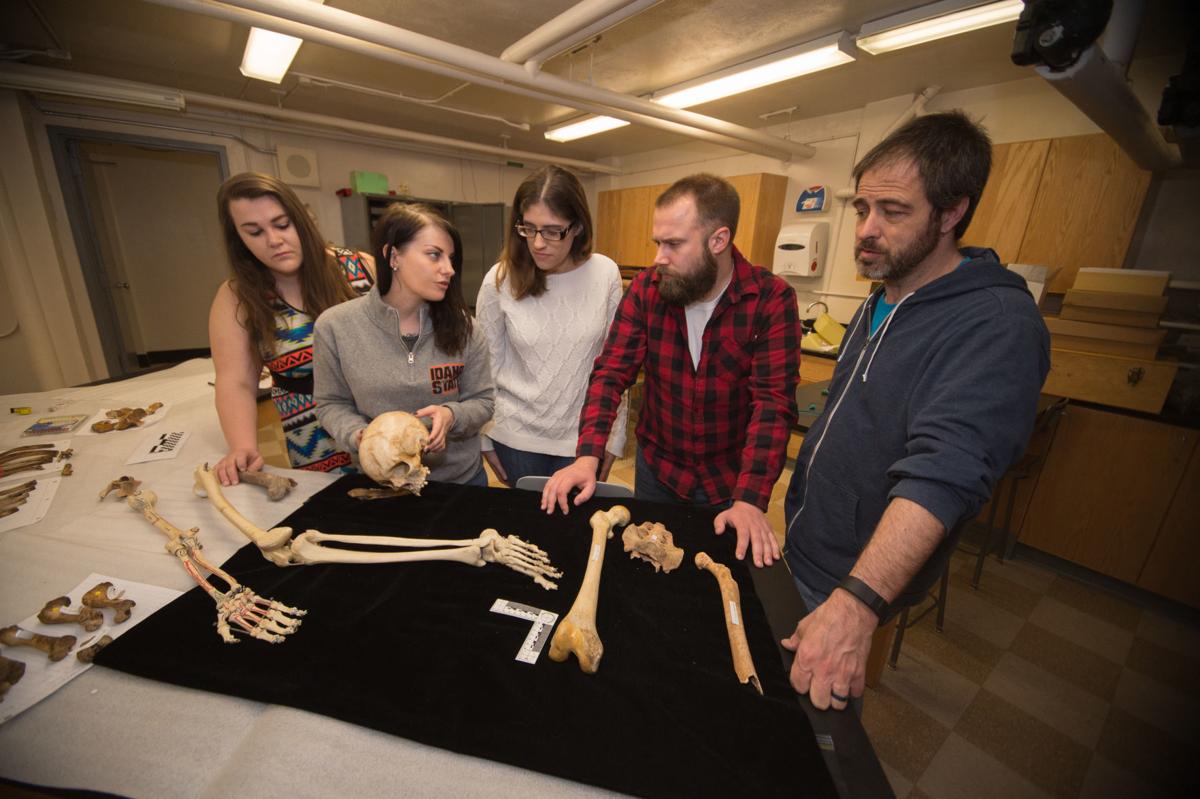 Professor Amy Michael (second from the left) and Professor Christian Petersen (far right) study bones with graduate students at Idaho State University. These are not the same bones recovered from Buffalo Cave. 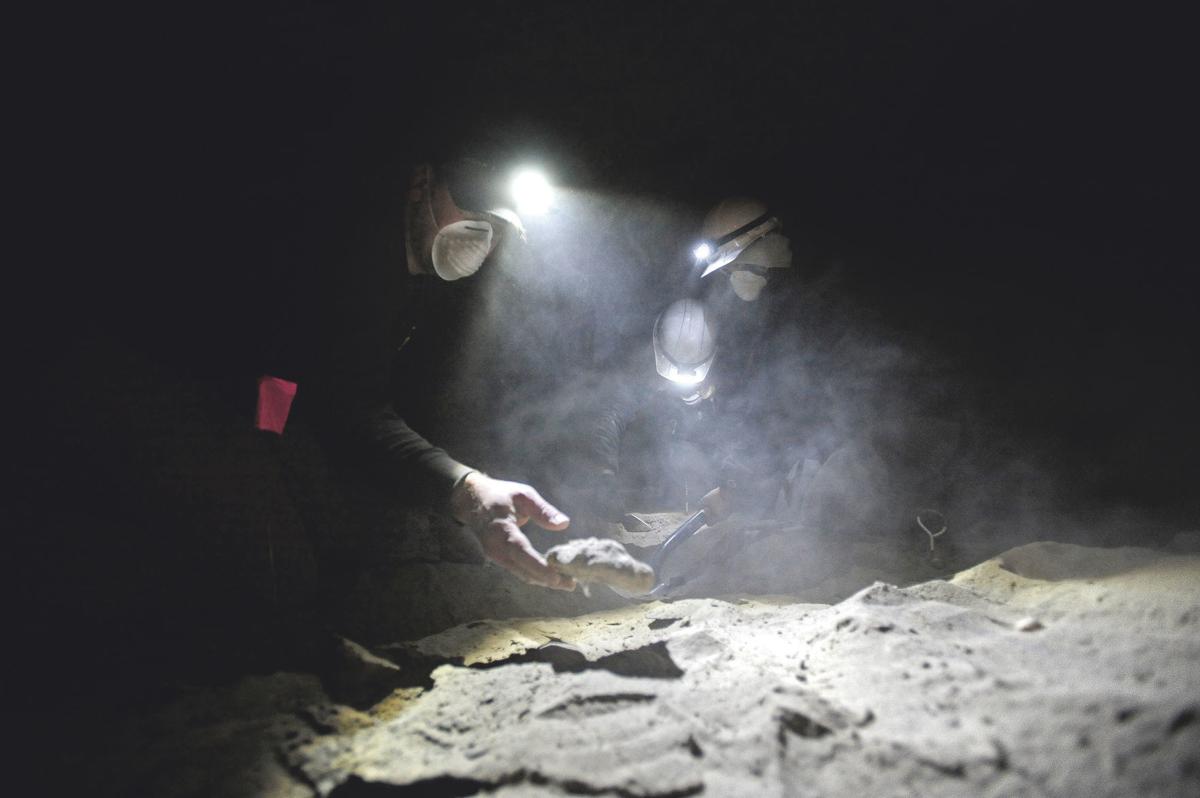 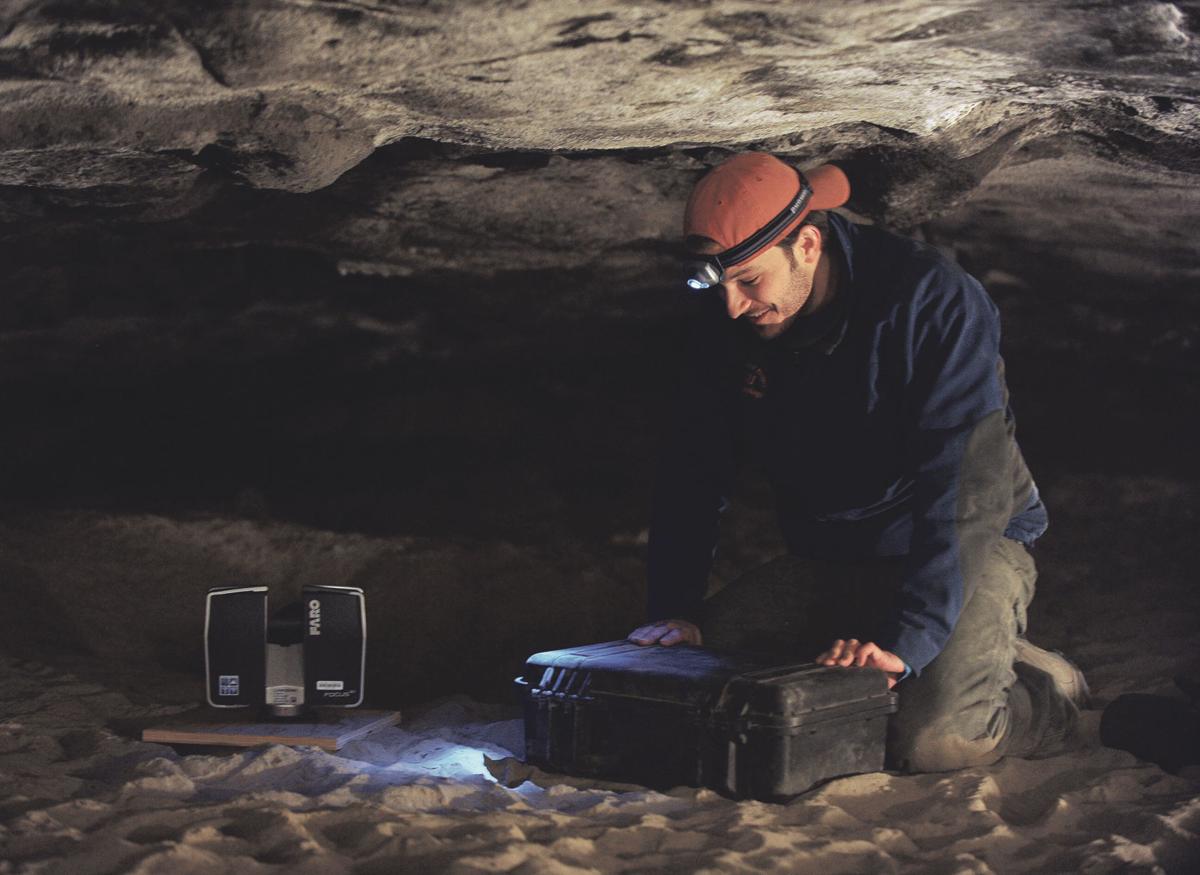 Research Associate Nicholas Holmer sets up the FARO Focus 3D Lidar Scanner, in this 2015 file photograph, at the dump sight of a cold case murder from 1974. With the scanner, Holmer will be able to make virtual schematics of the cave, which will hopefully assist anthropologists and police officers in locating the head of the body.

Professor Amy Michael, Ph.D., and the Clark County Sheriff’s Office hope the testing can shed light on the mystery of how a mummified human torso ended up in Buffalo Cave, also known as the Civil Defense Cave, near the Montana border.

The mystery began in 1979 when a family searching for arrowheads came upon a male torso. The arms and legs were found 12 years later, but the head has never been located.

All of the body parts were mummified and wrapped in burlap.

Clark County Chief Deputy John Clements said cuts on the corpse indicate someone dismembered the body with a saw.

Identifying the remains has stumped anthropologists and forensic scientists nationwide. Michael, a former ISU anthropology researcher who now works at the University of New Hampshire, said the bones from Buffalo Cave case have been studied at the Smithsonian and the FBI and are now kept by ISU, often used to help teach anthropology students.

“That’s a good thing. It helps train more forensic scientists,” Michael said. Even so, it bothered her the individual who provided those bones remained forgotten. “I thought more could be done.”

Attempting to solve the case has become something of a ritual at the university. Christian Petersen, a professor in the anthropology department, has worked on the case for 20 years.

“Every forensic anthropologist who has come through ISU has taken a shot at solving this, and I think it is great,” Petersen said in a news release from the university. “This is science. If you don’t solve the problem, you put it down a couple of years and try again. Remember, this is an individual who was murdered and then cut up into pieces and buried in a cave. His family never knew what happened to him. I would love it if this case was solved.”

Michael hopes new forensic DNA testing can help identify the John Doe. The new tests involve the same testing that has solved cold cases nationwide, including the Angie Dodge murder. Michael has been working with DNA Doe Project, an organization that raises funds to identify John and Jane Does. DNA Doe Project would extract the genetic material from the bones

“Using autosomal DNA comparison, which is what is used by forensic genealogists, a file can be uploaded to GEDmatch that will produce a list of potentially hundreds of cousins with which we can build an extensive family tree,” said Anthony Redgrave, the researcher in charge of the Clark County case at DNA Doe Project. “By triangulating segments of matching DNA to common ancestors, we can determine how all of these cousins are related to the unidentified person, and home in on the family group where we may find our John Doe.”

Clark County Chief Deputy John Clements was assigned to the investigation in 2014. Over the past five years, it has been difficult to make progress. Clements is one half of a two-person sheriff’s office covering 1,765 square miles. Most of his time has to be devoted to more immediate cases. When he gets time to devote to the Buffalo Cave murder, Clements often has to use hours to refresh himself on the details before a fresh case comes up.

Michael said the body could have been in the cave for as long as five years, though it’s hard to come to a reliable time frame. The clothing found on the body parts appears to be from the 1960s or early 1970s.

In 2015 Clements searched the cave in the hopes of finding the head, the most important body part for identifying a person. A head could provide dental records or have other features to help identify the victim. The head was never found, though Clements still suspects it’s somewhere in the cave.

There is one case, however, that Clements has suspected is connected to the body, and he’s been working to establish a connection.

Sometime in the 1970s, two shepherds in Dubois were in a fight at a local bar. The house they lived in later caught fire. One of the shepherds impeded the fire trucks from dousing the flames. The other was not seen again.

Clements was able to identify the survivor as Martin Mallady. The other was known as John Green, though Clements never found a record of anyone by that name living in Dubois.

Mallady died in a Montana prison in 1990. Clements did not know much about Mallady’s history because the prison records were disposed of long before he was assigned to the case. Newspaper clippings from Montana and Illinois show Mallady had a history of theft and check fraud.

“He was not a real class-act kind of guy,” Clements said.

No evidence has been found, however, connecting the shepherds to the body parts found in the cave. As for John Green, Clements learned one fact about him from witnesses — he appeared to be of Spanish and possibly Basque descent.

With the DNA tests, Michael and Redgrave could create a family tree and pinpoint potential identities for the John Doe. Confirming he had Basque ancestors would not be a smoking gun against Mallady: Idaho has a large population of Basque Americans. Finding the victim’s ancestors, however, could provide evidence for Clements’ theory or clear Mallady of suspicion.

Michael said she needs $2,300 to perform the tests. Though genetic genealogy has been a promising new tool for law enforcement, it’s can be expensive for smaller departments. As of Wednesday, she had raised $470, allowing her to perform the first extraction. More extractions and testing will be performed as the funds become available.

“It would be very easy to put these bones on a shelf and be (forgotten),” Michael said. “The indignity of this man being laid out, that really bothers me.”

The DNA Doe Project DoeFundMe site for this specific case is dnadoeproject.org/case/clark-county-john-doe/.

Interested parties also can contact ISU Department of Anthropology Christian Petersen at petechri@isu.edu or 208-282-4154. Tips related to this case can be reported to the Clark County Sheriff's Office at 208-374-5403.

Idaho State University Professor Sara Getz gets a call and hits the road. In her vehicle, she keeps evidence bags, gloves, tools for cleaning …