State lawmakers passed House Bill 500, also called the Fairness in Women’s Sports Act, this year, but a couple of student athletes, backed by the American Civil Liberties Union of Idaho and the progressive feminist group Legal Voice, are suing to have it declared unconstitutional, and a federal judge has put its enforcement on hold as the case works its way through the courts.

The Alliance Defending Freedom, a socially conservative Arizona-based legal group that helped to craft the bill and has supported similar legislation elsewhere, is asking the U.S. Ninth Circuit Court of Appeals to overturn the stay and let Idaho enforce the law.

The amicus curiae briefs filed Monday all urge the appeals court to reject the Alliance’s position and let the enforcement ban stand. Eight transgender athletes filed a brief telling their stories and arguing the law will “exclude and place severe harms and burdens on transgender athletes that can have life-long personal consequences, as well as create a culture where harassment, violence and discrimination are the norm.” In a separate brief, 176 current and former athletes made similar arguments about the value of sports and the law’s potential harm to transgender girls. 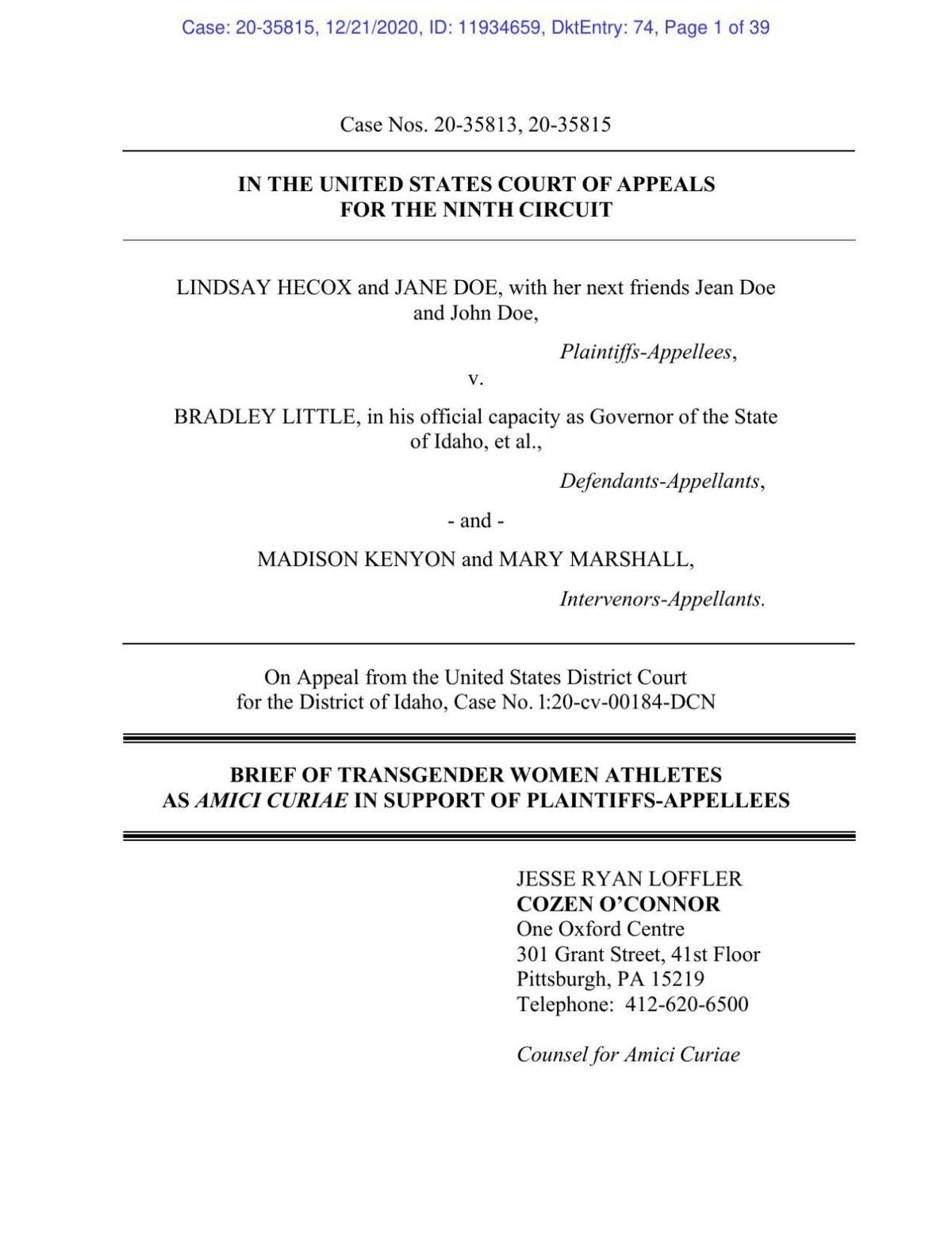 “There is no place in any sport for discrimination of any kind,” tennis icon Billie Jean King, one of the signatories, said in a statement. “I’m proud to support all transgender athletes who simply want the access and opportunity to compete in the sport they love. The global athletic community grows stronger when we welcome and champion all athletes — including LGBTQI+ athletes.”

Other well-known signatories include U.S. National Women’s Soccer Team co-captain and World Cup champion Megan Rapinoe, and WNBA players Layshia Clarendon and Candace Parker. Carl Charles, a lawyer for the pro-gay and transgender rights group Lambda Legal, said the signatories all share “a deep understanding and appreciation of the lifelong benefits that come from participation in sports.” 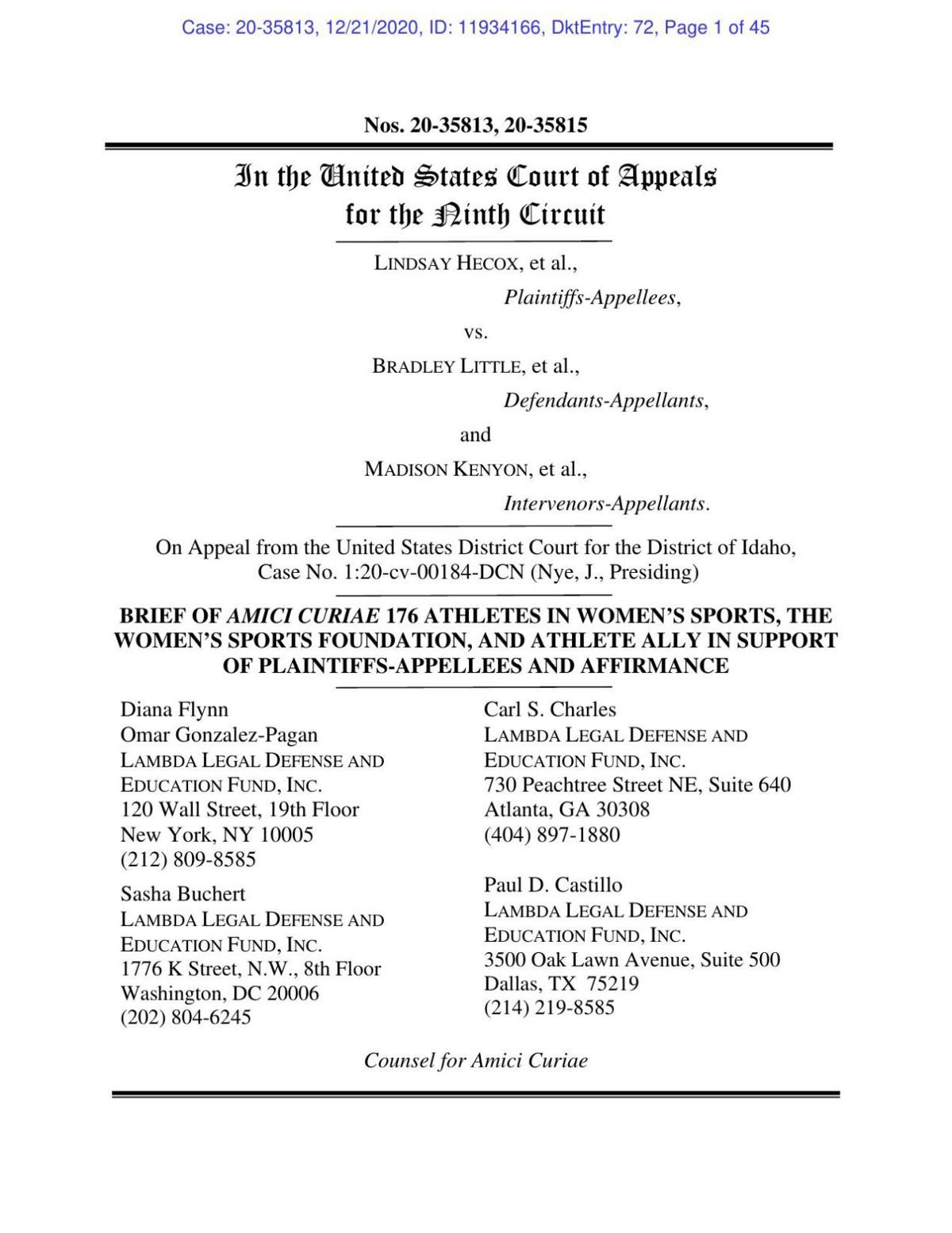 “They acknowledge they would not have accessed these benefits without the guarantee of equal opportunity to participate in sports in primary, secondary, and university schools,” he said. “They recognize the value of inclusive and welcoming sports environments and firmly believe laws like (House Bill) 500 that single out groups of women and girls from participation in sports harm the entire athletic community.”

The attorneys general — Republicans Jim Jones and Wayne Leroy Kidwell and Democrat Tony Park — were among five who publicly urged Gov. Brad Little to veto House Bill 500 earlier this year. Their brief extensively cites a legal opinion current Attorney General Lawrence Wasden’s office, which is on the other side of the case now defending the state, wrote before House Bill 500 passed pointing out potential constitutional problems with it.

“Attorney General Wasden wisely ‘framed his leadership of the office around two fundamental principles: The Rule of Law and calling legal ‘balls and strikes’ fairly and squarely,’” they wrote. “House Bill 500, the Attorney General’s Office correctly discerned, is well outside the strike zone established by the Equal Protection Clause and other constitutional provisions. Nevertheless, the Attorney General must now defend the act and, in the process, needlessly waste public resources that could be employed to support, rather than discriminate against, Idahoans.” 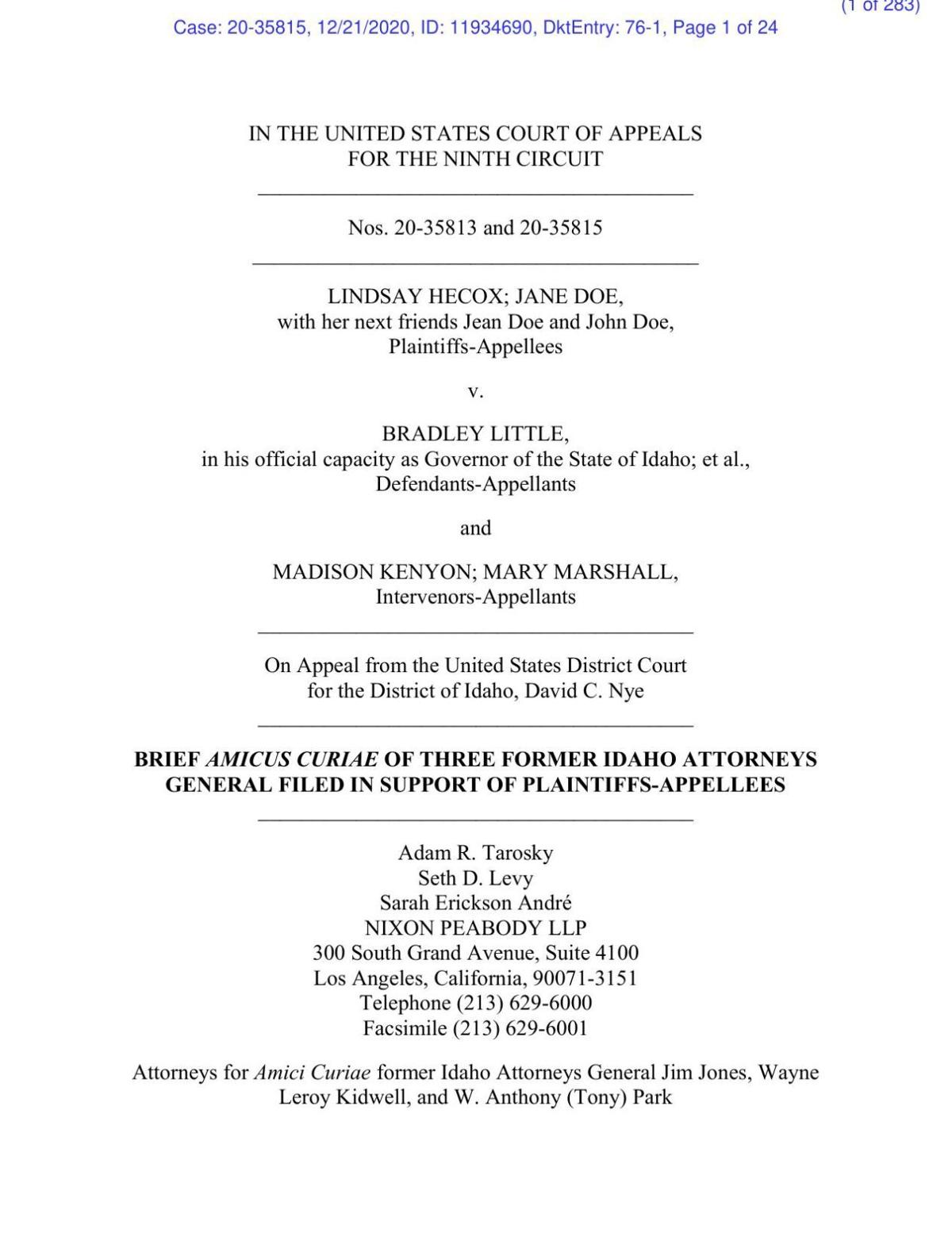 They also criticized the message the law sends to the transgender community.

“In purporting to level the playing field, the act has excluded an entire group of women from meaningful participation in sports,” they wrote.

The American Academy of Pediatrics, the American Medical Association, the American Psychiatric Association and 10 other health care organizations arguing, among other things, that barring transgender girls and women from female sports teams is harmful to the treatment of gender dysphoria, harms them by discriminating against them and denies them the benefits that taking part in sports can bring. 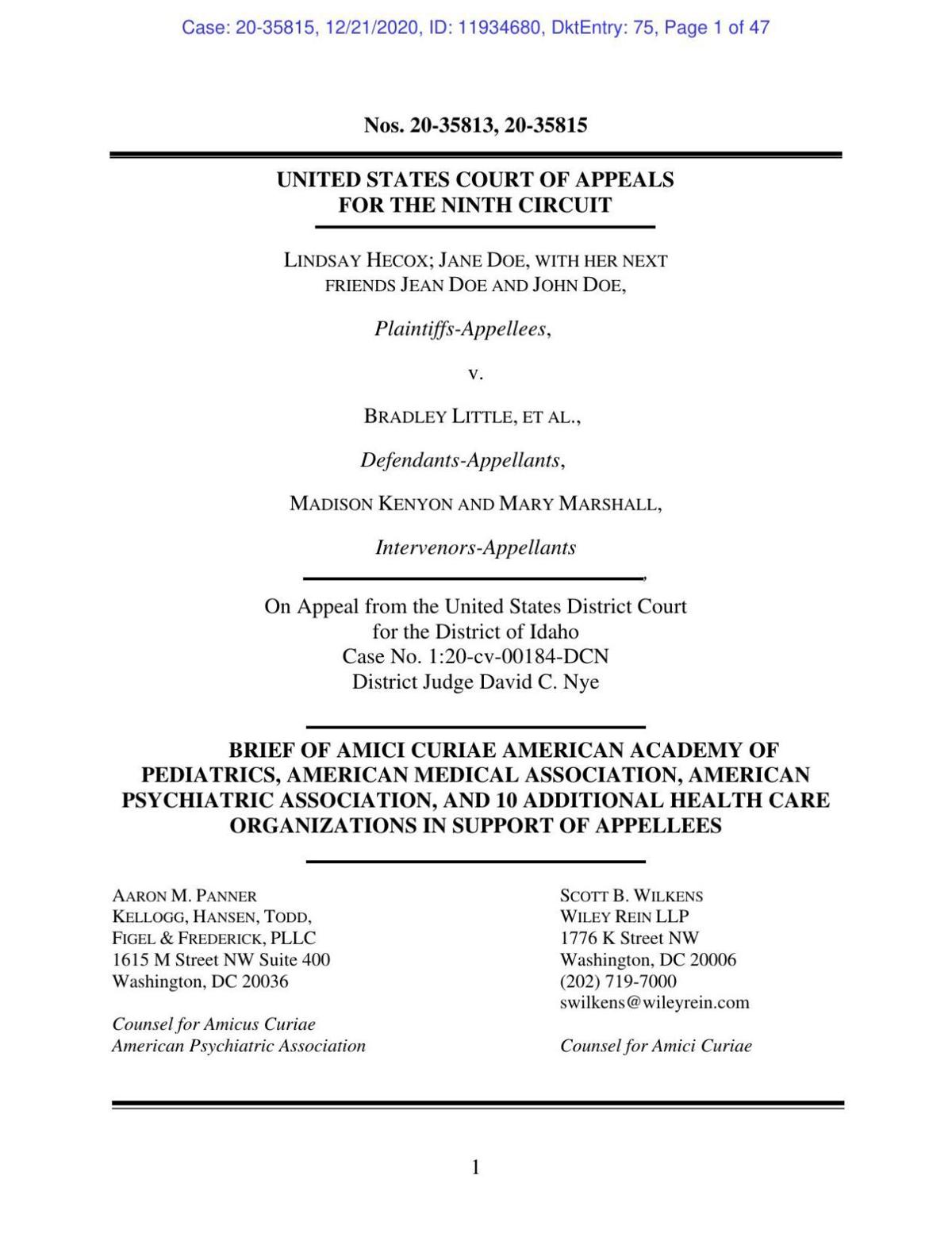 “As the American Psychological Association has concluded, ‘the notable burden of stigma and discrimination affects minority persons’ health and well-being and generates health disparities,’” they wrote. “There is thus every reason to anticipate that the Idaho statute excluding transgender girls and women from school sports consistent with their gender identity will negatively affect their health.”

The group Advocates for Intersex Youth also filed an amicus brief opposing the law Monday, as did a coalition of more than 60 legal, civil rights and other groups including the National Women’s Law Center, the Lawyers’ Committee for Civil Rights Under Law, the Anti-Defamation League, the Southern Poverty Law Center, the American Federation of Teachers and several other unions, NARAL Pro-Choice America, the Idaho Coalition Against Sexual and Domestic Violence, the Unitarian Universalist Association and several women’s bar organizations. 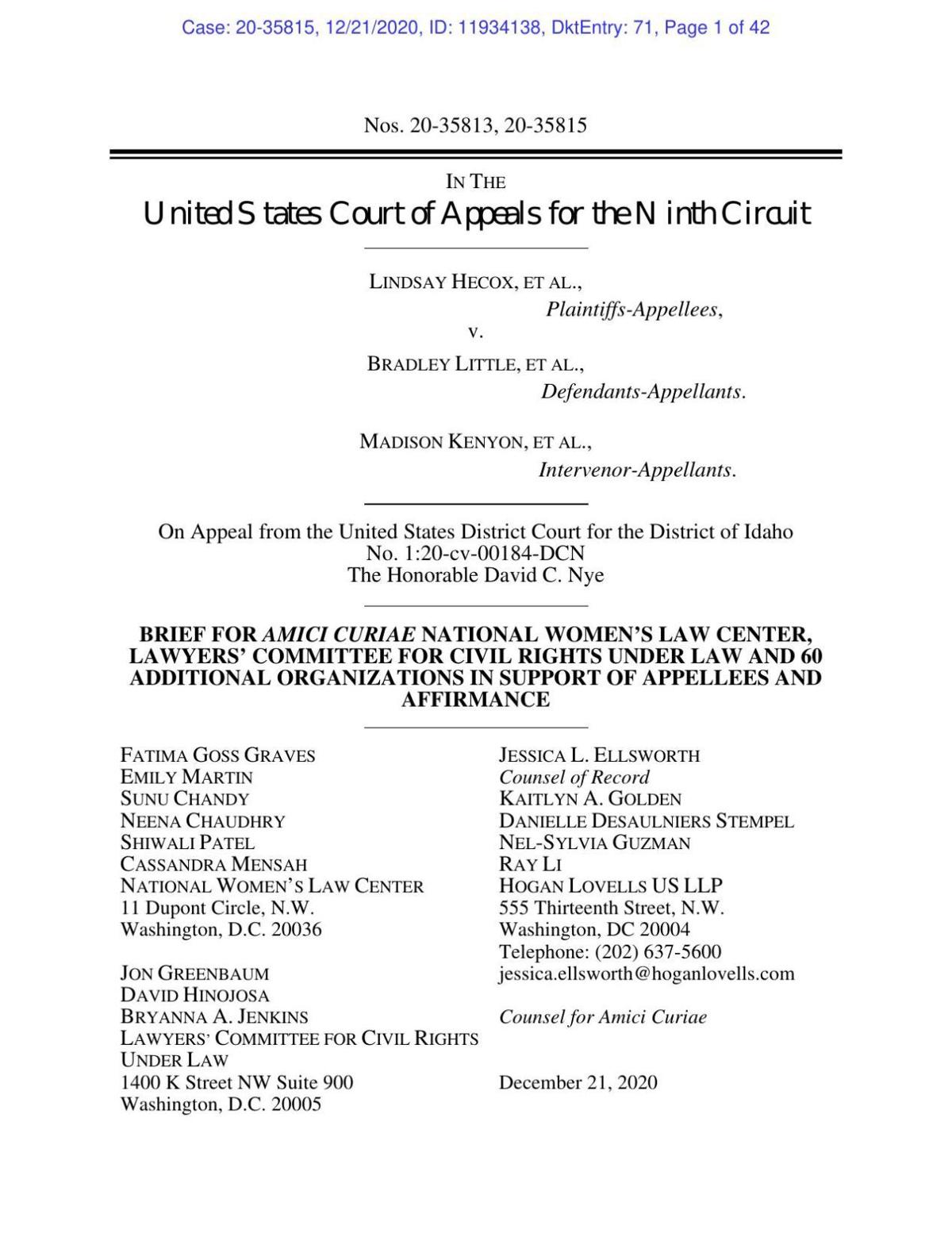