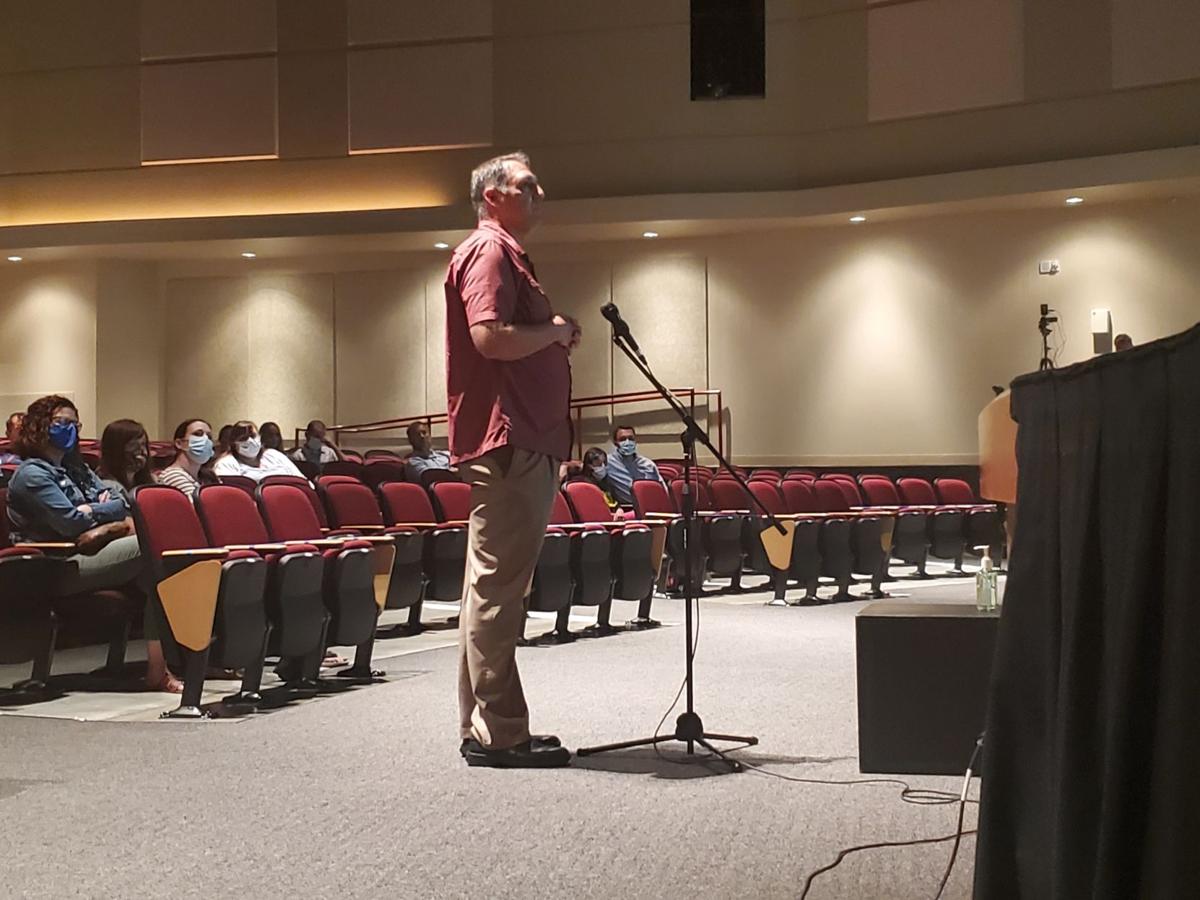 Kevin Anderson speaks to the school board and administrators of Bonneville Joint School District 93 about the plan for the upcoming school year Wednesday night. 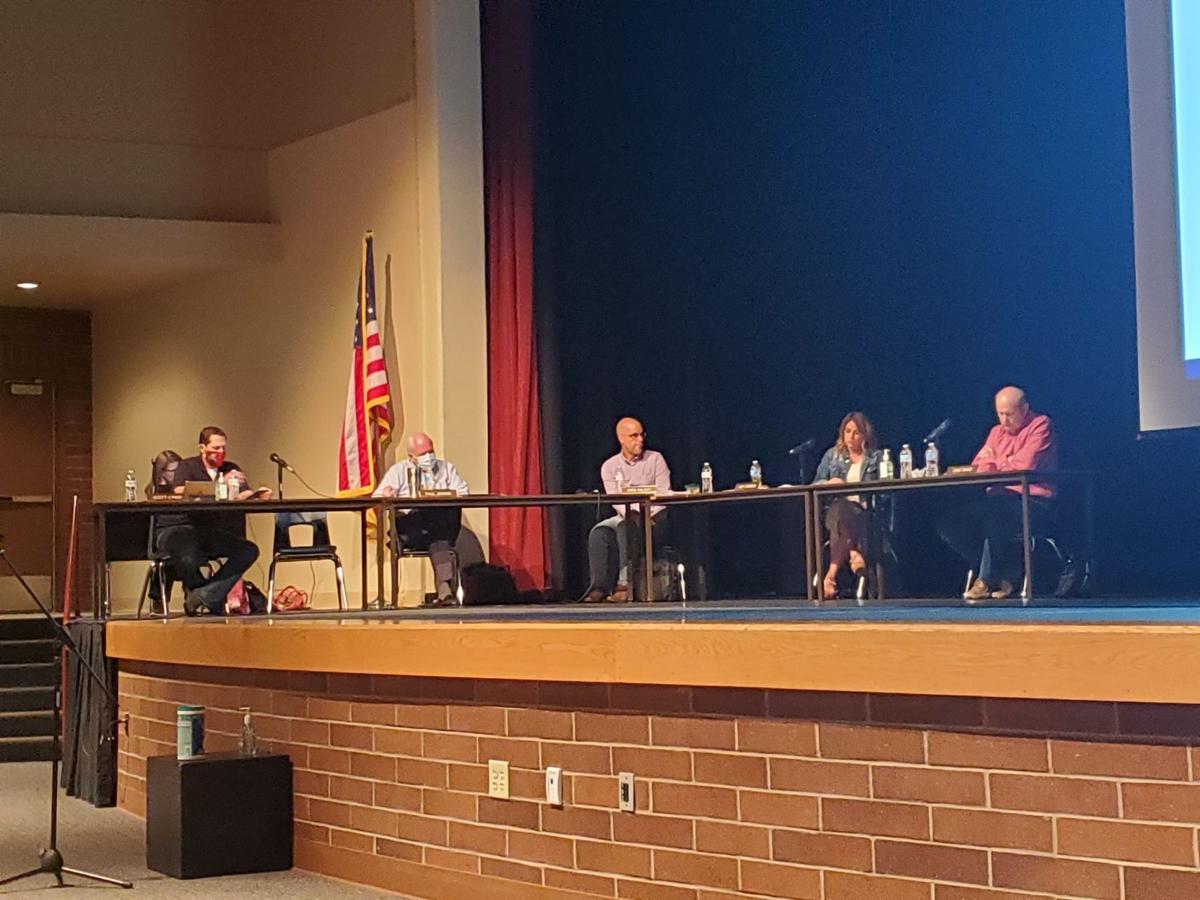 Kevin Anderson speaks to the school board and administrators of Bonneville Joint School District 93 about the plan for the upcoming school year Wednesday night.

Bonneville Joint School District has approved an updated plan for the upcoming school year, modifying its phases to keep students in school for longer and requiring masks at all times.

The special meeting to approve the plan was held in the Hillcrest High School auditorium Wednesday night and lasted nearly four hours, including more than an hour of public comment and feedback from more than a dozen patrons who attended the meeting. The board had approved a preliminary version of the plan two weeks earlier, but changes were made to provide more in-person lessons while still following the requirements of Eastern Idaho Public Health.

The most immediate impact of the new plan is the requirement that all teachers and students will wear masks at school, regardless of what phase of risk the county is in. Superintendent Scott Woolstenhulme said the district has already ordered $30,000 worth of masks for students and staff, and said the face coverings were needed because it was impossible to keep six feet of distance in full classrooms.

Teachers would be able to remove their masks to provide instruction while separated from their students and workarounds would be allowed for students with documented medical issues that would make masks impractical.

“If it’s simply a political statement from parents that they don’t want their kid to wear a mask, we will provide an online option for those students,” Woolstenhulme said.

District 93 could move to more restricted plans for campus access and instruction as Eastern Idaho Public Health evaluates the risk of cases in Bonneville County. Public input at the meeting and in emails sent to the district included multiple requests for the district to use criteria for the restrictions other than active cases of the virus, as is currently the standard for EIPH. In response, Woolstenhulme said that Idaho law prevented any public entity, such as the school district, from violating the restrictions put in place by public health districts.

The lowest-risk phase would see campus access and instruction treated largely the same as in a normal school year, apart from the mask requirement and extra planning days set aside for teachers to prepare online material. The school board planned to survey teachers to determine whether those planning days would be most helpful on Mondays or Fridays. If a student or teacher contracts COVID, the school will be closed for up to two days for cleaning and to allow district and health officials to contact anyone who was exposed to that person.

Dr. Kelly Anderson, a pediatrician working in Idaho Falls, told the school board that his practice had seen a major drop in other infectious diseases after schools and businesses were closed in April. While he said keeping schools open was the best approach for social and emotional health of students, he added that he had seen multiple children in his practice who had recently contracted COVID and that outbreaks during the school year were inevitable.

“We have five cases already and that is going to multiply,” Anderson said.

If the county stays in its current category of “moderate risk,” the classes will largely remain the same as under the full reopening. Extracurricular and athletic events will be capped at 150 people, as currently required by EIPH during that phase, and secondary schools will adjust their lunch schedules to limit large groups. The schools also will more strictly enforce the use of masks during the school day.

The alternating day approach that had been originally planned for the moderate risk category has been pushed back until Bonneville County is designated a “high risk” area. Students will come to school either Tuesday-Thursday or Wednesday-Friday, depending on their last name, and take online classes or at-home projects the other two days. Schools would only move online for an extended period if the county moved into the “critical risk” category, which would likely include a stay-at-home order from the public health office.

Several patrons at the meeting asked the district to reach out to the community for volunteers to help keep school operations going. Board chairwoman Amy Landers said she had been contacted by several people who wanted to provide personal protective equipment for students, while others volunteered to help tutor students after school or take other steps to keep the community at a lower level of risk.

“If there are things that we can do as parents to keep us from going into Phase 3, I’ll sell body parts. We’ll do whatever it takes to keep our kids in school,” said Andrea Stephenson, president of the Parent-Teacher Organization at Ammon Elementary School.