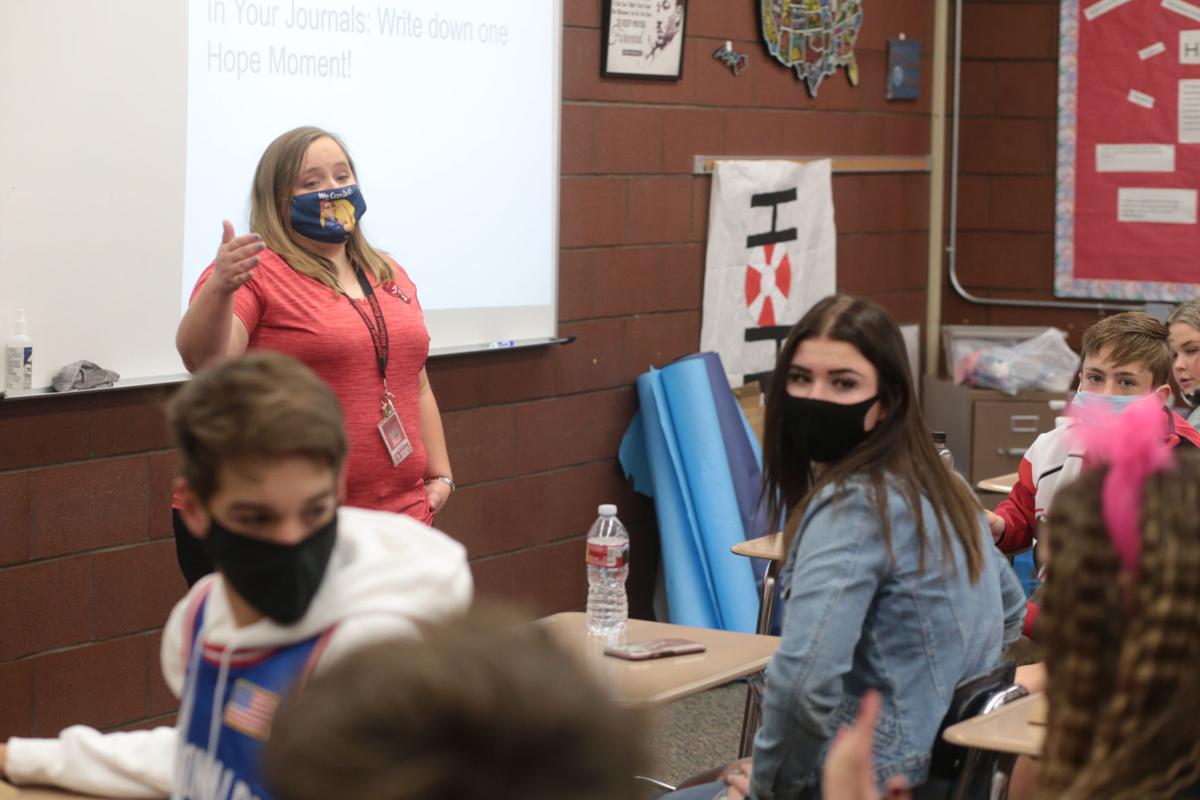 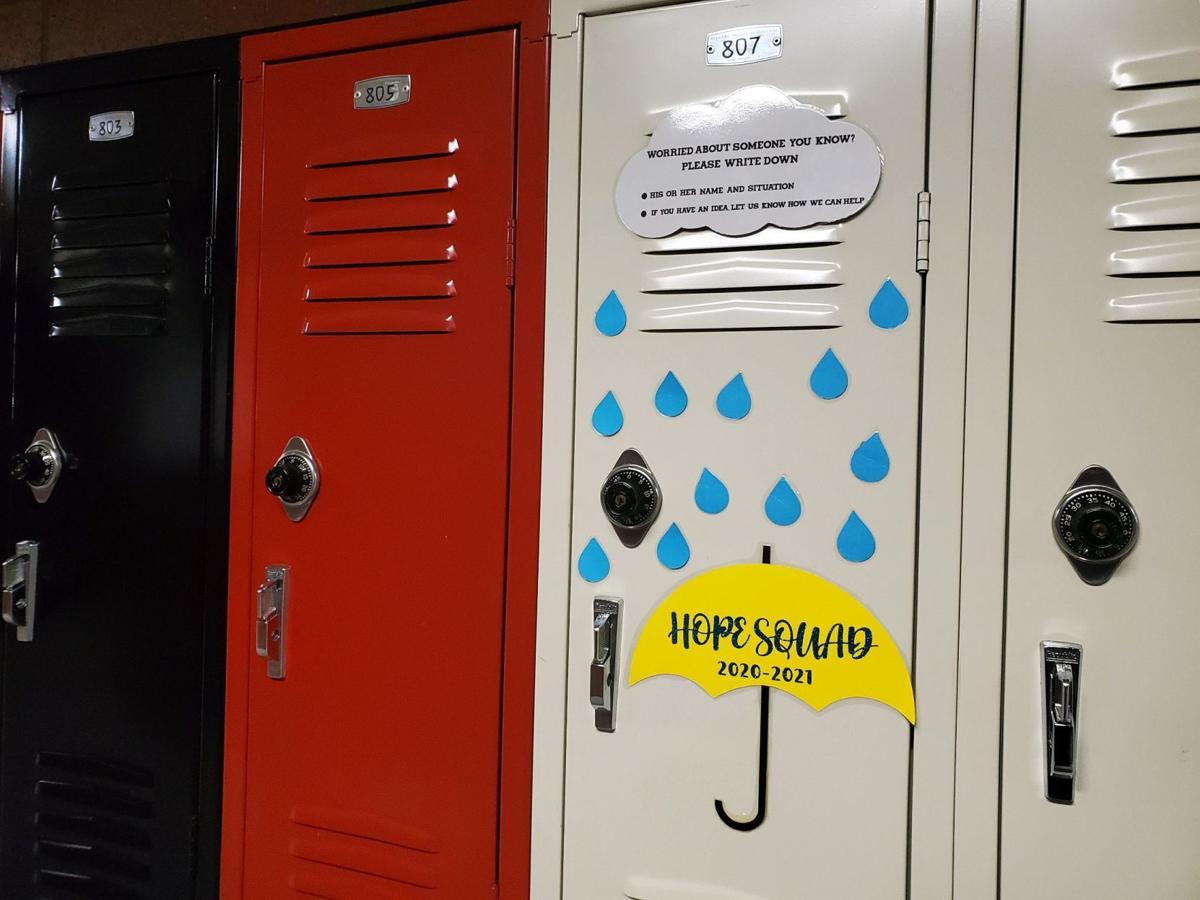 The Hope Squad at Hillcrest High School uses this locker so students can anonymously drop off notes of concern about their friends.

The Hope Squad at Hillcrest High School uses this locker so students can anonymously drop off notes of concern about their friends.

Over the last year, educators have put increasing focus on the mental, emotional and social health of students.

A dozen of Idaho’s past Teachers of the Year signed a letter Monday calling for the state to invest more heavily in mental health support and resources for schools. The teachers said that students and staff had been dealing with “the stresses of uncertainty, trauma and workload” since the coronavirus first forced schools to operate remotely.

“The pandemic has really pointed out the weaknesses in our schools…,” Discovery Elementary School Principal Ken Marlowe said in a February interview. “Our teachers and faculty should have the capacity to help with social-emotional learning, but it needs to get down to the students. It’s going to be a bit of a paradigm shift.”

Marlowe will play a key role in making that shift happen in Bonneville Joint School District 93. He presented about social-emotional learning to the school board in February, and over the next few years, he will be working with teachers and counselors to roll out those approaches to working with students throughout the district.

In addition to being the principal at Discovery Elementary School, Marlowe is an actively licensed and practicing counselor in Idaho Falls. His wife works as a nurse manager at the Behavioral Health Center in Eastern Idaho Regional Medical Center.

Bonneville Superintendent Scott Woolstenhulme said the increased focus on social-emotional learning is one way the district is trying to address the “hyper-focus” on the academic aspects of schools at the expense of students’ emotional development. He said the program is equally intended for students with everyday concerns and larger mental health concerns.

“There is certainly concern for our kids that are really struggling, and we’ve taken steps over the years to be better with them. But we also have to help every kid develop the skills they need to be functioning members of society,” Woolstenhulme said.

While more students in general are seeking help, the district also has seen more severe ramifications of mental health crises. At least four District 93 high school students made suicide attempts in early February, according to Marlowe and other district employees. None succeeded.

Shawn LaPray, director of the Behavioral Health Center, said there had been a rise in both child and adult demands for their intensive services early this year. The center had expanded to 25 beds for adolescents in 2019 and, recently, the building has been filled to capacity with teenagers hospitalized for their own safety.

“We have seen a huge growing need for adult behavioral health care as well. The difference in adolescents is that the challenges they see today can seem even more insurmountable, because of their age and the gravity of the stressors they’re experiencing,” LaPray said.

Bonneville has specifically looked to the Chicago-based Collaborative for Academic, Social, and Emotional Learning (CASEL). The group is directly partnered with 20 school districts across the country on plans to integrate social and emotional learning into classrooms and has given resources to many others.

Marlowe spoke to an official from Austin School District in Texas about the official-partnership with CASEL, though the district will not follow that route.

“There are more students feeling isolated, withdrawn or anxious than they have ever seen. That goes from elementary-age kids up to the high schools,” Marlowe said.

The counselors at Hillcrest High School and other District 93 schools have three tiers of students they work with. Tier 1 is any student who comes to them with a concern, which could range from test anxiety to a problem at home.

If the counselors think the student needs to see them more frequently and get more dedicated help at school, the student is elevated to Tier 2. Students placed in Tier 3 are ones who need outside help, including outpatient or inpatient medical referrals from the counselors.

Hillcrest’s lead counselor Kathlene Parsons said the biggest change over the year has been a rise in visits from Tier 1 students. She said most of those referrals to see a school counselor come from other students, either directly from friends or with tips dropped off anonymously in the locker maintained by the school’s Hope Squad.

“They want to let an adult know their concerns because they care about their friends,” Parsons said.

The Hope Squad at Hillcrest was instrumental in organizing events for Random Acts of Kindness week earlier in February, which began at the high school and spread through several other eastern Idaho districts.

A recent study from the Centers for Disease Control and Prevention found that the suicide rate in Idaho dropped 14% between 2018 and 2019, the largest decline for any state in that time. Despite the decline, Idaho was still among the highest rates in the country that year and one expert told Boise State Public Radio that the trend could easily have reversed last year.

Over the fall, the Behavioral Health Center began expanding the number of people in the community who could directly admit students into the center to receive help. General practitioners and nurses were given options to refer children, as were school counselors.

LaPray said it was hard to “pinpoint one thing” that led to the recent high admission rates. While LaPray thought that continued isolation and having fewer social interactions played a role, he said that other potential reasons were unrelated to the coronavirus.

“We’re also seeing population growth in Idaho, especially around here, and mental health is becoming less and less stigmatized. I don’t know how much this demand will go away as things get back to normal,” LaPray said.

{p dir=”ltr”}If you or someone you know is considering suicide, please contact one of these numbers: