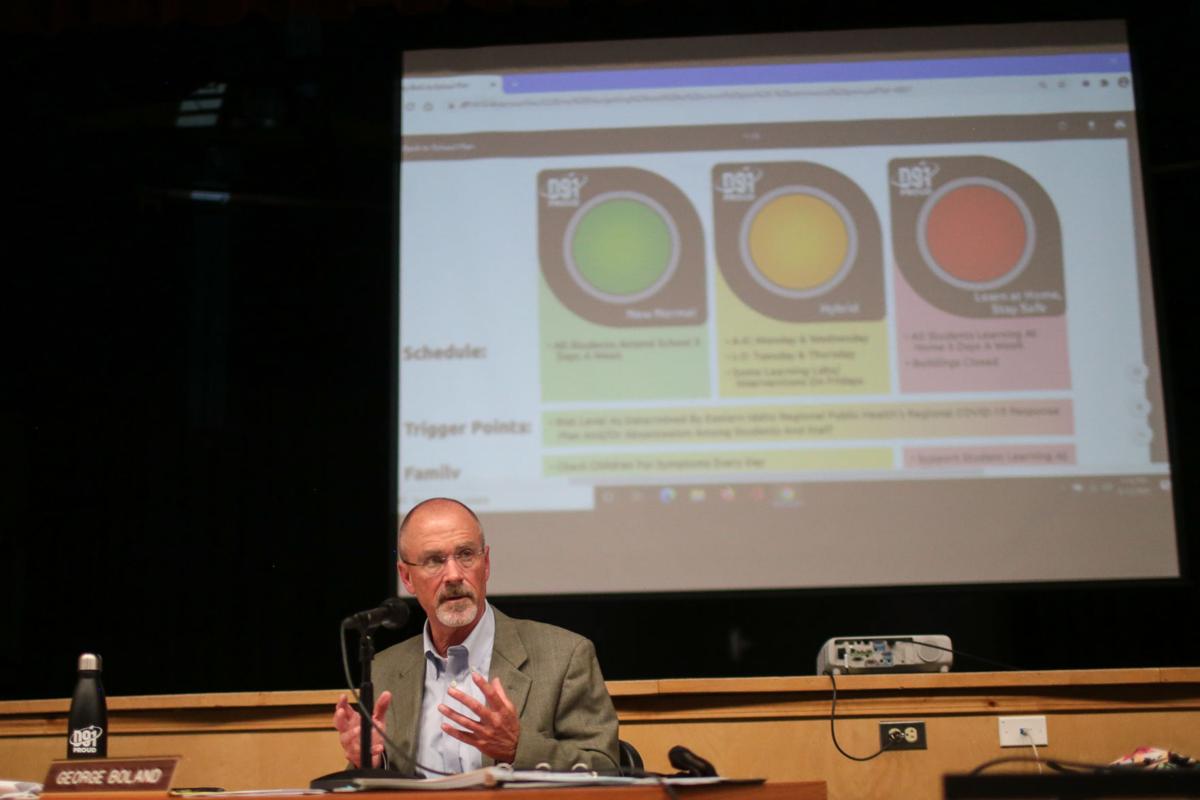 Superintendent George Boland fields a question during a District 91 school board meeting discussing opening schools during the coronavirus pandemic held at Compass Academy on Wednesday, August 12, 2020. 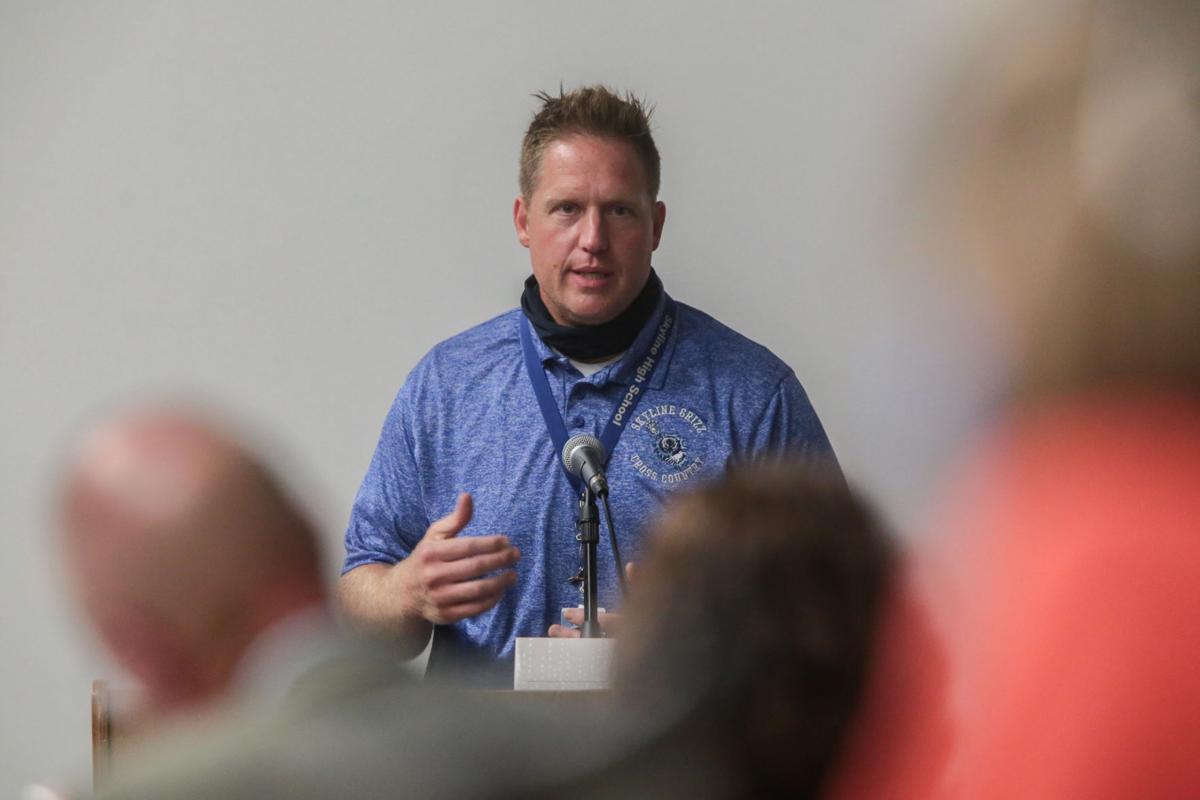 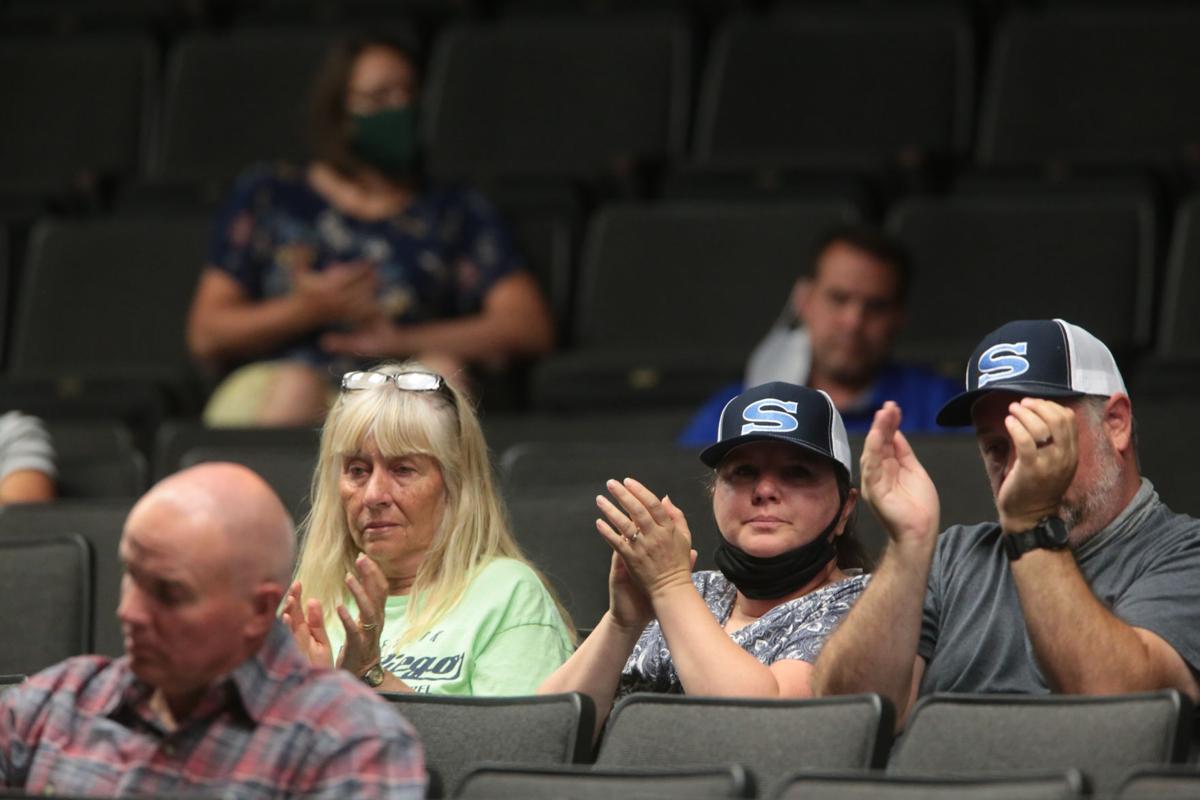 Audience members applaud during a public input session held by District 91 to hear what residents think about opening schools during the coronavirus pandemic held at Compass Academy on Wednesday, August 12, 2020.

Superintendent George Boland fields a question during a District 91 school board meeting discussing opening schools during the coronavirus pandemic held at Compass Academy on Wednesday, August 12, 2020.

Audience members applaud during a public input session held by District 91 to hear what residents think about opening schools during the coronavirus pandemic held at Compass Academy on Wednesday, August 12, 2020.

After five hours of public input and trustee discussion, the Idaho Falls School District 91 board has approved a plan for fall classes during its Wednesday night meeting.

Students will be in school four days a week when classes begin on Aug. 26, barring a major change in the active case numbers in Bonneville County. Masks will be used in classrooms at the discretion of teachers and expected throughout the rest of the school day. Fall sports are expected to take place as well.

The four-days-a-week approach had not been part of the district’s initial three-phase plan that was first announced in July. Board member Paul Haacke spearheaded the push to create the new designation during the school board meeting, which goes in between the “green” plan for five days of school a week and the “yellow” plan to alternate days between in-person classes and online classes.

Haacke proposed the “lima bean green” option because he felt the current situation in Idaho Falls did not warrant starting the year with students physically attending school just two days a week. He said that having Fridays for online classes and teacher development would help prepare the district for possible remote classes, but that it was important for kids to return to normal schooling as much as possible.

The four days a week approach is expected to be in place for the first six weeks of the fall trimester, though the board could move to either the green or yellow phase as the active case numbers change in Bonneville County.

Masks will be expected for students on buses, in school hallways and other potentially crowded areas during the school day. When it came to classrooms, board discussion was split between allowing teachers and students to choose when to wear masks.

Haacke wanted to give students the ability to remove their masks during class and questioned how a broader requirement would be enforced. Superintendent George Boland and other board members pushed for teacher control, especially given how many classes would be unable to enforce social distancing while schools are at full capacity.

“Kids are living in a world of uncertainty right now. The one certainty that we can stick with is that the teacher is the authority in the classrooms, and you do what the teacher tells you to do,” Boland said.

Numbers provided by the Idaho Falls Education Association indicated that most teachers want more control over mask use at schools. IFEA President Angela Gillman shared results from a survey of teachers in the association, where more than 80% who responded wanted the ability to require masks for their classroom.

Other survey results from the IFEA indicated some widespread concern about the district’s plan heading into the Wednesday night meeting. More than 75% of teachers said they had strong or very strong concerns about the current reopening plan. In addition to the desire for widespread mask use, 46% of teachers surveyed said the two days provided by District 91 wasn’t enough time to prepare their classrooms.

“Every teacher wants to return to the classroom, but teachers are afraid. The price and risk for returning to school has never been this high,” Gillman said.

The language of the fall plan has also been revised to tie the district less directly to the active case numbers reported by Eastern Idaho Public Health. Haacke said that while the numbers are an important tool for making those decisions, he didn’t want outbreaks at prisons or assisted living facilities to control what happened to schools.

“It automatically bumps us into the next category, and all I’m asking is let’s control our plan. ... Let’s understand why the number is at 120 or 200 so we can make the decision for our kids,” Haacke said.

EIPH currently has the authority to close schools or issue limits on gathering size that would prevent schools from operating normally. A state legislature working group called for taking that ability away from public health districts on Monday, in advance of a special legislative session being held later this month. The special session could not address the issue until January unless Gov. Brad Little adds it as a special session topic.

Early numbers provided by Boland showed the newly launched D91 Online Academy could have a large enrollment of students this fall. More than 450 students had enrolled in the virtual classes by the beginning of the Wednesday night meeting. Boland said the district did not plan to cap the enrollment for the online school but said that finding teaches could be an issue at a certain point.

Board members also voted to approve holding sports and other programs covered by the Idaho High School Activities Association. All districts need to approve an IHSAA plan, including precautions for mask use and quarantining taken by each team, in order to compete in those events during the fall. Any clubs and activities not covered by the IHSAA will be on hold for the start of the fall trimester.

Before voting on the fall reopening plan Wednesday night, the Idaho Falls School District 91 board heard 90 minutes of comment from parents, s…