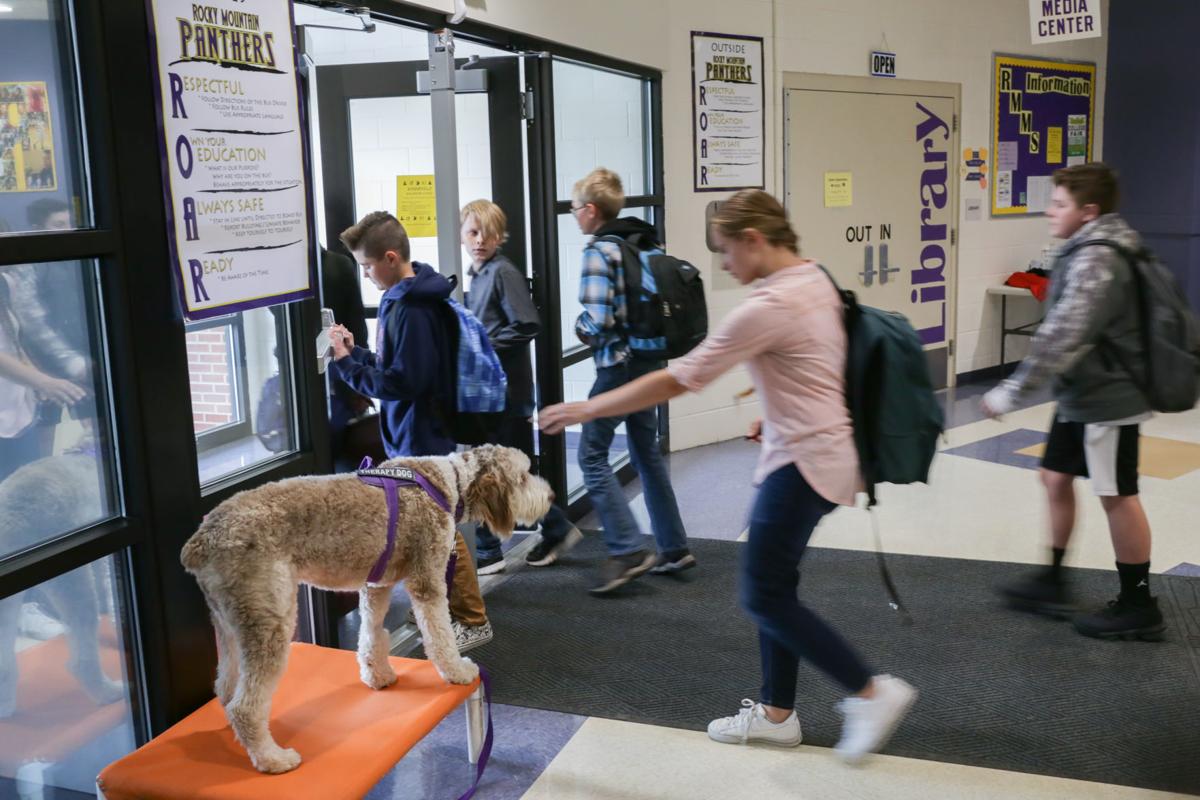 Students stop to pet Annie, a nine-month-old Aussiedoodle, as they leave school for the day at Rocky Mountain Middle School in Idaho Falls. Laurel Trimble, the school secretary, purchased Annie for the school. 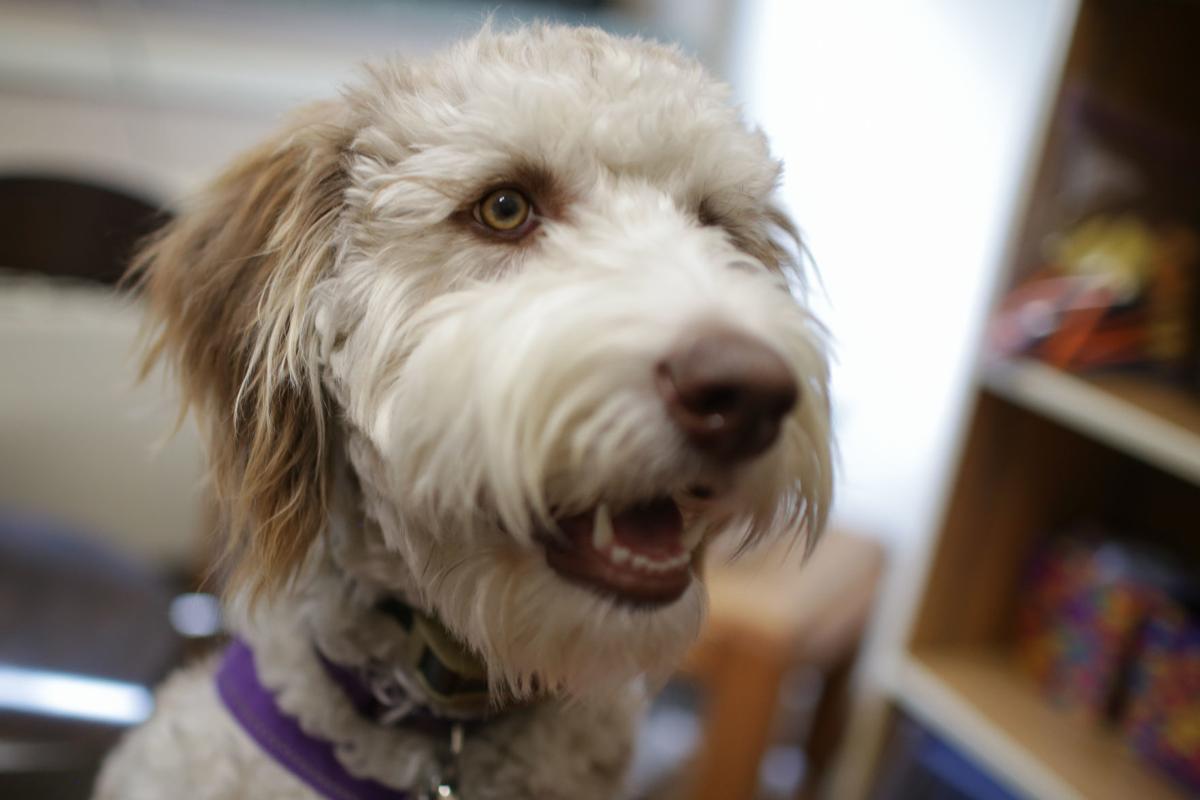 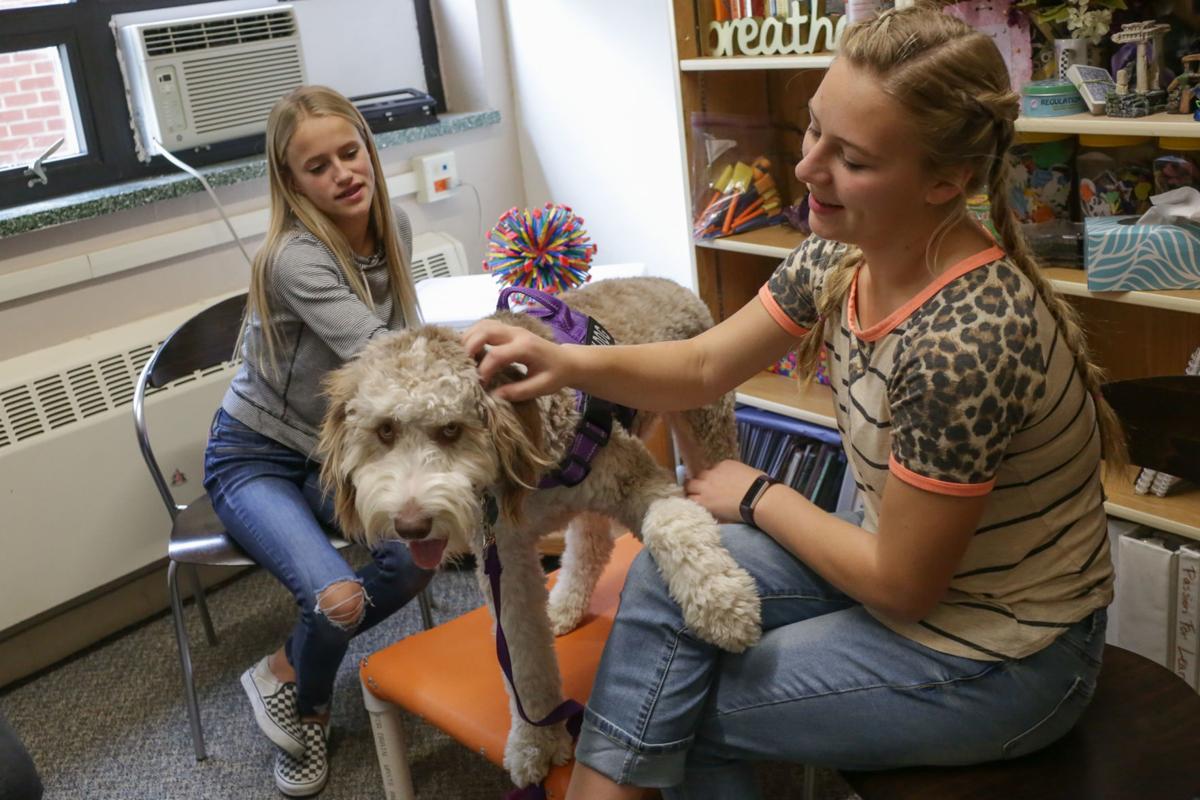 Students stop to pet Annie, a nine-month-old Aussiedoodle, as they leave school for the day at Rocky Mountain Middle School in Idaho Falls. Laurel Trimble, the school secretary, purchased Annie for the school.

As students file out of Rocky Mountain Middle School at the end of the school day, many stop by a small orange platform by the main doors. Resting on top of the platform is a large curly-haired dog, who sits patiently as the students pet her and hug her on their way home.

Annie is a nine-month-old Aussiedoodle (half Australian Shepherd and half poodle) and is the first therapy dog to be brought into a school in Bonneville Joint School District 93. In the two months since she began working, Annie’s reception has been so positive that the school board is considering a new policy to make it easier for other schools to bring in dogs of their own.

Annie is owned by Laurel Trimble, the middle school’s longtime secretary. Trimble said she started thinking about retiring in the next few years and wanted to leave something behind for the school.

After talking with school administrators and researching the benefits of service dogs, she devoted the last year to training and preparing Annie.

“I couldn’t have anything mess up with Annie as the pilot program because if it did, that would close the door for all our other schools. And it’s been amazing so far,” Trimble said.

Trimble adopted Annie from the Harrigfeld family, whose daughter Klair is in eighth grade at Rocky Mountain, and set about preparing her to become a therapy dog. Unlike service dogs, which are trained to do specific tasks for their owner and ignore distractions as much as possible, therapy dogs serve a more general purpose.

“A therapy dog can’t be paying attention to the owner at all. It’s all about being sociable and paying attention to everyone else they see,” said Coby Vornovich, Annie’s current trainer at Idaho K9 Academy, which is part of the Snake River Animal Shelter.

Trimble brings Annie to school three days a week, where she stays on her bed in the attendance office in between counseling sessions and on-site training lessons on Wednesdays. In October, Annie received the Canine Good Citizen Certification from the American Kennel Club, the group’s official designation for dogs who have been successfully trained.

Eighth-grade counselor Nikie Bone said that having Annie attend some of her sessions has been especially helpful for the students who are nonverbal or reluctant to open up. Annie is trained to put her paw on students’ legs if they appear anxious and to lick them if they put their hands over their faces.

“Spending 15 minutes here with Annie is accomplishing as much for these kids as an hourlong session used to,” Bone said.

Sage Hansen, 13, sees Annie in the mornings when she comes through the attendance office and again on her way out after school. She said Annie is much better behaved than her family’s dog.

“She is always so nice to people and she wants to make everyone smile,” Sage said.

The school board voted during its October meeting in favor of a new policy that outlines the standards future therapy dogs would have to meet to be used in the district. Additional therapy dogs must have the same level of certification as Annie, be well-kept and harnessed at all times and not interfere with classes.

Two other schools in District 93, including Thunder Ridge High School, already have reached out to Trimble to ask about the training process.

Laurel Trimble purchased Annie, a nine-month-old aussie doodle, for the school after reading research about the stress relief that animals at …