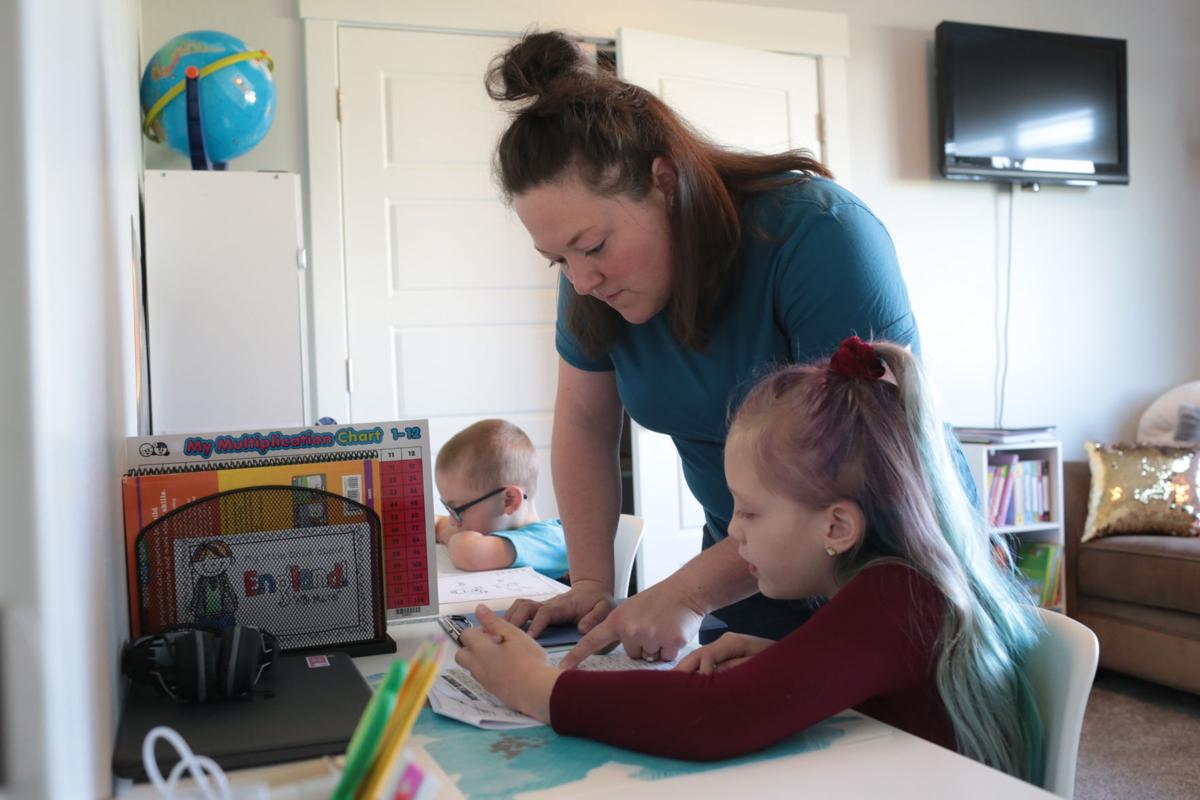 Jerica Stacey helps Addy Stacey with her math work at their home on Monday, Sept. 21, 2020. The Stacey’s decided to homeschool their kids to have stability in case there were outbreaks of coronavirus at the kid’s respective schools. 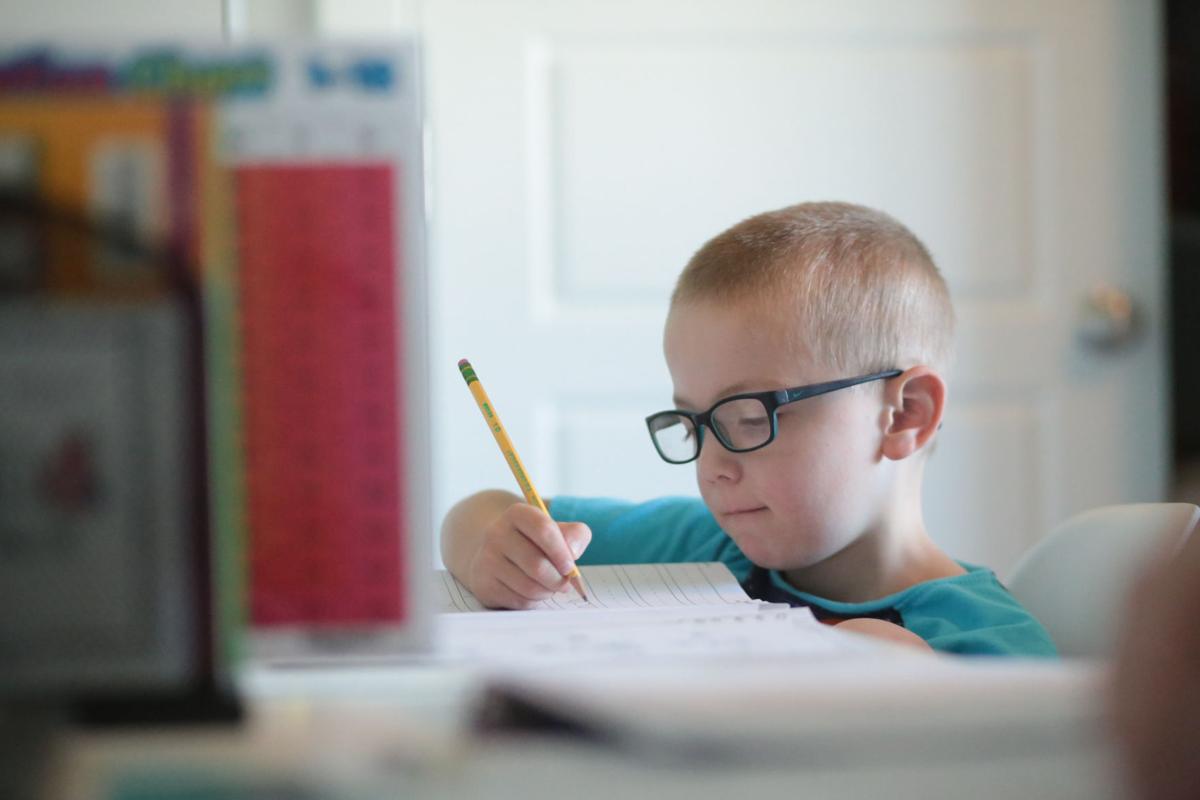 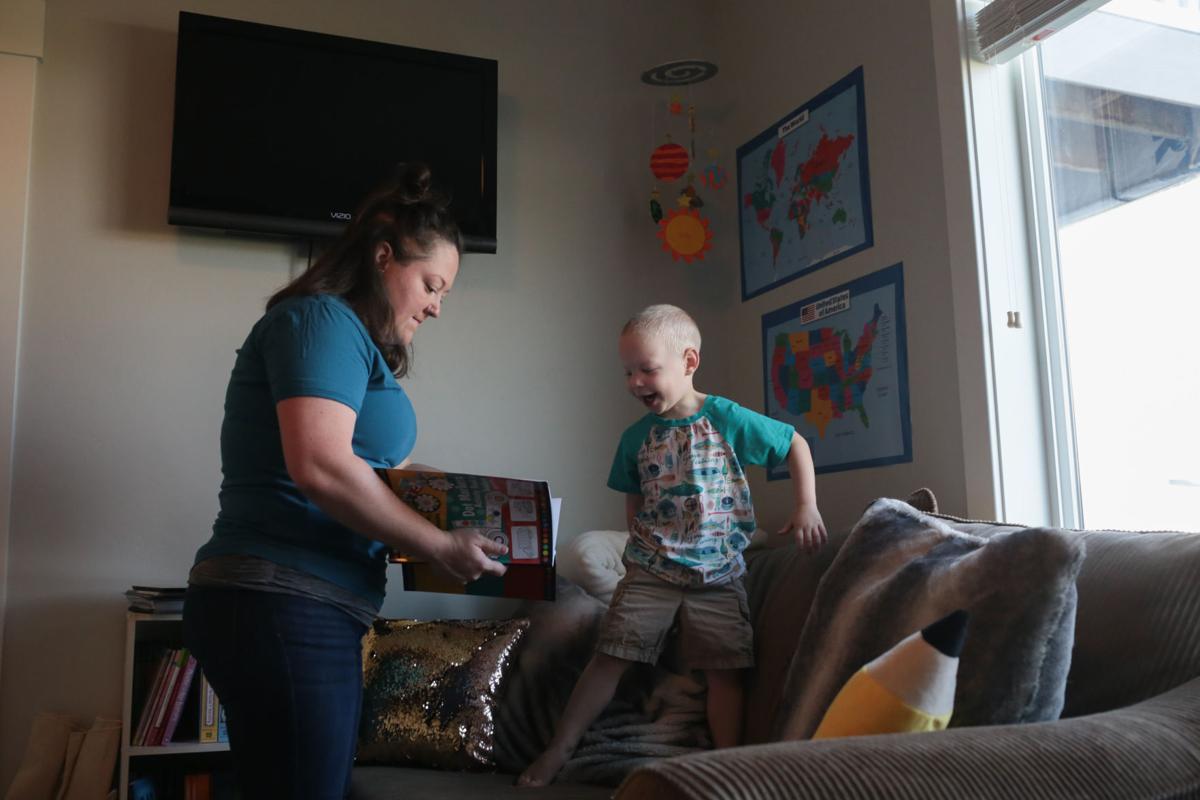 Jerica Stacey helps her son Reid pick out a picture to color while homeschooling on Monday, Sept. 21, 2020. 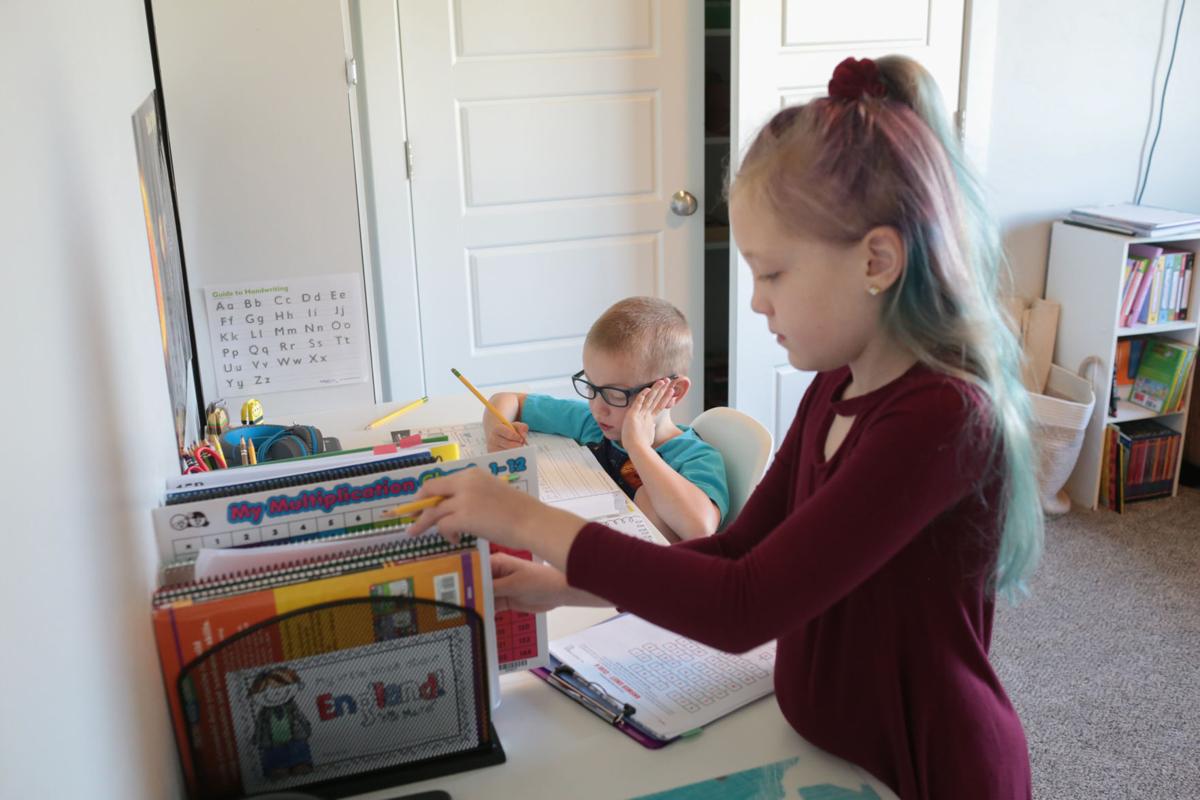 Leo Stacey does his English work while Addy Stacey puts away a finished math assignment at their home on Monday, Sept. 21, 2020. 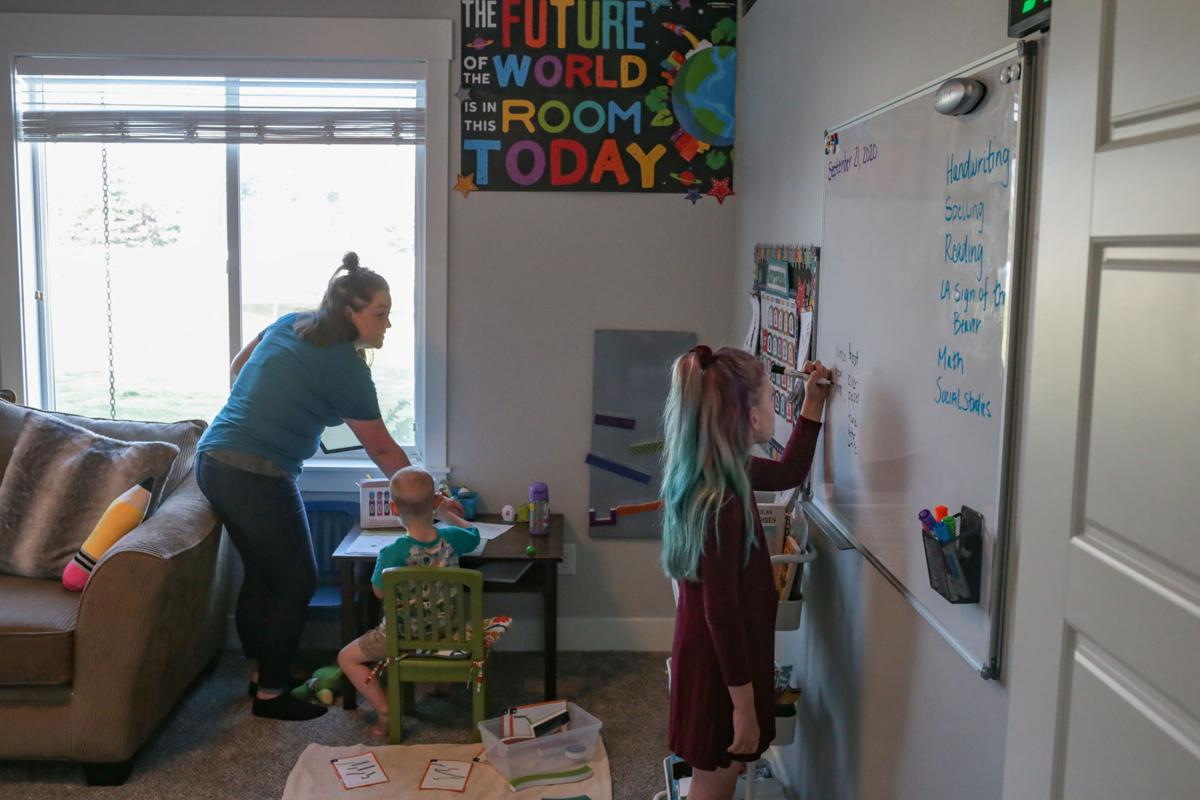 Jerica Stacey helps her son Reid with his coloring as Addy Stacey does her spelling assignmet at their home on Monday, Sept. 21, 2020.

Jerica Stacey helps Addy Stacey with her math work at their home on Monday, Sept. 21, 2020. The Stacey’s decided to homeschool their kids to have stability in case there were outbreaks of coronavirus at the kid’s respective schools.

Jerica Stacey helps her son Reid pick out a picture to color while homeschooling on Monday, Sept. 21, 2020.

Leo Stacey does his English work while Addy Stacey puts away a finished math assignment at their home on Monday, Sept. 21, 2020.

Jerica Stacey helps her son Reid with his coloring as Addy Stacey does her spelling assignmet at their home on Monday, Sept. 21, 2020.

School in the Stacey house has settled into a morning routine.

From 9 a.m. to 12 p.m., Jerica Stacey works with her two elementary-age children and a preschooler. She tries to find science experiments and books that work equally well for her third-grade daughter Addy and her two younger sons Leo and Reid.

While the coursework matches up closely with what is covered in Bonneville Joint School District 93, the Stacey’s are not enrolled in the district this year. Stacey decided to home-school her children this fall, which she said was less about the worries of them catching the coronavirus than the instability that could come with school closures and quarantines.

“A lot of it was the mental stress of having to worry about whether they would get the virus or get sent home because they sat next to someone who had it,” Stacey said.

This fall has seen thousands of kids in eastern Idaho pulling out of in-person public school. Many families chose to embrace online school options, while others decided to cut ties with the district almost fully and teach their children themselves.

Idaho does not regulate home-schooling or require families to tell the state if they are pursuing it, making exact numbers difficult to come by. Michelle Clement Taylor mostly goes off the number of phone calls that have come to her office as the State Department of Education’s school choice coordinator.

Taylor said she has gone from getting one or two calls a week from families asking about teaching children at home to four calls a day. Her office can help them contact their school to withdraw or list off available online programs, but she said they try to avoid specific recommendations for how families should handle schooling.

“I would say at least half have said they’re looking at this for a temporary thing. They’re going back either once school opens again for all-day classes or once there’s a vaccine. But some may find that whatever option they choose helps their children thrive,” Taylor said.

When Thomas Kennedy took over as principal of Bonneville Online Elementary School early in the summer, he tried to call every family who had shown interest in online or remote schooling over the summer to see what the demand for those programs looked like. He estimated that at least 100 students had chosen to home-school this year, while hundreds more were planning to enroll in the online school.

“The number one thing we heard from all our families was that they love the neighborhood school but felt that, given the circumstances, this was the best thing to do,” Kennedy said.

He said that families chose to go with those options for a variety of reasons, with some worried there weren’t enough safety measures in place for students and others unwilling to go along with a mask mandate.

”I have to bring her home”

The Anderson family’s decision to keep their daughter home from Madison High School came after classes had started. Mother Kristine Anderson has lupus, putting her at higher risk for complications and serious illness if she gets the coronavirus, but she was fine with having her daughter Eliza return to high school as long as she agreed to wear a mask to help protect herself and the family.

Anderson said Eliza had agreed and followed that request for the first few weeks of school, even as fewer and fewer other students and teachers wore masks of their own. The final straw came when she was sent home for wearing shorts that school staff felt were inappropriately short.

Anderson tweeted about her frustration that the school was willing to enforce that section of its dress code but could not create a mask requirement, a complaint that went viral and gathered tens of thousands of likes and retweets last week.

“I know it’s better for her and her learning to be in school but because the district isn’t willing to create that safe environment, I have to bring her home,” Anderson said.

District 93 is one of four school districts in the region that continues working directly with home-schooling families. The district has a partnership with Overture Learning, a local company that helps supply curriculum materials to home-school families and connects them with professional teachers if they need help organizing lessons.

Overture director and founder Jen Goostrey said most of the families she’d worked with since starting the company in 2017 had been home-schooling before and joined to get stronger support from a school district. That was not the case for the majority of the new families who have signed up with the company in the last few months.

“A lot of those families are starting from scratch. They don’t have any of the technology or curriculum in their home when the school year starts,” Goostrey said.

Stacey and other Overture parents faced delays in getting material to teach their children because of the increased demand. Bonneville had also filled its available slots with Overture before the Stacey’s applied, so the family is technically enrolled through the Oneida School District.

Despite the rocky start, Stacey said the delays with getting supplies had been a blessing in disguise because the slow rollout had given her time to figure out what worked best for her family.

“We become so reliant on teachers to understand the needs of our kids that we don’t fully understand their capabilities. So it took us two, three weeks to really dial in that curriculum and what level everything they learn should be at,” Stacey said.