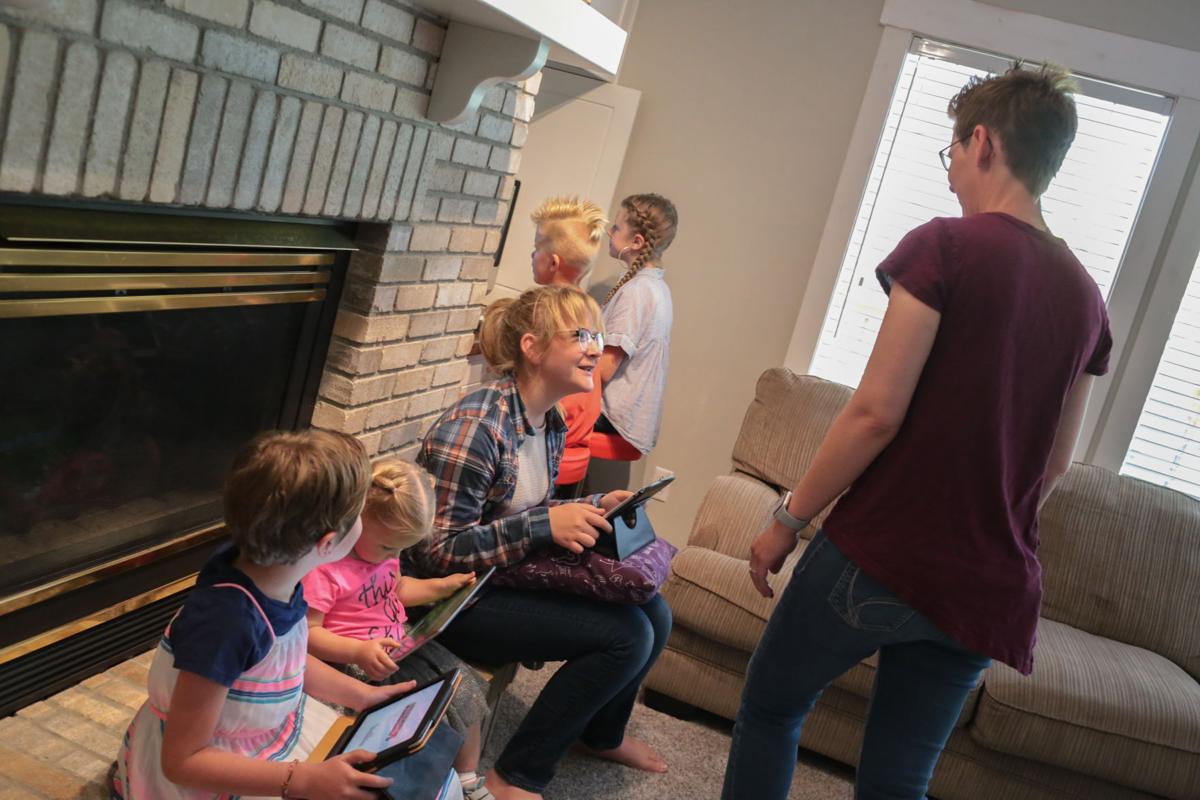 Grace, center, and Jamie Braithwaite, right, joke at their home on Friday, July 31, 2020. Grace Braithwaite, 15, who is immunocompromised says she wishes she’d be able to attend classes in person during her first year in high school but is also afraid of contracting COVID-19. 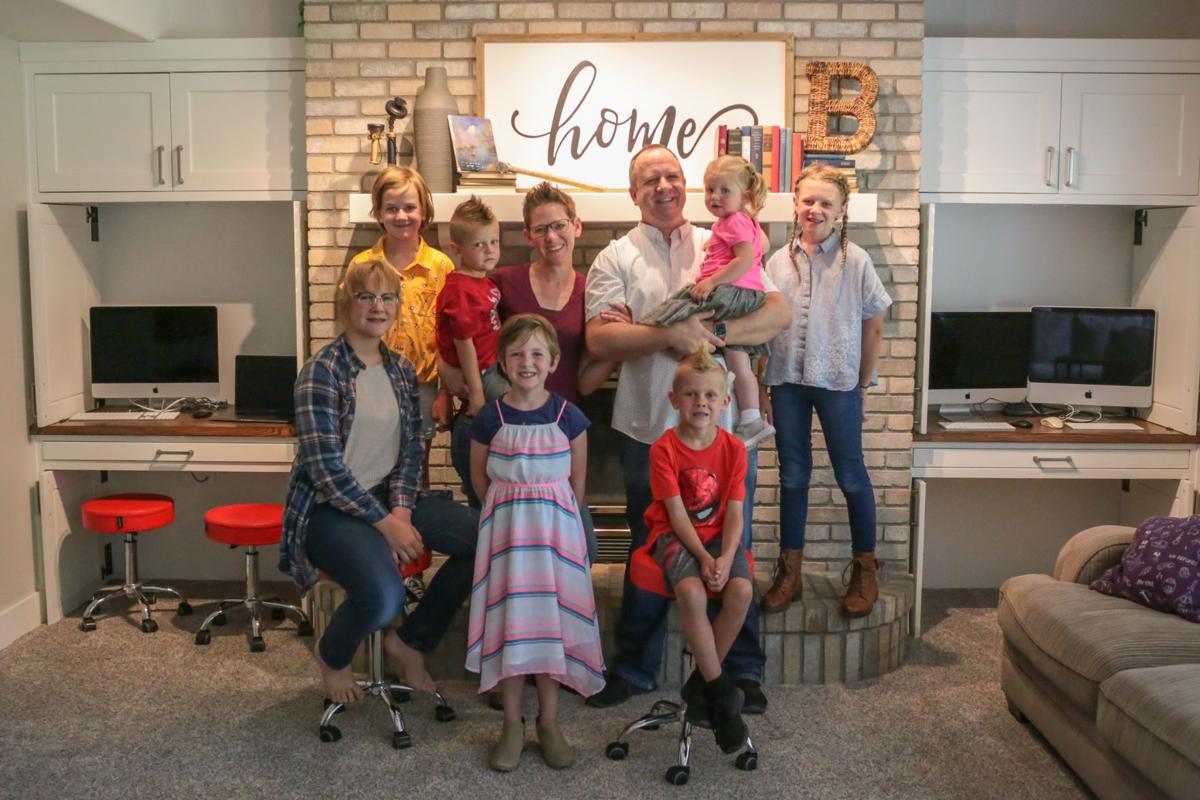 The Braithwaite family poses for a photo at their home on Friday, July 31, 2020. The Braithwaites' school-age children will be taking classes online through White Pine Charter School's online schooling option.

Grace, center, and Jamie Braithwaite, right, joke at their home on Friday, July 31, 2020. Grace Braithwaite, 15, who is immunocompromised says she wishes she’d be able to attend classes in person during her first year in high school but is also afraid of contracting COVID-19.

The Braithwaite family poses for a photo at their home on Friday, July 31, 2020. The Braithwaites' school-age children will be taking classes online through White Pine Charter School's online schooling option.

Jamie and Garth Braithwaite wanted their family to stay with Idaho Falls School District 91 as long as they could. They had five school-age children, ranging from first to ninth grade, who were enrolled in the district for the upcoming school year. Last spring, Jamie was selected as the next PTO president from Sunnyside Elementary School .

As the new school year approached, the Braithwaites reconsidered having their children continue in physical classes. One of their daughters had health concerns, which left her at higher risk from the coronavirus pandemic. Their experience with the switch to remote learning this spring left them unconvinced that a school without a track record of online classes would be able to provide a good at-home education.

District 91 officials announced they were working on an online school earlier this summer, but as the end of July came without updates the Braithwaites began looking for other options. When White Pine Charter School officials announced Wednesday that they were partnering with a statewide online charter school, Gem Prep Online, the Braithwaites decided to make the switch.

While the majority of schools in eastern Idaho are planning to keep going with in-person classes as much as possible, several districts and charter schools have rolled out new online options this summer. Boise School District opened applications for its new virtual school earlier this month, Jefferson Joint School District 251 and White Pine Charter School recently announced their new online teaching options and District 91 plans to open its online academy early next week.

District 251 announced Thursday that Rigby Virtual Academy was open for enrollments for the upcoming school year for families who don’t want their children to attend in-person classes, whether due to the coronavirus or other concerns. The classes will be taught with regular live video calls to allow students to interact with each other and their teachers.

“I believe that face-to-face and blended models for learning are the best way to deliver an education, but there are many people where that’s not an option for whatever reason. Our goal is to provide as close to that experience as we can,” Rigby Virtual Academy Principal Levi Jaynes said.

The virtual academy can be used for all the classes that a student is taking, or for select electives and courses that wouldn’t otherwise fit into their schedule. Elementary and middle school students will be able to enroll directly into the virtual academy, while older students will technically enroll at Rigby High School but take classes through the online platform.

The online school for District 91 will be run through a partnership with an online school program that has been running for several years. District spokeswoman Margaret Wimborne said the final details of the arrangement are still being finalized but that families should be able to enroll for a K-12 curriculum beginning sometime in early August.

“Online education is very challenging, and we think it makes more sense to try and partner with established entities that have a good track record so we can provide a good service to our families,” Wimborne said.

White Pine Charter School hired Joy Lea earlier this summer to serve as superintendent and principal liaison for the online charter, which will provide K-12 classes for current students at the charter school or other families in the area interested in an online program. Lea said that 11% of the school’s parents said they would prefer an all-online approach to classes for the upcoming school year.

Students who enroll in Gem Prep Online through White Pine will take online classes alongside other students from across Idaho. Lea said that Gem Prep’s focus on college preparation and advanced courses for students would be especially helpful for families who chose to continue with the online school for multiple years.

“The difference with online is that sometimes you can move more rapidly though those state standards. It’s an advantage, especially if you have a high-achieving student who wants to learn at their own pace,” Lea said.

For the Braithwaites, the track record that Gem Prep Online came with helped convince them that it would be a good alternative for their family this year. Gem Prep Online has been fully accredited since 2004 and its high school students graduate at a 93 percent rate, according to its website. Jaime said her kids also appreciated that the school would have occasional in-person meetups that would be arranged by Lea to keep them in contact with nearby kids.

“There are neighborhood kids who are also doing White Pine Online and will be in the same class, so they’ll be able to see each other face-to-face virtually. We still want our kids to socialize and feel part of a community,” Braithwaite said.

Jaynes said enrollment in the Rigby Virtual Academy will help determine what classes will be available this fall and which teachers will be focusing on online courses. Parents are encouraged to register their kids for the virtual academy by Aug. 14.