A Boise lawyer filed another lawsuit Tuesday challenging the constitutionality of school fees in Idaho.

The suit, which was filed in the Fourth Judicial District in Ada County, is on behalf of two West Ada Joint School District 2 parents and their kindergarten-aged son. It is against the district, with every other school district and charter school listed as “putative defendants.”

Robert Huntley has filed numerous suits against school districts in Idaho based on the theory that charging fees to attend school violates the Idaho Constitution’s guarantee that the state must “establish and maintain a general, uniform, and thorough system of public, free common schools.” This latest one challenges the charging of kindergarten fees.

“The well-documented studies I have seen indicate elementary education in Idaho is being underfunded by about $700 million per year,” Huntley said in a news release announcing his latest suit. “In that regard, Idaho is becoming the ‘Mississippi of the West.’ To partially fill that gap, we estimate schools statewide have been assessing and collecting about $20 million per year in unconstitutional fees. School leaders should set an example to their students and patrons by respect for and honoring of the mandates of the Constitution.” 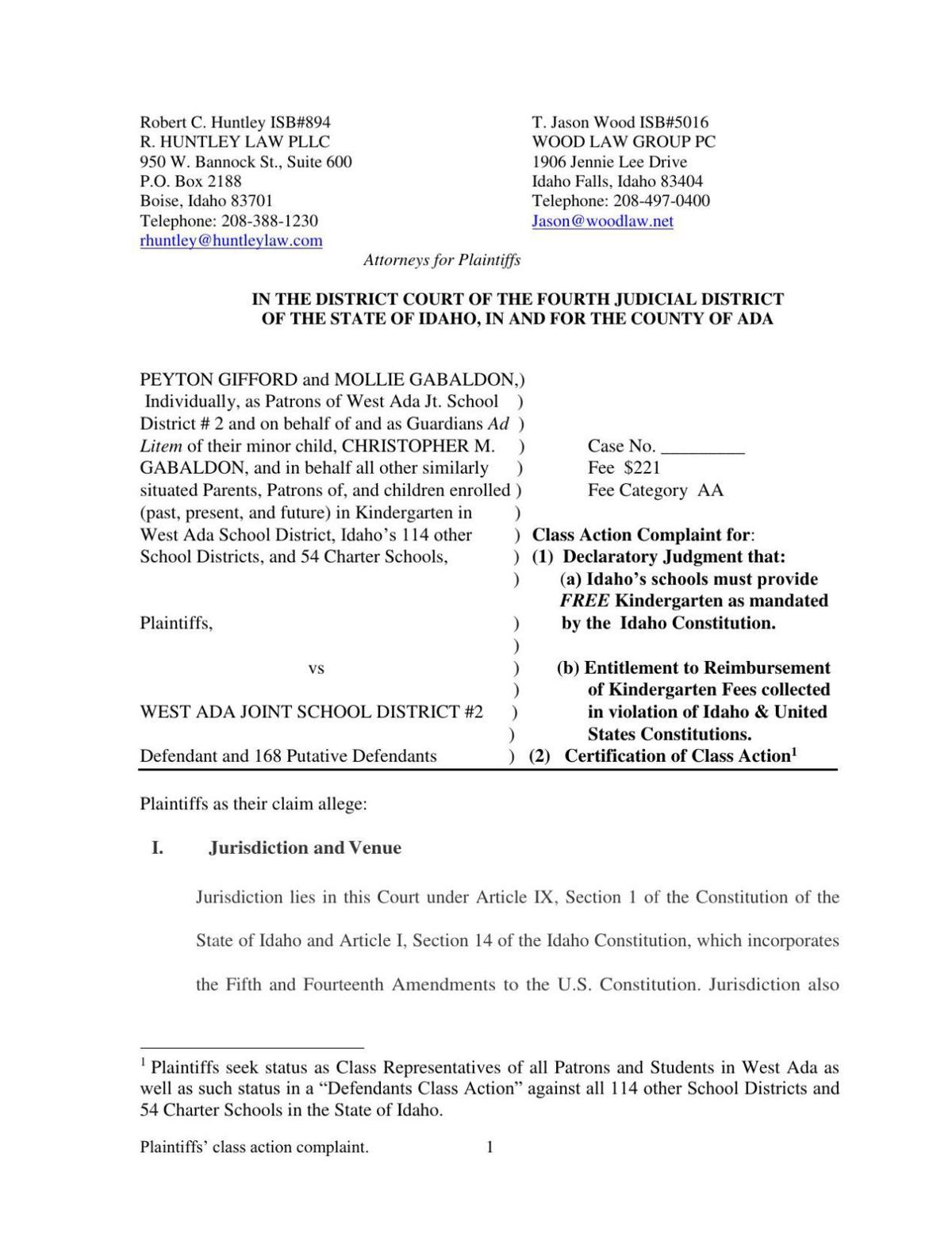 Huntley is a former state Supreme Court justice and Democratic politician who helped to enact the state’s sales tax in 1965 when he was a state House member representing Pocatello. He has said the tax was primarily meant to fund education and blames the proliferation of sales tax exemptions for the state’s education funding woes.

Huntley has been involved in school funding lawsuits for years, including representing a group of school districts in a 15-year-long lawsuit challenging the state’s funding levels from 1990 to 2005. He also represented the plaintiff in the 2012 case Joki v. State of Idaho, in which a court held West Ada had violated the state Constitution in charging fees for elective classes and for kindergarten.

Three school funding lawsuits in which Huntley is representing the plaintiffs challenging school fees are pending now. The case Zeyen v. Pocatello/Chubbuck School District is before the state Supreme Court now; the lawyers made their arguments before the court about two months ago and are awaiting a ruling. Two others — one in state court challenging the collection of registration fees and requiring parents to buy school supplies in Bonneville Joint School District 93, and a class action in federal court against every district in the state — are on hold waiting to see what the state Supreme Court does.

This latest suit, Huntley said, is restricted to the issue of kindergarten fees. While almost every school district in Idaho offers free half-day kindergarten, some districts charge tuition ranging from $250 to $300 a month for full-day kindergarten. The lawsuit argues this discriminates against low-income parents.

Idaho Falls School District 91 plans to launch an all-day kindergarten pilot program at Sunnyside Elementary School in August, charging $275 a month per student. The district had looked into the idea in 2018 as well but dropped it because there weren’t enough families willing to pay the tuition.