The Idaho Falls Education Association has come out in opposition to the new version of the school reopening plan that was approved Wednesday by the Idaho Falls School District 91 board of trustees.

The teachers union, which represents more than half of the 600 teachers in District 91 along with classified staff, released the statement late Thursday. They said the decision by the District 91 Board of Trustees to create a new phase ignored the work done by the district re-opening committees and prevented the teachers, parents and other stakeholders from providing input. 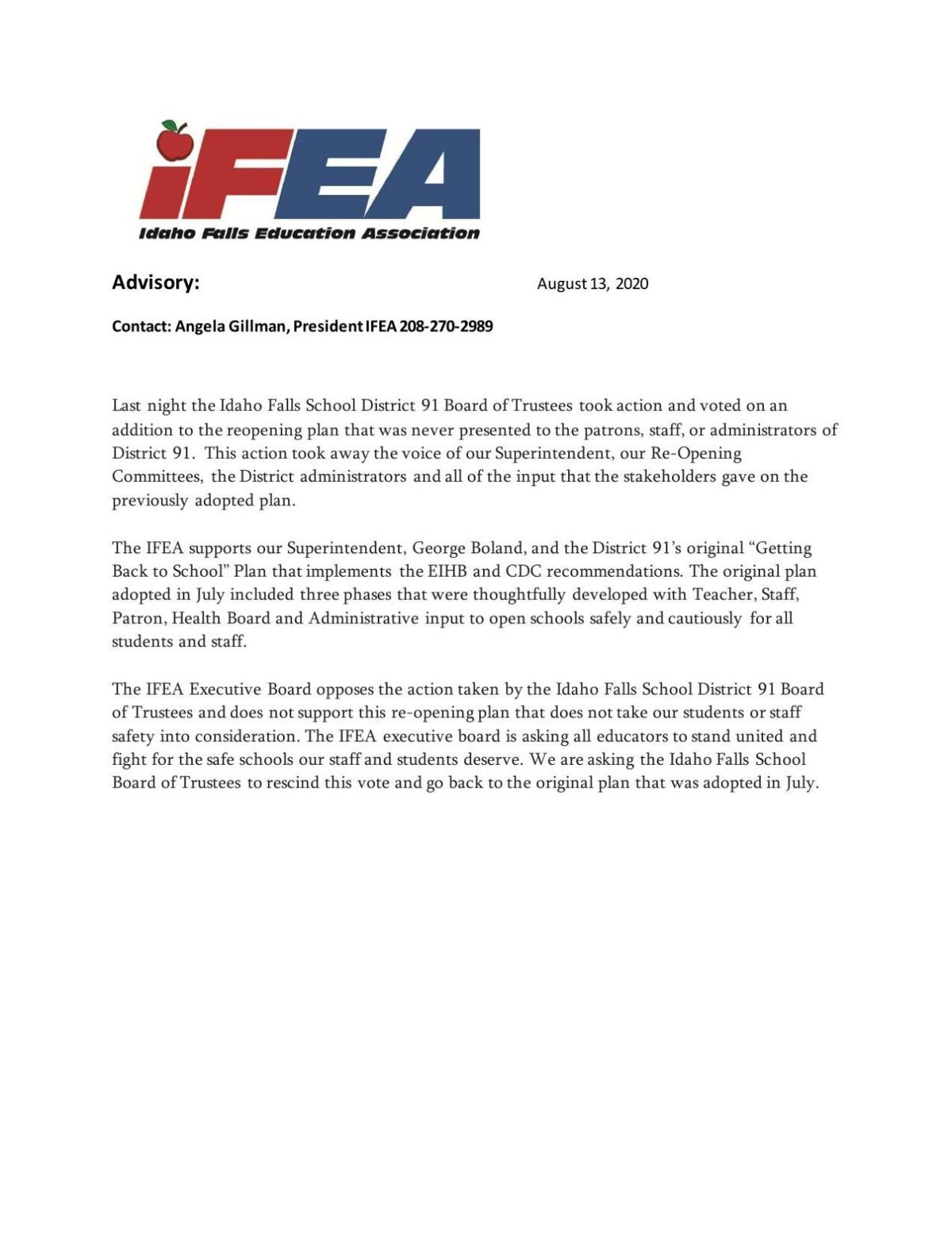 “The IFEA executive board is asking all educators to stand united and fight for the safe schools our staff and students deserve. We are asking the Idaho Falls School Board of Trustees to rescind this vote and go back to the original plan that was adopted in July,” the IFEA said in its statement.

The board and administration had previously announced a three-phase plan for school reopening that had been hammered out during workshops by the re-opening committees during the summer. The school board added a fourth phase and chose it as the preferred way to start the school year during Wednesday’s board meeting. The approved option will have students attending school four days a week with Fridays for online learning or staff development.

During the board meeting, IFEA President Angela Gillman shared teachers’ concerns about the reopening plan but said they would be there on the first day of school. Gillman said that guarantee was based on the phases that existed going into the meeting and the new approach left them with major concerns about student health and safety.

“We see schools across the country going from opening to absolutely closed, going right into the red zone. We don’t want that. We don’t want to teach online, we want to be with our kids and we need to make sure our staff is safe and our kids are kept safe,” Gillman said.

Aug. 26 will be the first day of school for K-9 students in District 91, with the remaining high schoolers beginning classes Aug. 27. Overturning the school board vote would likely leave the district in the “yellow” reopening phase with students attending school two days a week, either Monday-Wednesday or Tuesday-Thursday, and learning online for the remaining days.

When asked what the IFEA members would do if the board did not reconsider the current plan, Gillman said the IFEA “wasn’t going there” and were confident the board would change its mind.

After five hours of public input and trustee discussion, the Idaho Falls School District 91 board has approved a plan for fall classes during …