Five local legislative candidates have filed a complaint with the Idaho Secretary of State’s office alleging a group that is supporting their opponents has broken campaign finance rules.

Make Liberty Win, which is affiliated with and largely financially supported by the libertarian student activist group Young Americans for Liberty, has spent about $99,000 on mailers and phone calls supporting candidates in Idaho this primary season according to campaign finance reports, much of it in eastern Idaho. Specifically, locally the group has worked to support Reps. Bryan Zollinger, R-Idaho Falls, and Chad Christensen, R-Ammon, and legislative candidates Shane Ruebush, Ron Nate, Jud Miller and Jacob Householder, according to the reports currently on file, all of whom are the more right-wing candidates in a Republican primary with a more moderate one. Make Liberty Win has also sent out mailers supporting Marla Lawson and Rep. Dorothy Moon, R-Stanley, in their District 8 Republican legislative primaries.

The group did file a required disclosure with the state listing the people and groups who have contributed more than $500 to the group. However, it does not identify the individual supporters of Young Americans for Liberty or Grassroots Victory, two groups identified as donors to Make Liberty Win. 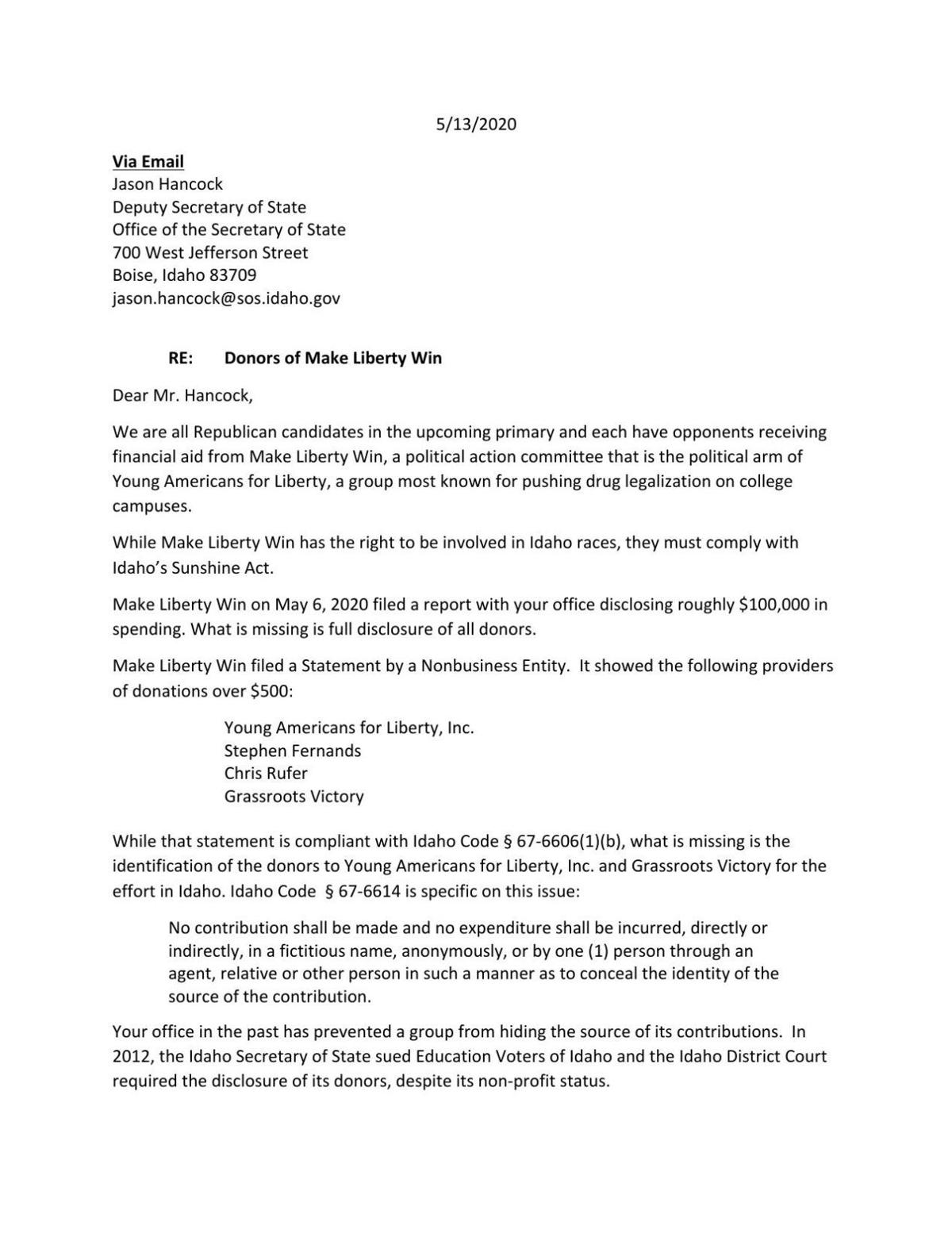 The complaint was filed by Rep. Britt Raybould, R-Rexburg, who is defending her seat from a primary challenge from Nate; Rep. Doug Ricks, R-Rexburg, who is trying to move up to the Senate and is running against Householder for the seat; Jon Weber, who is running against Ruebush for Ricks’ House seat; Marco Erickson, who is primarying Zollinger; and Dave Radford, who is primarying Christensen.

The complaint argues that Idaho law requires groups supporting a political campaign to identify their individual donors, pointing as precedent to a 2012 case that forced Education Voters of Idaho, a group that backed the so-called “Luna laws,” to disclose its donors.

“We ask your office to take the same stance here with respect to Make Liberty Win,” the complaint says. “It should be required to report the true source of all funds used on the Idaho effort, including actual donors to Young Americans for Liberty, Inc. and Grassroots Victory whose funds were channeled to the Make Liberty Win campaigns in Idaho.”

Make Liberty Win's executive director, Justin Greiss, said the group has numerous supporters in Idaho and is "100% compliant with all Idaho, state and federal laws."

"These incumbents and their lobbyist friends either don’t know the law or are just that desperate to distract from their own poor records," he said. "Make Liberty Win will continue to be a strong voice for the Constitution and will NOT back down as the establishment continues to advance the special interests of lobbyists in Boise. We expect these tactics from the regressive left, but it’s truly a shame to see folks who call themselves 'conservatives' attempt to stop free speech and free association when it doesn’t suit them."

Young Americans for Liberty was founded in the aftermath of Ron Paul’s 2008 presidential campaign and works to elect like-minded state legislators throughout the country.