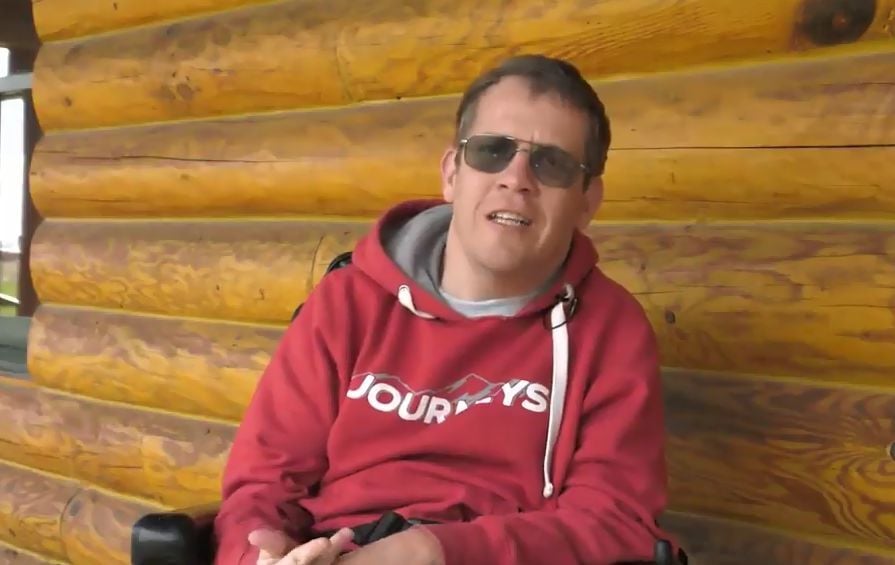 Kevin Swearingen speaks about his rights as an Idahoan with disabilities in a scene from “Blessings of Liberty.” 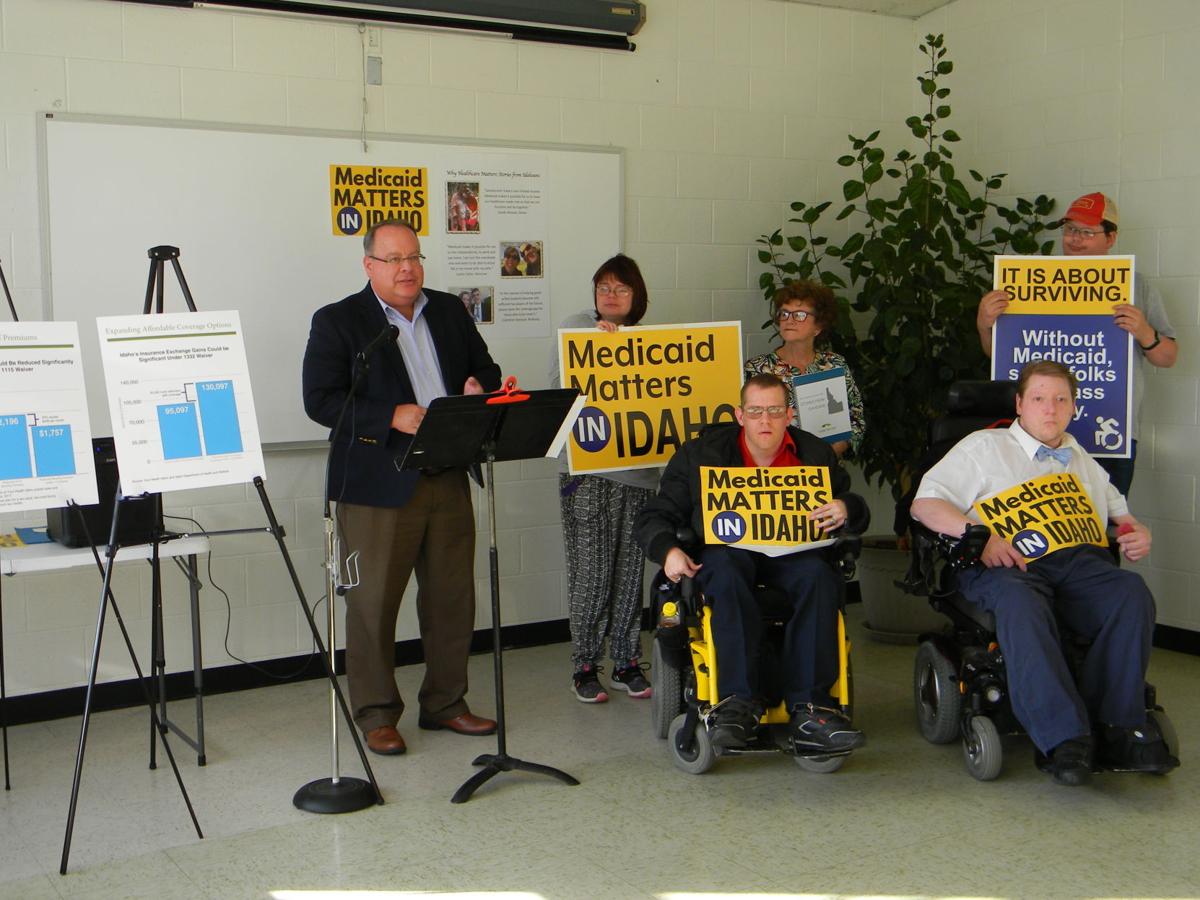 Brian Whitlock, president and CEO of the Idaho Hospital Association and a member of the statewide coalition Close the Gap, speaks during a press conference about the importance of Medicaid on Monday. He is pictured with Sandra Abend, back left, Debra Parsons, Robert Deidrich, Kevin Swearingen, front left, and Erick Yeary.

Kevin Swearingen speaks about his rights as an Idahoan with disabilities in a scene from “Blessings of Liberty.”

Brian Whitlock, president and CEO of the Idaho Hospital Association and a member of the statewide coalition Close the Gap, speaks during a press conference about the importance of Medicaid on Monday. He is pictured with Sandra Abend, back left, Debra Parsons, Robert Deidrich, Kevin Swearingen, front left, and Erick Yeary.

When he couldn't take trips with his usual group to town. When he couldn't receive his full regimen of physical therapy that he uses to manage his cerebral palsy symptoms, and without which he risks losing mobility. When, he said, "I couldn't go and do anything."

His care provider, Journeys Developmental Disability Agency, shut down for two months during the start of the state stay-home order. Providers like Journeys, part of states' Home and Community-based Services through Medicaid, help people with developmental disabilities, who sometimes don't drive.

Throughout the day, patients meet up at a community center with other patients, and workers drive patients through town to go grocery shopping and visit public venues.

At the end of the day, patients go home.

Advocates say these services, provided through state Medicaid programs, are a crucial alternative that expanded after states reformed disability services from the days when disabled people were largely institutionalized. The days of institutionalization were marked by widespread reports of horrifying abuse and neglect.

"What's happened across the country is people with disabilities want to live lives like typical lives," said Christine Pisani, executive director of the Idaho Council on Developmental Disabilities.

But some worry the future of these services are in limbo because federal funding talks to keep the care program afloat have stalled.

"When that's threatened, it's a big deal because no one wants to live an institution," Pisani said.

Congregate living facilities often have medically vulnerable people, who are at high risk for coronavirus complications. The more than 100 deaths in Idaho's long-term care facilities account for about half of all COVID-19 deaths in the state.

If no supplemental aid comes for the program, funds for disability services could be left to state legislators to handle when they wade through the state budget next year.

"We're talking about life and death here for many people," said Gary Sandusky, an advocate for disability rights in Idaho.

It remains to be seen what Idaho's budget next fiscal year, starting July 2021, will look like.

A state budget projection released Monday predicted revenues would only be slightly below what lawmakers allocated in the spring for this fiscal year, the Associated Press reported. But those projections depend on many economic factors, like how widespread the coronavirus is; new cases, hospitalizations and deaths have spiked throughout Idaho in recent weeks.

Any cuts in state funding to Medicaid would be greatly magnified. Every $3 the state spends on Medicaid is matched by about $7 in federal funding. Disability advocates worry that if the state budget is stretched, Home and Community-based Services could suffer sharp reductions without supplemental federal funding.

Both chambers of Congress remain deadlocked on coronavirus relief funds.

The House, which Democrats control, passed legislation months ago for coronavirus relief funds, dubbed the HEROES Act. The bill would increase federal funding for home and community-based services to soften any state budget cuts.

The Republican-led Senate didn't take up the legislation, instead drafting its own bill, the HEALS Act, that doesn't include similar increases in federal funding.

"We felt left behind. This is a community that's been completely forgotten in the HEALS Act," Pisani said.

Both Idaho Sens. Jim Risch and Mike Crapo voted for the Families First Coronavirus Response Act, which temporarily increased federal funds for state Medicaid programs in March; that bill passed in a 90-8 vote.

In response to a request for comment by the Post Register, Crapo said through a spokeswoman that he has "long supported home and community-based service providers and funding and will continue to do so to ensure that eligible Medicaid patients receive the coverage and health care they need."

"I remain committed to advancing legislation that will provide a number of resources to help the United States continue its fight against—and ultimately beat—the coronavirus pandemic. Americans need a robust health care system, safety measures for children in school, policies that will help get individuals back to work, and protections for business working in their best and honest efforts to keep workers and patrons safe."

State revenue outlooks aren't clear. The Idaho Constitution requires the Legislature to pass a balanced budget each year. When revenues began to fall this year, Gov. Brad Little asked all state agencies to spend 5% less than their allocated expenses. Come next fiscal year, Little is hopeful that move will pay off.

"Idaho is better positioned to weather this storm than most states," spokeswoman Marissa Morrison said. She said the increased federal funds for Medicaid allocated in March make the "impact on (Medicaid) service delivery to Idahoans ... minimally impacted relative to other states."

Department of Health and Welfare spokeswoman Niki Forbing-Orr said the department, which administers Medicaid programs, is "working in close coordination ... with the Governor's office to determine budget priorities."

Swearingen said his father, who typically cares for him when he's not at Journeys' facility, was recently diagnosed with cancer. Since the pandemic, his niece has been caring for him most days.

He uses a wheelchair, so he said he requires assistance with many tasks of daily life. Swearingen said his dad "says that it doesn't' bother him, which I know it doesn't, but it kind of helps me to know that he's getting a break from my needs to come here."

If budgets become tight and the program is cut he's worried he'll lose access to physical therapy, in-home assistance and a host of other services the program provides.

"I'm pleading with you, please take us into consideration. It's dire," Swearingen said in a Zoom interview last week. "People are worse off than I am, and I need it. But people are much, much, much, much more dire."