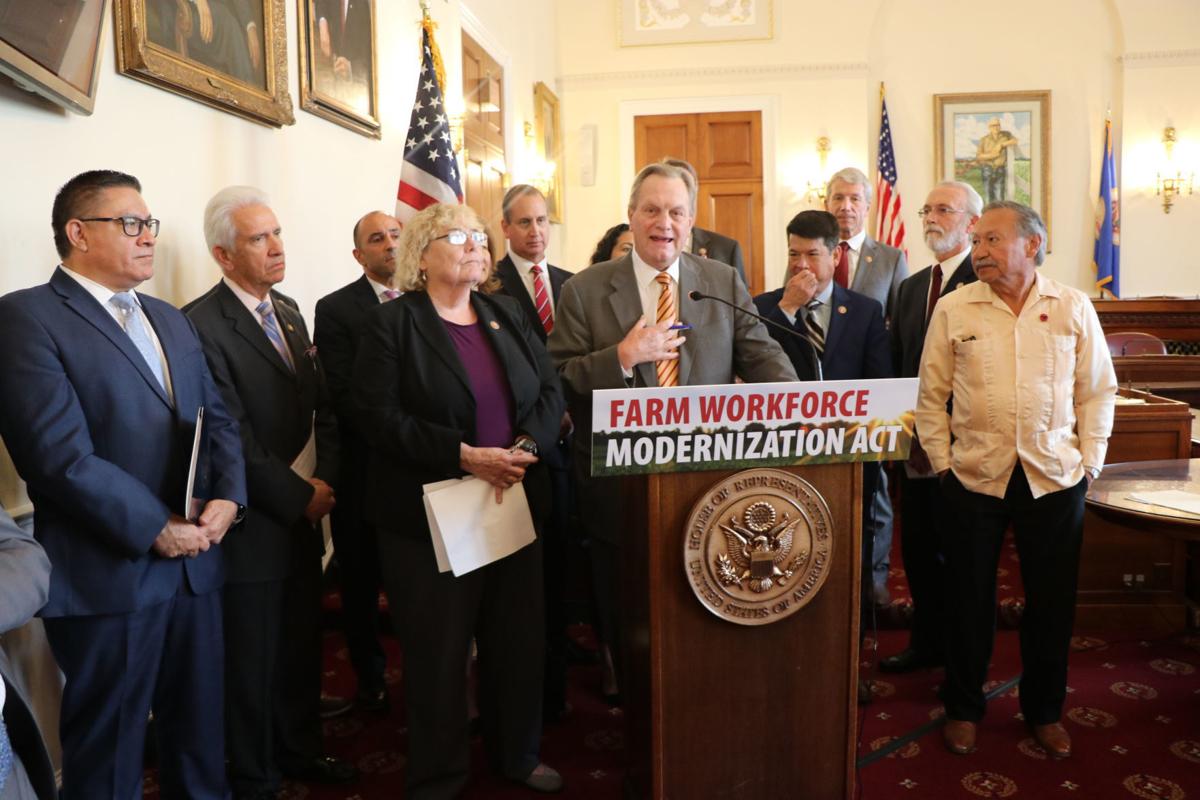 U.S. Rep. Mike Simpson, R-Idaho, speaks at a news conference in Washington on Oct. 30, unveiling a bipartisan bill to overhaul the farm worker visa system and let some undocumented immigrants working in agriculture get visas. 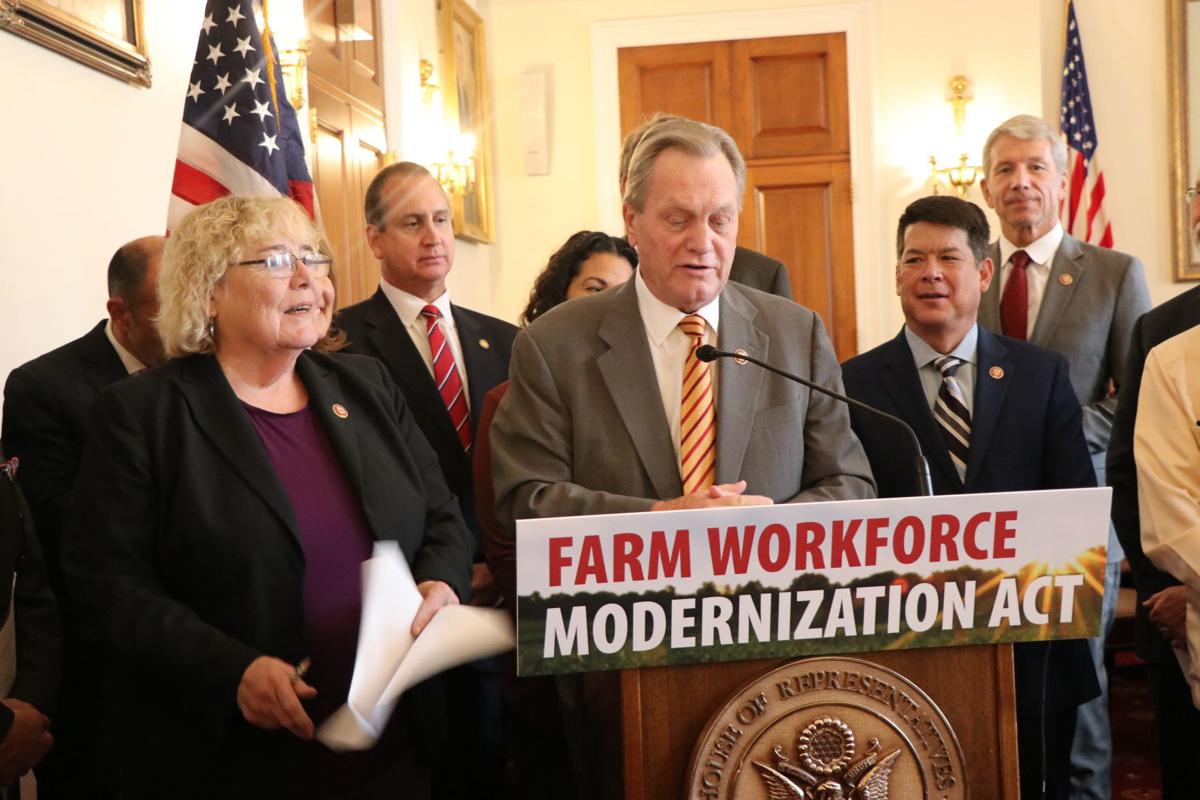 U.S. Rep. Mike Simpson, R-Idaho, speaks at a news conference in Washington on Oct. 30, 2019, unveiling a bipartisan bill to overhaul the farm worker visa system and let some undocumented immigrants working in agriculture get visas.

U.S. Rep. Mike Simpson, R-Idaho, speaks at a news conference in Washington on Oct. 30, unveiling a bipartisan bill to overhaul the farm worker visa system and let some undocumented immigrants working in agriculture get visas.

U.S. Rep. Mike Simpson, R-Idaho, speaks at a news conference in Washington on Oct. 30, 2019, unveiling a bipartisan bill to overhaul the farm worker visa system and let some undocumented immigrants working in agriculture get visas.

A bipartisan group of lawmakers has introduced a bill that would make it easier for American farmers to hire foreign workers and let some farmworkers who are here illegally now become legal residents.

U.S. Rep. Mike Simpson, the Republican who represents eastern Idaho in Congress, was part of the group involved in crafting the bill and spoke at a Wednesday press conference in Washington, D.C., unveiling the Farm Workforce Modernization Act. Simpson said he has had constituents asking him to fix America’s immigration system since he first entered Congress.

“Getting our farmers’ employees right with the law will provide economic stability to our rural communities and make our country safer by creating a legal agriculture immigration system that allows our valuable law enforcement resources to focus on the bad actors,” Simpson said. “Idaho farmers who work with immigrants know that they share our Idaho values: faith, family, hard work and freedom. We need to live up to our ideals and values, enforce our laws, and find a path forward that keeps Idaho agriculture, and the families who make Idaho agriculture the best in the world, as the driving force of our economy.”

The bill’s 44 House co-sponsors include 24 Democrats and 20 Republicans, and its supporters have said it is a bipartisan compromise. Rep. Zoe Lofgren, D-Calif., chairwoman of the Immigration and Citizenship subcommittee, is the bill’s main sponsor. The bill’s fate remains to be seen — Simpson told the Idaho Falls City Club earlier this month that he thinks it could pass the House, but McClatchy reported Monday, citing a “senior administration official,” that President Trump, who has made cracking down on illegal immigration a core part of his political message, is unlikely to back it. 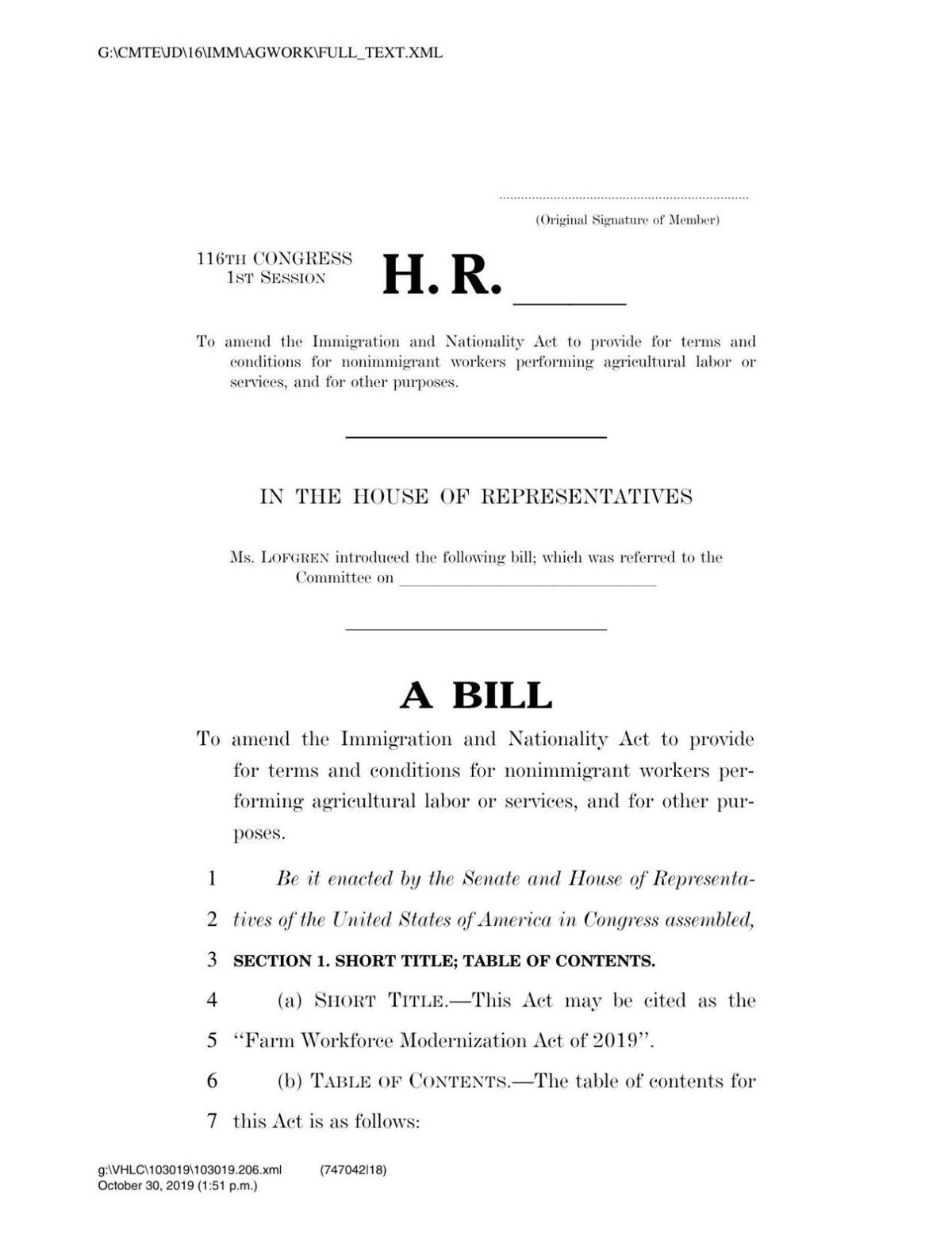 “The men and women who work America’s farms feed the nation,” Lofgren said in a statement. “But, farmworkers across the country are living and working with uncertainty and fear, contributing to the destabilization of farms across the nation. Our bill offers stability for American farms by providing a path to legal status for farm workers.”

According to a fact sheet summarizing the bill, it would let people who can demonstrate at least 180 days of agricultural employment and can pass a background check get five-year renewable work visas. People who have worked in agriculture for more than 10 years could apply for lawful permanent residence after four more years of work, and people who have for fewer than 10 years could do so after eight years of work. They would have to pay a $1,000 fine to do so.

The bill also would make changes to the existing H-2A visa program, streamlining the process for employers and putting limits on increases in the “adverse effect wage rate,” which varies by state and is meant to ensure the wages offered to immigrants don’t undercut American workers. It would increase funding for existing farmworker housing programs. And, it would require agricultural employers to use the federal E-Verify system to ensure their employees are in the country legally.

Undocumented immigrants make up a significant percentage of the farm workforce in Idaho and across the country. Simpson’s office provided a letter of support for the bill addressed to House leadership signed by well over 100 agricultural and business groups from around the country, including 25 groups from Idaho and some companies that are based elsewhere but have extensive operations in Idaho, such as the yogurt giant Chobani and the Irish cheese company Glanbia.

“Economists have found that every farmworker engaged in high-value, labor-intensive crop and livestock production sustains two to three off-farm jobs,” the letter says. “As foreign producers take advantage of our labor shortage and gain market share, America will export not only our food production but also thousands of these farm-dependent jobs. Securing a reliable and skilled workforce is essential, not only for the agricultural industry but for the U.S. economy as a whole.”

The Idaho Dairymen’s Association, which has been lobbying for immigration reform for years, put out a statement praising the bill. CEO Rick Naerebout said it would enhance national security by requiring E-Verify and address some of the group’s major priorities by letting current dairy workers stay and addressing industries such as theirs that need workers year-round, rather than seasonally which is what current visa programs are tailored toward.

“The bill offers workers the chance to earn legal status and continue to be an integral part of our farms and our communities,” he said. “The bill also offers dairy producers and other employers with year-round labor needs, for the first time ever, access to the program that offers jobs to temporary workers from other countries when no local workers are available to fill those positions.”

Eastern Idaho’s congressman hopes to introduce a bill in the coming weeks to make it easier for farmers to hire immigrant workers.