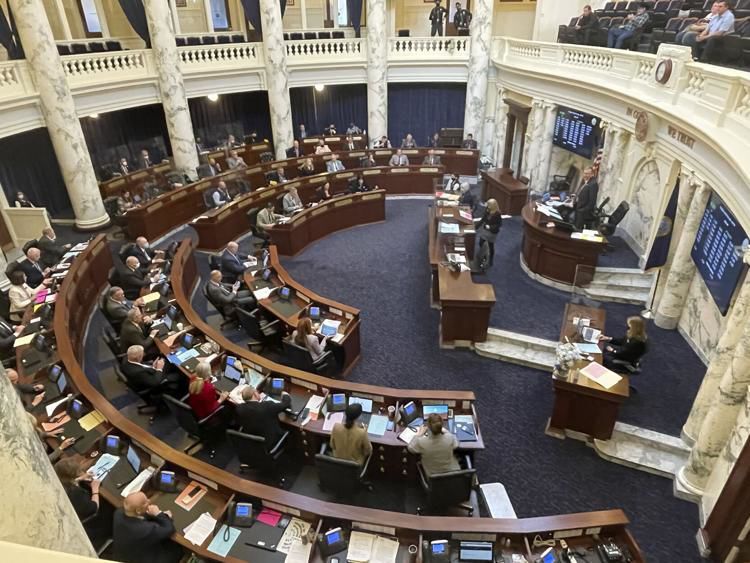 The Idaho House meets at the state Capitol in Boise on Tuesday, March 9, 2021. 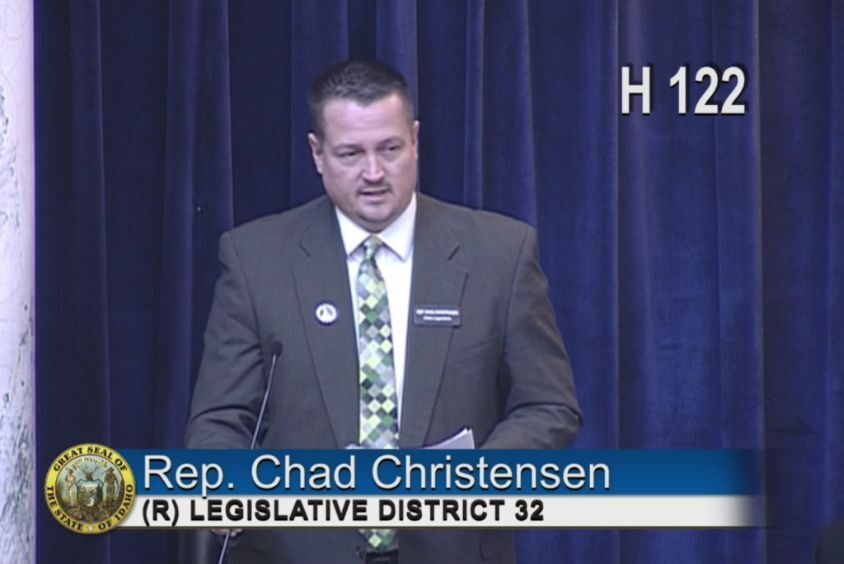 Rep. Chad Christensen, R-Iona, argues for his guns-in-schools bill in the Idaho House on Thursday, March 11, 2021.

The Idaho House meets at the state Capitol in Boise on Tuesday, March 9, 2021.

Rep. Chad Christensen, R-Iona, argues for his guns-in-schools bill in the Idaho House on Thursday, March 11, 2021.

BOISE — The Idaho House backed Rep. Chad Christensen’s guns-in-schools bill on a 52-18 vote on Thursday, sending it to senators for consideration – the furthest Christensen’s gotten with the proposal in three years of trying.

The bill, HB 122, would allow school employees who have enhanced concealed-carry permits to carry concealed guns at school, whether or not the local school board approves. “I know in the past this has been an issue about local control,” Christensen, R-Iona, told the House. “This is a 2nd Amendment issue, and for me, the 2nd Amendment doesn’t stop at the door of a school.”

He noted that the Idaho Sheriffs Association, state chiefs of police, and schools all oppose the bill, but said his local sheriff from Caribou County, which Christensen represents, “fully supports” it. “This is a bill about school safety and our children,” Christensen said. “The firearm is a tool, simple as that, and the fear of this tool is, I don’t get it, it’s just a tool, to help our children, to save lives.”

To become law, the bill still would need to clear a Senate committee, pass the full Senate, and receive the governor’s signature. That seems unlikely, as the Senate State Affairs Committee earlier this session introduced legislation backed by school boards to specify in law that school boards could allow staffers to carry concealed guns at school and set required training requirements; that’s basically what current law already allows. That bill, SB 1125, hasn’t advanced.

Christensen’s bill also would forbid schools from posting “Gun-Free School Zone” signs. House Education Chair Lance Clow, R-Twin Falls, asked Christensen if the bill would allow the general public to carry guns at schools; Christensen said no. So Clow questioned including that provision. “To me, that’s a sign that we’re telling the public, ‘Don’t bring your guns in to the school,’” Clow said.

Christensen said his thinking was that since school staffers would be allowed to concealed-carry, “it wouldn’t apply in that case as a gun-free school zone.”

“To me that is a target saying you can come into our schools and shoot us up,” Christensen declared. “Those need to go.”

Rep. Karey Hanks, R-St. Anthony, said as a school bus driver who drives kids to games and other activities, “I would appreciate that opportunity to legally carry to protect my students. … Driving down the road, somebody could jump in the back easily.”

Rep. Aaron von Ehlinger, R-Lewiston, said he’d like to carry a concealed gun when he substitute teaches. “I absolutely believe that the only way to stop a bad guy with a gun is a good guy with a gun,” he said.

Rep. Chris Mathias, D-Boise, debated against the bill. “Our school districts already have the ability to authorize school employees to carry firearms on school grounds,” he said. “The police chiefs are opposed to this, sheriffs are opposed to this, the schools are exposed to this.” Mathias said because the bill specifies that those staffers carrying concealed guns would have no duty to protect students, it adds risk to schools without any benefit. He asked, “The bill’s design is to create opportunities where a good guy with a gun can stop the bad guy with the gun, but if weapon holders don’t have a duty to perform like our law enforcement officers do, what’s the point of exposing our children to all the risk?”

Rep. Judy Boyle, R-Midvale, said, “Banks have armed guards, but our schools do not. Does that mean we think more of protecting money than we do our precious children? I would hope not.” She said, “Somebody better be there with a gun.”

Christensen said, “I don’t want to wait ‘til our kids are harmed when we can do something now.”

This is the third straight year Christensen has proposed the bill; both previous versions never made it out of committee.