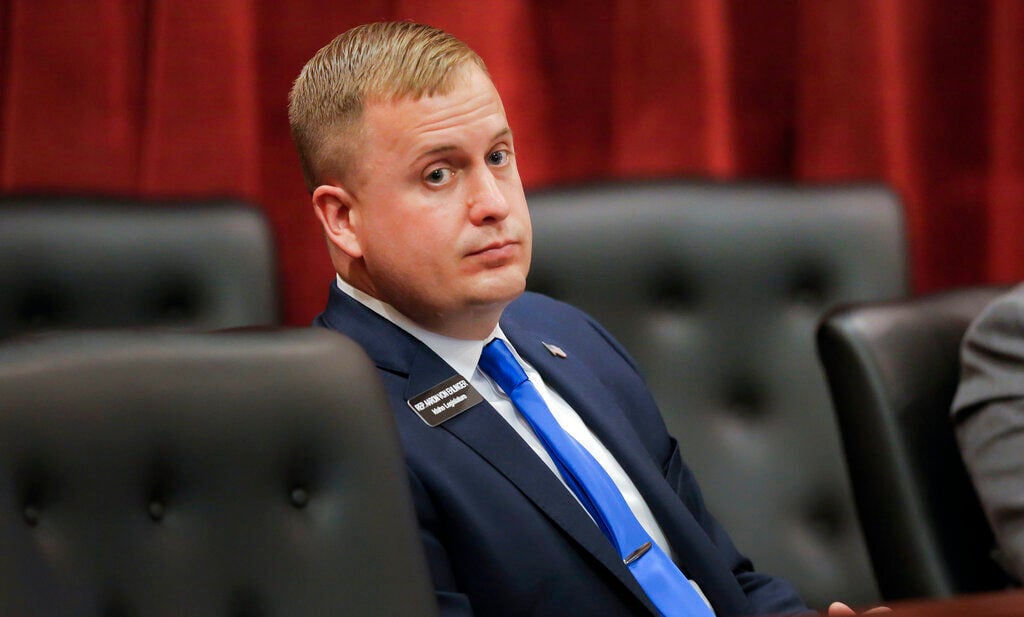 State Rep. Aaron von Ehlinger, R-Lewiston, listens as an alleged victim, identified as Jane Doe, offers testimony during a hearing before the Idaho Ethics and House Policy Committee, Wednesday, April 28, 2021, in the Lincoln Auditorium at the Idaho Statehouse in Boise, Idaho. 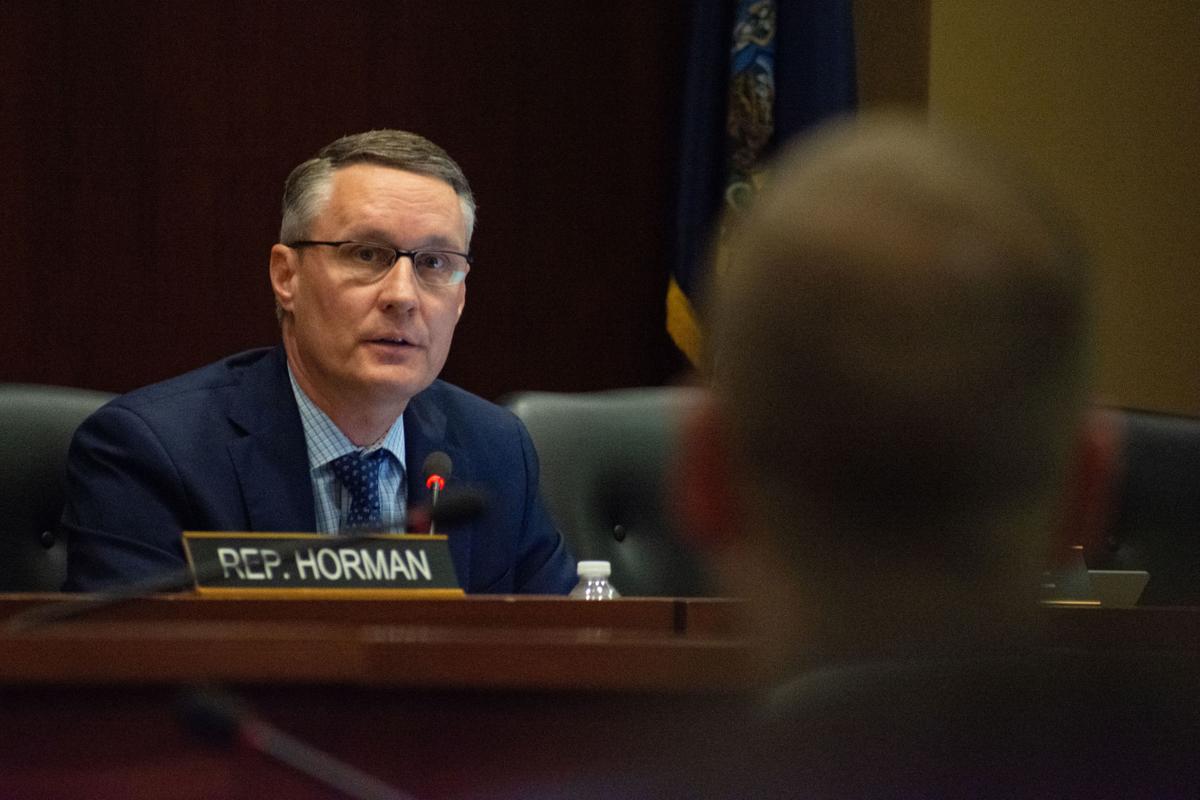 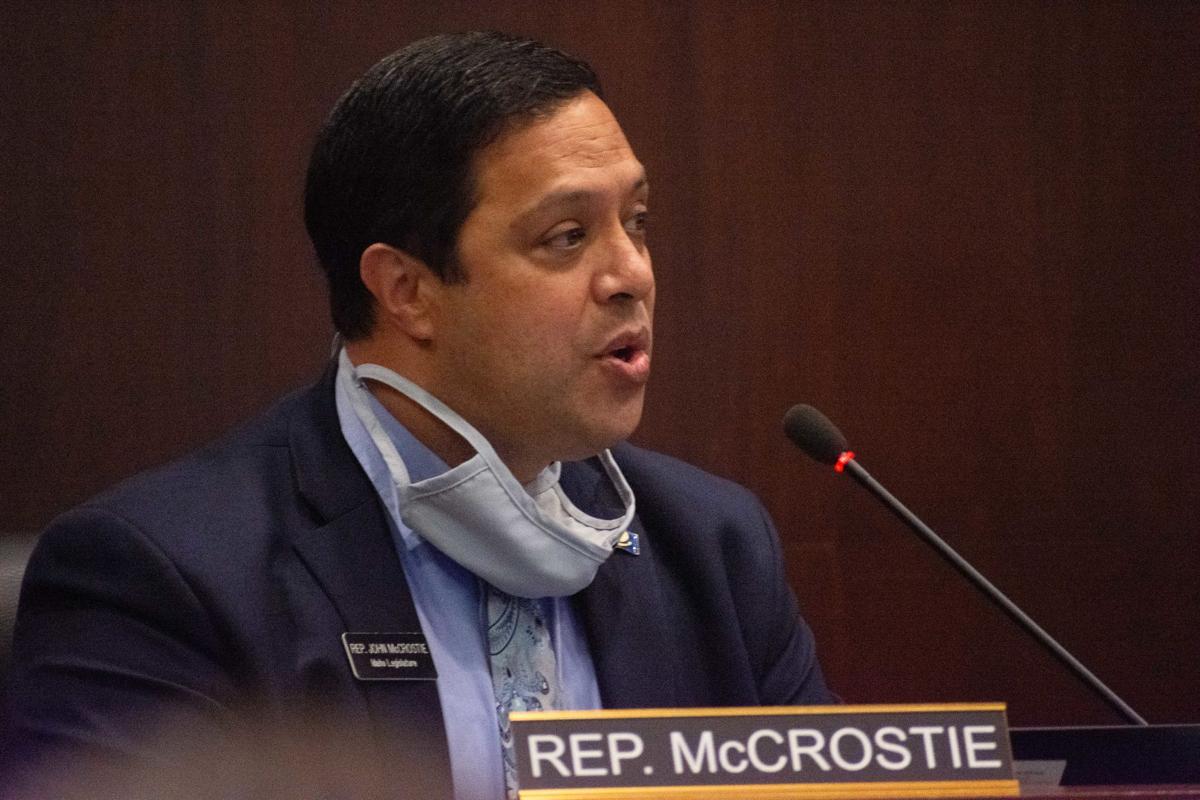 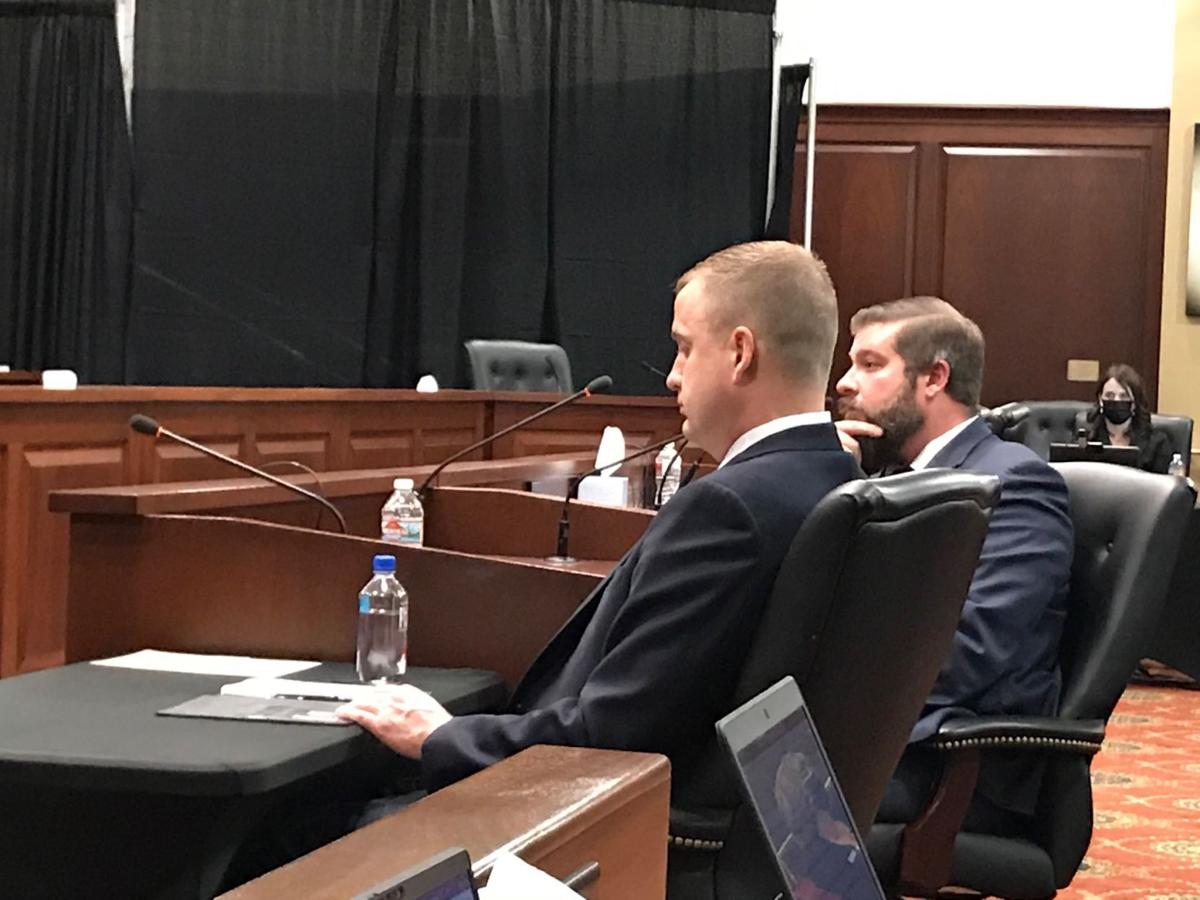 State Rep. Aaron von Ehlinger, R-Lewiston, listens as an alleged victim, identified as Jane Doe, offers testimony during a hearing before the Idaho Ethics and House Policy Committee, Wednesday, April 28, 2021, in the Lincoln Auditorium at the Idaho Statehouse in Boise, Idaho.

BOISE — The Idaho House Ethics Committee on Thursday voted unanimously to take the strongest possible actions against Rep. Aaron von Ehlinger, R-Lewiston, calling for his immediate suspension from office and for the House to expel him — and less than three hours later, he resigned rather than face an expulsion vote.

Committee members strongly condemned the behavior of the freshman state representative, who is accused of sexual assault of a 19-year-old House intern, plus pursuing, dating or asking out a total of four women employed in the Capitol this year, including, in some cases, sexual contact.

It would have taken a two-thirds vote of the House to expel von Ehlinger, and a majority vote to suspend and censure him.

Von Ehlinger was unrepentant in his resignation letter, writing, “I maintain my innocence of any wrongdoing.”

The Boise Police Department has a criminal investigation under way into the rape allegation. Von Ehlinger, who has not been criminally charged, maintains the sexual encounter with the young intern was consensual, the Associated Press reports.

Rep. John McCrostie, D-Garden City, said, “I’m not persuaded by the ad nauseum repetition of whether a specific policy exists. Common sense and basic morality dictates that an elected representative should not entertain a relationship with a student intern, regardless of who initiated the relationship. We heard with similar ad nauseum repetition how the representative should have known better.”

In his single term in the House, McCrostie noted, von Ehlinger had been warned multiple times about his behavior with women in the Statehouse and undergone two “respectful workplace” trainings. “And yet in that amount of time he has pursued four different women with ties not just to the Legislature but ... to the Idaho House.”

“This pattern of behavior of not only ignoring counsel on appropriate workplace boundaries but also pursuing relationships, including sexual relationships, within the House creates an unsafe environment in the House for any women that the representative may be interested in dating,” McCrostie said, adding, “although at least women who wear wedding bands will supposedly be off limits.”

That was a reference to Wednesday’s testimony that von Ehlinger asked out a House staffer in part because she wasn’t wearing a wedding band, though she was married. The staffer reported the incident to her supervisor.

Rep. Wendy Horman, R-Idaho Falls, said, “There is no House rule against poisoning another person, yet his behavior has poisoned the reputation of all of us.”

Rep. John Gannon, D-Boise, said, “For those who work and serve as interns in the Legislature, they have rights and expectations too. I was an intern once, well, several times, and so was my daughter. And so were your children and your family members. And they have a right to have a respectful, helpful workplace and a safe workplace for them. And a good positive experience.”

Rep. Brent Crane, R-Nampa, said, “There was indeed a predatory pattern that was established.”

The committee’s unanimous vote called for censuring von Ehlinger with the conditions that he immediately be suspended from service without pay or benefits for the rest of the current two-year legislative session, which runs through next year; that he immediately vacate his Capitol office and not return to the Capitol grounds for the remainder of the two-year session; and that a substitute be appointed to represent his legislative district. The panel also voted, in the words of Horman, who made the motion, that “we would unanimously support a procedurally proper motion before the House to expel Rep. von Ehlinger for good cause shown under … the Constitution of the state of Idaho.”

The panel also voted to hold von Ehlinger in contempt for refusing to answer the committee’s questions during his testimony on Wednesday, citing his Fifth Amendment rights against self-incrimination; and strongly condemned audience members who defied the committee’s stated rules for the hearing and filmed the young victim as she left the Statehouse hearing after her testimony on Wednesday, then shared the images.

“We are horrified by what happened after her testimony yesterday,” said a joint statement Thursday from the 19-year-old’s attorney, Erika Birch, and Annie Hightower with the Idaho Coalition Against Sexual and Domestic Violence. “… Again we urge the House of Representatives to show up for the teen survivor and all the other women who have been violated or made uncomfortable by von Ehlinger’s conduct. We demand accountability and immediate removal and expulsion.”

Horman on Thursday said, “This committee has gone to great lengths to protect the identity of the intern. The committee has never released her name. We protected her visual identity when she chose to testify ... and we asked all in the room, including the press, to do that as she entered and exited the building.” She said the committee “will also be inquiring further into that incident.”

The Capitol Correspondents Association, which is responsible for credentialing reporters who cover the Idaho Legislature, announced Wednesday afternoon that it was revoking the press credentials of a TV reporter, Emri Moore of CBS2, for filming the victim after her testimony “in direct violation of the announced rules for press coverage of the hearing, as well as in violation of widespread best practices adopted by nearly every major news media organization in the country.” The station apologized and said the video wasn’t aired or shared and has been destroyed.

Gov. Brad Little, who appointed von Ehlinger to the seat in June to fill a vacancy, said he supported the committee’s recommendation for expulsion. Von Ehlinger, before being appointed, had won the GOP primary for the seat; the election took place after the death of the incumbent, Rep. Thyra Stevenson, whose name remained on the ballot because she died after the deadline to withdraw it. Von Ehlinger faced no challenger in the November general election.

The governor stated, “I applaud Jane Doe and the other brave women for their courage in telling their stories and participating in this process to hold Representative Aaron von Ehlinger accountable for his deeply damaging and shameful actions. … Being elected by the people and serving in a legislative body carries immense weight and responsibility to act with dignity, civility, and integrity at all times. State elected officials are held to a higher standard. … Now, the public expects the full Idaho House Representatives to carry out the recommendation of the committee and ensure the integrity of the Idaho Legislature.”

Betsy Z. Russell is the Boise bureau chief and state capitol reporter for the Idaho Press and Adams Publishing Group. Follow her on Twitter at @BetsyZRussell. In the interest of disclosure, it should be noted that Russell is the current president of the Capitol Correspondents Association.