The Idaho Attorney General’s office is urging a federal judge to deny a request to clarify how the state will implement a new law limiting changes to people’s birth certificates.

In a court filing Friday, Deputy Attorney General Steven Olsen said federal Magistrate Judge Candy Dale shouldn’t rule further on House Bill 509 “until a justiciable case is brought before it” — which could happen, for example, if a transgender person were to be denied in their request to change their sex on their birth certificate to match their gender identity due to the law.

“Plaintiffs ask the Court to guess that the outcome of any conceivable petition in Idaho court to change the sex on a birth certificate would be a denial — instead of allowing an Idaho court the opportunity to apply HB 509 to an actual set of real-world facts in an actual controversy brought by an actual applicant,” Olsen wrote. “By asking the Court to hold that a state court (a nonparty) could never interpret or apply HB 509 to a petition without violating the injunction — which was issued to enforce the Equal Protection Clause — Plaintiffs are asking this Court to effectively declare HB 509 facially unconstitutional under the Equal Protection Clause.” 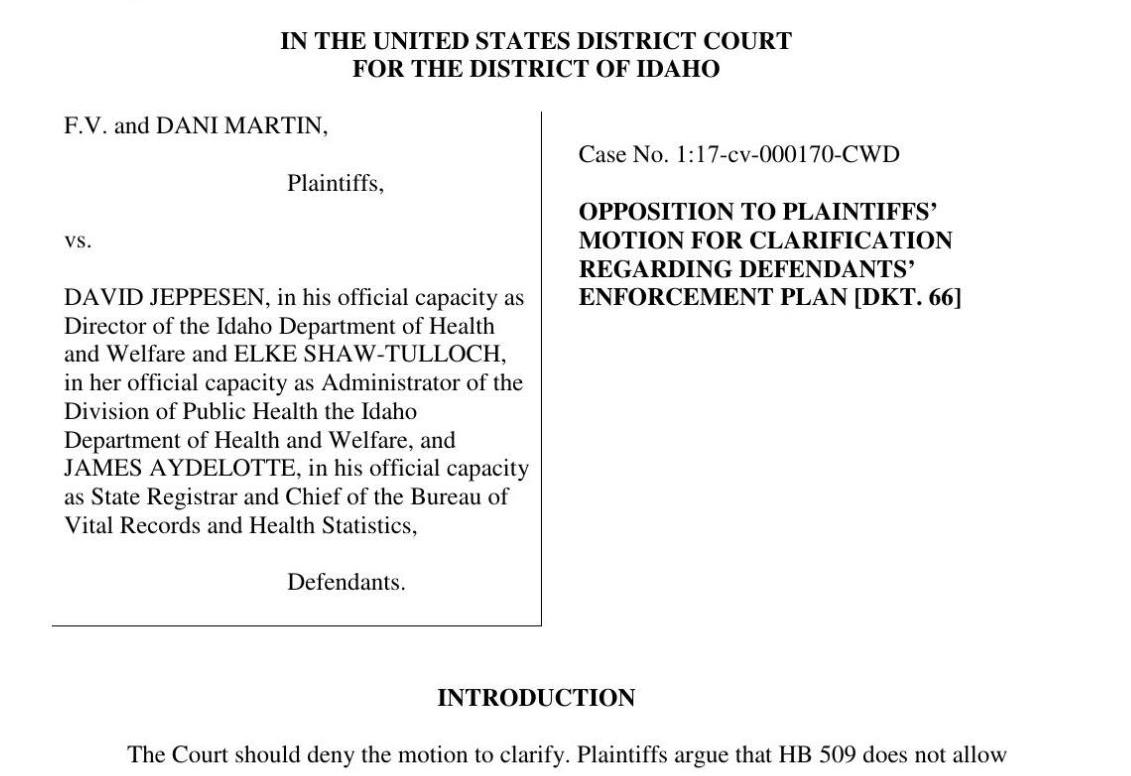 Olsen was replying to a motion from Lambda Legal, a pro-gay and transgender rights legal group that is challenging the state in federal court over the new law, demanding Idaho officials clarify how they plan to enforce House Bill 509, also known as the Idaho Vital Statistics Act. Olsen said the bill’s requirement that any birth certificate changes require a court order is not in and of itself unconstitutional or a violation of Dale’s 2018 injunction that required the state to let transgender people change their birth certificates. He argues the new policy is “materially different” from the previous policy covered by the injunction, which directed the state Department of Health and Welfare to categorically refuse all requests to amend a transgender person’s birth certificate to match their gender identity.

Dale ruled a month ago that her 2018 injunction is still in effect, although she hasn’t yet ruled on the constitutionality of House Bill 509. The bill passed the Legislature this year on a mostly partisan vote with almost all Republicans in favor and Democrats all opposed. It requires a court order to make any changes to a birth certificate after one year, and only allows changes “on the basis of fraud, duress or material mistake of fact.”

The bill’s opponents say it amounts to a categorical ban by setting up an impossible standard for transgender people to change their birth certificates. In a motion filed in late June asking the court to make the state clarify its enforcement plans, Lambda Legal lawyer Peter Renn pointed to the language of the law, which defines sex as “the immutable biological and physiological characteristics, specifically the chromosomes and internal and external reproductive anatomy, genetically determined at conception and generally recognizable at birth, that define an individual as male or female.” The bill says the state has an interest in maintaining records that accurately show a person’s sex at the time of birth and condemns “the conflation of sex and gender in health care.” All this, Renn said, shows there is no realistic way for a transgender person to change their birth certificate under the law.

“Defendants cannot show that a state court can lawfully issue an order under HB 509 for a transgender person to change their listed sex to match their gender identity, because the plain language of HB 509 unambiguously prohibits that,” he wrote. 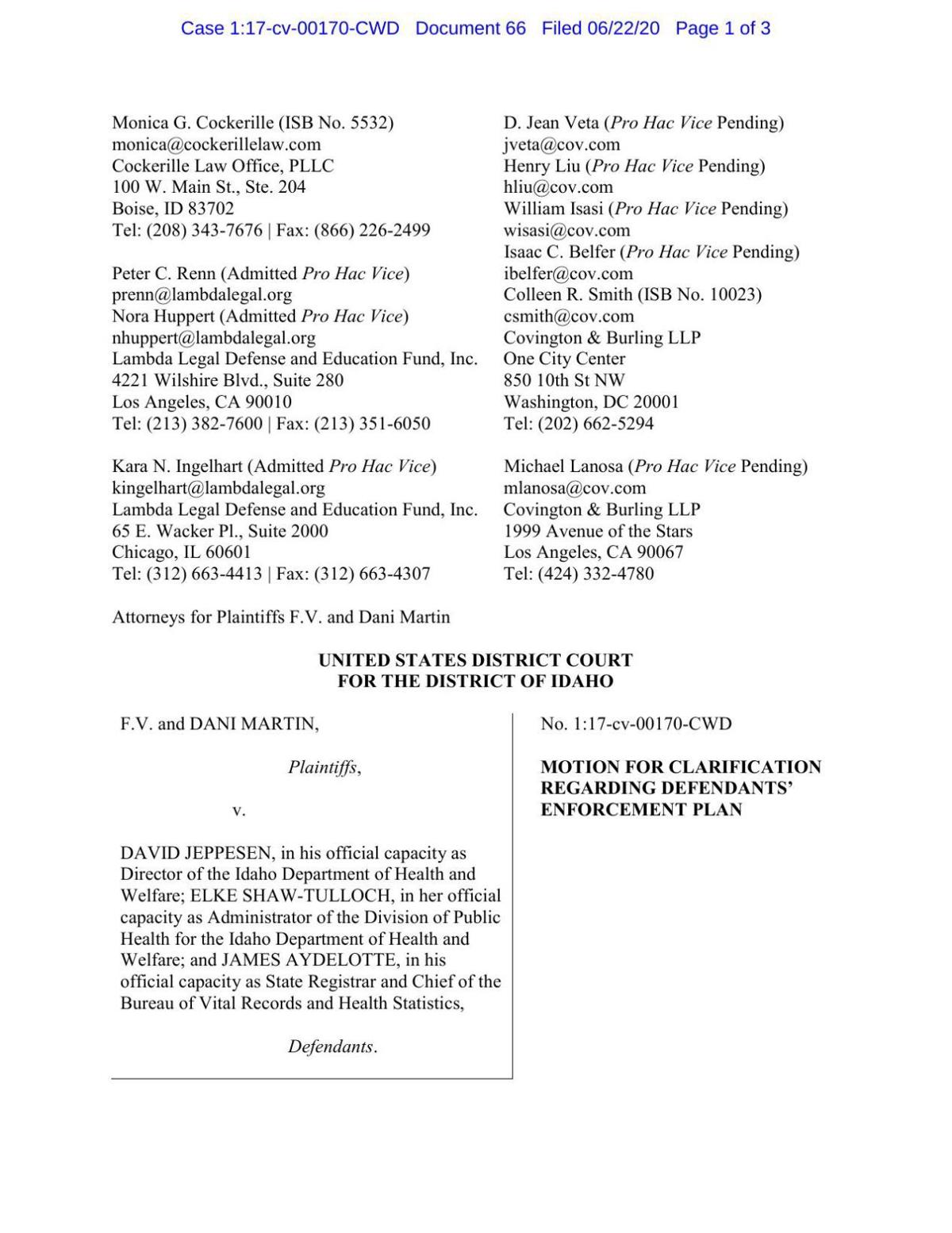 Renn argued the court can demand clarification of the state’s plans without waiting for a case.

“To illustrate, suppose a federal court orders public schools to be desegregated, but a state nonetheless enacts a new statute requiring segregation,” Renn wrote. “If the plaintiffs filed a motion to clarify that the conduct required by the statute is prohibited by the injunction, the state could not oppose the motion for clarification on the grounds that the court must first determine the ‘constitutional validity’ of the statute. The court already determined the constitutionality of the conduct at issue — that is why the conduct was enjoined.”

Lambda Legal’s response to Olsen’s latest filing is due Tuesday, per an order from Dale, after which she will inform the parties if a hearing needs to be held before she rules. Renn said last week he expects the court to hear further arguments on the bill in mid-July at the earliest.

Cellphones while driving, transgender and renters rights to be affected by new laws

Most of the laws passed during the last Idaho legislative session will take effect Wednesday.