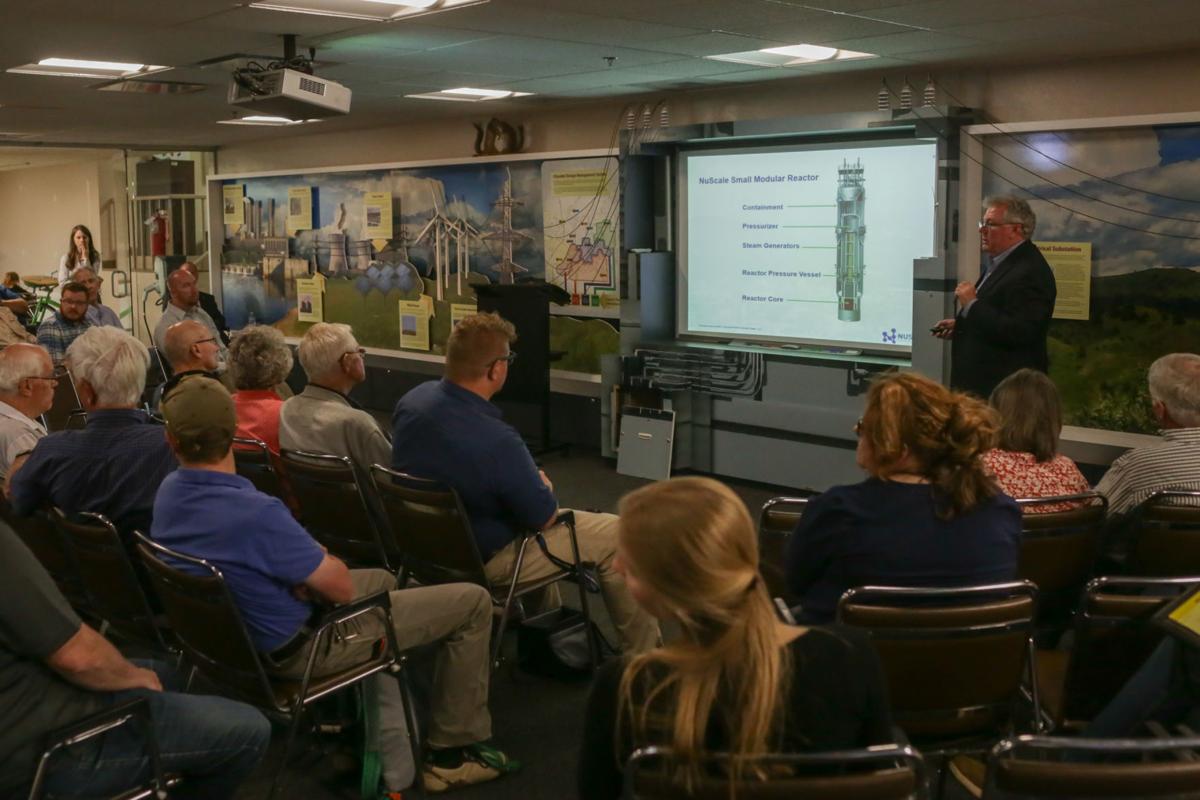 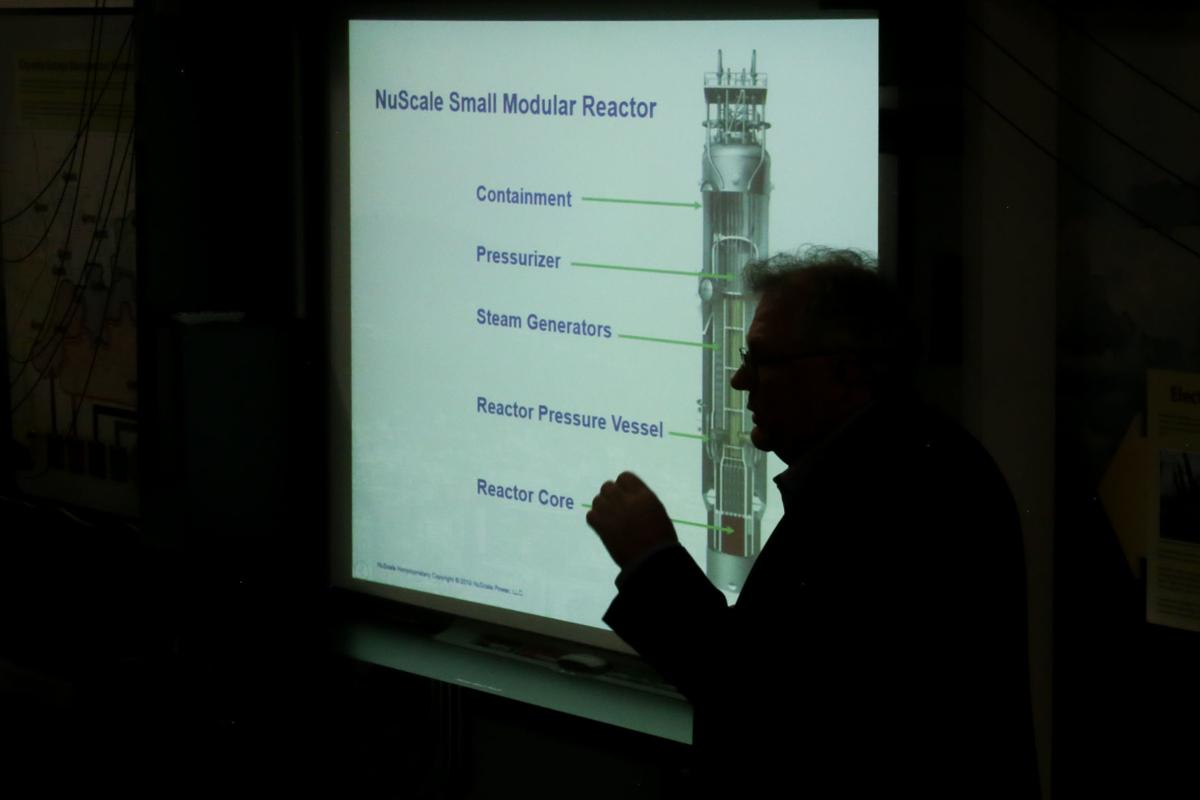 Michael Downs, NuScale Senior Reactor Operator, speaks to audience members about NuScale's small modular reactor at the Idaho Falls Power Energy Center on Thursday, Aug. 15, 2019. The SMR developed by NuScale would be 76 feet tall and be fully self-contained, being able to operate without additional safety backups like the water pumps that failed during the Fukushima Daiichi disaster in 2011 because their SMR is a closed loop system that can cool itself. 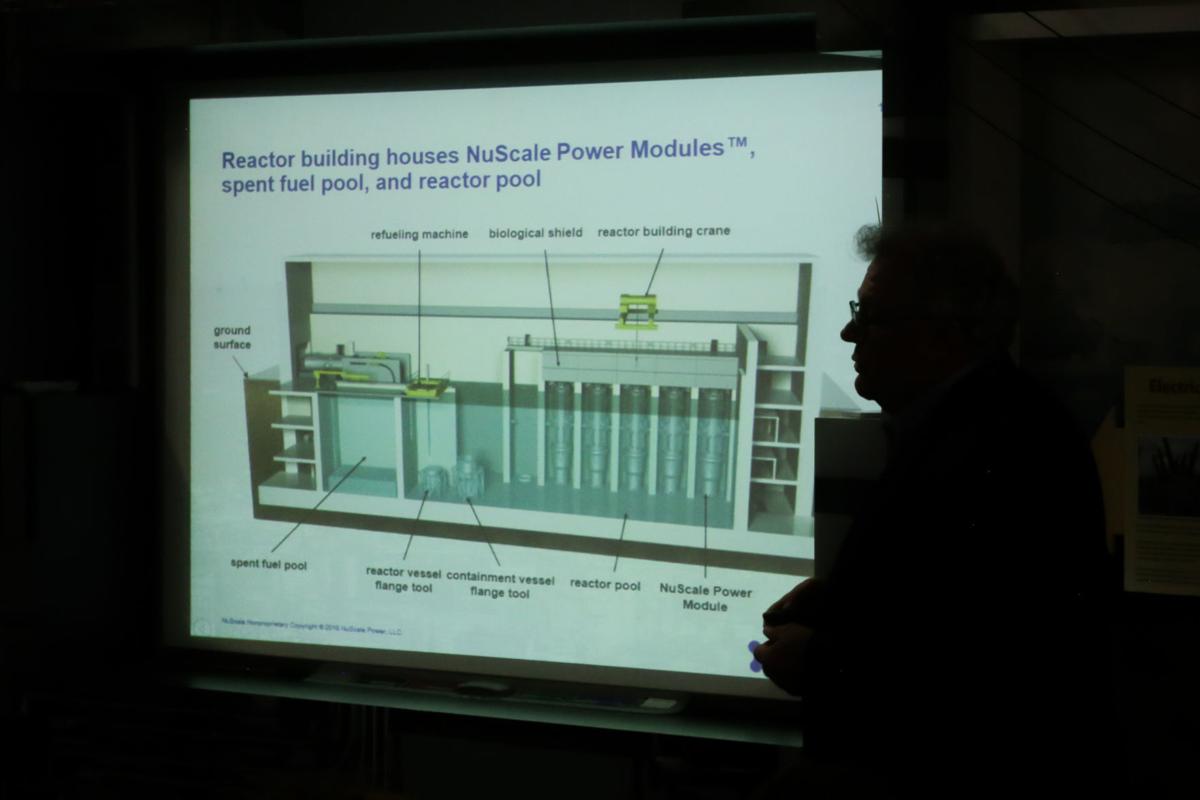 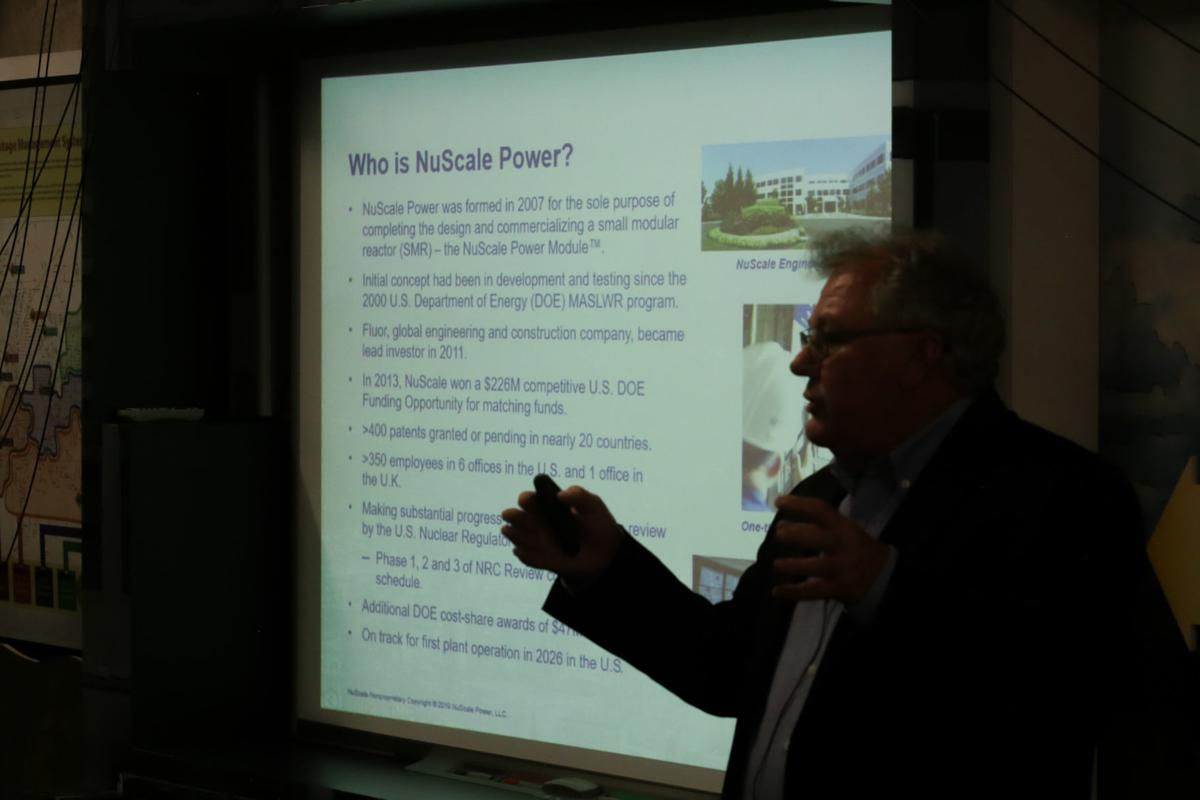 Michael Downs, NuScale Senior Reactor Operator, speaks to audience members about NuScale's small modular reactor at the Idaho Falls Power Energy Center on Thursday, Aug. 15, 2019. The SMR developed by NuScale would be 76 feet tall and be fully self-contained, being able to operate without additional safety backups like the water pumps that failed during the Fukushima Daiichi disaster in 2011 because their SMR is a closed loop system that can cool itself.

NuScale Senior Reactor Operator Mike Downs and Idaho Falls Power General Manager Bear Prairie spent about an hour-and-a-half explaining the project and the small modular reactors. They also answered questions from the audience. NuScale is working with Utah Associated Municipal Power Systems, of which Idaho Falls is a member, on its plans to build 12 small modular reactors, producing 720 megawatts of power, to help power Idaho Falls and other UAMPS member cities, in addition to providing power and help with research to Idaho National Laboratory.

Thirty-six of UAMPS’ 45 member utilities have signed on to the small modular reactor project. Idaho Falls has committed to 10 megawatts of power when the reactors first go online, which is expected to happen in 2026, and the city is looking at the possibility of taking over one of the reactors in 2034, after the U.S. Department of Energy is done using it for research, which would increase the city’s share to 14.8 megawatts.

NuScale was founded in 2007, Downs said, with the sole purpose of designing and commercializing small modular reactors. In 2011 the Fluor Corporation became the lead investor in NuScale; Fluor Idaho also has the waste cleanup contract at the site. Downs pointed to the estimated 7 million people who die every year from air pollution-related causes, and the billions more who don’t have access to water or health care, and said NuScale hopes it can alleviate these problems through its work.

“What we’re trying to do at NuScale is bring energy basically to the world,” he said.

“You just can’t build enough solar (or) wind ... that the world needs to meet the goals that are out there,” he said.

For Prairie, the reactors will fill gaps in the city’s power supply. The city gets most of its power from the Bonneville Power Administration for $38 per megawatt, most of it generated by dams on the Columbia River and its tributaries, but the city’s contract with Bonneville expires in 2028. The BPA’s power system isn’t getting bigger, Prairie said, while the amount of power Idaho Falls gets could decline after that due to growth throughout the Pacific Northwest.

“The pie is (only) so big,” Prairie said. “If everyone’s need for that grows, our slice of that could grow smaller.”

Also, when demand is high Idaho Falls sometimes has to buy power on the open market at higher rates. And the demand for electricity has been growing over the past few years, he said.

Another big factor for Prairie is keeping the city’s currently carbon-free power portfolio. Several western states have been passing laws restricting carbon emissions, and it is possible there could be similar federal laws in the coming years. Prairie said he wants to “make sure we’re continuing to future-proof our energy portfolio,” and the city won’t be able to do this with solar or wind power alone.

“It really is a market-based response to greenhouse gas emissions and any regulations that might come out from the Environmental Protection Agency,” he said.

NuScale has agreed to provide power at a maximum price of $55 per megawatt, although Prairie said he hopes the price ends up in the high forties. Prairie said NuScale is assuming the financial risk.

“Mike’s (Downs) going to take all that risk, and (the Department of Energy) and those entities,” Prairie said. “I’m not going to put that risk on Idaho Falls.”

The Nuclear Regulatory Commission is reviewing the proposal now, and the reactors are expected to be operational by the mid-2020s. Downs said the nuclear industry has a poor record when it comes to finishing projects on-time and under budget, but he said NuScale has been sticking to schedule so far.

One big difference NuScale’s reactor design and others, Downs said, is the cooling system.

The reactors will be built to last for 60 years. Nuclear plants are required to store their own used fuel, Downs said, and he said the fuel here will be kept in dry cast storage.

Downs also said NuScale is looking into using spent fuel in other reactors or for other purposes, although he said much of this technology isn’t well developed yet.