Idaho's entire congressional delegation sent a letter to U.S. Department of Energy Secretary Dan Brouillette on Wednesday urging him to do more to get spent nuclear fuel at the DOE site west of Idaho Falls ready for removal.

Idaho's lawmakers are asking Brouillette to start packing waste in interim storage at the site now in road-ready containers, which the U.S. Navy is already doing with the spent fuel at the Naval Reactors Facility at the site. This way, it will be ready to go if a permanent nuclear waste repository is opened elsewhere. They are also asking the department "to initiate activities needed to begin loading of spent nuclear fuel into a multi-purpose canister at the Idaho National Laboratory using existing facilities." 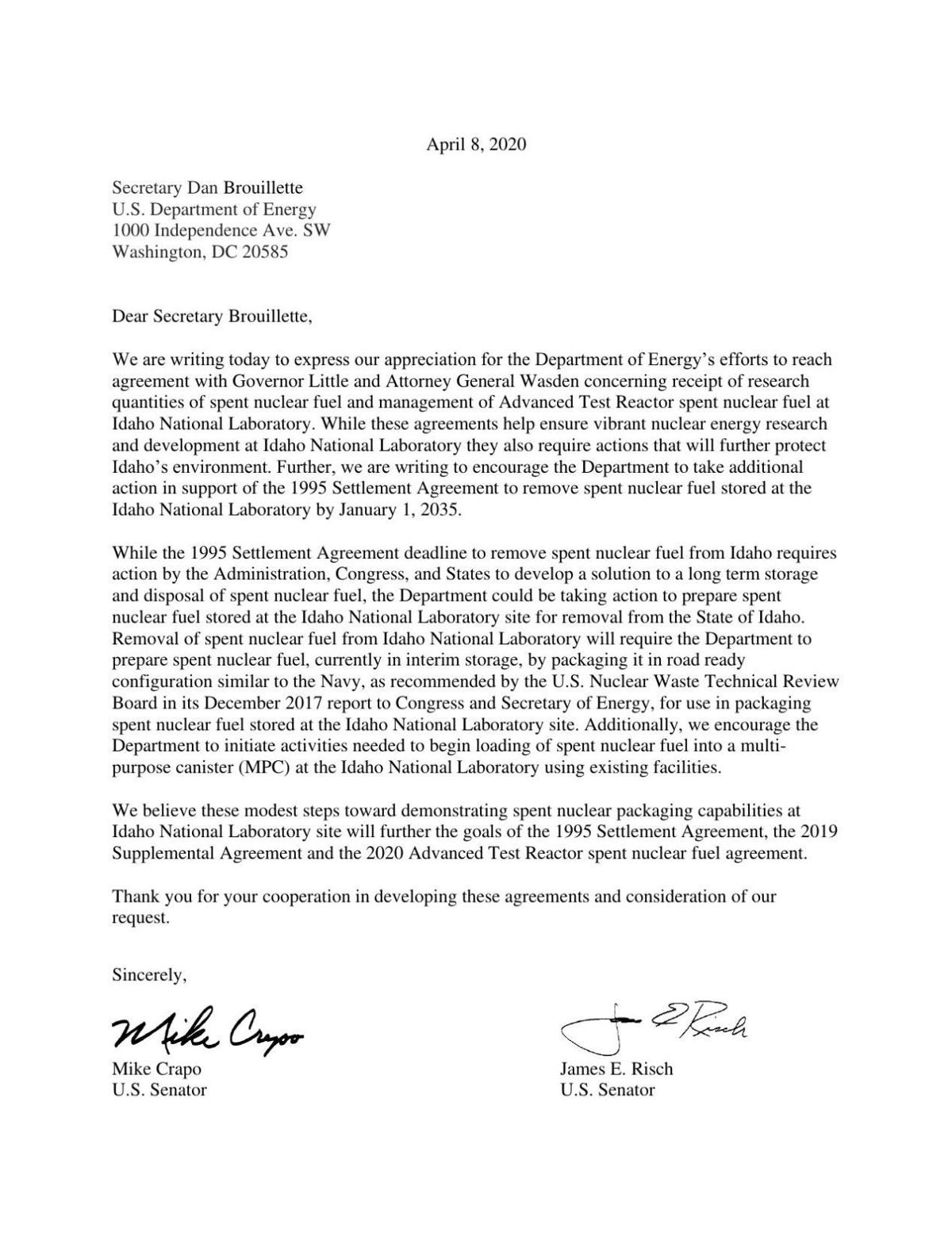 The 1995 agreement requires all spent nuclear fuel stored at the site to be out of Idaho by Jan. 1, 2035. However, the lack of a permanent repository has long been an issue for U.S. nuclear energy policy. Congress approved creating one at Yucca Mountain, northwest of Las Vegas, in 2002, but the project has been held up for years largely due to in-state opposition.

"While the 1995 Settlement Agreement deadline to remove spent nuclear fuel from Idaho requires action by the Administration, Congress, and States to develop a solution to a long term storage and disposal of spent nuclear fuel, the Department could be taking action to prepare spent nuclear fuel stored at the Idaho National Laboratory site for removal from the State of Idaho," the delegation wrote.

The letter also thanks DOE for working with Gov. Brad Little and Attorney General Lawrence Wasden on two recent modifications to the 1995 agreement. The first, announced in November 2019, would let DOE bring small quantities of spent research fuel into the state if certain cleanup deadlines are met, while the second, announced in February, would let DOE keep some spent fuel at the Advanced Test Reactor. Both agreements are still subject to the 2035 deadline.

BOISE — Idaho’s governor and attorney general announced a new deal with the U.S. Department of Energy on Tuesday addressing the handling of sp…