A federal judge ruled Friday that a new Idaho law barring transgender people from changing their birth certificates to match their gender identities violates her 2018 injunction directing the state to allow such changes.

“Indeed, there is no scenario under which a transgender individual can obtain a court order pursuant to (House Bill 509) to have the indicator of sex on their Idaho birth certificate reflect their gender identity,” Magistrate Judge Candy Dale wrote in her 11-page ruling. “That is, in fact, the very intent of (the bill), that only an individual’s biological sex will be recorded on an Idaho birth certificate.”

Dale’s ruling grants a motion filed by the plaintiffs challenging the law that asks the state to clarify how the law will be implemented. While the question of the law’s constitutionality wasn’t before the court in that particular motion, Dale held the law is “directly at odds with the clear intent and mandate of the Injunction” she imposed in 2018. 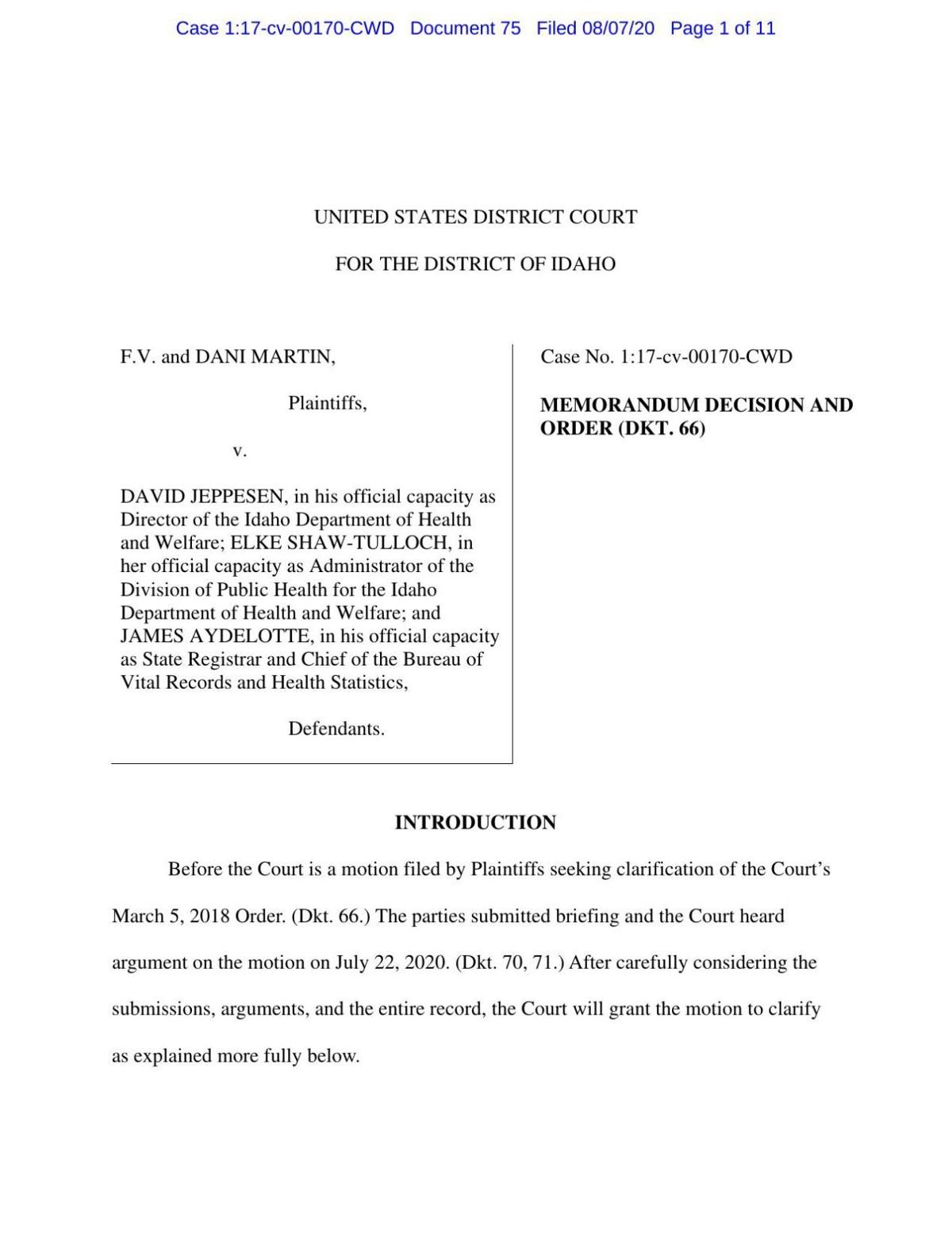 “We’re thrilled that the court acknowledged what the Idaho Legislature had already made obvious, that HB 509 was an effort to overturn a federal court order and that it was an effort to completely close off the avenue for transgender people to correct their birth certificate,” said Nora Huppert, one of the lawyers with Lambda Legal who has been challenging the law. “The state has asked the court to pretend that the law doesn’t mean what it says, and that the Legislature didn’t mean what it wrote, but the court saw through that.”

Idaho started to allow transgender people to change their birth certificates after that ruling, but in 2020 lawmakers passed the Idaho Vital Statistics Act, which sets limited criteria to amend a birth certificate, requires a court order to do so and contains language saying birth certificates should reflect someone’s biological sex at birth rather than a person’s later gender identity. The law was sponsored by Rep. Julianne Young, R-Blackfoot, and passed on mostly party-line votes with Republicans in support and Democrats opposed.

Dale wrote the new procedure for changing a birth certificate the state Department of Health and Welfare implemented as of July 1 in response to the law “effectively denies transgender individuals a meaningful process for changing the sex listed on their birth certificate to reflect their gender identity. This violates the injunction’s directive prohibiting IDHW from categorically rejecting applications from transgender people to change the sex listed on their birth certificates and its mandate that IDHW allow such applications.”

What happens next depends on how the state reacts to the ruling. Attorney General Lawrence Wasden’s office declined to comment and Marissa Morrison, spokeswoman for Gov. Brad Little, said his office was still reviewing the ruling Friday afternoon. Huppert said Lambda Legal is “certainly preparing for all possible next steps.”

“If the state continues to try to violate the court’s injunction, we’ll be ready,” she said. “We’ll make sure they continue to comply with the federal court order, including, if necessary, through contempt.”