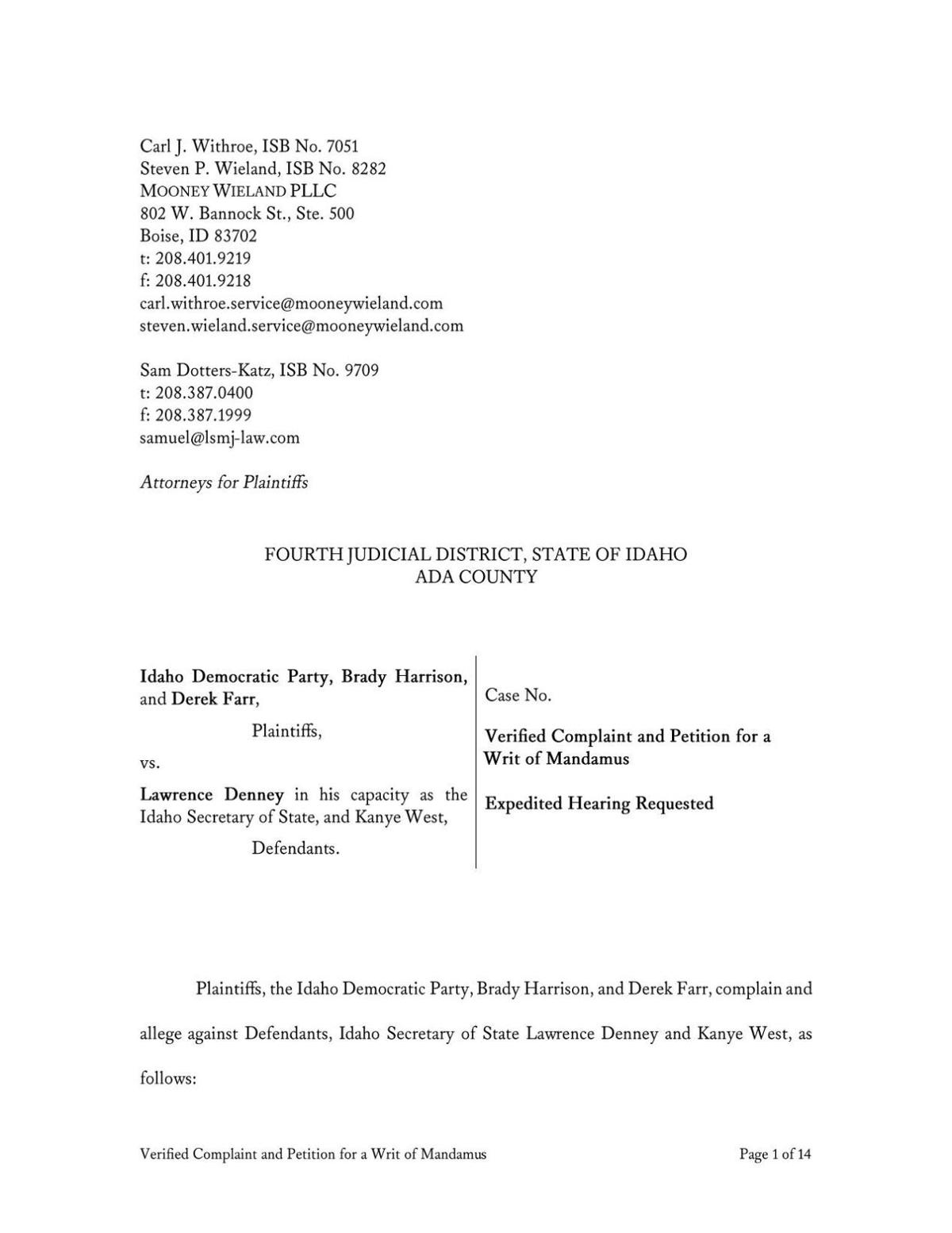 West, 43, a famous rapper and music producer, has filed to run as an independent. The Idaho Secretary of State’s office has already certified the candidates and sent sample ballots to the counties, and ballots are already being printed. However, the suit, which was filed in Ada County district court, argues West is ineligible because Idaho code says independent presidential candidates need to certify they “have no political party affiliation” and West is a registered Republican in his home state of Wyoming.

“This case is about upholding the integrity of our elections,” said Carl Withroe, one of the plaintiffs’ lawyers. “A candidate who is not eligible for the ballot appearing on some or all of the ballots Idaho voters will use this November will cause confusion, and that is not helpful. We are sensitive to the fact that deadlines for printing and mailing ballots are close. That’s why we asked the secretary to address it and why we’re seeking resolution as soon as possible.”

Withroe and fellow lawyers Steve Wieland and Sam Dotters-Katz are representing the Idaho Democratic Party and plaintiffs Brady Harrison and Derek Farr, both of whom are unaffiliated Idaho voters.

Withroe wrote to Secretary of State Lawerence Denney on Wednesday asking that West be removed from the ballot. Denney told the Idaho Press’ Eye on Boise blog that West was probably ineligible but declined to remove him from the ballot, pointing to upcoming or already-passed deadlines to get ballots printed and sent to voters and the fact that ballots are already being printed.

The suit asks the court to issue an injunction directing Denney to withdraw the previously certified list of names and direct county clerks not to mail out any ballots bearing West’s name.

West has successfully qualified for the ballot in about a half-dozen states, although he has missed deadlines in others or been disqualified due to invalid signatures or legal challenges. West was recently kicked off the ballot in Arizona. While the original lawsuit, in Arizona, as in Idaho, sought to remove him from the ballot on the grounds he broke an Arizona law requiring independent candidates not to be affiliated with a party, the state’s Supreme Court ended up upholding a lower-court ruling barring West from the ballot on the narrower grounds that West’s electors didn’t file some necessary documents.

Denney told Eye on Boise on Friday that he had received a legal opinion saying he can’t remove West from the ballot, citing the 2008 Henry v. Ysursa Idaho Supreme Court case. Denney said it is “up to the candidate” to be truthful in their declaration that they aren’t affiliated with a party.

“As long as they file their paperwork, what the court case says is basically I don’t have the authority to take them off,” Denney said.

Ballot Access News reported on Thursday that several candidates have run for president as independents in Idaho in the past even though they were registered with parties in other states, including Darrell Castle in 2016, Jill Stein in 2012 and 2016, Rocky Anderson in 2012 and John Anderson in 1980.

Kanye West to appear on Idaho ballot despite legal questions

Kanye West will be on Idaho’s presidential ballot, even though there is still an outstanding question of whether he can legally be on it.