A lawsuit was filed in federal court Wednesday seeking to get Idaho’s sodomy law stricken down as unconstitutional.

The statute in question, which dates back to the territorial era, refers to it as the “crime against nature,” punishable by at least five years in prison. Historically it was used sometimes to punish acts that would fall under sexual assault laws today but also to punish consensual acts, particularly between men. Perhaps the most infamous example of this is the 1950s “Boys of Boise” case, an anti-gay witch hunt that led to numerous convictions under the statute.

While Idaho’s law has been unenforceable as far as it pertains to acts between consenting adults ever since the 2003 Lawrence v. Texas U.S. Supreme Court ruling, it is still on the books. The John Doe client in this lawsuit says he has been forced to register as a sex offender in Idaho because of an out-of-state, pre-2003 sodomy conviction.

The same law also criminalizes sex between a human and an animal, which Doe is not seeking to legalize — the suit asks the court to declare the law unconstitutional “as it relates to activity between human beings” specifically. 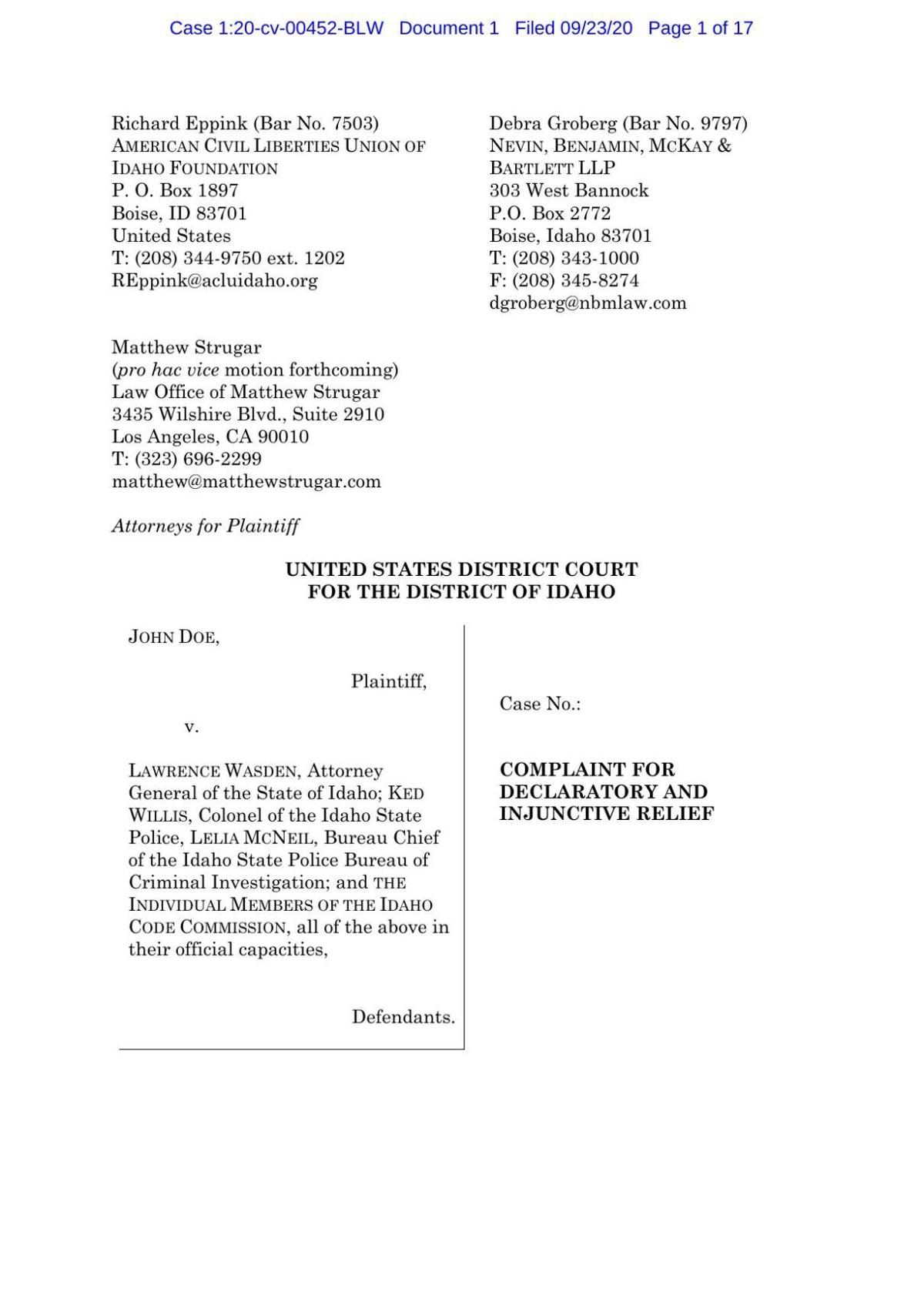 Strugar also represented the plaintiffs in a 2016 case challenging Mississippi’s sodomy law. Richard Eppink with the American Civil Liberties Union of Idaho and Debra Groberg, of the Boise firm Nevin, Benjamin, McKay and Bartlett, are also representing the plaintiff.

The suit asks the federal court to enjoin Idaho from either enforcing the law as it pertains to activity between humans or from forcing people to register as sex offenders for convictions of acts with people either under Idaho’s sodomy law or, as is Doe’s case, under another state’s. A hearing date has not yet been set.

About a dozen states, including Idaho, still had sodomy laws at the time of the 2003 ruling, although by then they were seldom-used in cases involving consenting adults. It couldn’t be immediately determined how often Idaho prosecutors have used the law since then — the Idaho Prosecuting Attorneys Association didn’t respond to a request for comment by press time, and a records request filed with the state court system hasn’t been answered yet — but it isn’t a dead letter. Earlier this month the Idaho Supreme Court issued a ruling in an appeal stemming from a sexual assault case where the defendant was convicted under the crime against nature statute.

Strugar said striking down the law shouldn’t inadvertently legalize acts that should be illegal.

“For things like rape, for things like child molestation, things we’re not seeking to protect here, other laws already apply,” he said.

If there are unforeseen consequences, Strugar said the Legislature can fix it by passing a new, constitutional law instead of trying to enforce unconstitutional one.

“There’s no need to have specific laws that criminalize sexual activity traditionally associated with homosexuality,” he said.