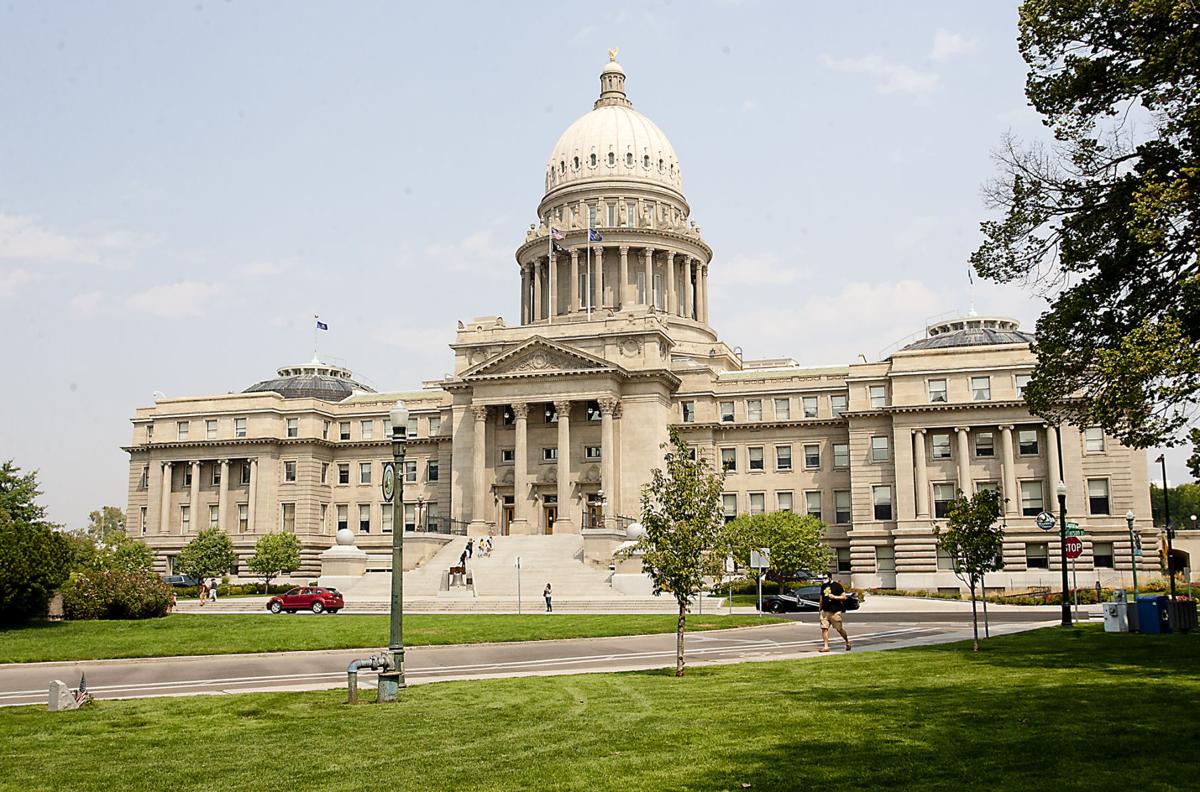 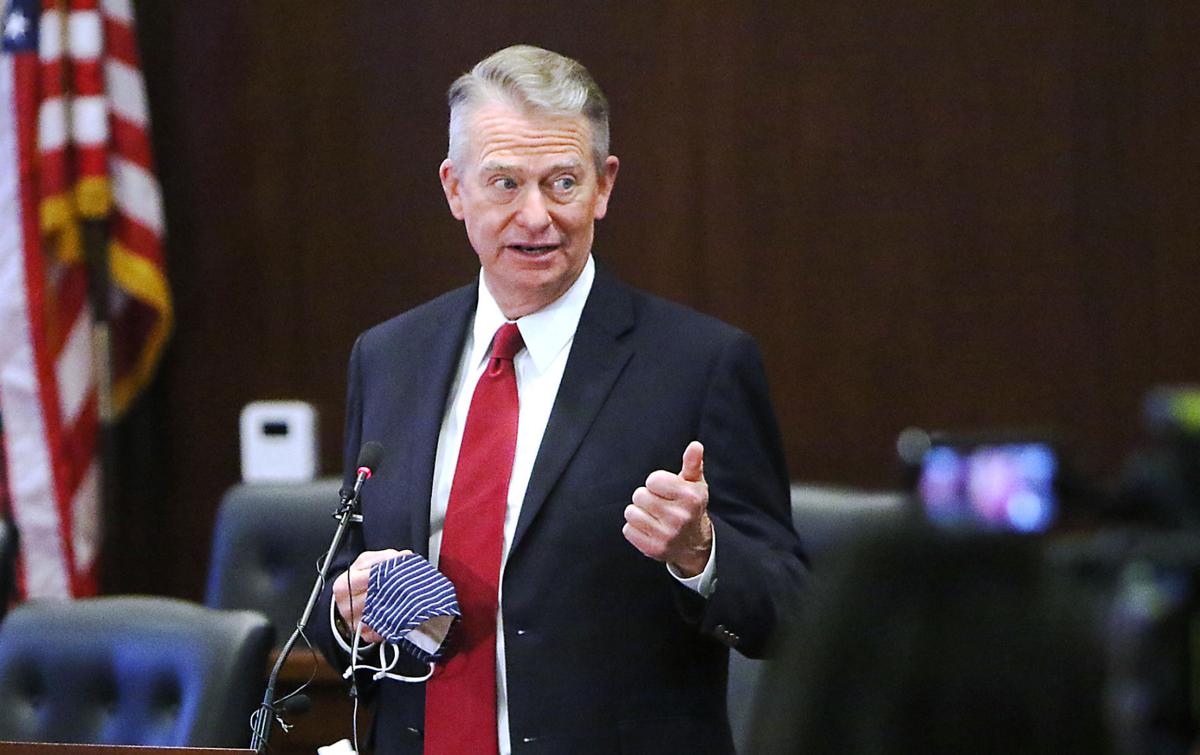 Gov. Brad Little speaks with members of the media during a recent coronavirus press conference in the Lincoln Auditorium at the Idaho State Capital. 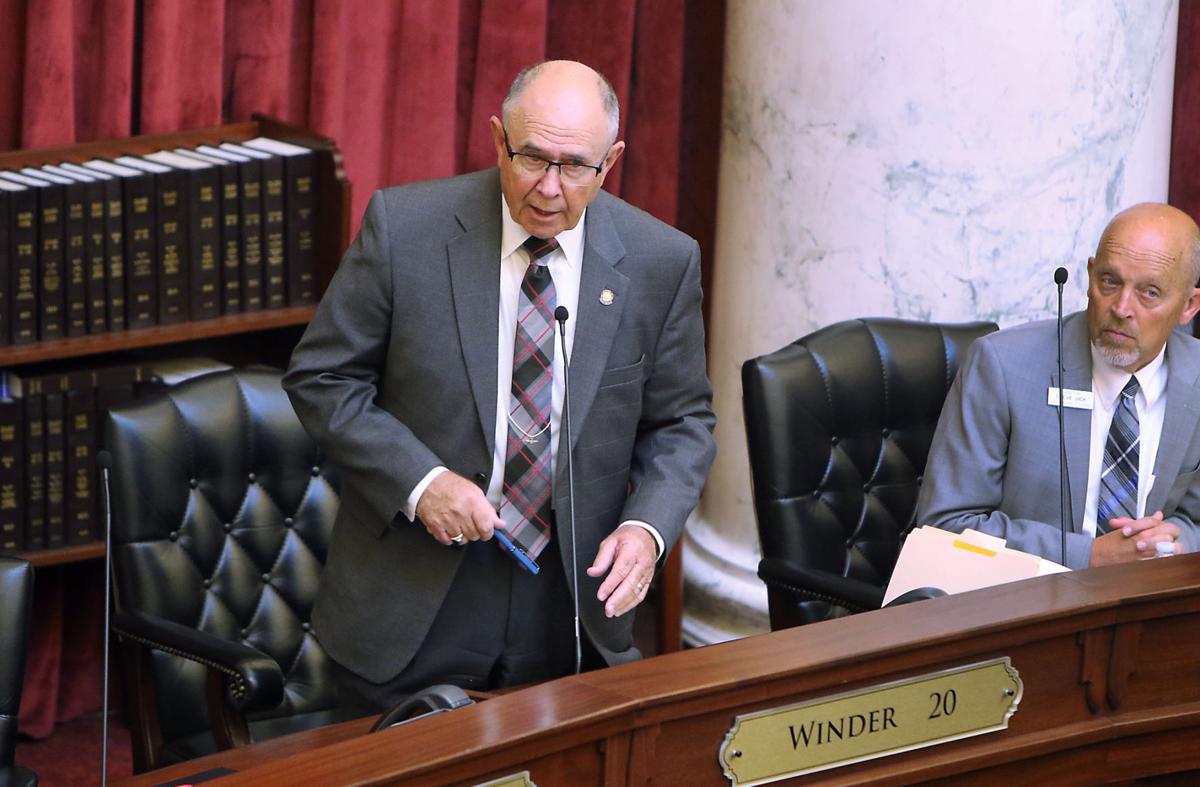 BELOW: Lawmakers gather in the house chambers during a special session at the Idaho State Capital, Monday, Aug. 24, 2020. 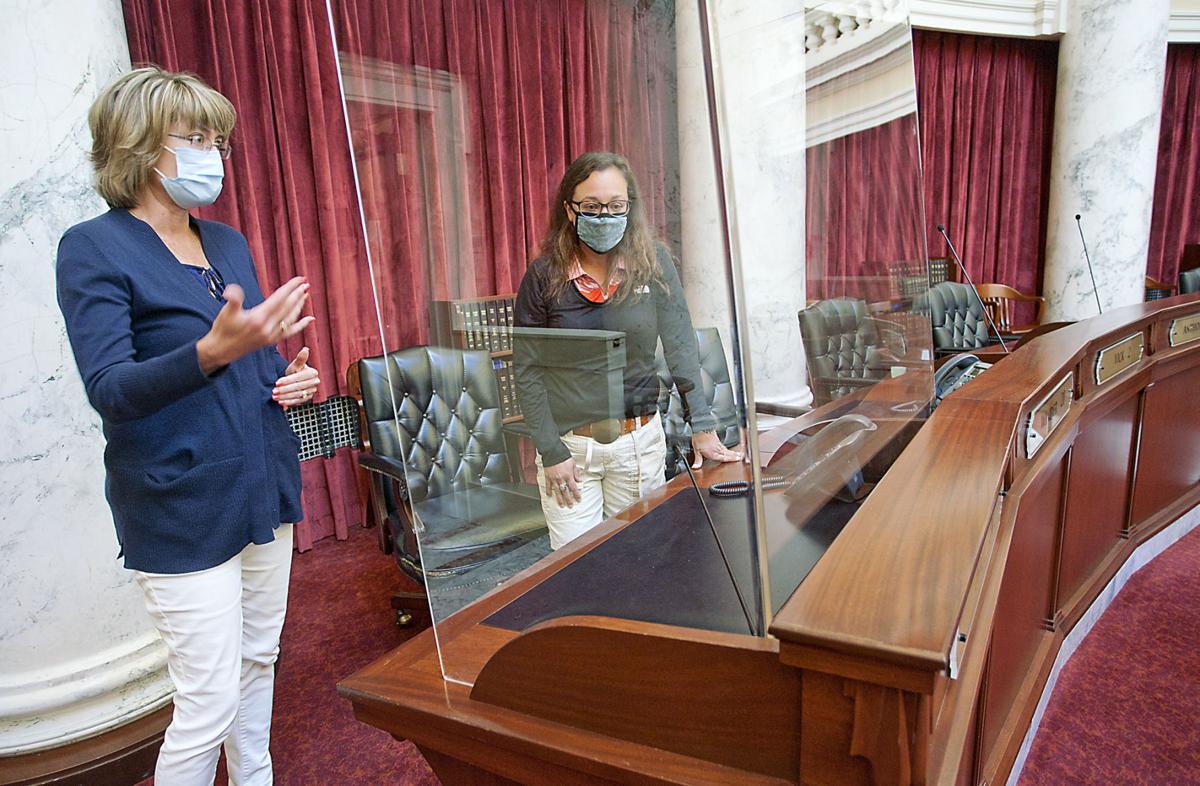 Terri Kondeff, deputy director of the Legislative Services Office, at left, and Jennifer Novak, Secretary of the Senate, look overa prototype plexiglass divider, temporarily in place in the Senate Chambers at the Idaho State Capitol, Wednesday, Aug. 12, 2020. The dividers are planned as a way to protect legislators from the spread of coronavirus during the upcoming legislative special session. 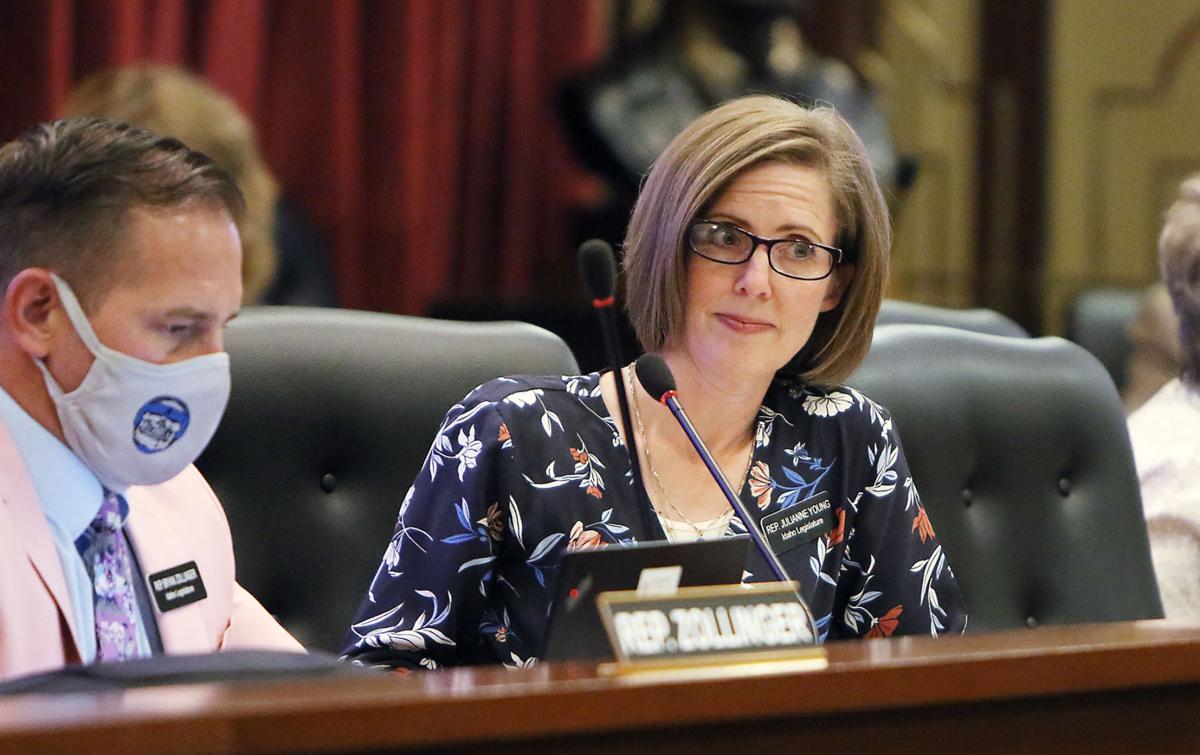 Rep. Julianne Young speaks during a meeting in the Lincoln Auditorium at the Idaho State Capital, Monday, Aug. 24, 2020. 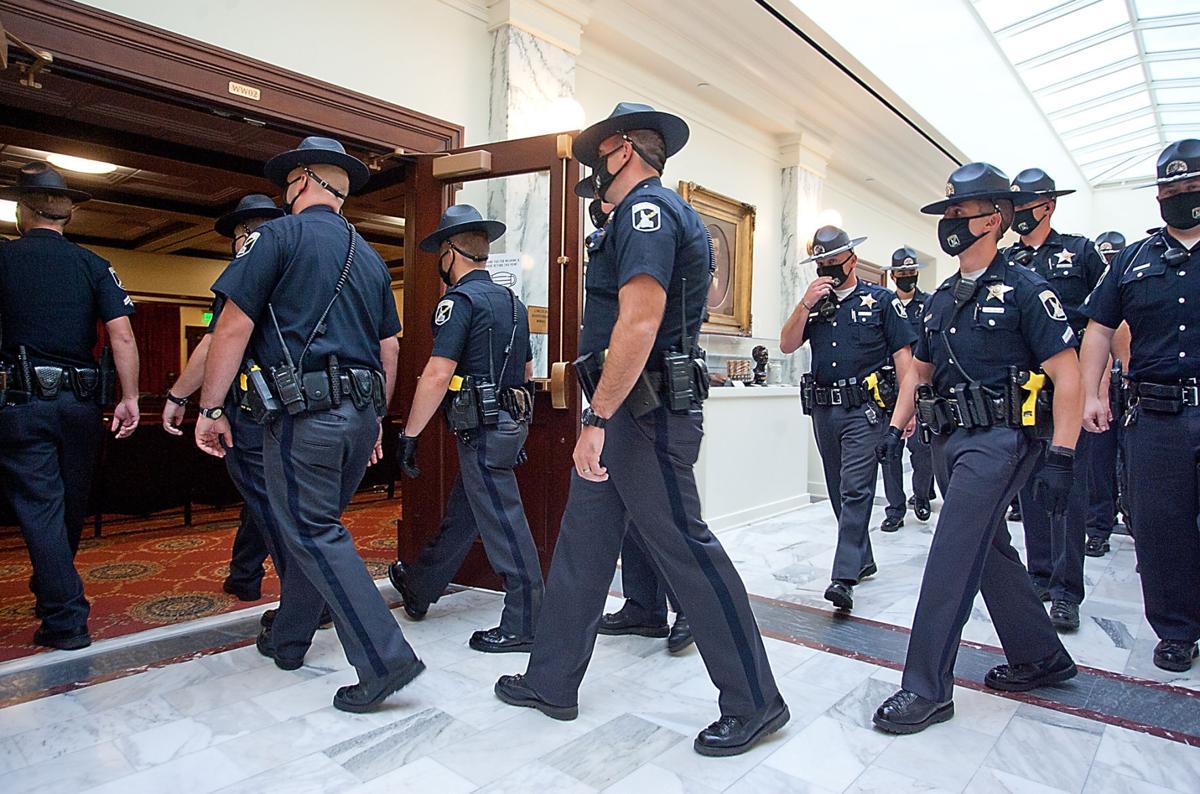 Idaho State troopers march into the Lincoln Auditorium at Idaho State Capitol after Ammon Bundy and two others refused to leave following an order by the House speaker, Tuesday, Aug. 25, 2020.

Gov. Brad Little speaks with members of the media during a recent coronavirus press conference in the Lincoln Auditorium at the Idaho State Capital.

BELOW: Lawmakers gather in the house chambers during a special session at the Idaho State Capital, Monday, Aug. 24, 2020.

Terri Kondeff, deputy director of the Legislative Services Office, at left, and Jennifer Novak, Secretary of the Senate, look overa prototype plexiglass divider, temporarily in place in the Senate Chambers at the Idaho State Capitol, Wednesday, Aug. 12, 2020. The dividers are planned as a way to protect legislators from the spread of coronavirus during the upcoming legislative special session.

Rep. Julianne Young speaks during a meeting in the Lincoln Auditorium at the Idaho State Capital, Monday, Aug. 24, 2020.

Idaho State troopers march into the Lincoln Auditorium at Idaho State Capitol after Ammon Bundy and two others refused to leave following an order by the House speaker, Tuesday, Aug. 25, 2020.

On Monday the House and Senate will gavel in for the first regular session of the 66th Idaho Legislature, and while there are going to be plenty of other issues to talk about, COVID-19 will loom over the proceedings in a few ways.

That first day, where the governor gives his State of the State address and unveils his budget proposal for the coming year, will look a little different. Instead of giving his speech from the House dais in a very non-socially distanced room with legislators and other public officials packed shoulder-to-shoulder, Gov. Brad Little will give it from the Lincoln Auditorium, with streams of it broadcast in both the House and Senate.

While the governor doesn’t release the budget or the contents of the speech until that day, Idaho’s state revenues, unlike some other states whose budgets have taken a hit due to the pandemic, have been coming in stronger than expected. Little said in December he plans to “put forth a package in January for legislative approval that provides tax cuts and makes one-time investments in transportation, education, water projects, and more.” In an interview Tuesday on the conservative talk radio show The Neal and Julie Show, he said education, tax relief and transportation are still his main focuses for the session.

“Those have been my priorities, and for the most part the legislators I’ve talked to, (they) have been their priorities,” Little said. “I won’t say it’s going to be a lovefest, but it’s a little hard to argue against those three things.”

While lawmakers will not be required to wear masks and many Republicans, judging by the fact that they didn’t wear masks at the August special session and December organizational session, won’t be, the Capitol will be full of visible reminders of the pandemic. Committee rooms, which can get quite crowded when a controversial bill is being discussed, will have reduced seating to force the public to socially distance. There will be hand sanitizer station and air purifiers. The Democrats have all worn masks this year and many have put plexiglass barriers around their desks, and some have been critical of the safety measures the majority is taking as insufficient or even called for the session to be delayed.

And the virus will loom over what is expected to be one of the biggest debates of the session — namely, whether to put new limits on the governor’s powers. Many Republican lawmakers have been critical of Little’s stay-home order and local regulations such as mask mandates and have said they plan to push measures such as a constitutional amendment letting the Legislature call itself into special session, something only the governor can do now.

Senate, House full of new faces{/strong}Seventeen out of the 70 members of the House, or almost a quarter of the body, were just elected this year, although a few of them are former legislators who decided to run again and won. Six of the Senate’s 35 members were just elected to the body, although half of them were House members first.

The House Republicans will have the same leaders as they did before, and while there was some reshuffling on the lower rungs of the Democratic leadership Rep. Ilana Rubel, D-Boise, and Sen. Michelle Stennett, D-Ketchum, kept their top minority leadership spots. However, the Republican Senate leadership will look a bit different. Most notably Sen. Chuck Winder, R-Boise, has taken over the powerful position of Senate President Pro Tempore from Sen. Brent Hill, R-Rexburg, who retired last year. Several committees will also have new chairmen, one locally notable one being the House Environment, Energy and Technology Committee, which among other things oversees Idaho National Laboratory-related matters and will be headed by Rep. Barbara Ehardt, R-Idaho Falls.

COVID-19 and the governor’s powerMany Republican lawmakers have criticized Little’s COVID-19 response as going too far and have said they want to curtail his powers to respond to a future emergency and require more legislative input. The House passed a resolution during the special session in August revoking his COVID-19 emergency declaration; the Senate didn’t take it up, but it did pass a resolution listing limits on the governor’s emergency powers they intended to pursue during the 2021 regular session. These included a constitutional amendment to let lawmakers call themselves into session and limiting the sort of shutdown or public health regulations the state, local governments and public health districts can impose in a future pandemic.

Little didn’t answer directly when radio hosts Neal Larson and Julie Kay Mason asked him Tuesday if he would veto such legislation. He did say that disasters declarations for floods, fires, earthquakes and other natural disasters are common and that every state and President Donald Trump issued one in response to COVID-19.

“We’re operating today under nothing more, nothing less than existing state law,” Little said. “Monday, the Legislature’s going to get up, (and) if they want to change state law, they have every right to go through that process that we talked about. Every state in the union is under an emergency order right now, and frankly, if you look at what the limitations are in Idaho, they’re much less than they are in even the surrounding states, let alone a lot of the other states.”

Rep. Chad Christensen, R-Ammon, who has been an outspoken critic of Little’s COVID-19 response, called his answers inconsistent and posted on Facebook on Tuesday he expects there to be a veto-proof majority in the 82% Republican Legislature to pass the bills. Christensen said he expects the session to be heated and that he plans to speak much more on the House floor this year than during his first term.

“The people of Idaho will hear me often this session,” Christensen wrote. “I will be speaking for them and their God-given rights. Despite what you may think, Governor Little, you have no authority to restrict my God-given rights and I will continue to ignore your ‘mandates.’ The majority of my constituents will also do the same. District 32 isn’t full of subservient people. We succeed and thrive without government involvement. We are freedom-loving Americans.”

{strong style=”font-size: 1em;”}Property taxes{/strong}Will this be the year Idaho does something about rising property taxes?

Lawmakers from both parties started the 2020 session saying this would be a major focus, but due to disagreements between the House and Senate, nothing ended up passing. They did, however, appoint a committee of lawmakers to study the issue some more, who in November recommended limiting local governments’ budget growth and ability to save money in reserves.

While both Republicans and Democrats have said they want to do something, Republicans like to focus on the role local government spending plays and call for restrictions on it, while Democrats tend to blame too-low state spending in areas such as education.

Local officials were mostly against the budget freeze proposal and have expressed concerns about what the Legislature might do this year. At a City Council work session shortly after the property tax study committee released its recommendations, Idaho Falls Mayor Rebecca Casper said she worries limiting city and county budgets could hurt residents, and wished lawmakers had gathered input from the leaders of the state’s biggest cities such as Idaho Falls.

“They would do well, as those who are studying this, to reach out to those top five cities in the state and talk to them a little bit about what their experiences are, what their needs are, what growth is like and how cities cope with the funds that they’ve been given, and why just simply cutting spending is not really reform, nor is it a solution to what ails property taxpayers,” she said.

At a news conference on Tuesday Sen. Grant Burgoyne and Reps. Lauren Necochea and John Gannon, all D-Boise, unveiled proposals to index the homeowner’s exemption to inflation; to increase the “circuit breaker” property tax break that benefits elderly homeowners, veterans and some people with disabilities; and to halve a property tax exemption enjoyed by Boise technology manufacturer Micron. The Legislature capped the homeowner’s exemption at $100,000 in 2016, which Democrats say has had the effect of shifting the tax burden from businesses onto homeowners as values rise.

“This was a huge win for lobbyists and a loss for regular Idahoans,” said Necochea, who was recently elected Assistant Minority Leader. “We are now seeing the impact play out in our property taxes.”

“If voters see more services than they want, then … they can vote for different local officials,” she said.