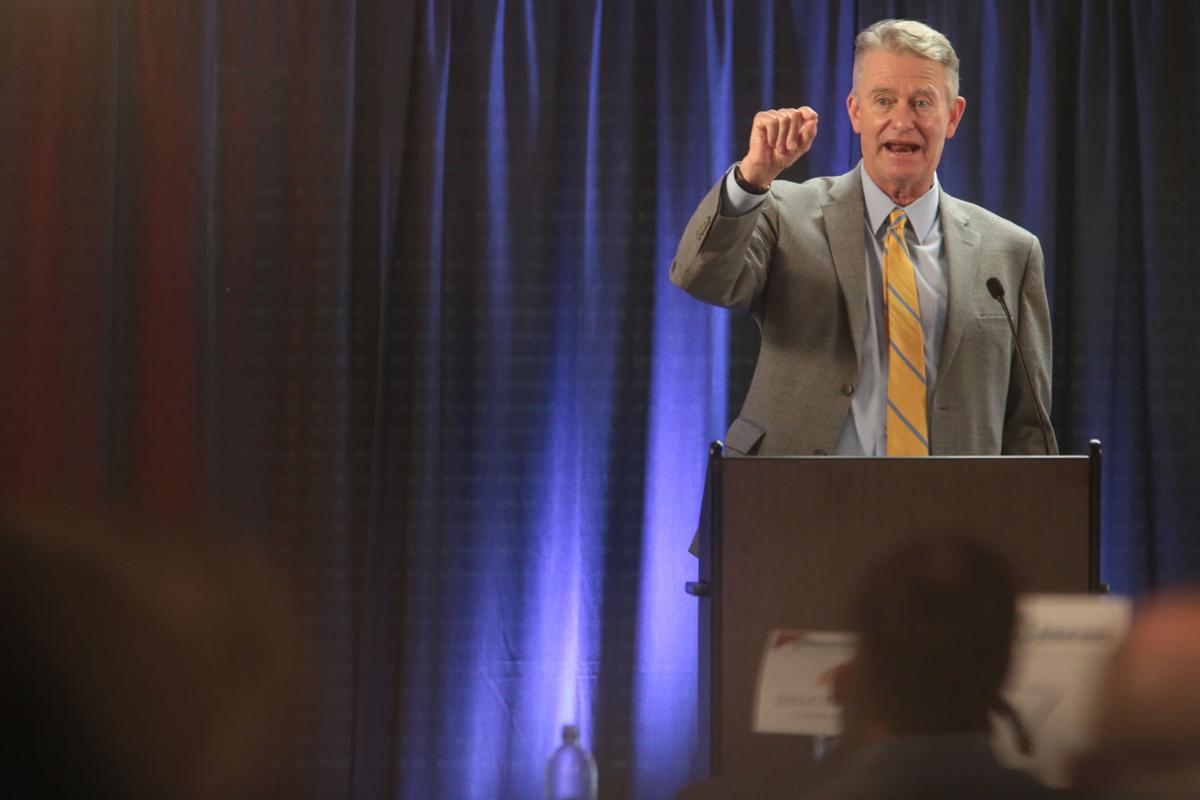 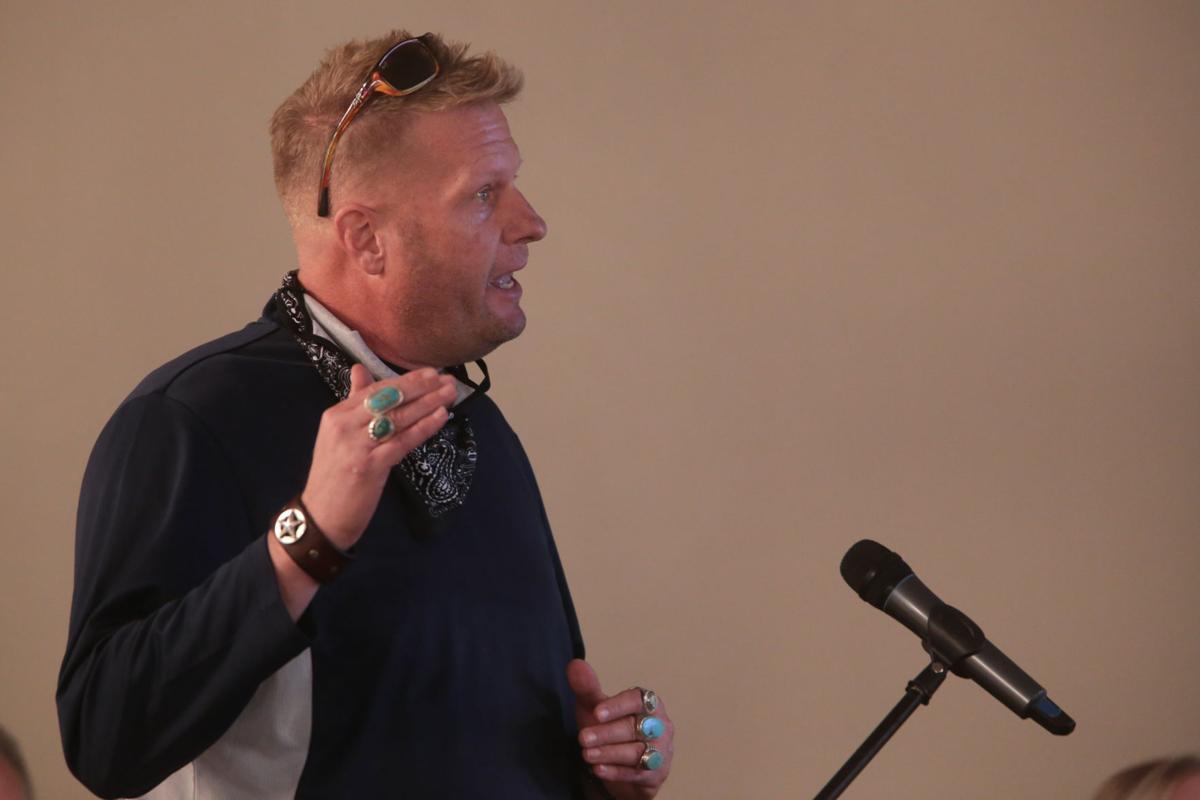 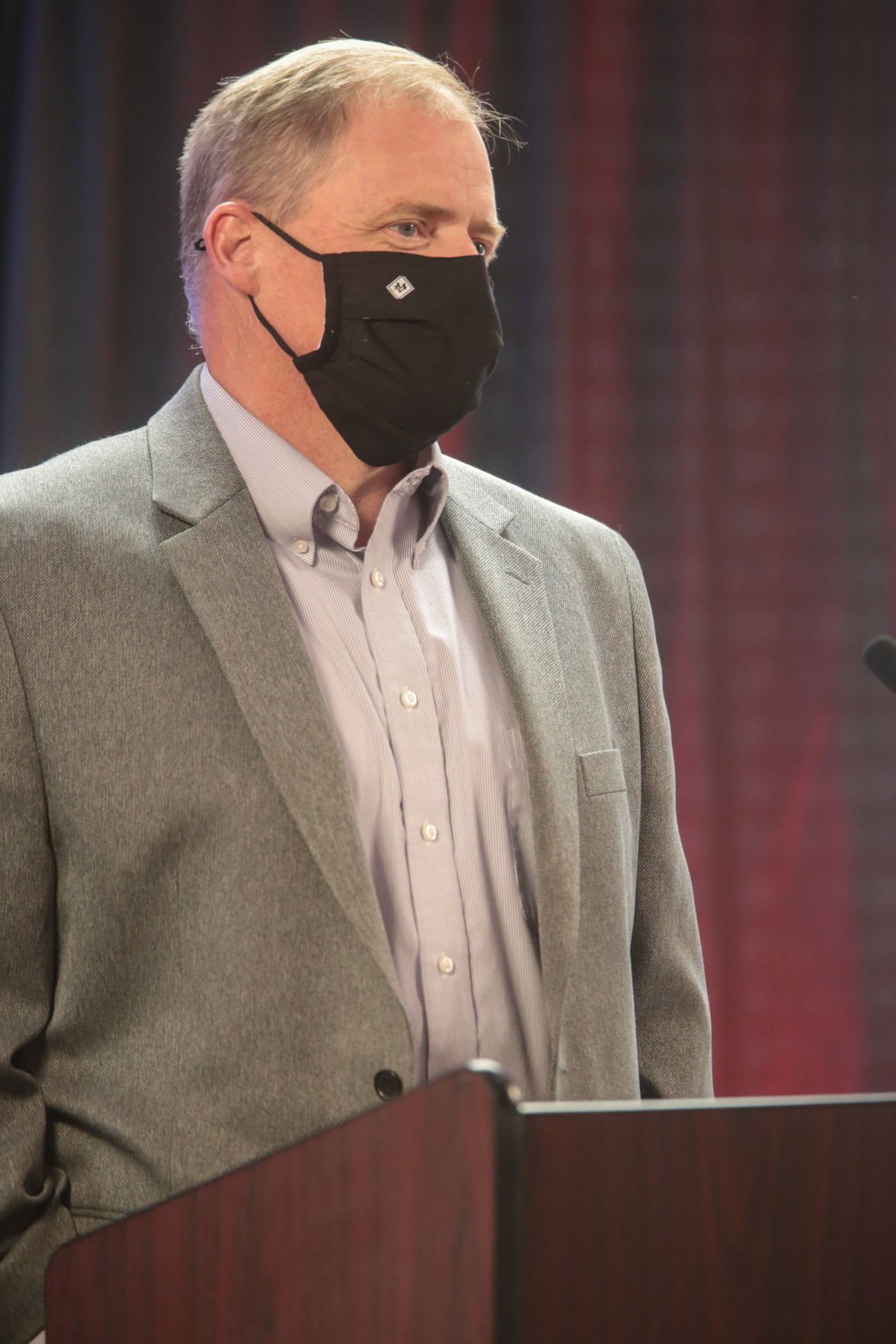 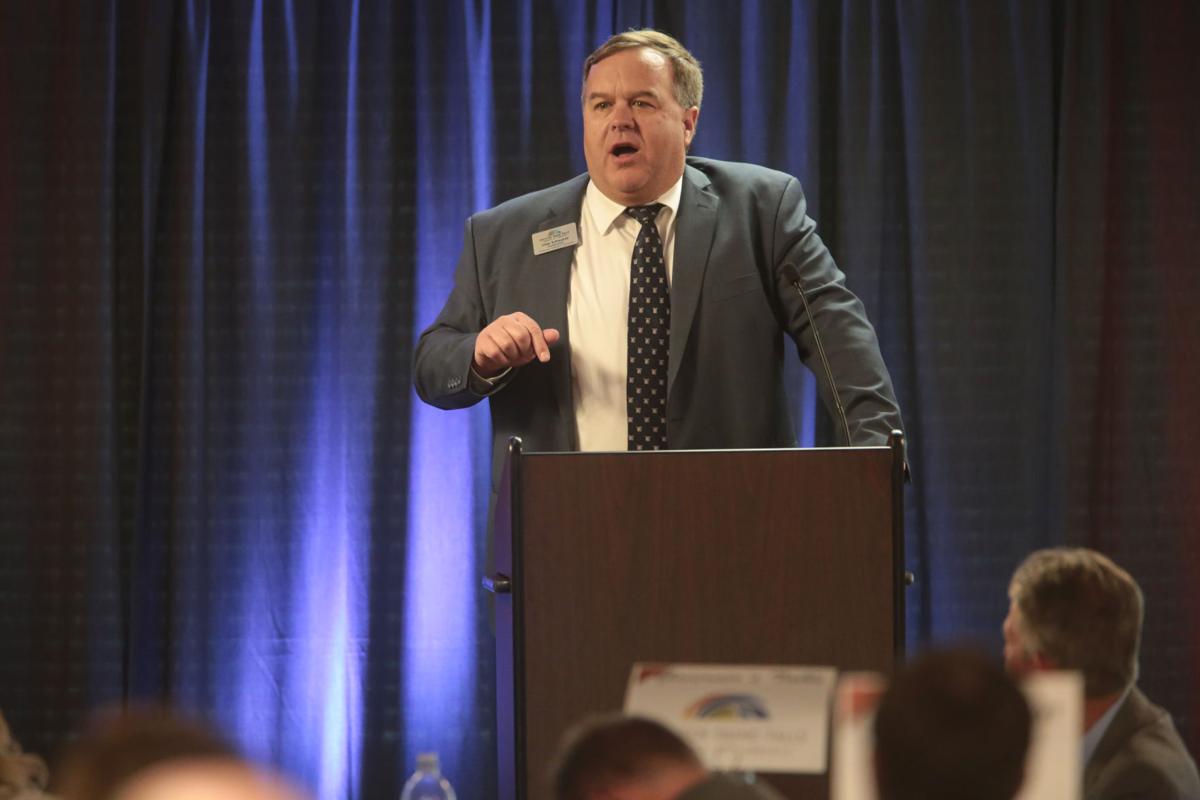 President and CEO of the Greater Idaho Falls Chamber of Commerce Chip Schwarze speaks to visitors during a chamber luncheon on Wednesday, Sept. 16, 2020.

President and CEO of the Greater Idaho Falls Chamber of Commerce Chip Schwarze speaks to visitors during a chamber luncheon on Wednesday, Sept. 16, 2020.

Gov. Brad Little defended his response to the coronavirus pandemic Wednesday, acknowledging some missteps and upcoming challenges but pointing to good budget and economic numbers as signs that his approach was largely successful.

"No action at all would not have worked here," Little told the crowd at the WestBank Convention Center, at a lunch put together by the Greater Idaho Falls Chamber of Commerce and sponsored by Mountain View Hospital.

Like governors in most states, Little issued a stay-home order in late March closing numerous businesses that were deemed nonessential in hopes of limiting the spread of coronavirus. He started a phased reopening in May, and since mid-June the state has been in Stage 4 of his reopening plan, meaning most businesses are open and most of the responsibility for measures to limit COVID-19's spread has been passed down to local health districts.

Little said Idaho is leading the nation in income growth and in state government fiscal solvency, and among the top states in the stability of its unemployment fund and the amount in the state's savings. He also touted his administration's use of the $1.25 billion in COVID-19 relief funds the state got from the federal government, pointing to his use of it to undo school budget cuts and shore up the unemployment fund and giving money to cities and counties to help pay police and firefighter's salaries in exchange for not raising property taxes next year.

"A lot of property taxpayers will be getting a 10 to 20% reduction, all things being equal, in their property taxes as a result of that," he said.

Little and Chamber CEO Chip Schwarze, who emceed the lunch, struck an optimistic tone. Schwarze said he was glad to be able to hold an in-person lunch.

"We're excited for this venue to be open again," Schwarze said.

However, Little did acknowledge that cases are high in some eastern Idaho counties. Bonneville County's caseload hasn't budged much since it spiked in late July, and this week Bonneville, Jefferson and Madison counties are hotspots in the state for new cases per capita. Eastern Idaho's caseload has risen rapidly since July, when a surge took hold that brought the region from a few hundred cases to around 3,500 now. Hospitalizations peaked in late August — with around two dozen coronavirus patients on a given day — and are slightly under those levels now.

Ned Hillyard, chief compliance officer at Mountain View and Idaho Falls Community hospitals, praised Little's response to COVID-19 and support for the health care community, even joking that his face should be carved onto Mount Rushmore.

Tyler Price, the owner of Lyle Amado Barbershop, had a different take. Price spoke to Little during a brief question-and-answer session after his speech, introducing himself as "nonessential" — barbershops and salons were required to close during the statewide shutdown from late March to mid-May. He asked Little about a statement he made in May that businesses that reopened early could put their licenses at risk. Price said he reached out to Little's office repeatedly during the shutdown but wasn't able to get clarification or speak to Little.

"I was offering help and your office was not willing to have a conversation," Price said.

"If you're in the salon or barber business, if you don't comply with Idaho sanitary systems today you could lose your license," Little said.

Price reopened his shop in late April, a few weeks before barbershops were supposed to under Little's staged reopening plan.

"We were all safe," Price said.

"You and I probably won't agree on that," Little replied.

In response to another question, Little said he doesn't plan to impose any statewide restrictions on gatherings in response to the upcoming holidays of Halloween, Thanksgiving and Christmas. Any such measures, he said, would have to be done locally.

Little said making sure schools can reopen is his top priority, and something he views as connected to restarting the economy and protecting public health and safety. He said his major upcoming concerns include the schools, the possibility of a bad flu season on top of coronavirus overwhelming health-care providers and the possibility of increased spread as the weather gets colder and people spend more time inside. Steps such as frequent hand-washing and using hand sanitizer are going to be as key as ever in the coming months, Little said.

"All those good practices you've heard us talk about over and over again are really important," he said.

Hello, and welcome to Campaign Notebook, where I will be summarizing political developments in the Gem State, and eastern Idaho in particular,…