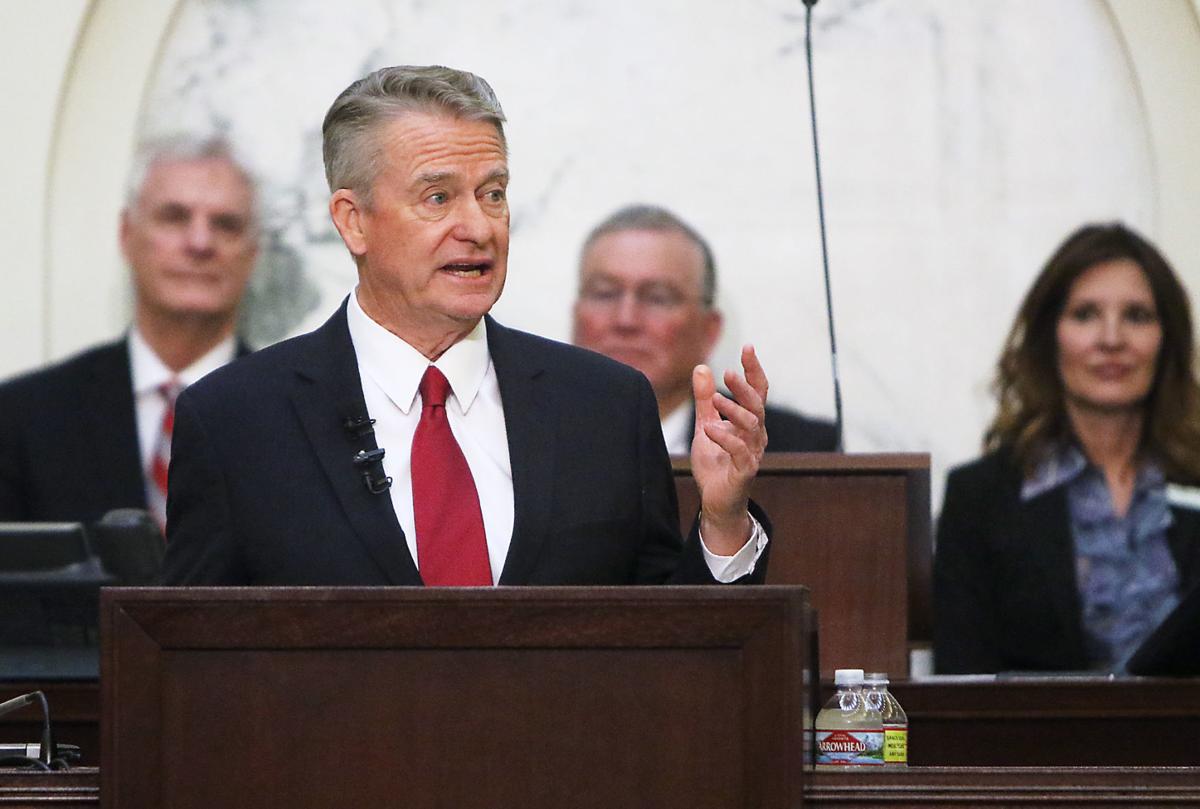 Gov. Brad Little delivers the annual State of the State address from the House chambers at the Idaho State Capitol on Monday. 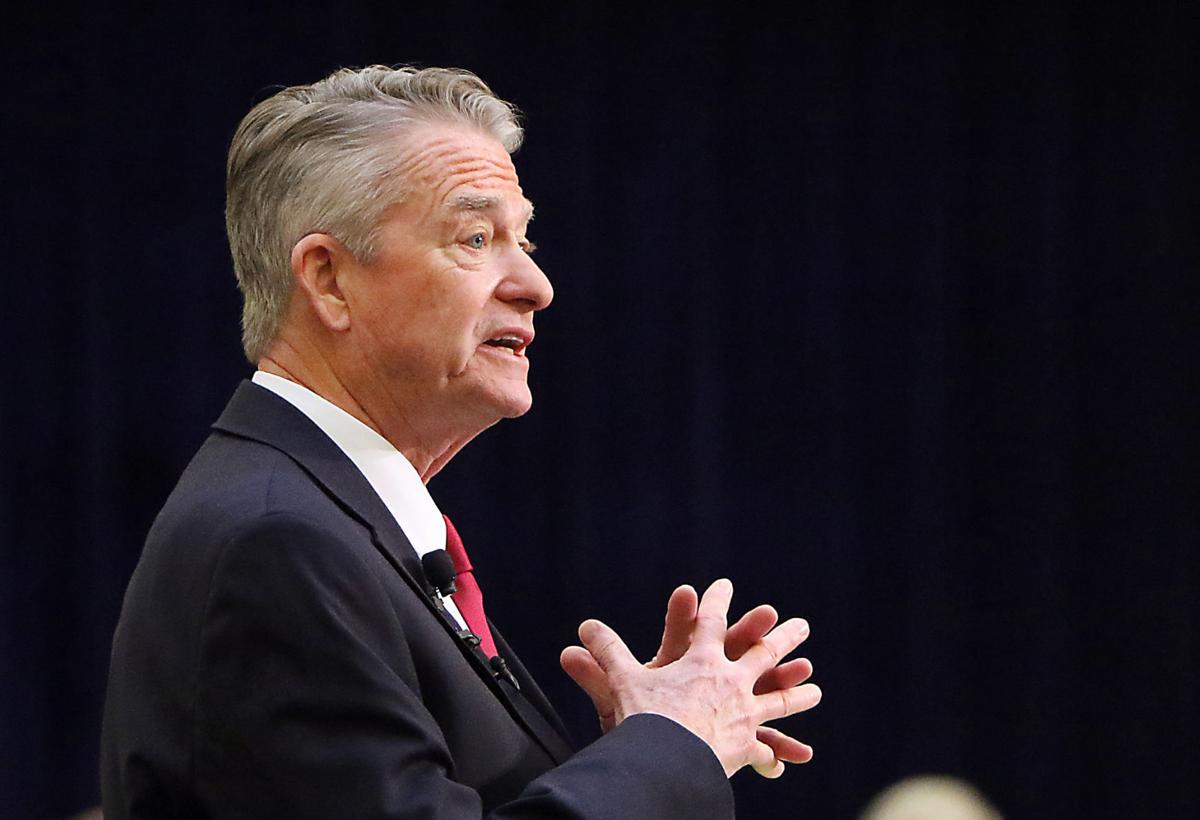 Gov. Brad Little delivers the annual State of the State address from the House chambers at the Idaho State Capital, Monday, Jan. 6, 2020. 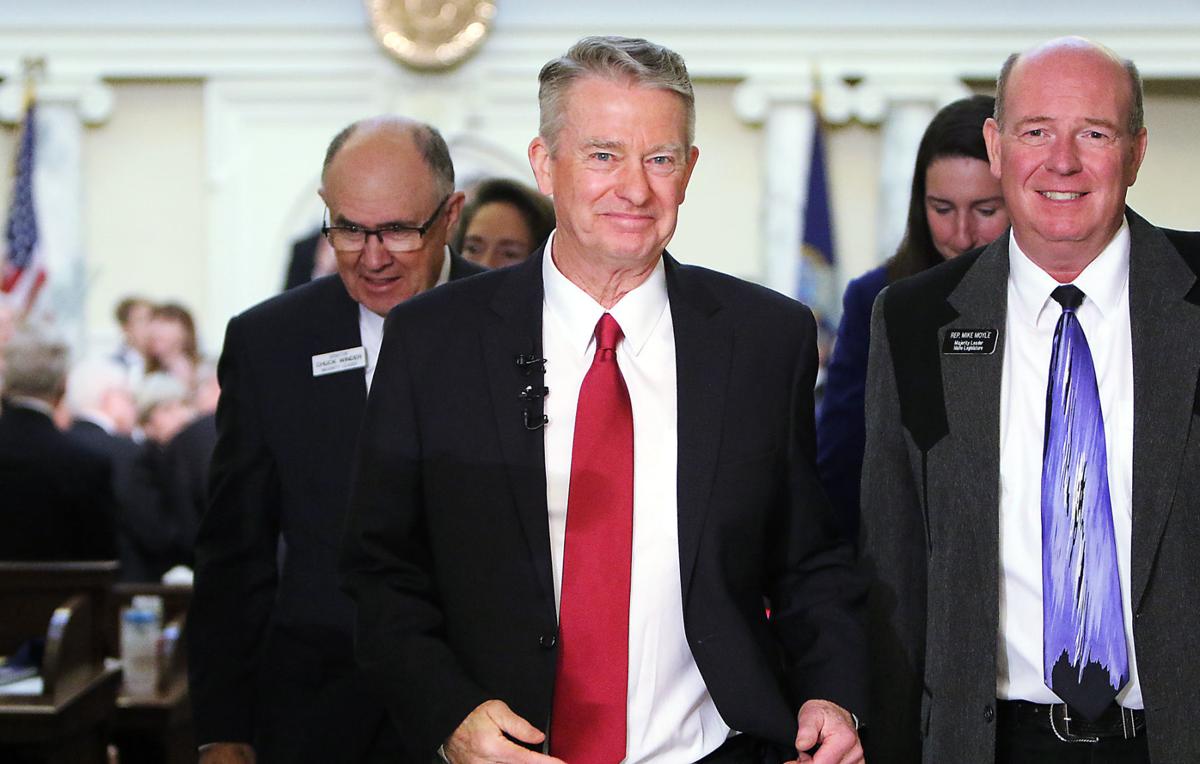 Gov. Brad Little, flanked by Sen. Chuck Winder and Rep. Mike Moyle, walks from the House chambers after delivering the annual State of the State address at the Idaho State Capital, Monday, Jan. 6, 2020. 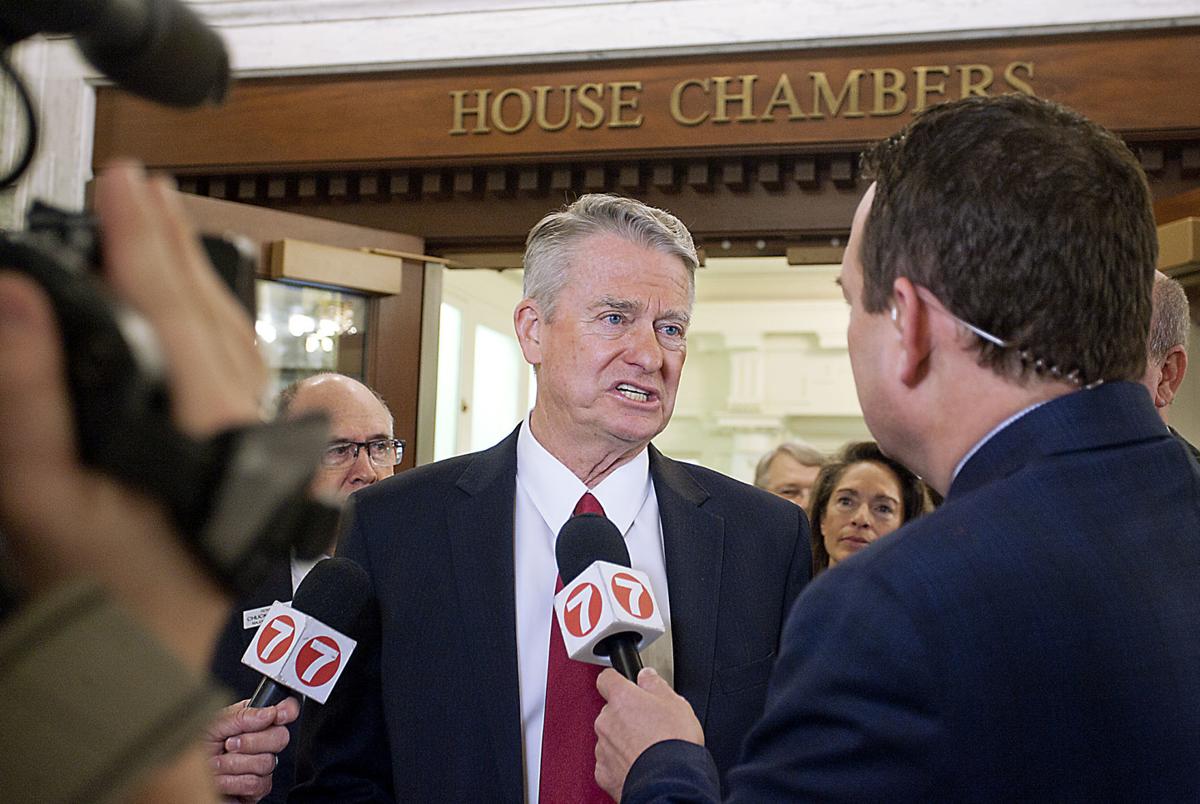 Gov. Brad Little speaks with members of the media outside the House chambers after delivering the annual State of the State address at the Idaho State Capital, Monday, Jan. 6, 2020.

Gov. Brad Little delivers the annual State of the State address from the House chambers at the Idaho State Capitol on Monday.

Gov. Brad Little delivers the annual State of the State address from the House chambers at the Idaho State Capital, Monday, Jan. 6, 2020.

Gov. Brad Little, flanked by Sen. Chuck Winder and Rep. Mike Moyle, walks from the House chambers after delivering the annual State of the State address at the Idaho State Capital, Monday, Jan. 6, 2020.

Gov. Brad Little speaks with members of the media outside the House chambers after delivering the annual State of the State address at the Idaho State Capital, Monday, Jan. 6, 2020.

BOISE — Gov. Brad Little delivered his second State of the State speech Monday, promising to boost education funding and increase the number of prison beds while taking some new efforts to help prevent parolees from re-offending. He also outlined his proposals to pay for Medicaid expansion and partially fund the repeal of the sales tax on groceries.

“I subscribe to the view that it is better to prepare children today than to repair them later,” Little said.

Little’s overall proposed general fund increase of 3.75 percent is the smallest since the 2014 fiscal year, said Division of Financial Management Administrator Alex Adams. It would make permanent spending cuts Little demanded from every agency except schools late last year, leave a $61 million balance at the end of the 2021 fiscal year as a cushion in case of a recession and boost the state’s rainy day funds by $102 million.

“My budget leaves an appropriate cash balance and shores up our rainy day funds, which have helped us weather economic storms that forced other states to raise taxes,” Little said.

Eastern Idaho-specific items include $6 million to build career technical education facilities in several places, including at the College of Eastern Idaho, and $1.3 million to create 25 new medical residencies in eastern Idaho. Little wants to spend $1 million on a new cybersecurity degree program at Boise State University, Idaho State University and the University of Idaho that would partner with employers such as Idaho National Laboratory. And Little talked up an addendum to the 1995 Settlement Agreement between the state and the U.S. Department of Energy that has set some new cleanup deadlines and created a path to bring small amounts of spent nuclear fuel to INL for research.

Little’s proposal to cover the state’s $41 million in matching funds for the first full year of Medicaid expansion would repurpose $8.5 million that counties could save on indigent health care spending, with the state making up the rest through a mix of savings elsewhere and Millennium Fund money. It does not outline how that $8.5 million would be apportioned among counties.

“There’s going to be a policy discussion,” Adams said.

House Speaker Scott Bedke, R-Oakley, said he likes that it wouldn’t require new general fund spending, which he said would have been a non-starter for House Republicans. Rep. Chris Abernathy, D-Pocatello, said the state should pay for it all.

“Funding Medicaid expansion at the state level helps to protect public services offered at the city and county levels while also protecting against an uninsured gap population,” he said.

Little is proposing taking at least $35 million in revenue the state has taken in from internet sales tax collections and apply it toward reducing the sales tax on groceries, although the details must be worked out.

“I think he’s putting his emphasis on the most important things,” Hill said.

Rep. Gary Marshall, R-Idaho Falls, said he backs raising teacher pay, although he isn’t yet sure what the best approach would be. Bedke said he might prefer an approach to raising teacher pay that gives school districts more flexibility in how to spend the money. But, he praised Little’s early childhood literacy focus.

“I think no one can criticize the need for increased investment and increased emphasis put on the literacy programs in the state of Idaho,” Bedke said.

Completely repealing both the grocery sales tax and the grocery tax credit would cost the state about $113 million, Bedke said, or far less than the $35 million Little has earmarked for it. Possibilities include raising the credit, removing it from certain types of food, reducing the rate or starting a phased-in elimination of the tax, Hill said. However, not all lawmakers are on board.

“I don’t think we have enough money right now to scrap grocery tax personally,” Marshall said. “In some ways, grocery tax is a fair tax,” noting that everyone contributes.

Unmentioned in Little’s speech was cutting property taxes, something the Republican leadership said will be a priority for them this session. House Majority Leader Mike Moyle, R-Star, blamed rising local budgets, saying that if lawmakers don’t act people could force them to with an initiative.

“The problem is when you start talking about it, the cities and counties have a fit and a lot of legislators are afraid to push back on them,” Moyle said.

Democrats said the state cutting taxes while pushing expenses onto local governments is the problem.

“We think by far the bigger culprit is the state’s failure to fund education and other critical needs at the state level where it should be funded,” said House Minority Leader Ilana Rubel, D-Boise.

The proposed spending increase for the Idaho Department of Correction, at 12 percent, is the biggest of any of the major agencies. It includes $5.9 million for a new program to target about 2,000 of the parolees and probationers who are at the highest risk of re-offending.

“Two-thirds of Idaho inmates are in prison because of probation and parole violations — more than any other state in the country,” Little said. “Idaho taxpayers pay $110 million per year to incarcerate this population. This is a taxpayer issue as well as a public safety issue.”

The budget includes money for 806 new prison beds — 160 at a new community reentry center in Twin Falls expected to open in October, 146 at Idaho State Correctional Institution and 500 new out-of-state beds. As of Monday, 9,426 people were imprisoned by the Idaho Department of Correction, including 834 being held in county jails and 651 at a private prison in Texas.

Bedke said he would prefer to house inmates in Idaho. He said an “all of the above” solution is needed, including more beds, changing sentencing laws and improving the parole system. Rubel said Idaho probably needs more prison beds in the near-term, but that the state needs to change some sentencing laws to reduce the number of people in prison. And she said any new beds should be in Idaho. But she praised Little’s proposal to strengthen the parole system.

“I’ve spoken to many families that are going broke, taking out loans literally to visit their families in Texas,” she said.

BOISE — After Gov. Brad Little ordered Idaho state agencies — other than K-12 public schools — to outline plans to cut 1 percent from their cu…