NuScale Power’s simulator for the reactors’ control room, located at NuScale’s offices in Corvallis, Ore., is shown in this photo. By using the digital controls, operators can control how much power is generated and respond to any changes or alerts in the system.

One of the 12 small modular reactors could go live by 2026, if approved by the federal Nuclear Regulatory Commission. 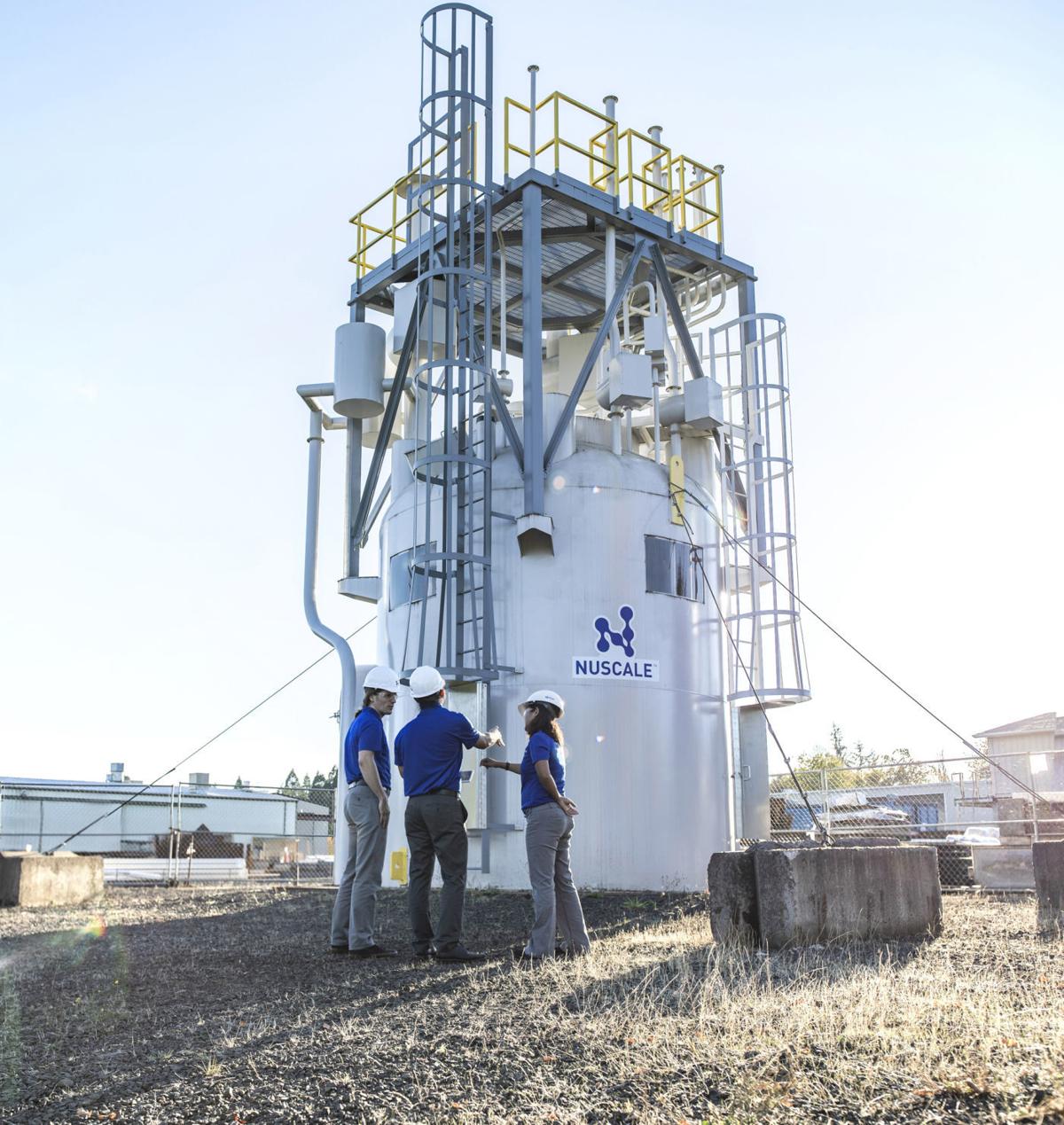 A life-size mockup of part of a NuScale power module just outside of Corvallis, Oregon. 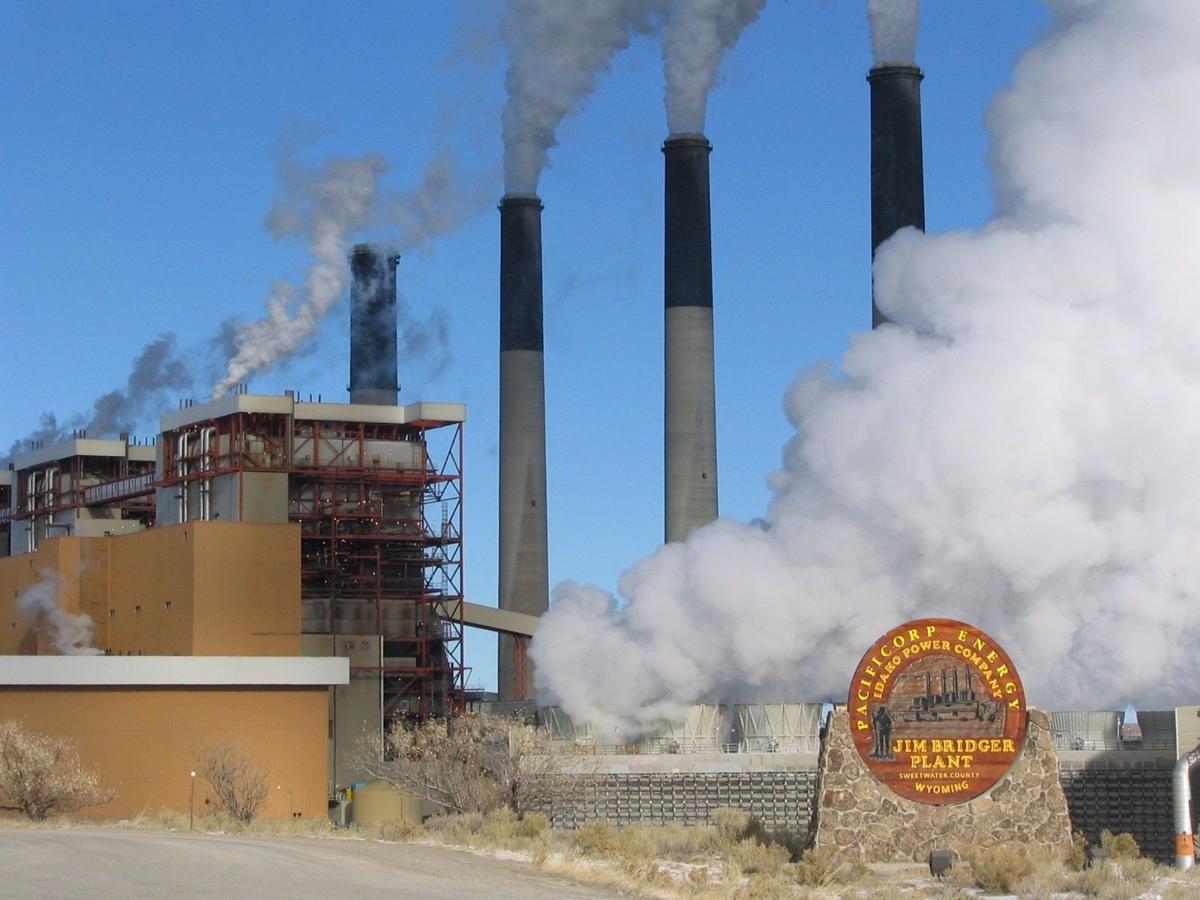 In this Nov. 29, 2006 file photo, steam rises from the huge boiler units at the Jim Bridger Power Plant east of Rock Springs, Wyo. A utility company is considering early retirement for one Wyoming coal-fired power plant and part of another to keep down costs.

NuScale Power’s simulator for the reactors’ control room, located at NuScale’s offices in Corvallis, Ore., is shown in this photo. By using the digital controls, operators can control how much power is generated and respond to any changes or alerts in the system.

One of the 12 small modular reactors could go live by 2026, if approved by the federal Nuclear Regulatory Commission.

A life-size mockup of part of a NuScale power module just outside of Corvallis, Oregon.

In this Nov. 29, 2006 file photo, steam rises from the huge boiler units at the Jim Bridger Power Plant east of Rock Springs, Wyo. A utility company is considering early retirement for one Wyoming coal-fired power plant and part of another to keep down costs.

The utilities involved in plans to build 12 small modular reactors west of Idaho Falls hope the new power source will help them weather changes as coal plants close and the demand for the hydroelectric power the city of Idaho Falls depends on grows.

Coal accounts for 24 percent of the overall energy mix now for the 47 cities part of the Utah Associated Municipal Power Systems. Thirty percent of UAMPS’ energy is hydroelectric and 14 percent comes from natural gas, with wind, solar, geothermal and waste heat accounting for lesser amounts.

However, this won’t last forever. Two coal plants UAMPS members depend on will be shutting down soon, and another, Intermountain Power Plant in Delta, Utah, is converting to natural gas.

“If everyone follows their plans there’s not going to be much coal left in the West running,” Idaho Falls Power General Manager Bear Prairie, who is also chairman of the UAMPS Carbon Free Power Project, said in an interview in July.

San Juan Plant Unit 4, part of the Four Corners Generating Station near Fruitland, N.M., is expected to shut down in 2022, said UAMPS spokesman LaVarr Webb. And while the Hunter II Power Plant near Castle Dale, Utah, has not yet announced a shutdown date, Webb said it is expected to around 2028-2030. Other coal plants in the region that may reduce their capacity or close in the coming years include the North Valmy Generating Station in Nevada, the Centralia Power Plant in Washington and the Jim Bridger plant in Wyoming, according to numerous local news reports.

Webb said the project will “complement and enable higher levels of renewable resources because it can act as a stable, flexible backup when the sun doesn’t shine and the wind doesn’t blow.”

NuScale Power, an Oregon-based company that was founded in 2007 for the purpose of developing small modular reactors, is working with UAMPS, the U.S. Department of Energy and Idaho National Laboratory on the project. The Nuclear Regulatory Commission is reviewing the proposal now, and the reactors are expected to be operational by the mid-2020s. The reactors, which will produce 720 megawatts of power between them, will be built on the DOE desert site west of Idaho Falls; Webb said UAMPS and INL were “zeroing in on a specific site” but weren’t ready to announce it yet.

Idaho Falls is one of UAMPS’ biggest members — the city’s peak electric load is about 145 megawatts out of a total UAMPS load of 750 to 800 megawatts, Prairie said. And its energy portfolio looks different than many other members. The city gets about 60 percent of its electricity from the Bonneville Power Administration, which markets power from its system of hydroelectric dams in the Columbia River watershed. However, the city’s contract is up in 2028, and while the demand for power is growing both in Idaho Falls and the region, the amount of power being generated by those dams isn’t. This, Prairie said, is likely to lead to there being less power available for Idaho Falls at that time.

“As loads grow in the Northwest, our proportional share of that is going to shrink,” Prairie said.

Idaho Falls, unlike many of the more coal-dependent UAMPS members in Utah, has an entirely carbon-free energy portfolio right now, and Prairie said city officials want to keep it that way. That is another one of the advantages of the SMR project for the city, he said.

“It made sense from that perspective and at a price that’s as good as the next available option,” Prairie said.

And, Prairie said, UAMPS is planning for a future where carbon emissions could be more heavily regulated. California and Washington both have state-level emissions regulations, and stricter federal regulations are, depending on a host of political factors, at least possible at some point in the near future.

“If 10 years from now there’s a federal carbon tax, we’re protected with” the reactors, Prairie said.

So far 35 UAMPS members have committed to receiving some power from the small modular reactor project, mostly cities in Utah but also a few others in Idaho, Nevada, California and New Mexico. As well as Idaho Falls, the Lost River Electric Co-op in Mackay and the Salmon River Electric Co-op in Challis are part of it. Idaho Falls has committed to receiving 10 megawatts of power from the base project, and is looking at taking over one of the reactors in the 2030s after DOE is done using it for research, which would bump the city’s share a few megawatts more. The agreed-on rate is a maximum of $55 per megawatt, which Prairie said was chosen to be competitive with natural gas prices.

Prairie stressed in an interview last month and at a public informational meeting a week ago that Idaho Falls taxpayers and ratepayers are not at risk if the project falls through. The city can drop out at any time, he said.

“(NuScale is) going to take all that risk, and DOE and those entities,” Prairie said at the meeting. “I’m not going to put that risk on Idaho Falls.”

DOE awarded the company $226 million to develop the reactors in 2013, part of a public/private partnership to which NuScale contributed $296 million. NuScale and UAMPS got $63 million from DOE in 2015 to help support siting and licensing, which the two entities matched with a combined $63 million of their own. DOE’s Office of Nuclear Energy gave NuScale another $91 million in 2018, for SMR demonstration work, with NuScale chipping in another $69 million.

NuScale has been touting the international interest it has been getting in the project. Company officials said at a Leadership in Nuclear Energy Commission meeting in May that they have been contacted by two entities in Canada, one in Romania and one in Jordan that want to be the second place after eastern Idaho to host some of the small reactors. The company also is working with the Tennessee Valley Authority on a similar project near Oak Ridge, Tenn. The potential for making so much money down the road, Prairie said, makes it worth it for them to pay for the reactors’ development.

“That’s a huge benefit to them,” he said. “They’re a private company, they’re going to make a lot of money.”