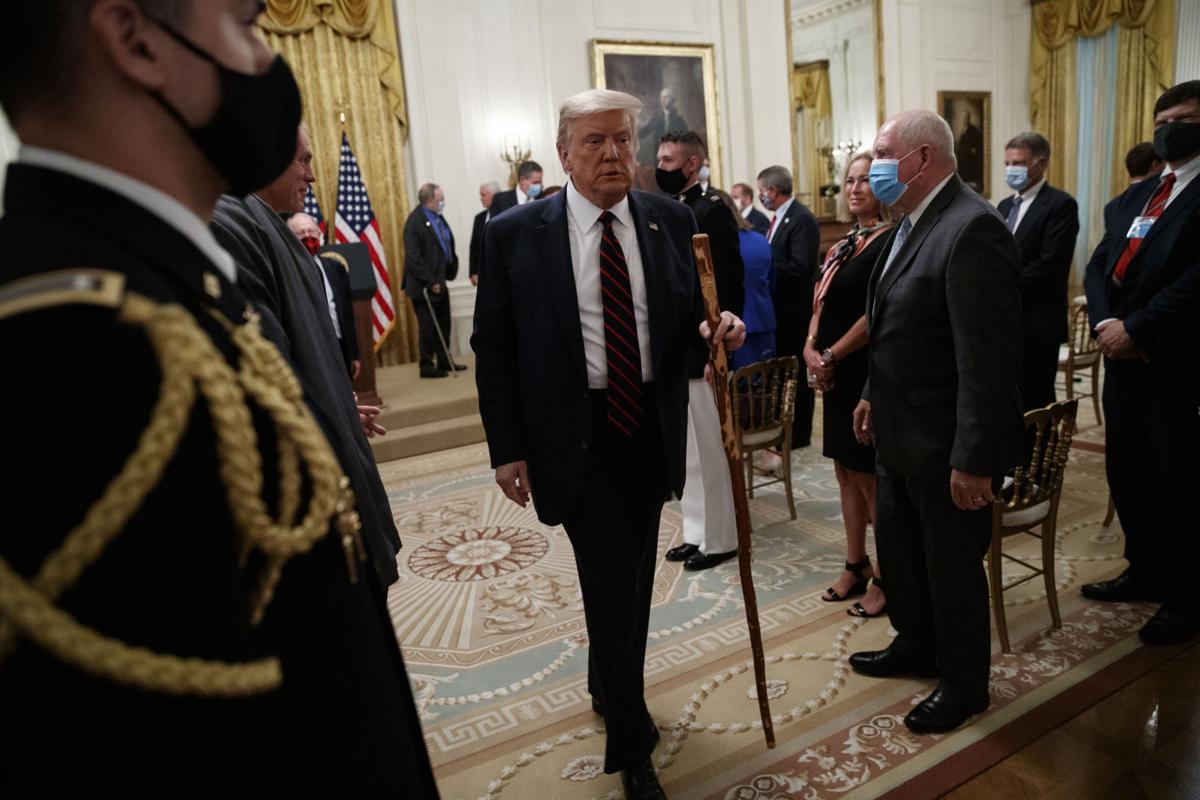 President Donald Trump departs carrying a walking stick given to him by Sen. Lamar Alexander, R-Tenn., after a signing ceremony for H.R. 1957 — “The Great American Outdoors Act” — in the East Room of the White House on Tuesday in Washington. 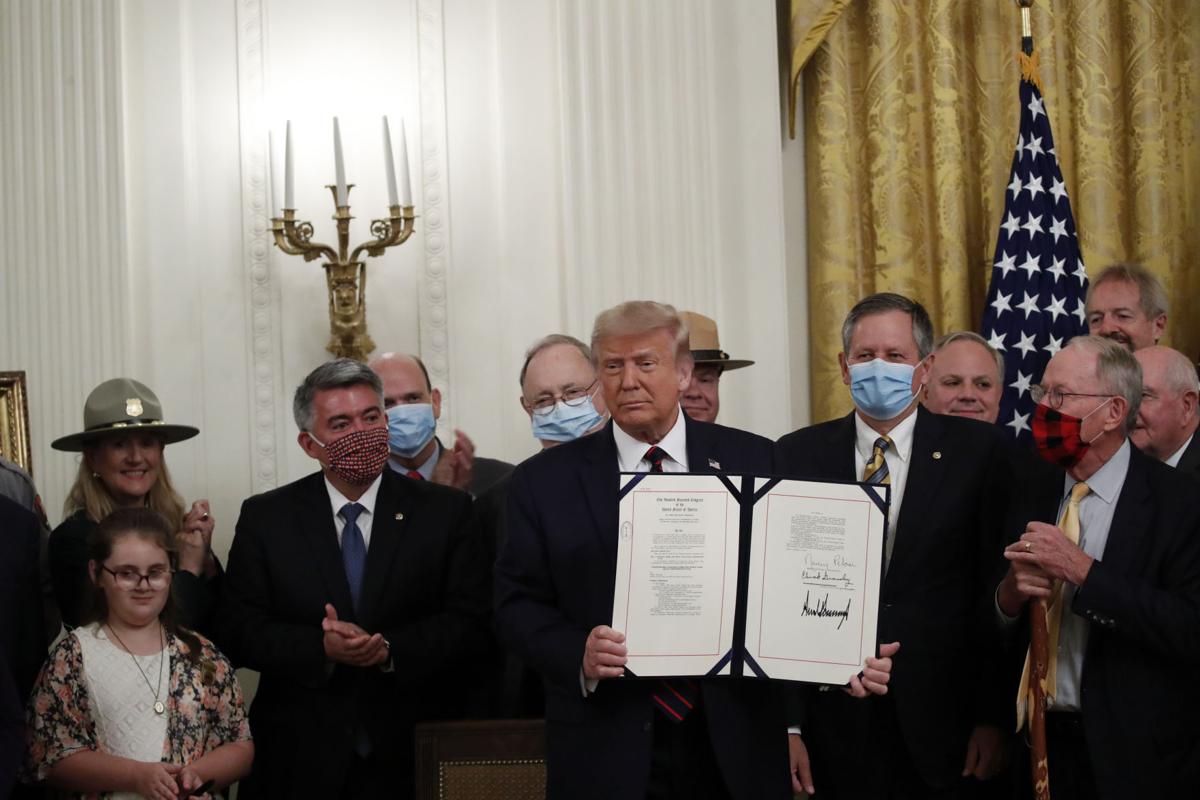 President Donald Trump poses for a photo during a signing ceremony for H.R. 1957 – “The Great American Outdoors Act,” in the East Room of the White House, Tuesday, Aug. 4, 2020, in Washington. 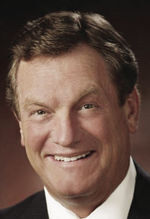 President Donald Trump departs carrying a walking stick given to him by Sen. Lamar Alexander, R-Tenn., after a signing ceremony for H.R. 1957 — “The Great American Outdoors Act” — in the East Room of the White House on Tuesday in Washington.

President Donald Trump poses for a photo during a signing ceremony for H.R. 1957 – “The Great American Outdoors Act,” in the East Room of the White House, Tuesday, Aug. 4, 2020, in Washington.

A bill to permanently fund the Land and Water Conservation Fund, a longtime priority of U.S. Rep. Mike Simpson, is now law.

President Donald Trump held a signing ceremony at the White House on Tuesday to sign the Great American Outdoors Act, which will guarantee real funding for the Land and Water Conservation Fund of $900 million a year using money from oil and gas revenues on federal lands. Although $900 million is the current authorized funding level, in years past Congress has usually diverted some of the money to other purposes.

The fund helps to pay for federal, state and local government land purchases.

“This is a very big deal,” Trump said. “From an environmental standpoint, and just a beauty of our country standpoint, there hasn’t been anything like this since Teddy Roosevelt, I suspect.”

The bill also will put another $1.9 billion per year toward improvements at national parks, forests, wildlife refuges and rangelands and authorizes $9.5 billion for maintenance over five years. Simpson, a Republican who represents eastern and south-central Idaho, has been pushing for several years to address the maintenance backlog on federal lands. The bill Trump signed Tuesday, which Simpson introduced with a group of bipartisan co-sponsors in June, was based on one Simpson originally introduced in 2017.

“This is truly a historic day for public lands in the country,” Simpson said in a statement after the vote. “This legislative effort has been a long journey dating back to when I first wrote the LAND Act. It is so gratifying to see this framework embraced in a bipartisan manner under the banner of the Great American Outdoors Act, and I thank the President for making this idea the law of the land. In Idaho, we are blessed with amazing public lands and this legislation will ensure that future generations will be able to enjoy them as we have.”

The bill was supported by both Democrats and Republicans and by conservation groups such as the Rocky Mountain Elk Foundation and the Idaho Conservation League. While the bill may have been bipartisan, Tuesday’s signing ceremony was not. A spokesperson for U.S. Sen. Joe Manchin, D-W.Va., who co-sponsored the bill in Senate, told the news website The Hill that he and other Democrats weren’t invited, and only Republican lawmakers were present.

U.S. Sen. Cory Gardner, R-Colo., who also co-sponsored the bill, spoke at the signing ceremony, thanking several of his colleagues from both parties by name and called it the most significant bill Congress has passed in more than 50 years. He said President Theodore Roosevelt would be proud to know 100 years later that his legacy of conservation is being protected for another 100 years.

“This will stop Congress from stealing the money they have for decades and put it back into our national parks for decades to come,” he said.

Simpson was the only member of Idaho’s delegation to support the bill, which passed the House on a 310-107 vote and the Senate 73-25. All of the Senate “No” votes were Republicans, while in the House it was opposed by 104 Republicans (about 54% of the Republican caucus), two Democrats and Libertarian Rep. Justin Amash of Michigan.

U.S. Rep. Russ Fulcher, who represents western and northern Idaho, said on the House floor last month he is concerned about the national debt and about increasing the amount of federally owned land in Idaho, noting that about two-thirds of Idaho is federally owned now, which means less property tax revenue and more dependence on government programs.

“I spend a lot of time in the rural counties of Idaho,” he said. “Residents and local governments understandably have serious concerns regarding additional federal land acquisition, especially at a time when federal resources are stretched so thin. The federal government doesn’t have the resources to manage the land and are often prevented from having local involvement. Translation: More federal land equals less land being intelligently managed, and often more wildfire.”

U.S. Sens. Mike Crapo and Jim Risch expressed similar concerns when the Senate passed the bill in June, saying they had concerns about buying more federal land and about state and local input and that any new money should go to maintaining existing lands.

Idaho’s national forests have a $528 million maintenance backlog, according to the Idaho Conservation League. The Nez Perce-Clearwater and Idaho Panhandle forests in North Idaho, the ICL said, lead the nation in backlogs, ranking first and second at $144 million and $141 million, respectively.

“These investments will create thousands of jobs for Idahoans impacted by the pandemic, improve public access, and protect water quality,” according to a news release from the ICL last month. “To boot, it will create career paths for Idahoans who are entering a challenging job market.”

The Land and Water Conservation Fund, the ICL said, has been used to support many projects in Idaho, including protecting lands in the Sawtooths and at Craters of the Moon National Monument and Preserve and paying for land buys that support salmon and steelhead recovery efforts.

The Great American Outdoor Act, the biggest change to American public lands in decades, is heading to President Trump's desk.